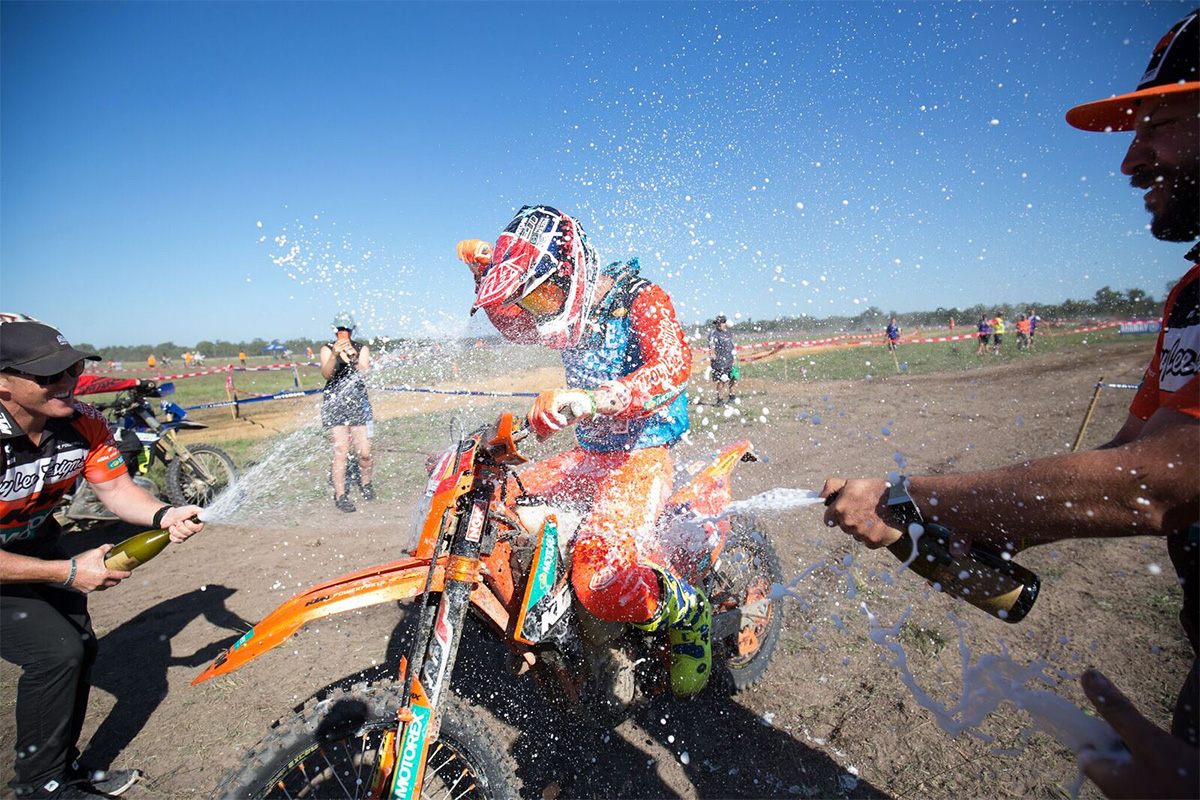 Milner has been the fastest man over the first three days and day four was no different, clinching his first final moto and his first E3 Australian Title. Daniel Sanders return to Australia has gone from strength to Strength, clinching the E2 title and taking out the final moto. The evolution of Luke Styke, Motocross rider turned Enduro rider has taking another step forward after he clinched the E1 title with his final moto win on day four.

Coming into day four there were many riders in the field feeling the effects of a tough first three days, but a 45km trail ride and the all important final moto was what stood between the riders and the finish line. The final moto was held at Cessnock Racecourse, a wide grass track was what faced the riders as they battled the 2.1km long course for five laps.

E3
Daniel Milner came into the final day of the A4DE with one objective in mind, to take out his first final moto. Milner accomplished that and looked to be in a class of his own as he navigated his way around the rough and tough final moto, winning with a time of 12:17.949. Lachlan Stanford continued his consistent form over the A4DE, coming in second place with a time of 12:38.829 but just couldn‰Ûªt find the speed to hang with Milner. Tom Mason jumped up onto the podium in the final moto after being around the mark for the entire A4DE, stopping the clock at 12:47.623.

Milner was overjoyed to take out A4DE title number five. ‰ÛÏYeah it feels incredible, got a decent holeshot on the 500 and put my head down and my bum up and just tried to put some good lap times together," Milner explaiend. "That track was so rough though but to clinch my fifth four-day title, that don‰Ûªt get any easier and this has been a hard four days, but I‰Ûªm stocked to wrap this up. It‰Ûªs my first Australian E3 title so I may have to buy this bike and put it in the trophy room,‰Û 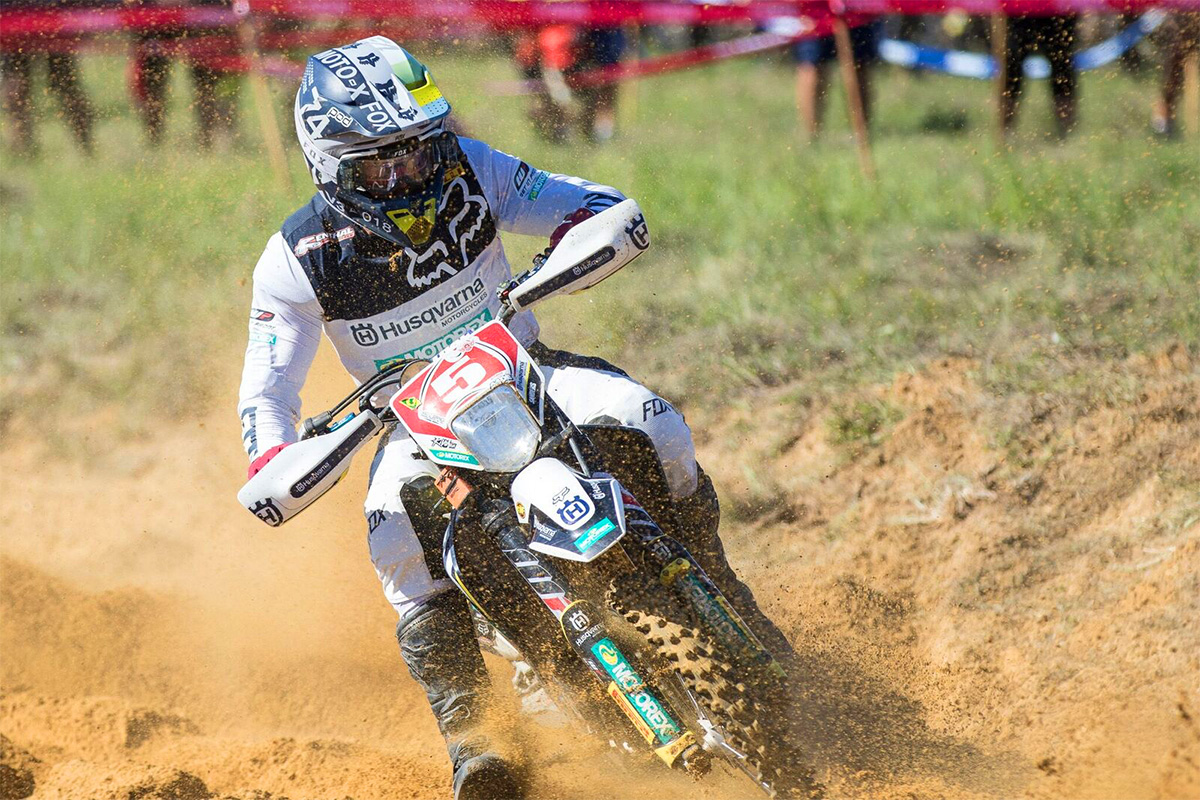 Victorian Daniel Sanders battled the final motocross stage out with Josh Green before taking the win and the E2 class. Photo: John Pearson Media
E2
The battle for the win in the E2 final moto had everyone at the Cessnock Racecourse eyes glued to the track, as Active8 Yamaha Yamalube‰Ûªs Josh Green got the holeshot. Sanders came from sixth at the first corner to be in second by corner number two, and the pair then checked out from the rest of the pack. Green held Sanders off for the first four laps as the Husqvarna rider through everything he had at Green to make the pass, but on lap four Sanders made the move. The pair continued to go back and fourth before sanders put a bit of breathing room between himself and Green, picking up the final moto and sweeping the E2 class with a time of 12:31.901. Green had to settle for second in what was the race of the day, stopping the clock at 12:33.410. Wil Ruprecht was the last man on the podium picking up third place with a time of 12:51.545 and putting his injured shoulder to the test on the rough Cessnock Racecourse circuit.

Sanders was stocked to wrap up the E2 title at Cessnock; ‰ÛÏI battled behind Greeny for a bit and then made my move and it‰Ûªs a great start to the year with the new team. The E2 win is awesome and if you would have told me I would be in this position last year I definitely would have taken it any day of the week,‰Û 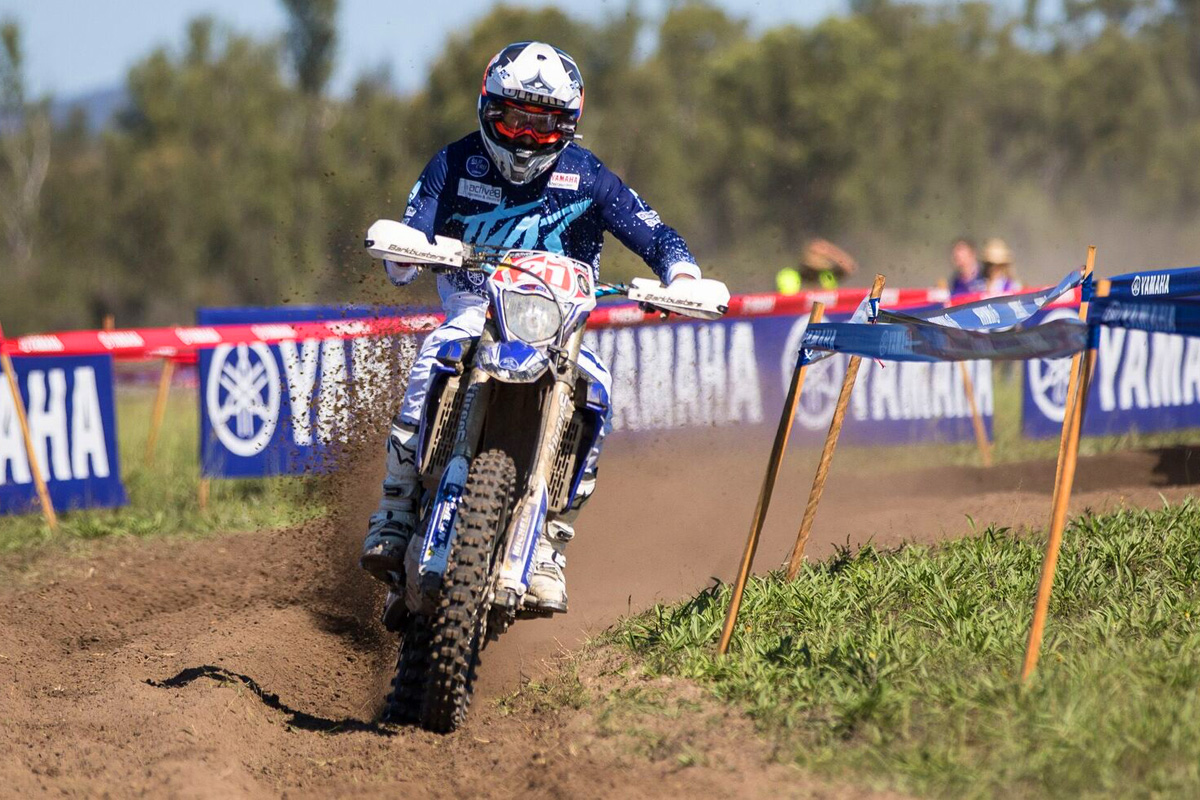 Former motocross star Luke Styke had pulled off the win in the E1 class in his first attempt. Photo: John Pearson Media
E1
Luke Styke showed his motocross experience on day four as he led the final moto from start to finish, grabbing the holeshot Styke didn‰Ûªt look back finishing with a time of 12:23.642. Jack Simpson aboard his KTM sat on the back wheel of Style throughout the five laps, but just couldn‰Ûªt make a move to take the lead clocking a time of 12:29.069. The pair gapped the field early in the final moto and battled it out. Frenchman Jeremy Carpentier put in a good final moto, claiming the last spot on the podium in his first A4DE aboard his Yamaha, finishing with a time of 12:50.202.

Styke was thrilled to win his first A4DE; ‰ÛÏIt was good, I got into a good position of the start and I knew a good start was important as the track was a one-line track. I rode a smart race and didn‰Ûªt want to throw anything away and it was a good moto,‰Û 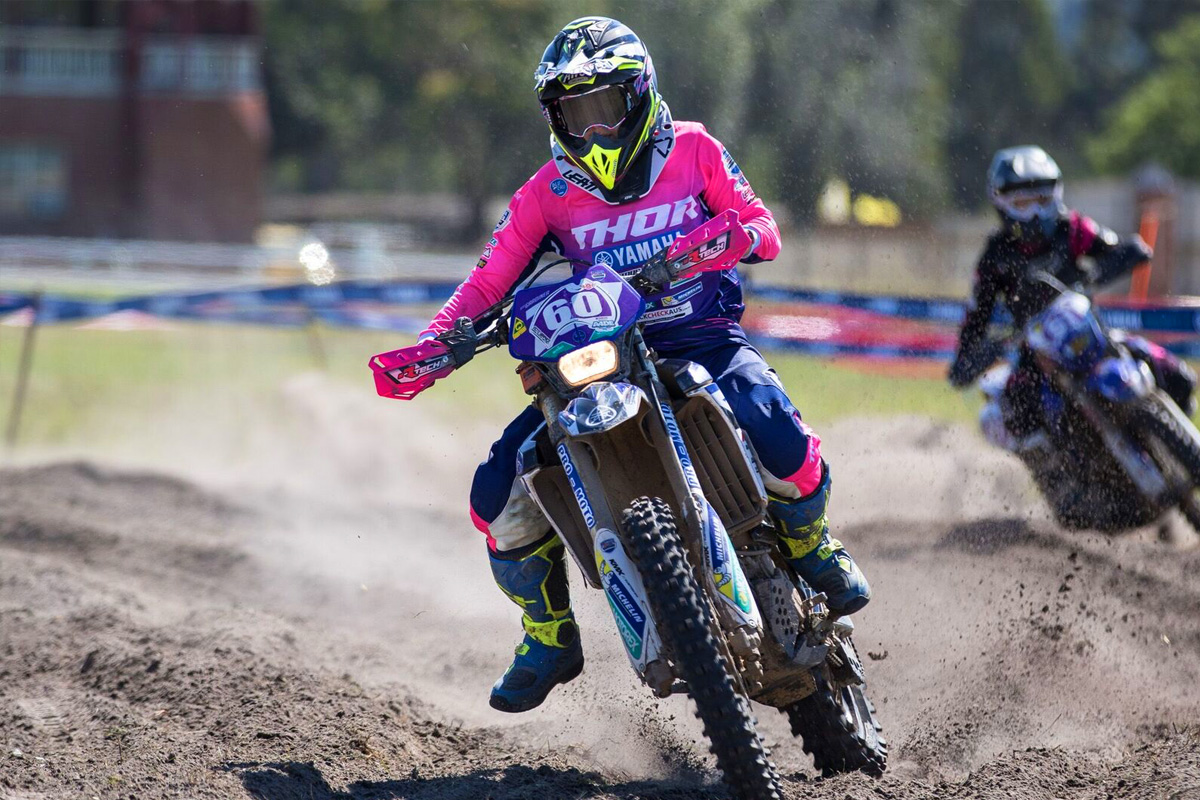 Jessica Gardiner took out her fifth A4DE Women's title after a close 4 day battle with Jemma Wilson. Photo: John Pearson Media
Womens
Jessica Gardiner got off to a great start claiming the holeshot and looking like she could make a break from the pack, but Jemma Wilson quickly caught Gardiner and the pair battled it out. The battle went back and fourth with Wilson making the move on Gardiner on lap three before the pair swapped position again on lap four and Gardiner rode her way to victory in 14:10.302. The win in the final moto gave Gardiner her fifth A4DE Womens title. Wilson in her 11th and last A4DE had to settle for second in the final moto with a time of 14:26.923, which also left her second overall and finishes what has been a stellar career at this level. Emelie Karlsson rounded out the podium, finishing in third position at the final moto and grabbing third overall in the process with a time of 14:48.776. 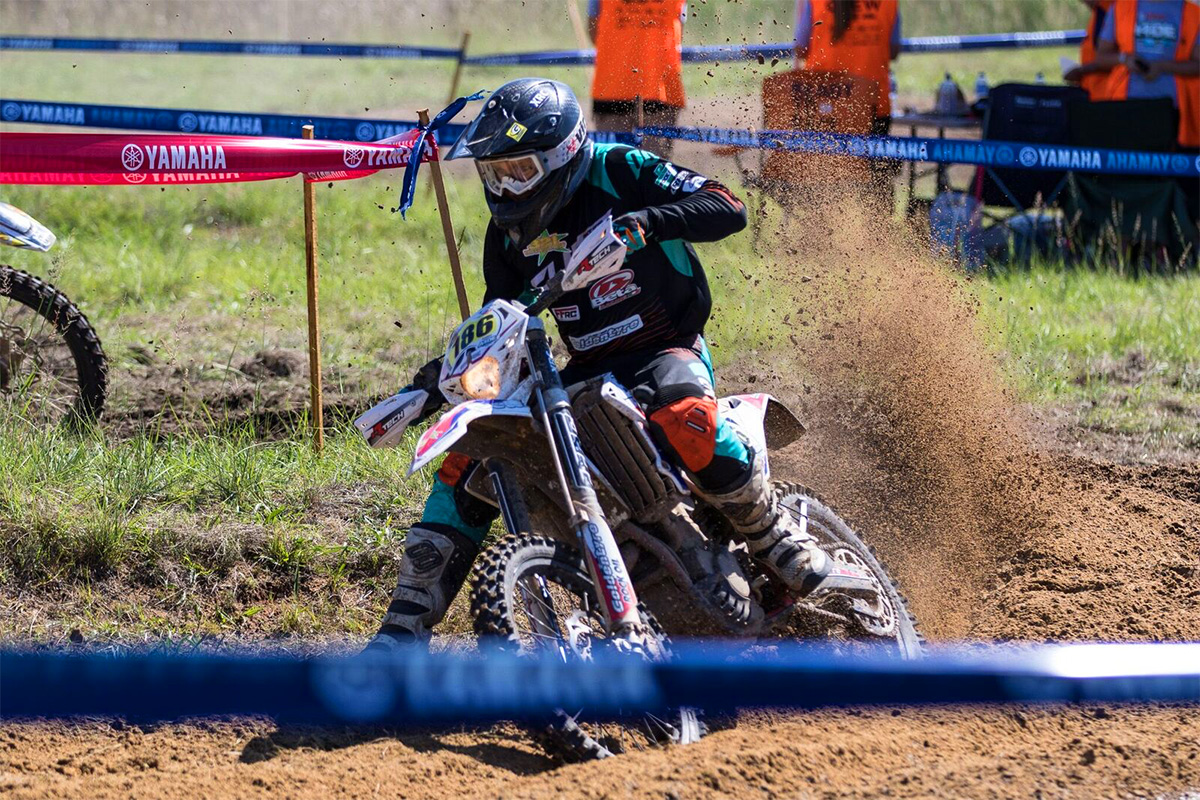 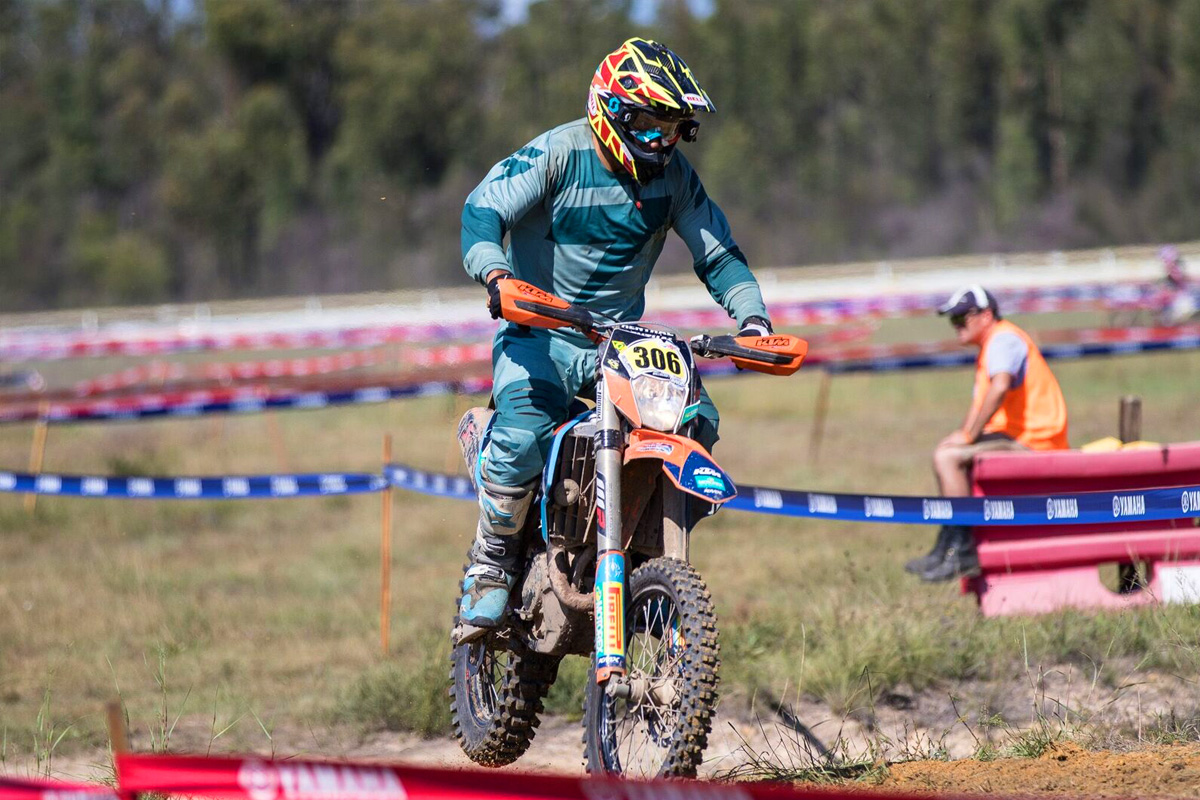 Challenge Trophy
New South Wales claimed the Challenge Trophy with the home state taking out three of the four days to walk away as the premier state in Enduro racing. Victoria took out the Junior Trophy after putting together a solid day four to back up their first three days results. NSW also swept the Ladies Trophy taking out all four days to walk away convincing winners.