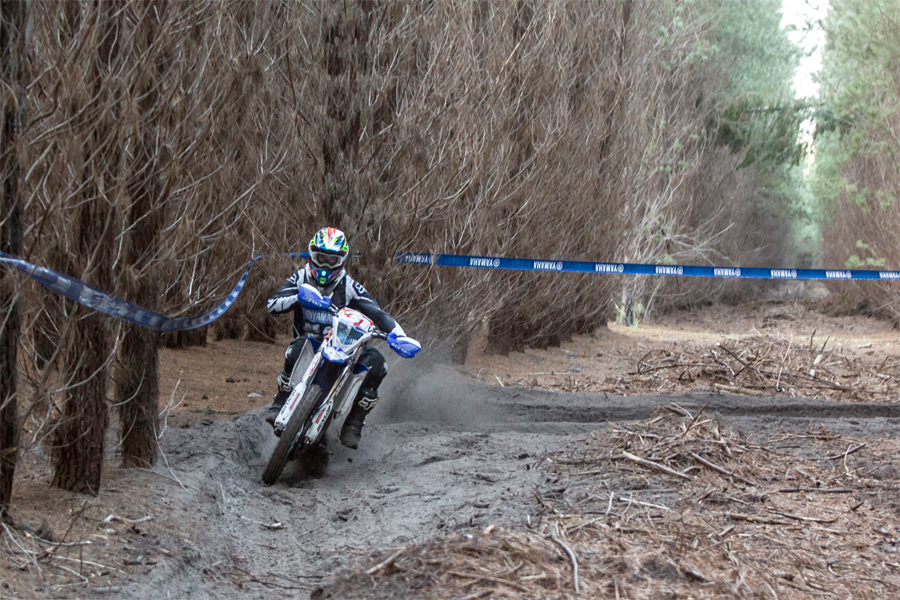 CDR Yamaha‰Ûªs Daniel Milner rode to his third Outright win in a row at round eight of the Yamaha Australian Off-Road Championship (AORC) held at Coonawarra, South Australia on Sunday the 30th of June.

The 22 year old from Lang Lang, Victoria beat the field for the second day staright in the unique two sprint format used by the Velocette club for rounds 7 and 8 of the 2013 championship.

Sunday saw the riders head straight out in to a 5Km test that started in a rock quarry before ducking in and out of a sandy pine Forrest before finishing back in the quarry.

At the end of the first test riders travelled along a tight trail which took them to the start of the second test for the day, where they were greeted by a whooped out sand test that was also used on day one.

After completing the second test, all 120+ competitors then had another trail section back to the pits where they could work on their machines and rest up, before heading back out to do it all over again.

Milner aboard his YZ250F had a clean day, completing all seven tests in a total time of just over 53 minutes, some 53 seconds ahead of the second placed rider and will now head in to the final four rounds of the season with a handy points lead in both the Outright and E1 class standings.

‰ÛÏIt‰Ûªs the first time I‰Ûªve won both rounds in a weekend, so I‰Ûªm really happy with that,‰Û
While the majority of Australia's top Off-Road racers head to Mildura in Victoria this coming weekend for the Hattah Desert race, Milner will skip the race to focus on getting ready to back up his 2012 Australian Four Day Enduro win, when Australia's biggest Enduro event of the year heads to Western Australia in a couple of weeks time.

‰ÛÏHopefully I can back up the win, I won the four day Outright for the first time last year." Milner explained. ‰ÛÏFrom what I‰Ûªve heard about Harvey, the tracks will be fast and sandy, so hopefully they will suit me well.

‰ÛÏI would love to bring home my second Australian Enduro Championship in the E1 Class and my second Outright win," he added.

Finishing second outright at round eight was Husqvarna racer Glenn Kearney who showed some great form on the technical tracks on offer on Sunday. Rounding out the outright podium and also leading the way in the E2 class on Sunday was veteran racer Stefan Merriman who put his world championship experience to good use on the tight Quarry test.

‰ÛÏThe conditions were very similar to what I ride at home,‰Û
Jarrod Bewley who stepped in to the E3 class for the weekend after riding the first half of the season in the E2 class, topped the E3 class in South Australia on Sunday on his Husaberg.

Jessica Gardiner returned home from the World Enduro Championship to win the Womens class aboard her Sherco, while Yamaha's Kirk Hutton took home the honours in the Vets class and Geoff Ballard aboard a Sherco was the man on the top step of the Masters class.

Top Image: Daniel Milner is the man to beat after winning the last three rounds of the 2013 AORC
Credit: FourohFour