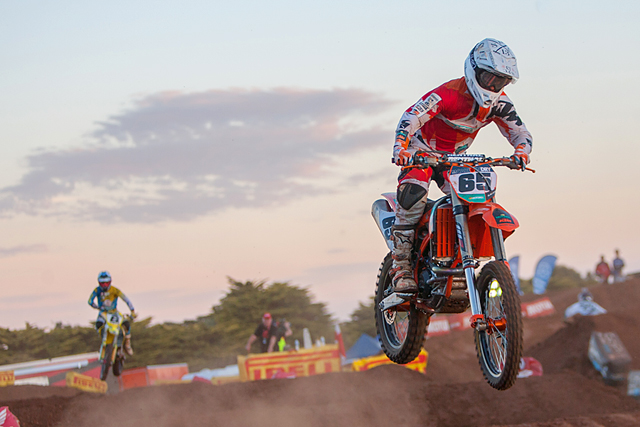 Motorex KTM rider Daniel McCoy showed plenty of grit to gather solid points despite his body copping a hammering at the Terex Australian Supercross Championship double header at Phillip Island, which was held in conjunction with the Australian Motorcycle Grand Prix.

McCoy was cleaned up in a dramatic first turn incident in Saturday evening‰Ûªs Round Four, but still managed to coax his bent KTM450SX-F home seventh in a race won by Weston Pieck from Josh Hill and Brett Metcalfe.

Juggling ice and strapping tape treatments on Sunday McCoy started poorly on the rock-hard surface for Round Five, but made his way forward to finish fourth behind race-winner Hill, Matt Moss and Sam Martin.

‰ÛÏSaturday there were plenty of crashes, off the start something happened with Matt who came over and hit me and I had a big cartwheel. The bike was all twisted up but I kicked the front wheel straight and rode the best I could to get back to seventh." McCoy explained.

"Sunday I had a swollen hand and a fat arm and the hardest part was hanging on in the whoops. Like everyone I had wheelspin and didn‰Ûªt get the start I wanted.

"I got back up to fourth and tried everything I could to move in on Martin but I couldn‰Ûªt get close enough. Fourth is good points but it‰Ûªs frustrating to be so close to the podium and not get there when you put so preparation in, and these tracks are not allowing for good racing and just limiting what we can do.

"With one round left I‰Ûªm going for it, there‰Ûªs nothing else I can do, I want to finish off strong. I‰Ûªm disappointed with how things have gone for me but I feel like I‰Ûªm riding okay, I just need to put myself in a better position.‰Û