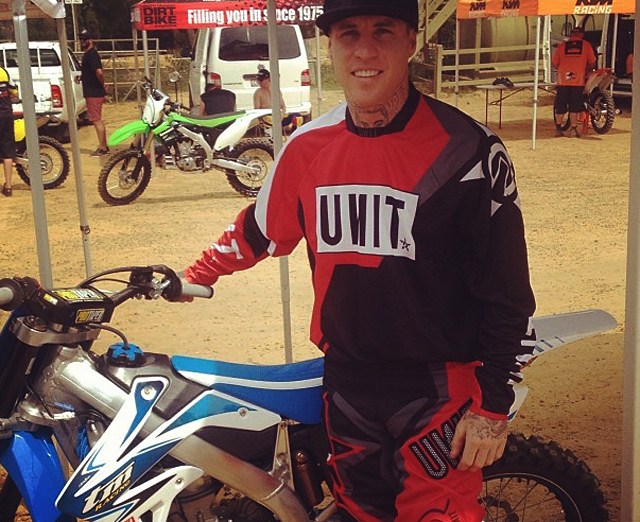 Daniel McCoy and TM Racing Australia have announced that they have reached an agreement that will see them join forces to create a new look privateer effort for the 2014 season.

McCoy who resides in Orangeville, NSW has been a national motocross and Supercross championship front runner for the past decade and will head up the new privateer effort heading into next year and will essentially run the team with some assistance and technical support from TM Racing Australia.

"With the limited number of rides available in the sport at the moment and after spending some time testing and even racing a TM earlier this year, it made sense to head down this path alongside TM Racing," McCoy explained. "While I feel that I still have a few good years left racing myself, I also have to look towards the future and this opportunity to partner with TM Racing Australia is the start of something that I am confident will turn into a long term venture.

"I will be working with Andrew Franklin from TM Australia who is helping me put together what is essentially my team for 2014. While my focus will be mainly on racing and developing the bikes next year, there is a long term plan in place that will see the team grow over the coming years and hopefully secure myself a future within the industry after my racing career.

While only early into planning the 2014 season which does not kick off until the 30th of March at the opening round of the Monster Energy MX Nationals being held at Broadford in Victoria, McCoy has already committed to racing the MX2 class next season, and will then weigh up his options as to which class he will race when the Supercross nears.

"I have spent some more time aboard a few of the TM bikes since the end of the Supercross season and I have no doubt that they are more than capable of running up front in Australia as we have seen with Nick Sutherland this year." McCoy stated.

"I have chosen to race the TM MX250 Two Stroke for the MX Nationals in the MX2 class for next year. There is no doubt that the TM 250 two stroke is a great bike and combined with the fact that I have always felt at home on a two stroke I think it will be a perfect fit for 2014. It will also be great to go out an mix it up with the younger guys now that I am considered one of the older guys in the sport," the 29 year old added.

"As for Supercross we will make a decision regarding the bike and class as we get closer to the SX season".

Though only a team in it's formative stages, McCoy along with TM Racing Australia have been able to land two big sponsors early in the piece with both UNIT and Belray coming on board for the 2014 season.

"We have also been lucky enough to have UNIT come onboard as one of our first sponsors and I will be running the new Unit MX apparel that will be available from January next year.," McCoy explained. BelRay have also put their support behind us for 2014, it really is great to have two big companies join us already.

"We are in discussions with a few other potential sponsors at the moment, but there is no doubt that we are seeking to partner with some more top line companies with a view on building the team over many years.

TM Australia‰Ûªs Managing Director Andrew Franklin introduced TM back to national level racing in 2013 with some great success putting the Italian manufacturer back on the map in Australia and is more than confident that McCoy is the right rider not only to help get the on track results TM are looking for, but also the right Man to look after TM Australia's Racing efforts into the future.

‰ÛÏ2013 proved to be a successful year as we introduced TM Motorcycles back into national motocross and supercross competition,‰Û