Daniel Chucky Sanders On Top Of The World After ISDE Success 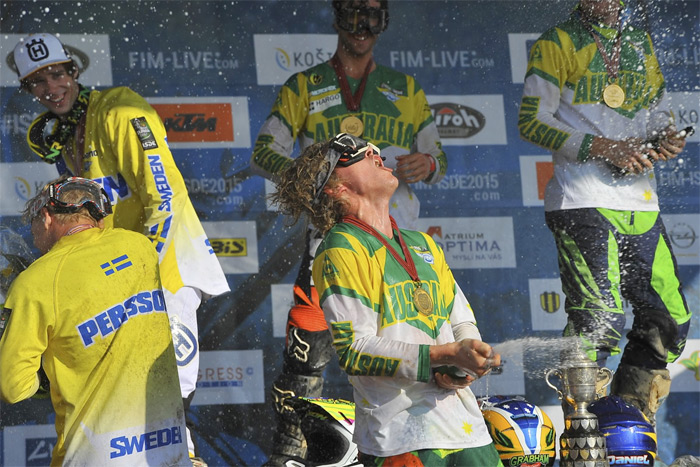 The charismatic young Victorian known as ‰Û÷Chucky‰Ûª left Australia as the fourth fastest rider in the Australian Off-Road Championships, and returned from Kosice in Slovakia as the top E3 rider and fourth-fastest enduro rider in the world.

Sanders was one of Australia‰Ûªs big winners when he completed this year‰Ûªs International Six Days Enduro, considered the ‰Û÷Olympics of enduro‰Ûª, powering his two-stroke KTM 300 EXC to fourth in overall classification.

‰ÛÏIt's just a crazy feeling." Sanders admitted. "I‰Ûªm rapt with how things turned out, I couldn't really ask for anything better.

"I had no idea I could do that, not this year, maybe in a couple of years time. Fourth overall, first in E3 class and winning the juniors, and with the senior team winning and the girls winning, it‰Ûªs pretty much the perfect week for us. We partied hard just to show we deserve it, and had a good time.

"Myself, Tye, Mick, his helper and Kearney were still going strong at 7.30 the next morning!

"We realised on day one in the juniors after we got a gap on all the other riders, that we had the fastest team and that we could do it if we all stayed on two wheels and finished every day. In my class I got into the lead on day two and kept pulling a bigger and bigger gap so I came into the final Moto with a two-minute lead and I had about 40 seconds on fifth outright so I knew all I had to do was hold it together and not get lapped.

"I got a good start in the final Moto and tried to just stay consistent and I was really happy with it. After I rode around the last corner my old man jumped over the fence and celebrated with me a bit and that felt good to have my family there, they‰Ûªve put a lot of effort into my racing career so far, so to achieve those things early in my career is a very memorable thing and really puts a big smile on my face.‰Û