Daneil Milner Back with a Vengeance at Dungog Yamaha AORC 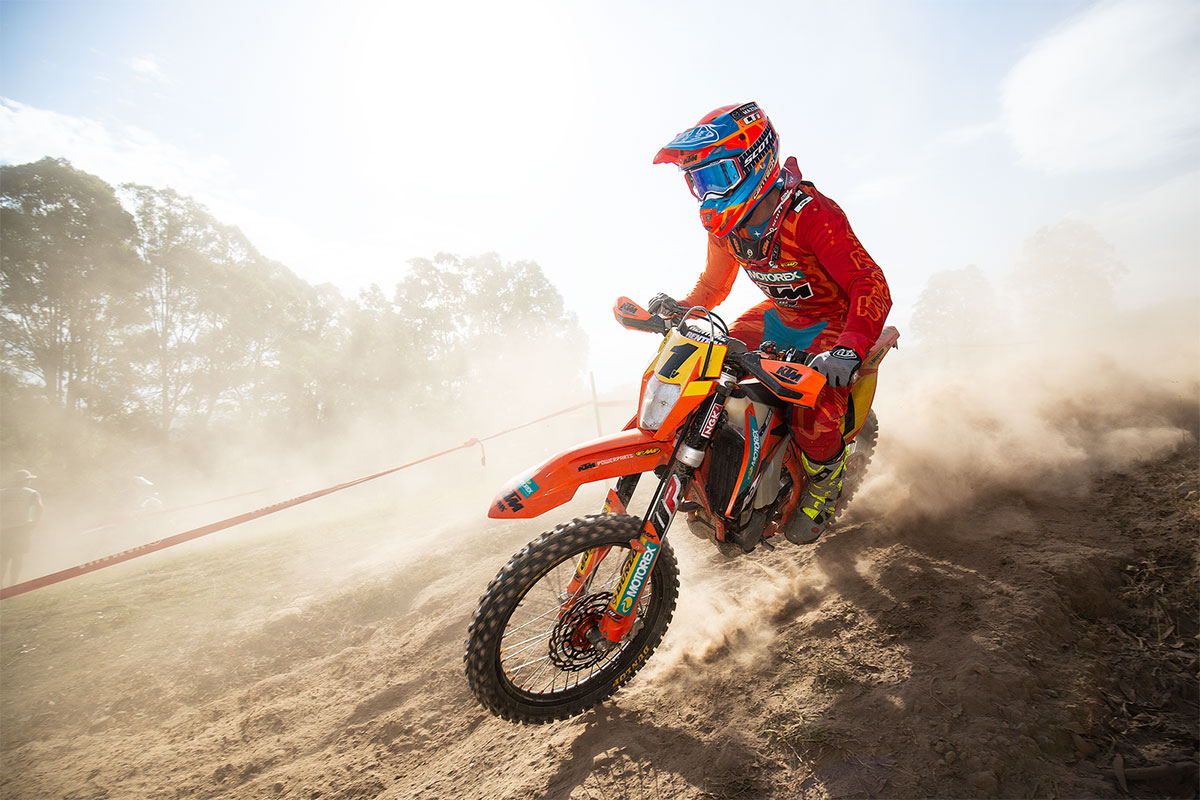 Daniel Milner took another win in a perfect season so far. Photo: John Pearson Media
After almost two months off the Yamaha Australian Off-Road Championship (AORC) was back with a bang at Dungog, New South Wales, in the form of a time carded enduro.

Daniel Milner didn‰Ûªt miss a beat taking the class win in E3 along with the fastest time of the day. Daniel Sanders continued his great season taking out the E2 class, making it five wins in a row this season.

In E1 it was a breakout victory for Fraser Higlett who pushed through the tricky Dungog conditions to claim his first win of 2018.

It was business as usual for Michael Driscoll in the EJ class, taking the win aboard his Yamaha. In the J4 class it was Kyron Bacon taking the win on his Honda, whilst in J3 Will Riordan showed his class taking the win and in J2 it was Kobe Conley using the Dungog conditions to his advantage.

E3
Milner was a man possessed today, putting the field to the sword with serious speed from the first test and showing his class. Milner made the tight technical cross test look a breeze on the grass based enduro test, stopping the clock at 45:44.564. Lachlan Stanford continued his consistent season, finishing with a time of 47:25.407. Rounding out the podium on his new ride, Scott Keegan, clocking a time of 47:50.130.

Milner was happy to be back on the bike at AORC and put a tough month behind him, ‰ÛÏThe time off definitely helped me and after a rough last month I came here extremely determine to get out here and get a good result. The trail here was unbelievable a lot of time must have gone into putting that together, then the tests just had awesome lay outs on both the cross and enduro tests. It was just an awesome day and the tracks were good fun,‰Û 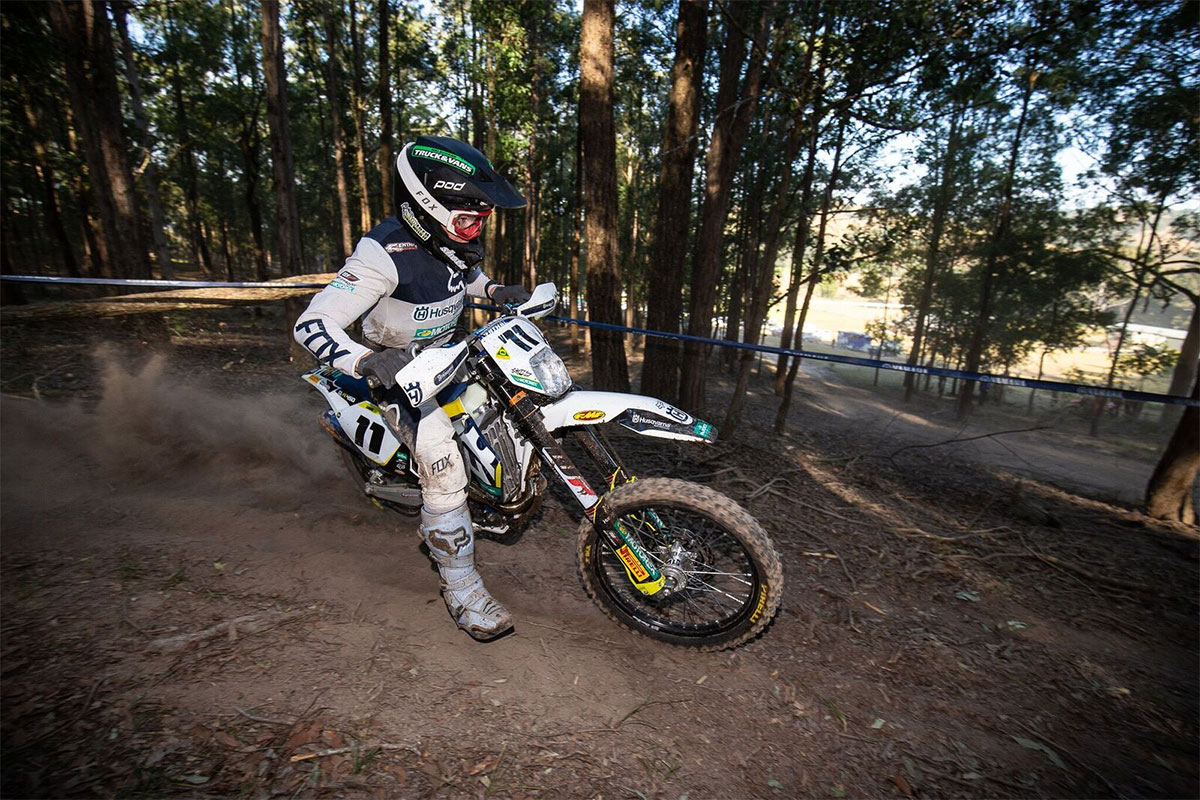 Victorian Daniel Sanders lead the way in E2. Photo: John Pearson Media
E2
Daniel Sanders continued his rich vein of form in AORC after returning from overseas racing this year, claiming his fifth win in a row. It wasn‰Ûªt all smooth sailing for Sanders who took a hard fall during his sight lap, but he regained his composure to once again take the class victory with a 46:19.584.

Josh Green backed up his efforts at Hattah during the break putting his Yamaha into second position, stopping the clock at 47:02.420. In third it was the man in orange, Lyndon Snodgrass finishing the day with a time of 47:11.989, look for Snodgrass to push Sanders and Green for a top two finish tomorrow. 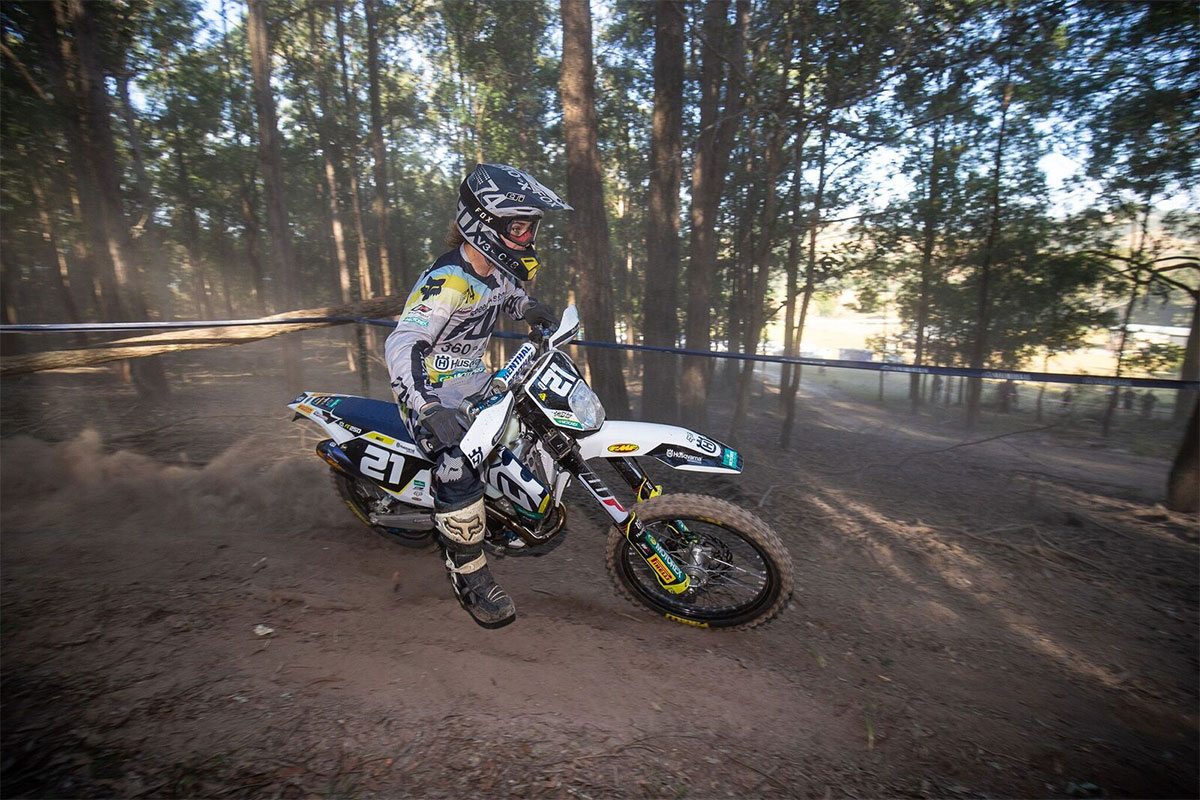 Fraser Higlett took his first win in the E1 class. Photo: John Pearson Media
E1
The improvement of Fraser Higlett has been noticeable this year with impressive results earlier in the season and a strong Yamaha Australian Four-Day Enduro performance, but today he took another step forward collecting his first E1 victory of the season.

Higlett finished with a time of 47:03.373 to put an end to the Luke Styke‰Ûªs winning streak. Styke wasn‰Ûªt far off the pace, finishing with a time 47:08.606 to put his Yamaha in second position. Taking the final step on the podium was Jack Simpson who showed great skills throughout the day, pushing hard all day and stopping the clock at 48:26.559.

125cc Amateur Cup
A first for both AORC and Dungog Motorcycle Club saw the Amateur 125cc Cup join the proceedings, and it would be Geoff Braico who took out the class win. Ben Grabham did his best to keep Braico honest, but had to settle for second place. The last step of the podium went to Stuart McWilliam who fought all the way to the finish. 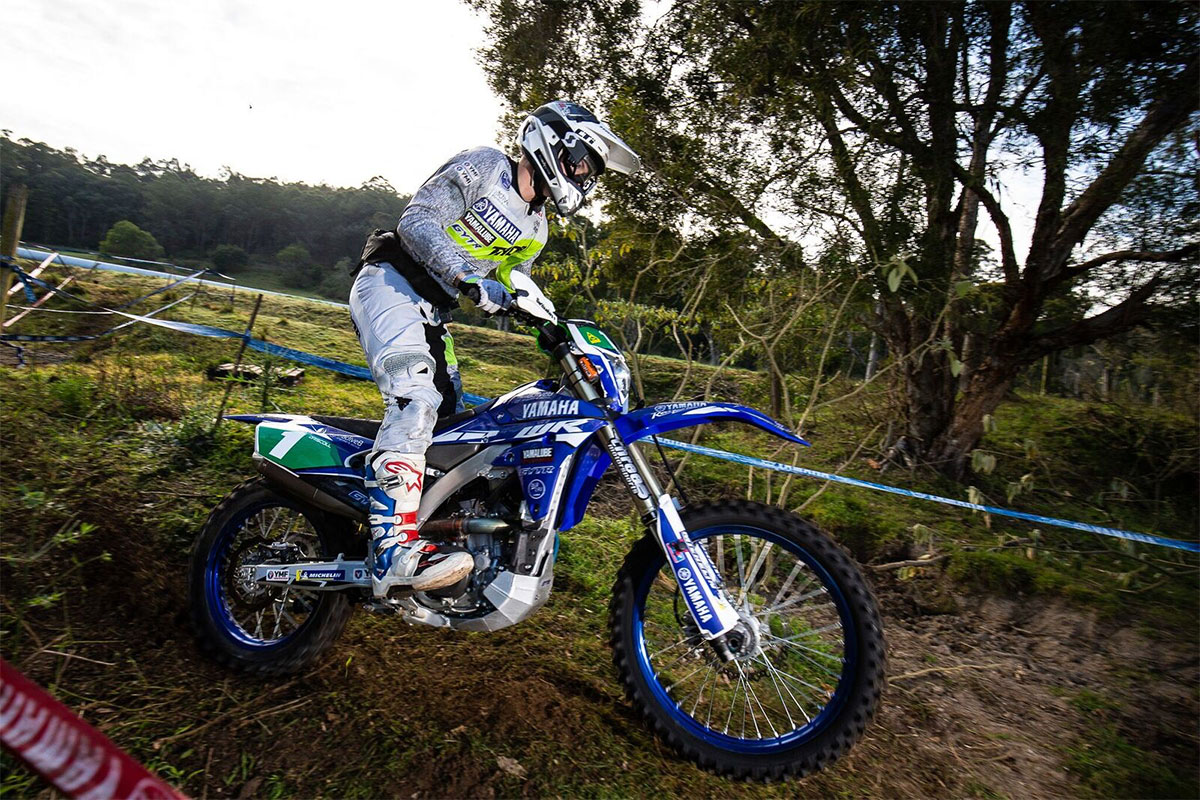 Yamaha's Michael Driscoll took a strong win in the EJ class. Photo: John Pearson Media
EJ
Michael Driscoll has been in a class of his own in season 2018 and today was no different for the Yamaha rider, putting time on his competition right from the word go. Driscoll completed his day with a time of 1:16:42.848. In second place and showing great improvement since moving into the EJ class, Joshua Brierley put in a great ride on his Husqvarna stopping the clock at 1:19:05.269. Harrison Teed found his way onto the last step of the podium with a solid ride in the Dungog conditions, finishing Round Five with a time of 1:20:11.094.

Driscoll enjoyed the Dungog conditions, ‰ÛÏThe tracks were really good out there and for me I enjoyed that they were short, and the trail was a bit dusty that did make it hard for us but all in all it was a good day for us. I felt fresh all day and I‰Ûªm looking forward to getting back out there tomorrow,‰Û 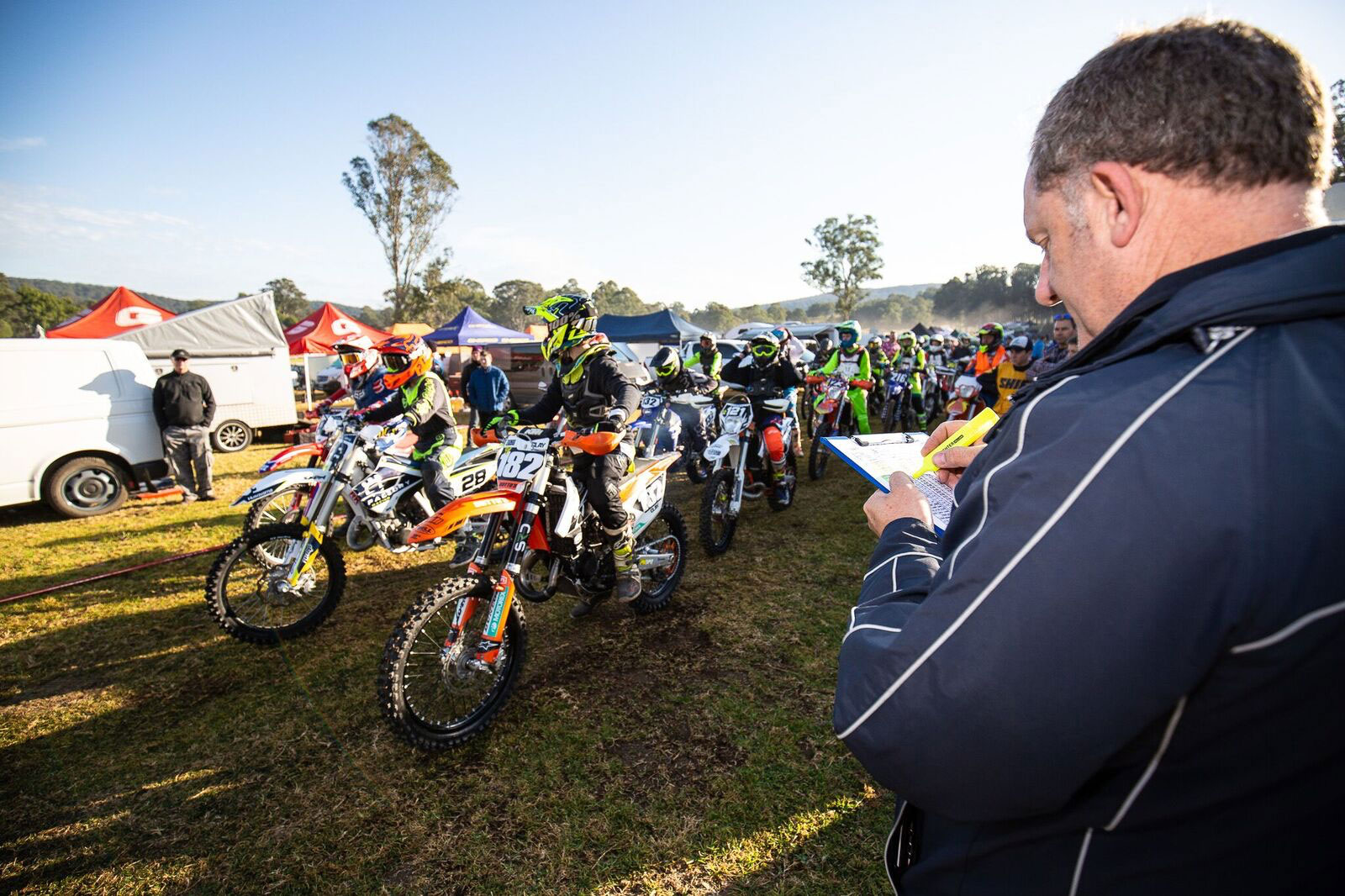 The juniors get ready to do battle. Photo: John Pearson Media
J3
Will Riordan continues his stellar 2018 season grabbing his fifth win in as many starts, once again leading the field, finishing the day with a time 32:18.971. In second place was Angus Riordan who has moved into the J3 class after jumping up from J2 and did he make it look like a good fit. Angus pushed the whole day but couldn‰Ûªt quite reel his brother in, settling for second with a 32:20.634. Rounding out the podium behind the Riordan brothers was the Yamaha rider in Blake Hollis, who continued his solid season with another podium.

The podium was rounded out by Zac Perry who had a consistent day but just couldn‰Ûªt find the same speed as both Conley and Johnson, ending the day with a time of 35:57.057.