Stage 8 of the 2017 Dakar was a second stage triumph for Joan Barreda who lead from start to finish in both specials.

Stage eight of the Rally Dakar 2017, the second leg of the two-day marathon stage which set off yesterday from La Paz bound for Uyuni, was shortened by 72 kilometres due to a flooded river crossing in Bolivia. The day was split into two timed-sections, one covering 174 km on Bolivian soil, before crossing the border into Argentina for another, 246 km long.

Joan Barreda went full-throttle right off the bat, determined to take the stage victory. The Spaniard clocked the fastest time of the 110 bike category entrees who left the bivouac from Uyuni this morning.

The riders were faced with innumerable hazards in the Bolivian mud. Once onto Argentine terrain the Monster Energy Honda Team rider really let loose, not letting up until the final flag where he sealed victory. The win marks the second triumph for Barreda and the third for the team after the Ricky Brabec‰Ûªs win yesterday. 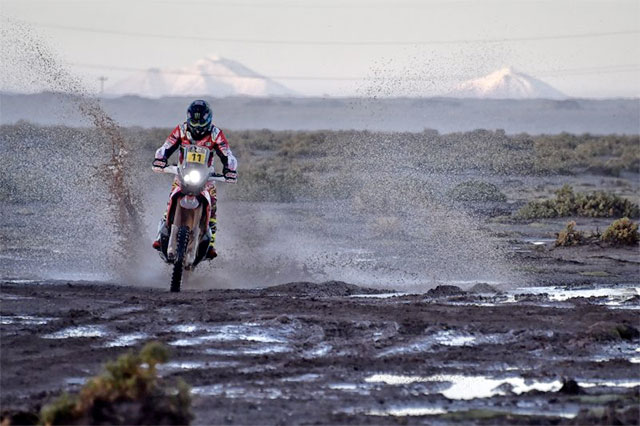 Joan Barreda on the way to his second stage win.
"There were a lot dangers out there at the start of the special," Barreda said. "A lot of water, a lot of mud and mist to make the visibility more complicated. But I got to enjoy the final 300 kilometres and I was able to open the throttle a bit more. By the end, the tyres had taken a fair beating from the marathon stage and were skidding a lot. But it was great fun to finish at the front and with the best time too."