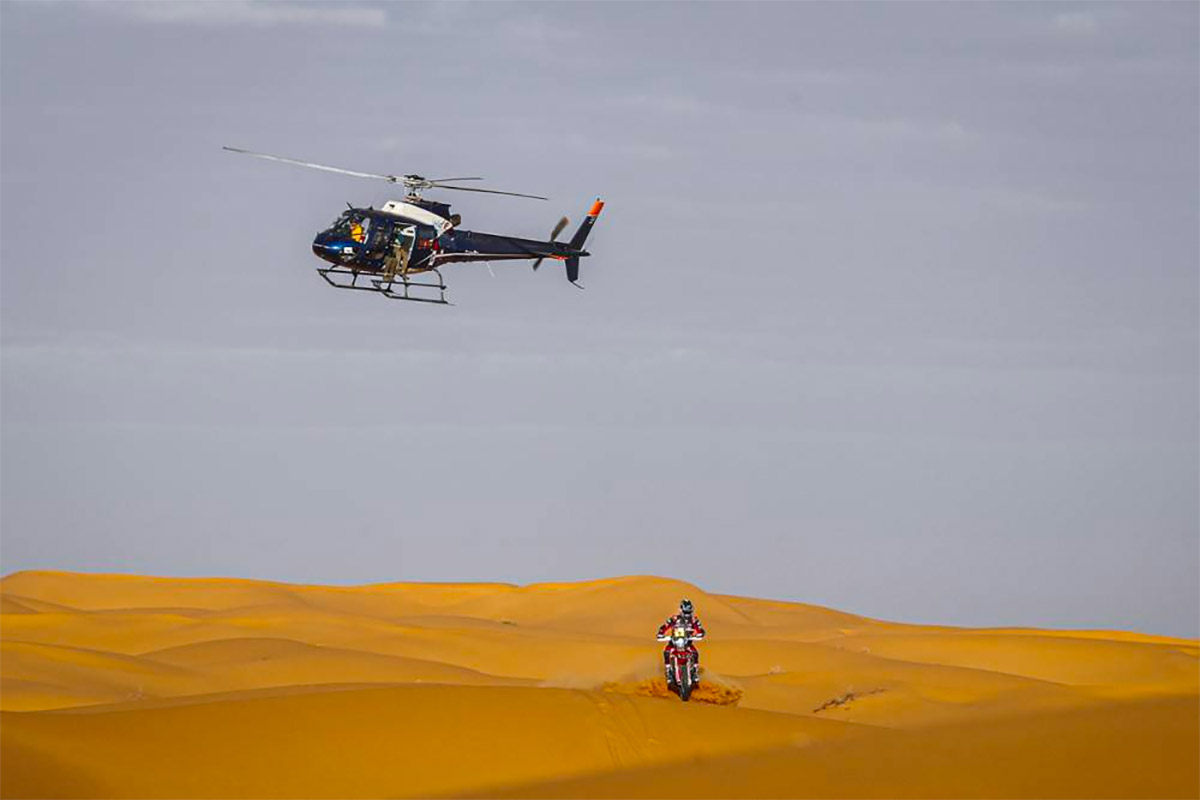 With the stage win It was all smiles for Ricky Brabec as he rode into Riyadh after the longest pre-rest day special of the 2020 Dakar Rally. Photo: DPPI Media
Ricky Brabec continues his Dakar 2020 crusade with another stage triumph, the second of this edition, consolidating his leadership as the new Dakar arrives at it's rest day in the capital Riyadh.

While Brabec took the stage victory ahead of team-mate Joan Barreda and Matthias Walkner, it was a tough day for Australian Toby Price who had mechanical problems with a blown tyre and lost 16 minutes which saw him drop from second to third in the overall rankings. Price got going again after Andrew Short gave him his rear tyre. Short finishing the stage on his rim! The biggest loser for the stage was Honda's Kevin Benavides who had an engine drama and lost three hours.

The sixth stage started from Ha‰Ûªil bound for Riyadh, with 478 kilometres of special stage against the clock out of a total distance of 830 kilometres, which gave competitors the ideal opportunity to unleash their machines on the open Saudi desert. The final day of the first week of racing saw riders face arduous navigation, off-piste and copious amounts of sand and dunes.


It was all smiles from for Brabec as the Monster Energy Honda Team rider rode into Riyadh after the longest pre-rest day special of the 2020 Dakar Rally. The American will be able to rest and recuperate before heading back out aboard the Honda CRF450 RALLY to defend his overall leadership in the second and final week of the competition.

"The day was good. I didn‰Ûªt really have a strategy," Brabec explained. "I wanted to catch Andrew Short who started in front of me and I did just that. I rode with him all day. It was very unfortunate for Toby because he had a wheel mishap at maybe kilometre 330. I rode to the end and now we have a rest day and I have a 20-minute lead in the general and that‰Ûªs really awesome. It‰Ûªs really nice knowing that. I can‰Ûªt really believe it. It‰Ûªs incredible.

"So now we are going to get some rest and recoup and refresh and get ourselves together ready for the next six days in Saudi Arabia. I‰Ûªm more excited that we are here in warm weather than I am at being here for the rest day. I hate being cold. I have three layers on right now but it‰Ûªs warmer and I‰Ûªm liking it. Nacho‰Ûªs riding really well. He‰Ûªs a great team-mate and a great-camper mate. The problem with Toby is going to set him on fire next week, so we have to be careful next week. Hopefully we can stay ahead of him. I won the stage today so I have to lead out. Hopefully I can lead out well. So we will rest and put our things together and hope for a good day." 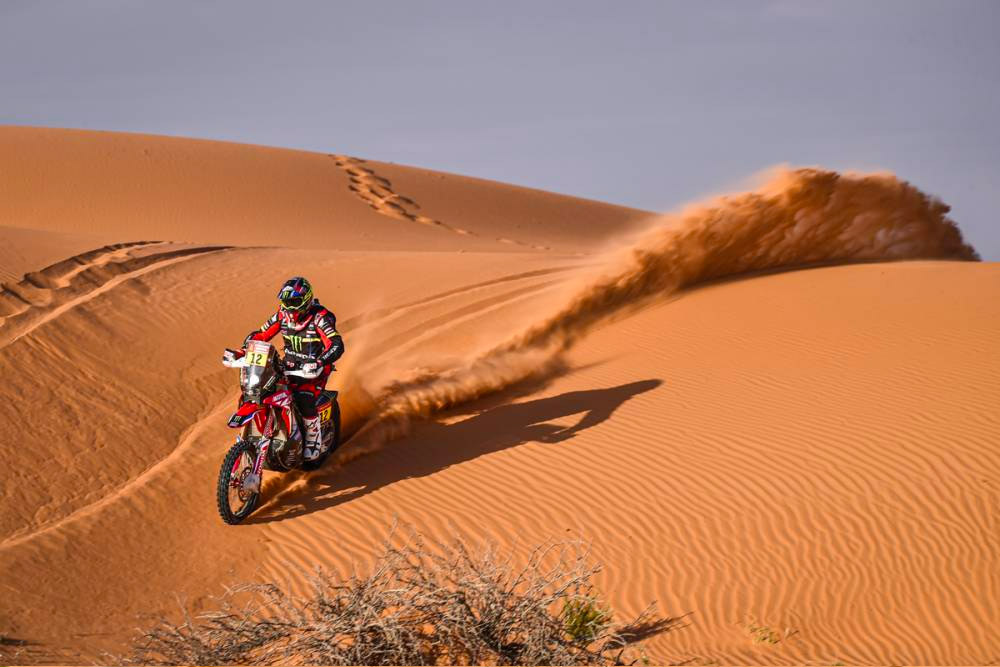 Joan Barreda made it a Monster Energy Honda Team 1-2 coming home second on stage. Photo: DPPI Media.
Joan Barreda, likewise, turned out a fine showing in the special, looking more at ease on the bike, on terrain which is increasing to the Spaniard‰Ûªs liking. Today‰Ûªs second position on the day reaffirms Barreda‰Ûªs place among the contenders for a finish among the prize-winners and now occupies fifth place in the overall standings.

"Today I am very happy after the problems I have had recently which I‰Ûªve been trying to save something from the stages and have been trying to get the good sensations back," Barreda said. "The truth is that I felt much better today and I kept a good pace but I also tried to focus on not making any navigational errors. I tried to regulate the pace as it was very fast throughout the day. I much prefer the dunes, which is what I'm most used to. I don't remember a race with so many days running over rocky terrain. But well we are making positive progress which is the important thing." 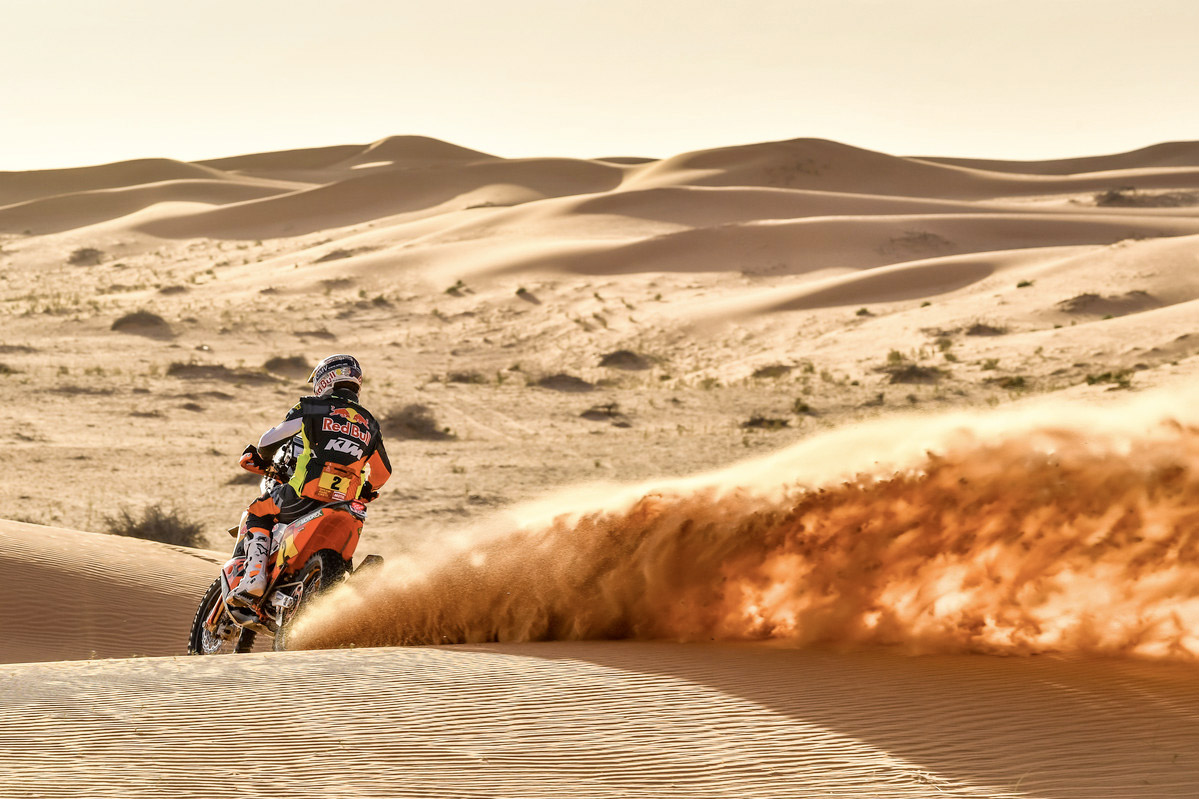 ‰ÛÏIt was a very intense stage today ‰ÛÒ very long and maybe 80 percent full gas the whole way," Walkner reflected. "It was tough both physically and mentally and I‰Ûªm glad of the rest day tomorrow. My pace was good today, I felt comfortable and didn‰Ûªt make any mistakes. With the first half of the rally done I think we are in good shape ‰ÛÒ everyone is really fast this year and it‰Ûªs going to be close. The goal, as always, is to make it safely to the end, so hopefully I‰Ûªll have a good second half to the rally.‰Û 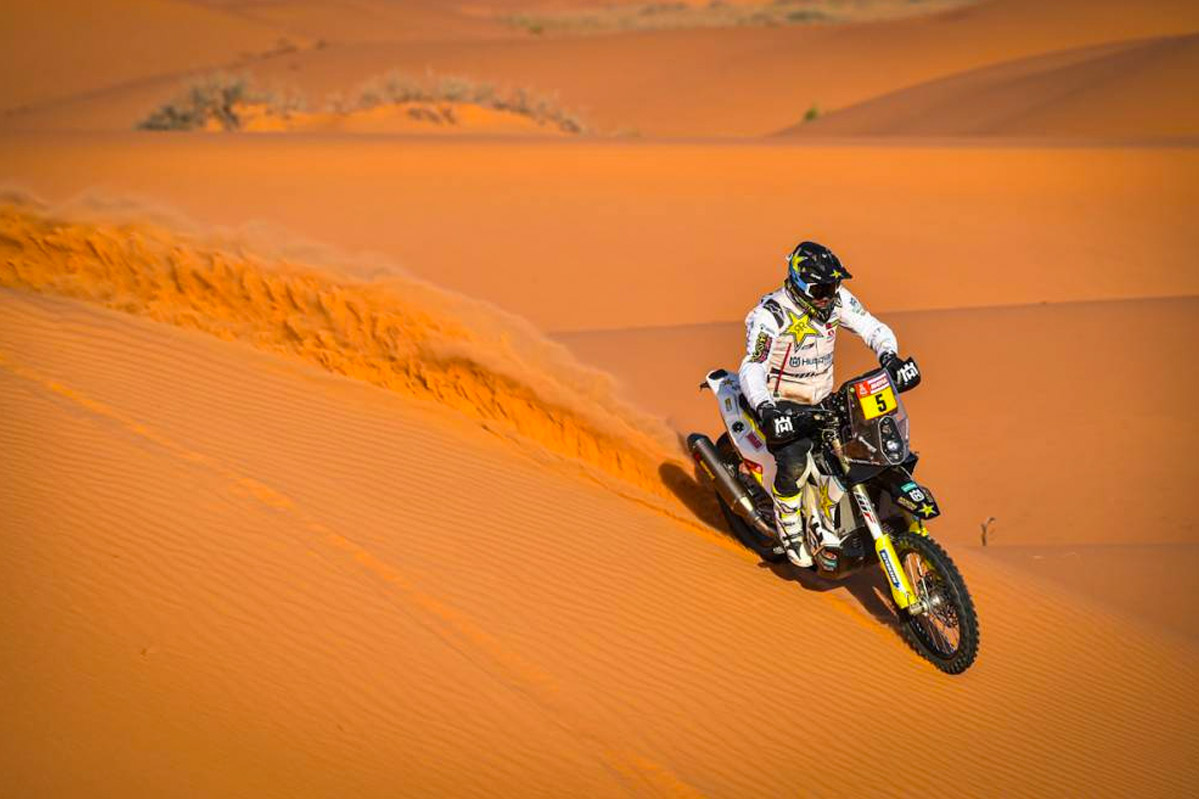 ‰ÛÏWe were able to set a solid pace and I didn‰Ûªt lose so much time, which was good," Quintanilla said. "The stage was really fast with long caps between camel grass and dunes. Towards the final 50 kilometres my body was really starting to feel tired. I‰Ûªm looking forward to the rest day now and then hopefully I can have a good second half to the rally.‰Û ‰ÛÏThe first part of the stage today was really nice ‰ÛÒ I enjoyed it a lot. My brother caught me and we were riding together for a good while," Benavides explained. "It was a tough stage, like every stage so far. It‰Ûªs really good to finish fifth, which sets me up well for the next half of the rally. I‰Ûªm pleased with my riding and the bike feels great ‰ÛÒ I‰Ûªve really found a good rhythm this year.‰Û 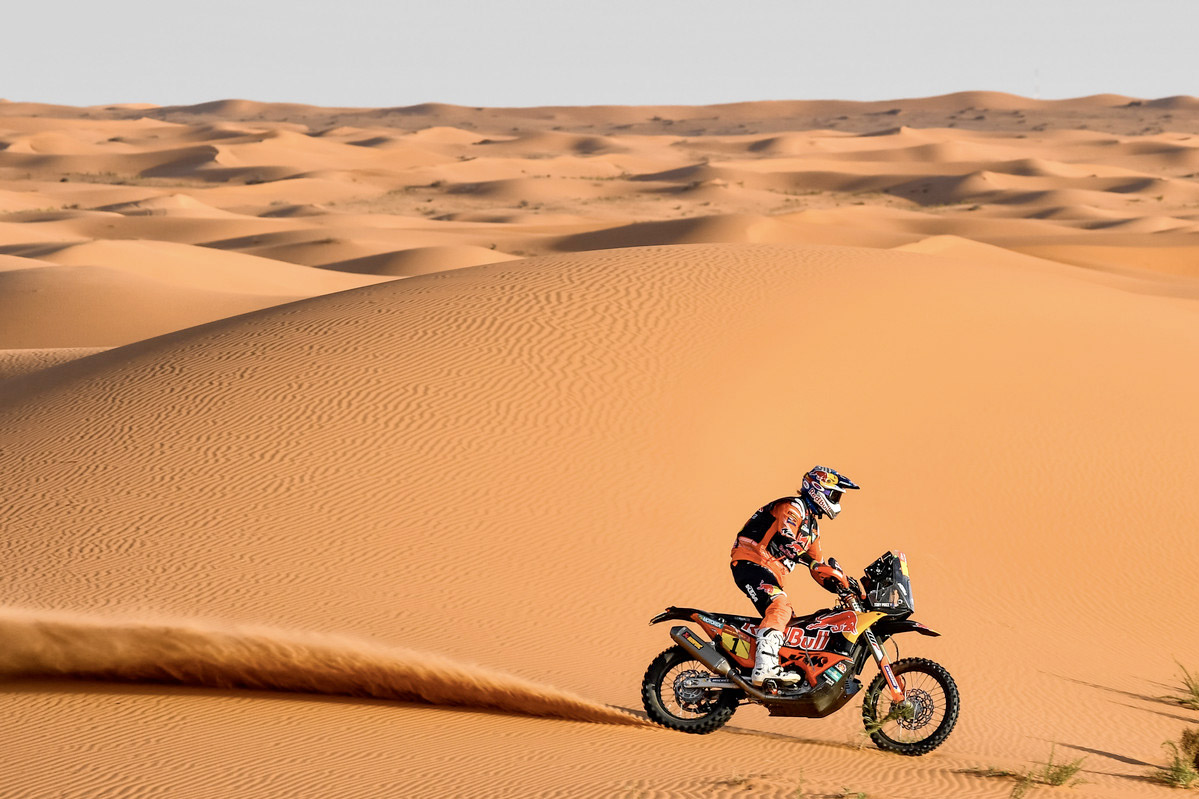 Australian Toby Price who had mechanical problems with a blown tyre and lost 16 minutes which saw him drop from second to third in the overall rankings. Photo: Rally Zone.
Day five winner Toby Price had the unenviable task of leading the motorcycle class out into the longest timed special of the rally so far. Despite the disadvantage, Price rode impeccably, carrying good speed over the Saudi sand and navigating well at the front. With the best part of the stage complete, a technical issue forced the Australian to stop. Price lost around 10 minutes and finished 11th fastest on the stage. However, with six days of racing remaining, Price still lies in a provisional third overall and is fully focused on regaining the lead of the rally.

‰ÛÏIt‰Ûªs been a long stage today with long liaisons, definitely one of the toughest so far," Price said. "Leading out was going really well for most of the day ‰ÛÒ I was navigating good, my pace was good, but then at about 390 kilometres I had an issue and had no choice but to stop. Luckily another rider was able to help me out and I got going again. I lost some time, which is frustrating but we‰Ûªre only at the halfway point now and there‰Ûªs a long way to go.‰Û