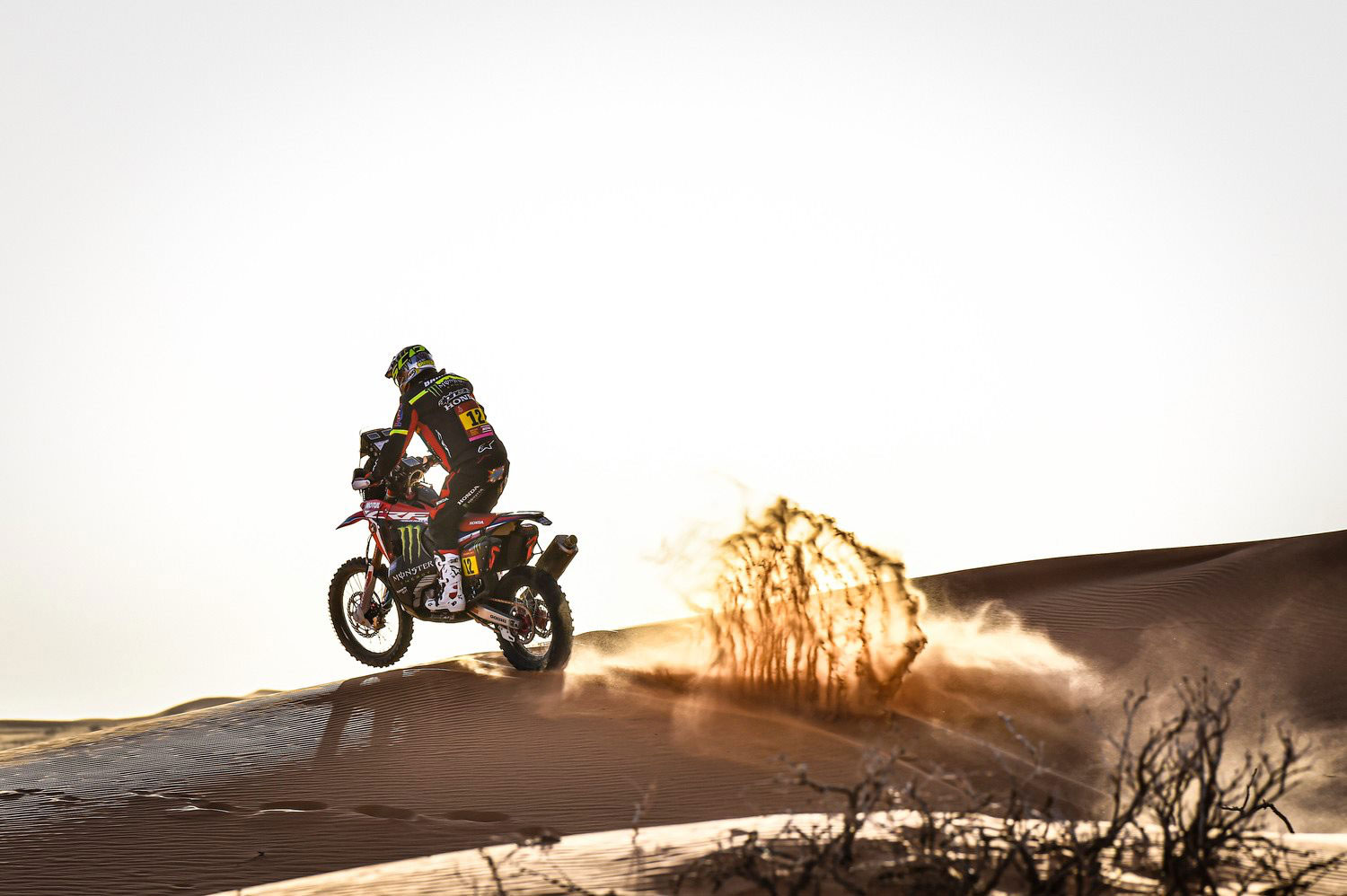 Joan Barreda led hom a trio of Monster Energy Honda's in a perfect finish for the Japanese brand. Photo: DPPI
Monster Energy Honda Team riders Joan Barreda, Ricky Brabec and Kevin Benavides all made it onto the podium at the end of stage 10 of the 2020 Dakar Rally which was cut short due to inclement weather.

While it was a Red letter day for Honda after occupying the top three positions it was also a memorable day for Australia with Toby Price and Rod Faggotter finishing fourth and fifth respectively.

The tenth stage of the Dakar Rally ‰ÛÒ initially scheduled to cover 534 kilometres over two timed sectors ‰ÛÒ was shortened to just a single special when strong winds were forecast in the second stretch. Riders were directly diverted to the bivouac at Shubaytah to avoid the winds which could potentially have put the participants‰Ûª safety into jeopardy.

Barreda, Brabec and Benavides finished the short 222-kilometre special stage after imposing a white-knuckle pace. In spite of the speed, the squad riders were careful to keep their Honda CRF450 RALLY machinery in optimum conditions, given that today is the first part of the marathon stage which will see the riders accommodated in a separate camp.


Today ‰ÛÒ as will be the case tomorrow ‰ÛÒ riders received the roadbook 25 minutes ahead of the start of the special. Once back at the Shubaytah bivouac, with no external mechanical assistance permitted, it was left to the riders themselves to attend to any servicing that might be necessary, as rally rules stipulate that no tyres can be exchanged with other riders, but only mechanical elements, if need be.

"I think I rode a very good stage, although tomorrow I will have to start from the front and open the track in the dunes," Barreda said. "Anyway, I‰Ûªm satisfied with the pace that I‰Ûªve kept. I pushed hard to reach the frontrunners Price, Quintanilla which I managed to do at kilometre 130. Then we rode together as far as the refuelling where the organization then cancelled the rest of the special. The important thing now is that Ricky has the race under control and that Nacho, me and Kevin are fine. This is great for Honda!" 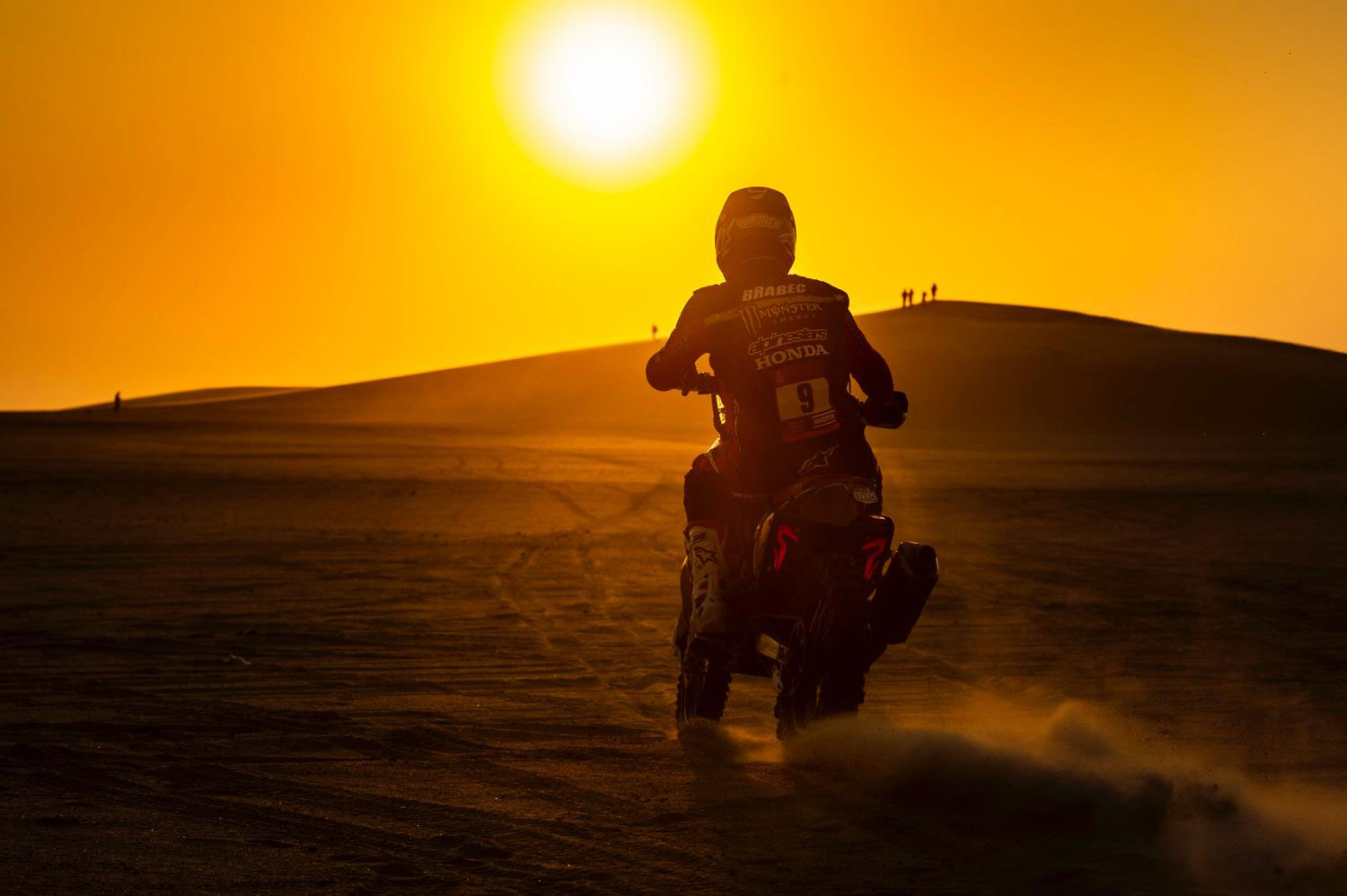 "We are in the bivouac of the marathon stage and we have only two stages left. Today it was very windy, and with the sand that was rising it was hard to see well, so they decided to cancel the last part. Well, we have to go every day, there is no other plan or strategy to complete. The goal is to get to the finish line every day with the motorcycle," Brabec said. 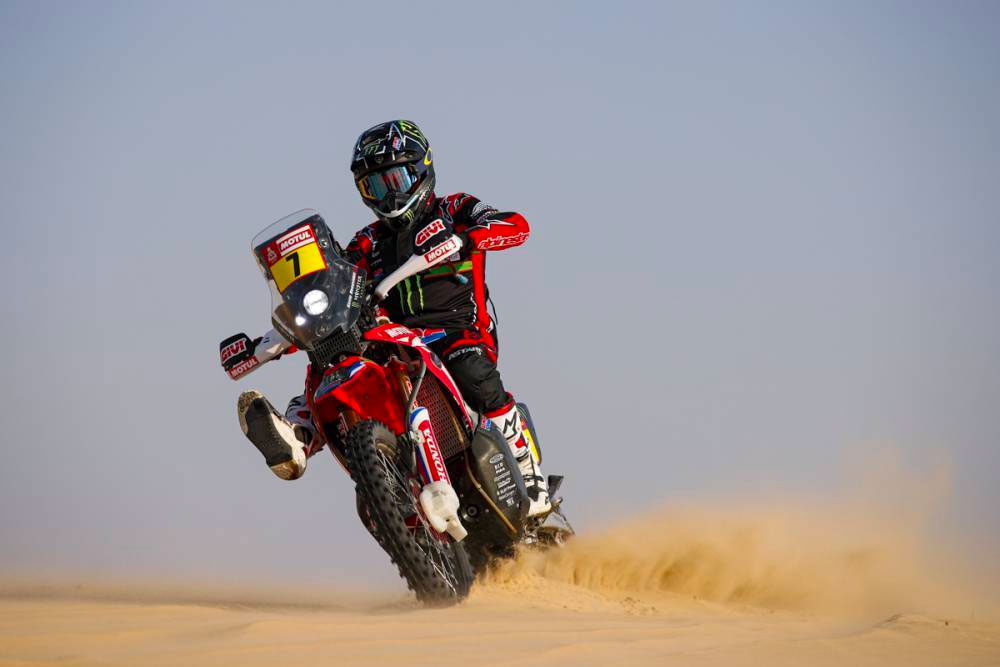 "Today was a short stage, very fast at the beginning, with very dangerous cut dunes," Benavides reflected. "I took it easy at first, as a precaution, and then I began to push a bit harder. In the end, at the refuelling we were told that the second part had been cancelled for security reasons, which seems right to me. I'm happy for us, it's been a good day for the Honda guys, with a full podium. The bikes have done few kilometres, so they are fine and do not need much attention!" 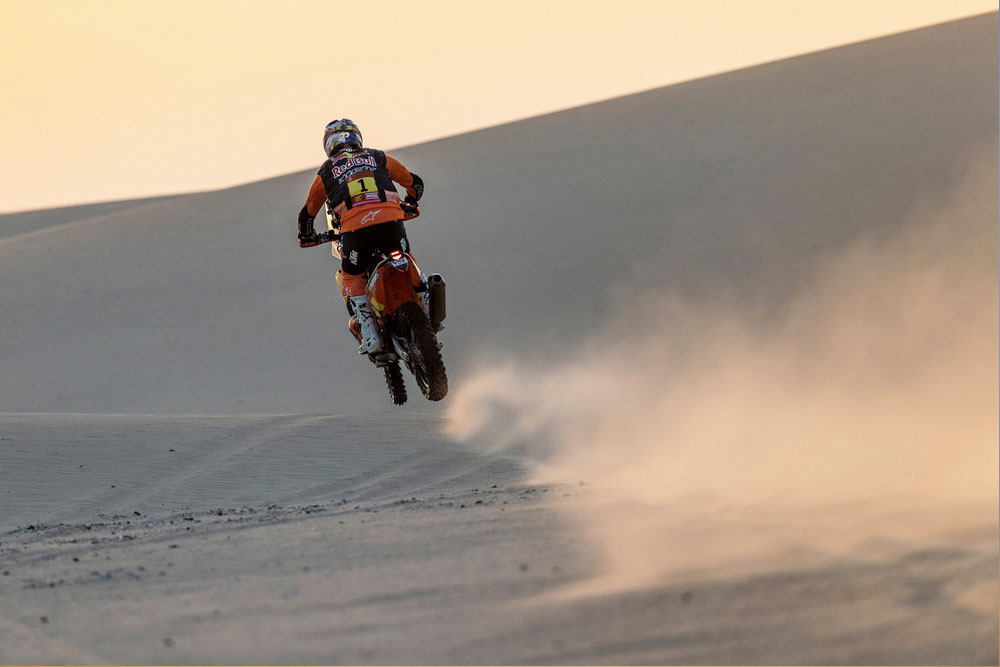 ‰ÛÏMy day has gone well. It‰Ûªs a little frustrating that the stage was cut short as I was planning on finishing a little further back to make up more time tomorrow," Price explained. "It is what it is and of course it was definitely the right decision to make regards safety. The good news is, the bike‰Ûªs in good shape and we‰Ûªre all ready for tomorrow. Unfortunately, I‰Ûªll still be starting quite near the front, so it‰Ûªll be tough to make up a lot of time on the leaders, but I‰Ûªm feeling strong and looking forward to the last couple of days.‰Û 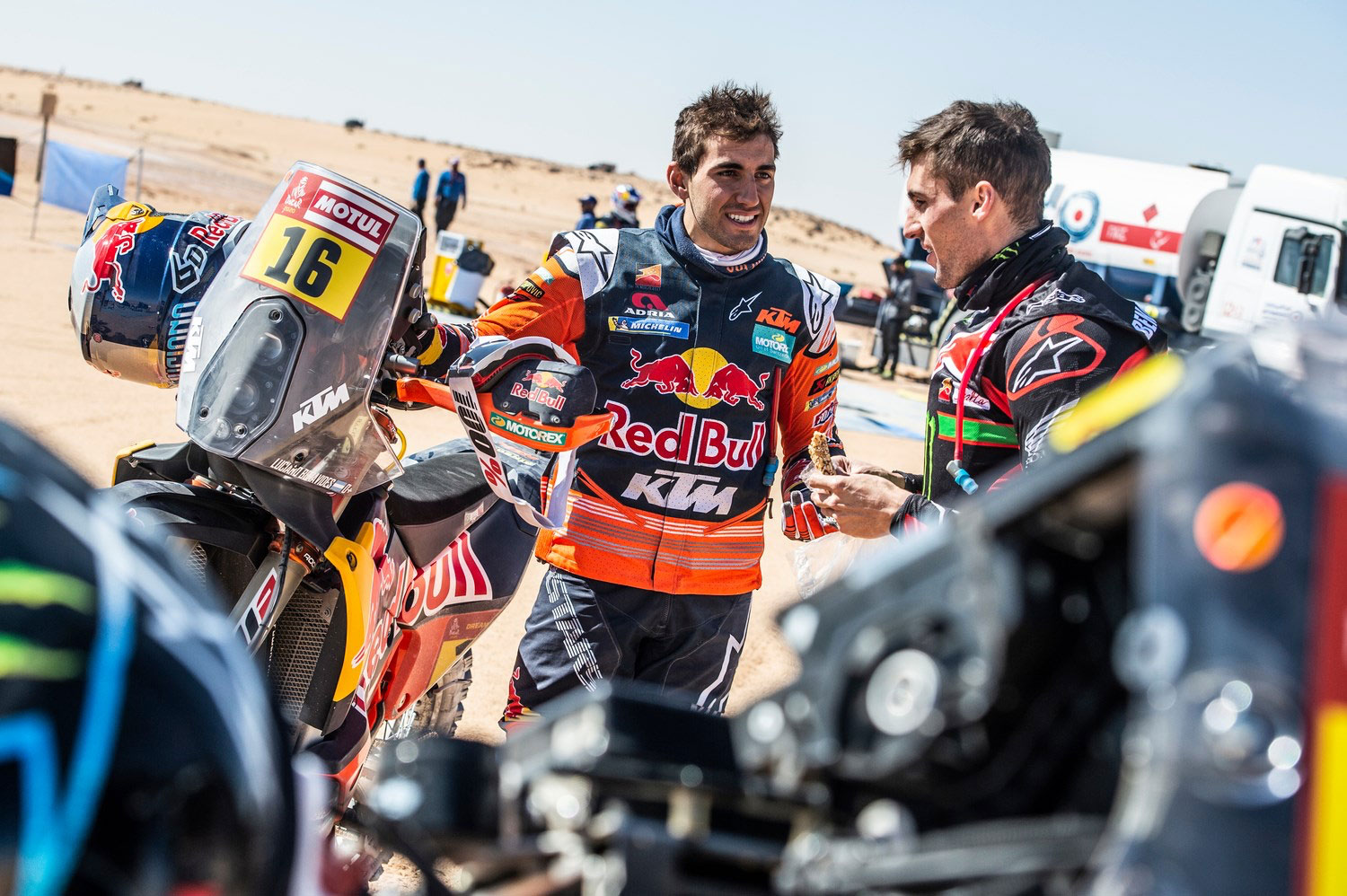 Luciano Benavides talks the stage over with brother Kevin before preparing for tomorrow's stage. Luciano finished fifth on stage and now sits seventh in the provisional overall standings. Photo: DPPI
Luciano Benavides put in another strong ride from his seventh-place starting position to move up into fifth by the fourth checkpoint. Placed seventh in the provisional overall standings, the young Argentinian trails teammate Matthias Walkner by just three minutes.

‰ÛÏIt was a good stage for me today ‰ÛÒ really fast, off-piste at the beginning with lots of broken dunes. There was one section with really tricky navigation, where a lot of people got lost," Benavides explained. "I did well there and got through without making too many mistakes and arrived at the refuelling in about fourth or fifth. After that, I had been looking forward to the last part of the stage through the big dunes, but with the stage cut short we didn‰Ûªt get to see that. My bike is good, with no problems, so I‰Ûªm ready for tomorrow.‰Û 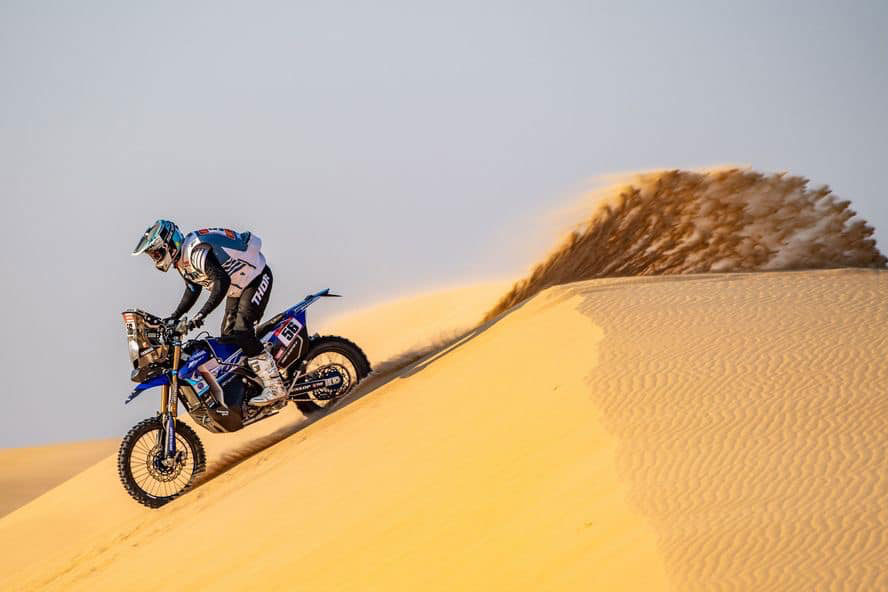 It was an eventful day for privateer Rod Faggotter after the Australian stopped to help and injured rider and then with his time restored ened the day with his best stage result of sixth. Photo: DPPI
Australian privateer Rod Faggotter had his best stage finish of this edition after being declared sixth for the stage. The Queenslander had stopped to help and injured rider and after his time was handed back he was left with his first tope ten stage finish with sixth, he remains thirteenth in the overall rankings.

"After restart I got the navigation perfect where lots of people got lost and I was given time back for assisting an injured rider," Rod said.

Dakar rookie Jamie McCanney, who stopped to help the injured rider along with Rod Faggotter, earned his highest stage finish of the event to date with the Monster Energy Yamaha Rally Team rider earning a well-deserved seventh place result.

Matthias Walkner had a steady day finishing eighth ahead of Pablo Quintanilla. 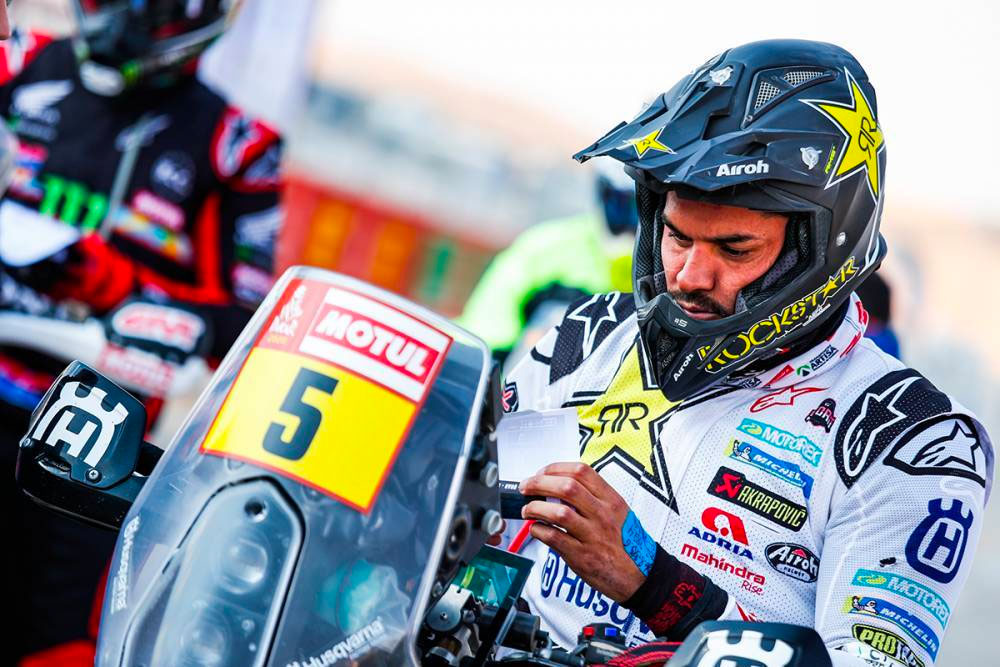 Pablo Quintanilla had a tough day opening the stage but only dropped six minutes and remains in second overall. Photo: DPPI
Opening the track, Quintanilla did an excellent job of navigating his way through the stage, losing the minimum amount of time to the chasing riders behind. The Chilean rider reached the refuelling stop in seventh place but was later revised down to ninth due to time restored to Rod Faggotter and Jamie McCanney, less than six minutes down on the eventual stage winner. Following the shortening of the day‰Ûªs proceedings, Pablo made it safely to the bivouac at Shubaytah. Enjoying an advantageous start position for tomorrow, the two-time world champion is in a strong position to make up time during the event‰Ûªs penultimate stage 11.

Thursday‰Ûªs stage 11 marks the second half of the marathon stage and returns to Haradh from the bivouac at Shubaytah. Totalling 744 kilometres, the day includes a challenging 379-kilometre special that will once again test riders‰Ûª navigation skills. 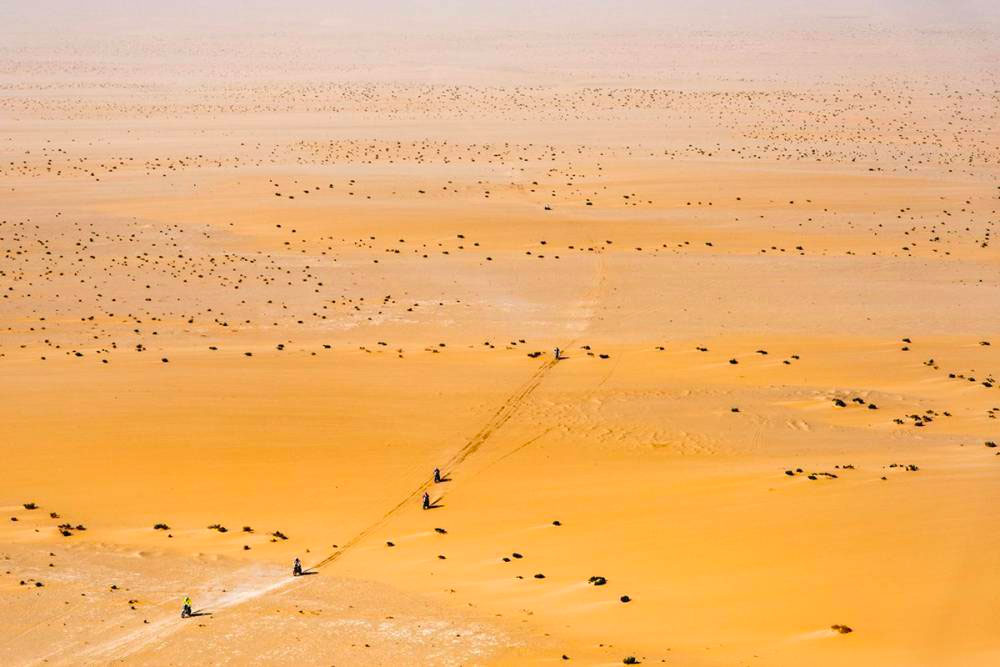 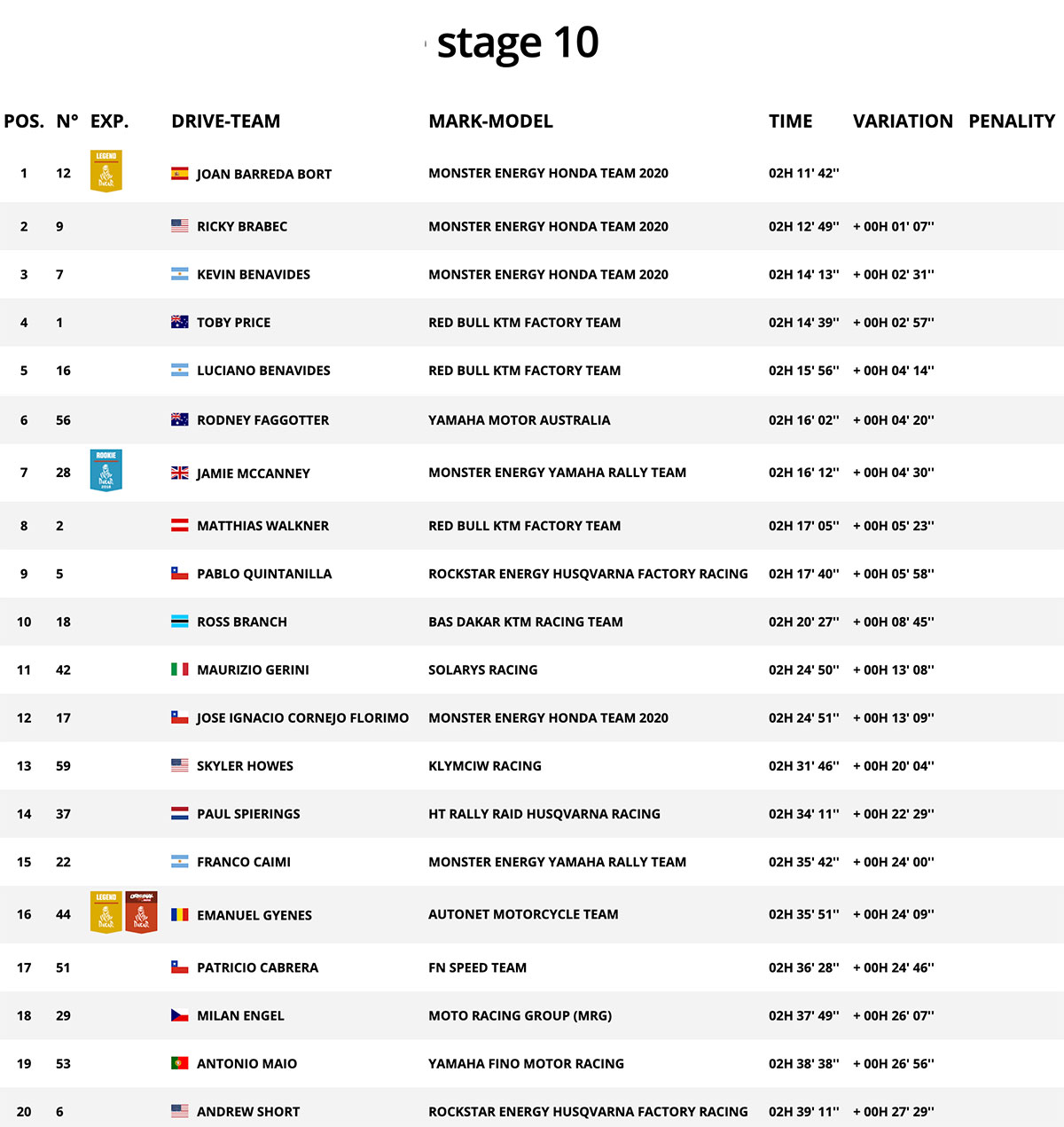 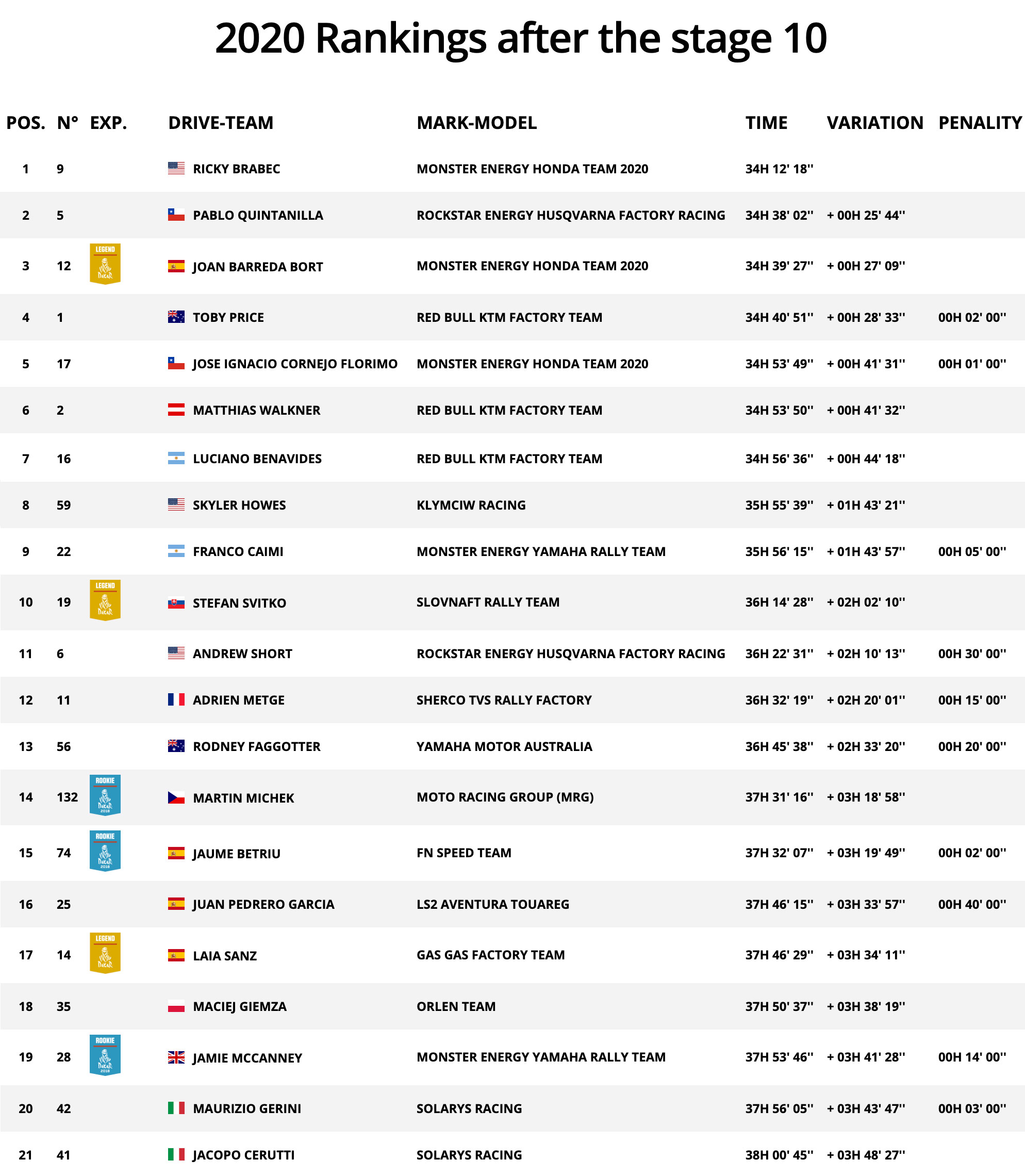