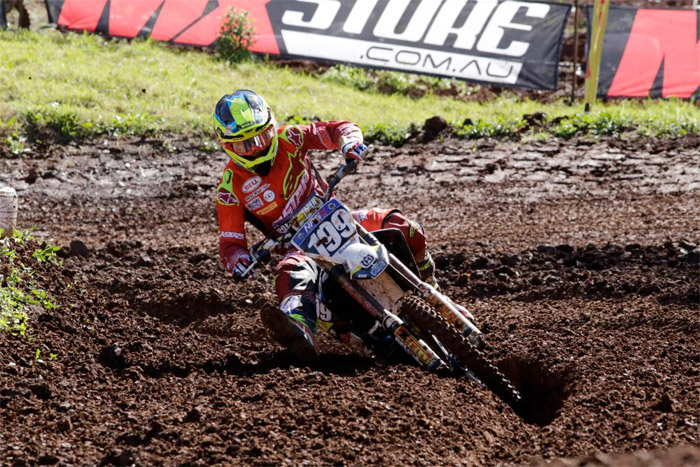 Husqvarna Australia‰Ûªs Nathan Crawford has reclaimed the Motul MX2 red plate, and will head in to the final round at Coolum as the championship leader, after a successful outing at Round 9 of the Motul MX Nationals at Toowoomba in Queensland today.

With both Crawford and DPH Motorsport‰Ûªs Jed Beaton tied on points for the Motul MX2 championship heading in to Round 9, it was a war on track from the minute bikes left the start straight at Echo Valley today.

When riders lined up for race one, the Motul MX2 competitors were treated to a venue jam packed with spectators, and when gates dropped for the first time, it was Davey Motorsport‰Ûªs Jayden Rykers who took the first MXStore holeshot, however CRF Honda Racing‰Ûªs Kyle Webster took no time in taking control of the race lead.

After only two laps though, it was a familiar sight with Crawford making his way to the front - proving that he was prepared to do whatever he needed to in order to fight for points at Toowoomba. Unfortunately for Webster, despite leading for a period of time, the Honda rider was forced to push his bike back to the mechanic‰Ûªs area, recording a DNF.

With Crawford out in front with a healthy gap on the field, the attention on track shifted to the fight for second position behind him, with Rykers attempting to hold off Serco Yamaha duo Todd and Wade Hunter, while Ward was also applying significant pressure behind them. But it was Ward‰Ûªs pressure which eventually paid off ‰ÛÒ by lap six the KTM rider had made his way by Hunter and Todd to slot in to third position, where he began to eye off Rykers rear wheel.

A notable absentee from the lead group was red plate holder Beaton, who at the seven lap mark was back in seventh position, and on a mission to make up time if he was to keep his championship hopes alive.

Unfortunately for Ward, a crash at the halfway mark in moto one forced him to drop from second back to fifth position, allowing Rykers and Todd to inherit a position each.

With less than half the moto remaining, Crawford continued to hold on to his lead from Todd who had gotten by Rykers, while privateer Tomas Ravenhorst had made his way up to an impressive fourth position. Despite his earlier charge to the front, Ward was back in fifth, followed by Raceline Pirelli KTM‰Ûªs Dylan Wills and Beaton who were in sixth and seventh positions respectively.

As moto two progressed, Ward and Beaton began to find their flow, and with only five minutes remaining, both championship contenders had made their way inside the top five.

But the man of the moment was Crawford, and when the chequered flag flew on race one for the Motul MX2 Class, the Husqvarna rider had not only won the first moto by eleven seconds, but had reclaimed the MX1 championship lead. Crossing the line in second position was Serco Yamaha‰Ûªs Todd, followed by Rykers in third.

Ward and Beaton wrapped up the opening MX2 race in fourth and fifth places respectively, while Wills, Kale Makeham, Ravenhorst, Keiron Hall and Joel Wightman completed the top ten in race one.

When race two kicked off after lunch, all eyes were on Crawford who was looking to go undefeated at Tooowoomba, but when gates dropped it was Raceline Pirelli KTM‰Ûªs Wills who snatched up the second MXStore holeshot for the day. However, Wills‰Ûª lead was short lived, the KTM rider going down in the top section of the track, and the top spot was then handed to Serco Yamaha‰Ûªs Todd, followed by points leader Crawford.

After three laps, Todd, Crawford and KTM‰Ûªs Ward began to separate themselves from the rest of the field, forcing DPH Motorsport‰Ûªs Beaton who was back in fourth position to ride hard in order to make up time and minimise the damage from moto one.

As race two reached its closing stages, Ward began to close in on Crawford‰Ûªs rear wheel, the KTM rider using every inch of the track in an attempt to make up ground. And it was as riders headed in to lap ten, that Ward made the pass on Crawford for second position.

In what was a huge upset for Serco Yamaha‰Ûªs Todd, the race leader‰Ûªs bike stopped with only one lap remaining, the Northern Queenslander unable to finish the race and handing the lead over to KTM‰Ûªs Ward.

And from there, all Ward needed to do was keep it on two wheels to cruise to victory, taking the final race win from Crawford, who finished second, followed by Beaton who inherited third. Webster wrapped up the final moto in fourth position, followed by Proformance Yamaha‰Ûªs Makeham in fifth.

Harwood, Hall, Wills, Tanti and Wightman all finished in positions inside the top ten in the final moto of the day.

But it was Crawford‰Ûªs consistency that paid off at Toowoomba, his 1,2 results seeing him awarded with the round overall as well as the Motul MX2 red plate. Second place on the podium was taken by KTM‰Ûªs Ward, while Beaton managed to salvage third overall for the round.

Husqvarna‰Ûªs Crawford now carries an 11-point lead in the Motul MX2 Championship with one round at Coolum next weekend remaining.

‰ÛÏI‰Ûªm feeling so good after today. I‰Ûªm loving being up here in Queensland racing in front of all my friends and family, and it was a really solid day for me,‰Û