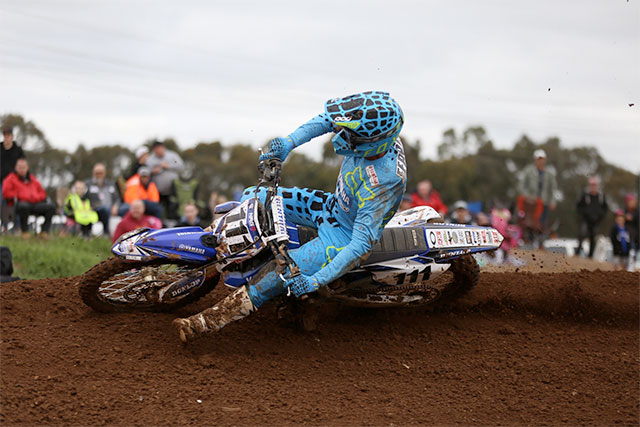 It was a day of frustration for the CDR Yamaha team as MX1 championship contender, Dean Ferris, made two small but costly mistakes that kept him from the top spot at round eight of the MX Nationals, held at Shepparton, over the weekend.

Persistent lead up rain made the tight Shepparton circuit difficult to ride with long, deep ruts and varying surface conditions that had riders and teams on their toes all day. Conditions like these are tailor made for a rider like Ferris and he was confident of a good performance and ready to make more inroads on the championship table.

After a good qualifying session, Ferris was ready to go for race one and instantly slotted himself into the top three as the field charged into their opening lap. He sprinted to the lead and tried to make a gap as his rivals jostled for positions behind him.

15 minutes into the race and Ferris was looking good, holding down the lead but on lap 10 he fell from his machine and as he rushed to get back on the bike, dropped two positions to be third. With time running out in the moto, Ferris desperately clawed his way to the rear wheel of the second placed rider, Kirk Gibbs, and made a bold move to take the spot with just one lap remaining.

Race one saw Todd Waters take the win ahead of Ferris and Gibbs as the three riders pursue the MX1 championship with spirit and vigor.

Race two saw Gibbs take the lead but Ferris slowly but surely closed in on the lead and by the half way stage, he was wearing Gibbs like a cheap suit. With less than a handful of laps remaining, Ferris went from the hunter to the hunted as he moved into the lead and inched out a small gap over his rival.

But on the final lap and with the race seemingly in the bag, Ferris went down allowing Gibbs to sneak by and pinch the race win.

In what is the narrowest of margins, the round victory went to Kirk Gibbs on 65 points with his 3-1 results, who won the day on a count back with Todd Waters who finished with a 1-3. Ferris took 64 points home with his 2-2 results.