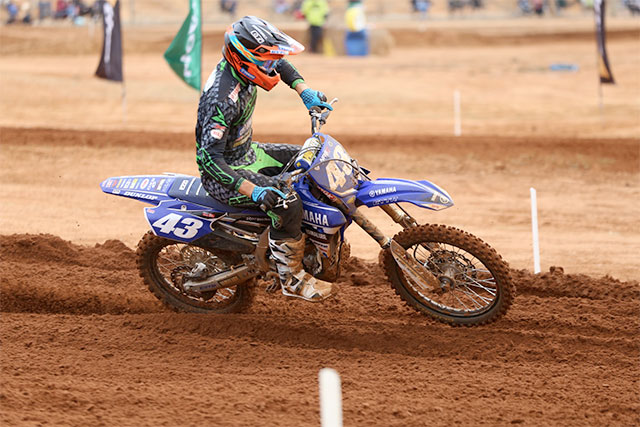 Crashes at crucial times proved to be the downfall for the Yamalube Yamaha Racing team at round four of the MX Nationals held at the Murray Bridge circuit in South Australia, over the weekend.

Both Mitch Evans and Jordan Hill fell from their machines while in good positions and those mistakes proved costly in the overall result for the MXD category in South Australia, with Evans coming home in fourth place and Hill landing in sixth.

Mitch Evans looked in good shape during race one as he clawed back a 14 second lead to be right on the race leader with a couple of laps remaining. As the pair charged down the superfast back straight at Murray Bridge, Evans clipped a track marking hay bale and was sent cartwheeling down the track in spectacular fashion. He quickly got to his feet and ran to his bike that was several metres down the track.

With bent handlebars and levers as well as a damaged radiator, Evans salvaged an 11th place finish in moto one.

Moto two and Evans was in no mood for mucking around. He shot to the lead at the end of lap one and simply motored away for the field. By the end of the 20 minute race, he cleared out to an impressive 22 second lead to win the race in a good bounce back for the day.

His 11-1 results netted him fourth for the round and he now sits in fifth for the championship.

‰ÛÏOn paper the result doesn‰Ûªt look great and it hurt me in the points, but I feel it was the best that I have raced this year and my speed was definitely better than the opening rounds,‰Û 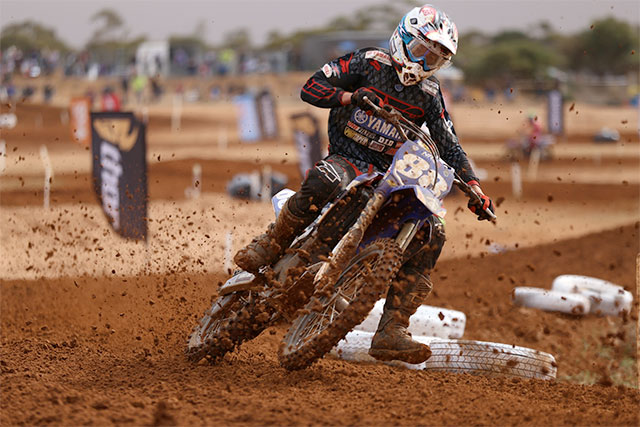 A crash in race two cost Jordan Hill any chance of the round win
Jordan Hill was also on track for a good day after charging his way through the field in race one to finish in second place. He relentlessly worked his way forward after an average start and to finish second was a good performance.

Moto two and Hill didn‰Ûªt get a great start but was beginning to move his way forward again when he fell and end up on the blind side of a jump. The following riders crested the jump unaware of the downed bike and rider as Jordan scrambled to move clear of the ensuing wreckage. When the track was clear, he was able to remounted and get back into the race.

He made his way back to 12th place at the finish and his 2-12 scores saw him finish in sixth place for the round. He now lies fourth in the championship.

‰ÛÏIt was a tough day as a hurt my leg in practice and it felt stiff and tight all day. Second in the opening moto was ok, although it took me a long time to get going but then all the good work was undone in race two when I lost the front end and fell by myself early in the race. I need to stop those little mistakes in my racing and keep it on two wheels,‰Û