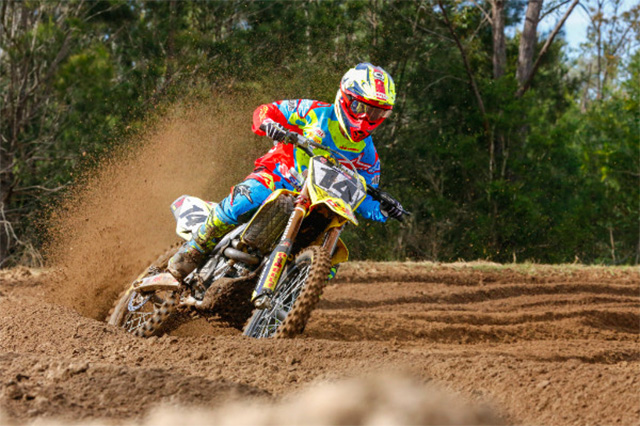 Wilson Coolair Motul Factory Suzuki‰Ûªs Kyle Peters ground out a tough weekend of racing in the talent packed Thor MX1 class, at Round 8 of the Motul MX Nationals at Port Macquarie yesterday.

With Sunday‰Ûªs racing marking the series‰Ûª first ever visit to the venue in northern New South Wales, Peters was optimistic heading into the event that he could capitalise on his ability to learn quickly and deliver the Factory Suzuki Team with improved results, however when racing got underway it was a lacklustre round for the American import.

Peters got his Round 8 campaign started with the 12th fastest qualifying time yesterday morning, meaning that the Suzuki rider would be forced to start with a mid-pack gate pick, on a track where starts were more important than ever.

In race one Peters started inside the top five, however a crash at the half way mark of the 30-minute moto whilst sitting in sixth saw the Suzuki rider drop three positions, eventually crossing the finish line in ninth.

In the second moto, unfortunately Peters was handed the same fate. Halfway through the opening lap of the final race of the day Peters went down once again, but despite re-joining the race in 18th position, the American rider charged back through the field to ninth place after the 30 minutes. With 9,9 race results, Peters wrapped up the Port Macquarie leg of the MX1 championship in ninth overall.

‰ÛÏRound 8 wasn‰Ûªt the greatest. I really struggled all day with myself and I never really felt comfortable or clicked with the track,‰Û