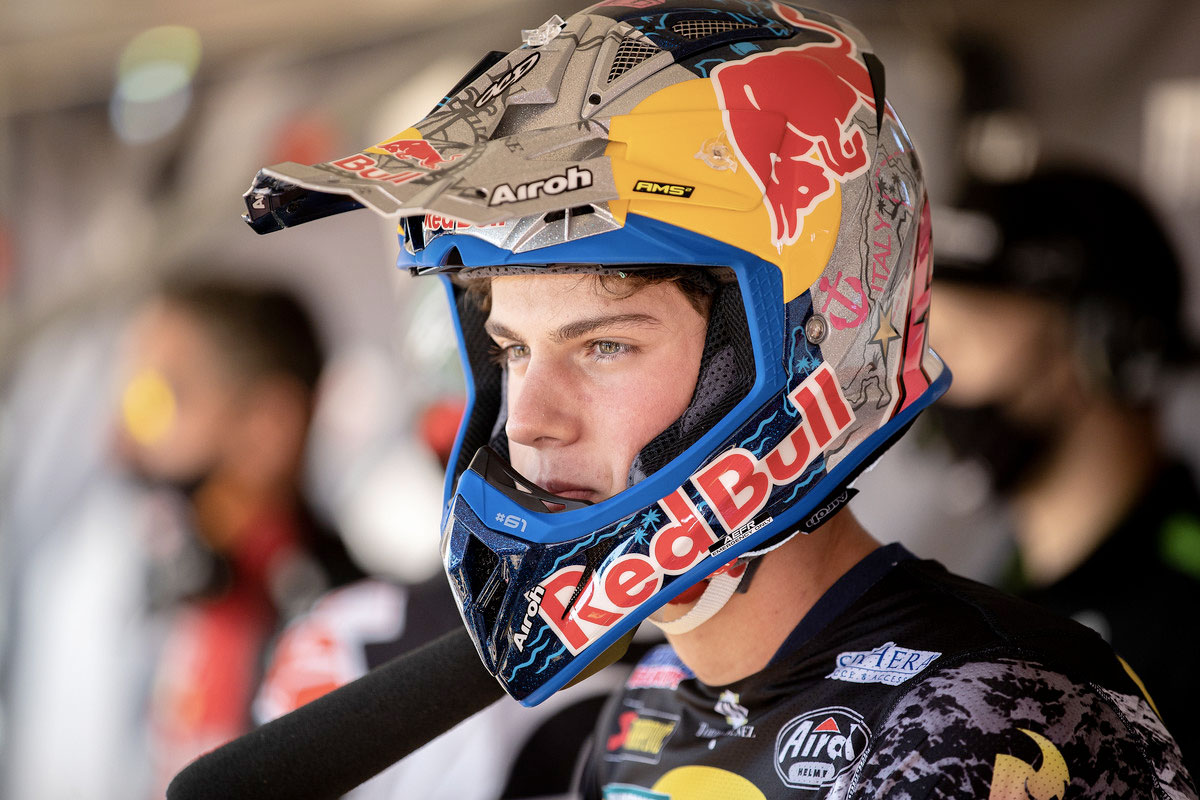 Photo: Ray Archer
World MX2 Motocross Champion Jorge Prado recently became one of the the highest profile motocross riders to suffer from the Covid19 infection just as his move to the MXGP class was hitting its peak.

the 21-year-old Spaniard recently sat down to talk through what it's like to be a victim of the pandemic and the cost in terms of his momentum.

The situation was a bit daunting. Jorge and his girlfriend lived isolated upstairs; his mother, also infected, was confined in the living room; the father and the sister attended to the "patients" with all the precautions, delivering food here and there. Luckily, none of them were really ill, but their home in Lommel has become one of those sources of infection and attention that they previously only saw on the news.

Jorge is well: "I have improved a lot, I can now breathe deeply without problems, before I did notice that it was difficult for me to take air without coughing, but now I am fine and I am recovering my smell and taste". Everything had started on his arrival in Belgium, he felt bad the first weekend and went racing with what he thought was a simple cold. On Wednesday, for the second round in the Belgian sand, the cold had not disappeared and he was weak again: "It was difficult for me to breathe and I had to make a great effort because my heart rate was very high, I really had a very bad time." Still, that suffering took him to the top of the podium.

And then the positive came ... 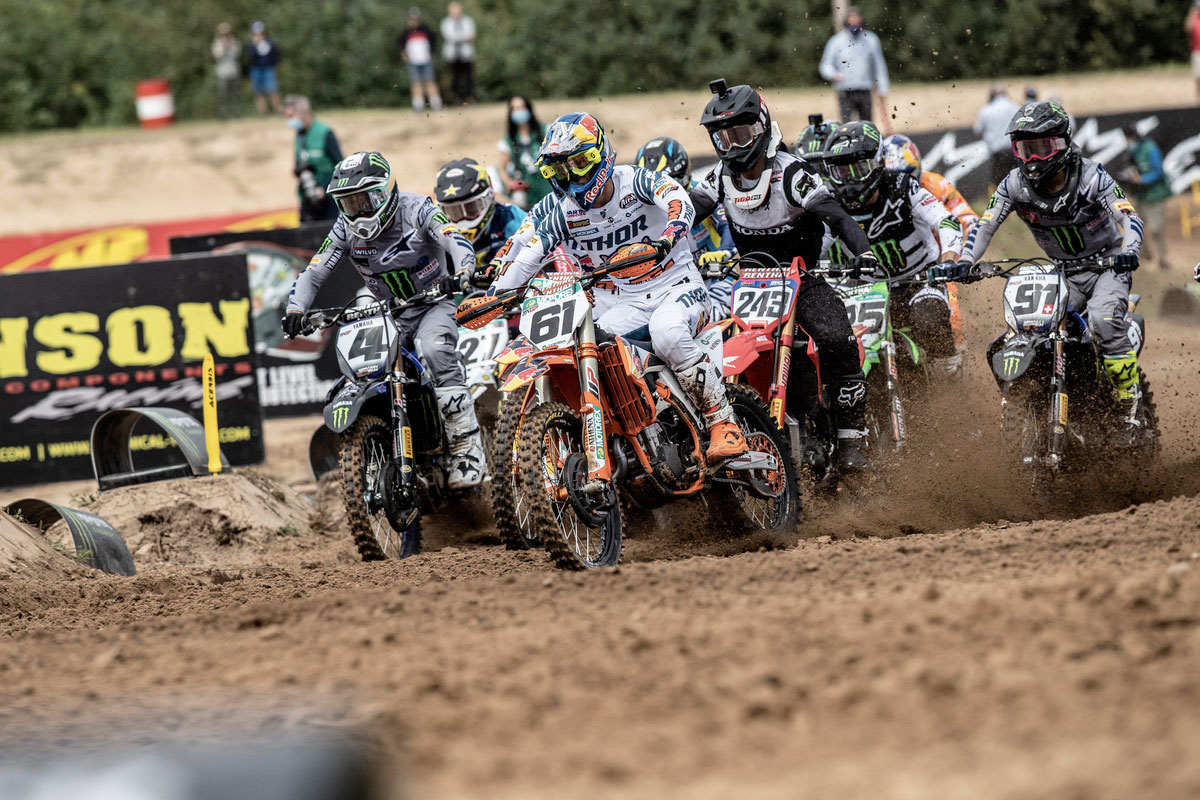 Photo: Ray Archer
"On Thursday I was recovering and on Friday we went to train to set up the bike. I was happy because we had done a good job and I was feeling very well, things were looking good for Sunday ... But suddenly the news of the positive, I did not understand anything, it was something surreal, a situation beyond my control. We were talking, the call came and everyone moved away from me... You feel like a pest."

In that moment and after going into quarantine, Prado underwent further tests, in which he tested positive again. Consequently, he went to several doctors to analyze his situation: "I thought I could race in Arco and I expected the PCR to be negative, but both the pneumologist and my sports doctor said that this was not a joke and that I should forget about racing. A lung infection can leave serious sequels and an elite athlete needs one hundred percent of his lungs, so there was no point in taking the risk because I was still very tired, it was difficult for me to breathe and my defenses were low."

Now that you have lived with Covid in your body and in your family, what message do you send to people?

"That they take it very seriously and be aware that this is no joke. I am a professional athlete and I have minimized the risks of contagion and yet I have been infected without knowing how. It is a strange disease, at home each one of us has had different symptoms, but it is clear that it is easy to spread and be infected and you cannot joke around with a disease which can kill you."

"I feel that I missed an opportunity" 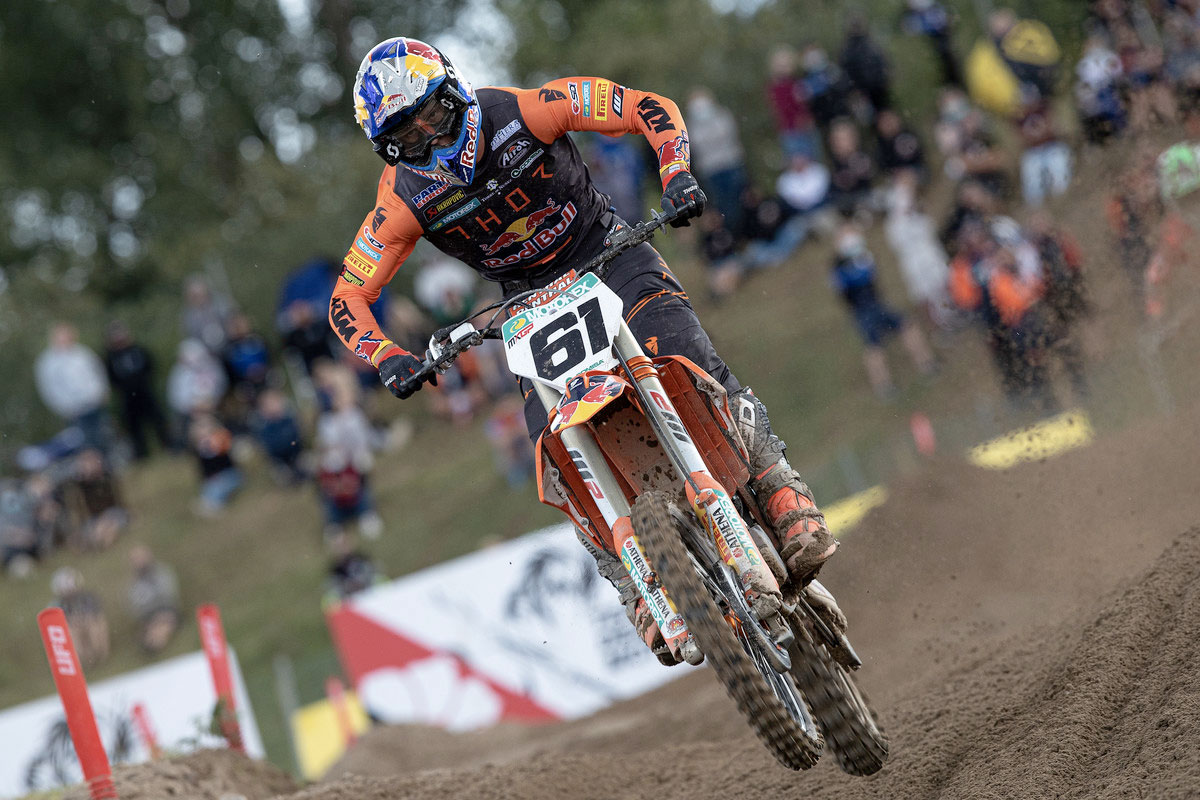 Photo: Ray Archer
In the psychological aspect the defeat was much greater. In terms of performance, Jorge was in the sweetest moment of the year. He had dominated in Spain, was consistently on the podium and had fully adapted to the MXGP class: "I totally have the feeling of having left something half done. I was in very good shape, I had set up the bike well and I think I could have won more races. I feel like I missed an opportunity, maybe not to be first, which was going to be very difficult, but to secure second place and put pressure on Gajser."

Were you at your best level?

"Yes, I think Gajser and I were a step above. It has been a very difficult year, but in constant progression. Coming from injury we have walked a very hard path advancing little by little towards the objectives, first the Top 10, then the Top 5, then the podium, the first victory, the first race win, the first GP sweep... Always progressing."

It seems that everything happened to you this year ...

"Of course, femur and collarbone fractures, mechanical problems, unfair penalties and now Covid, it is hard to imagine anything worse. That is why I am excited about the new year, because I know that so many bad things are not likely to come together again."

Even so, it's been a great year, right? 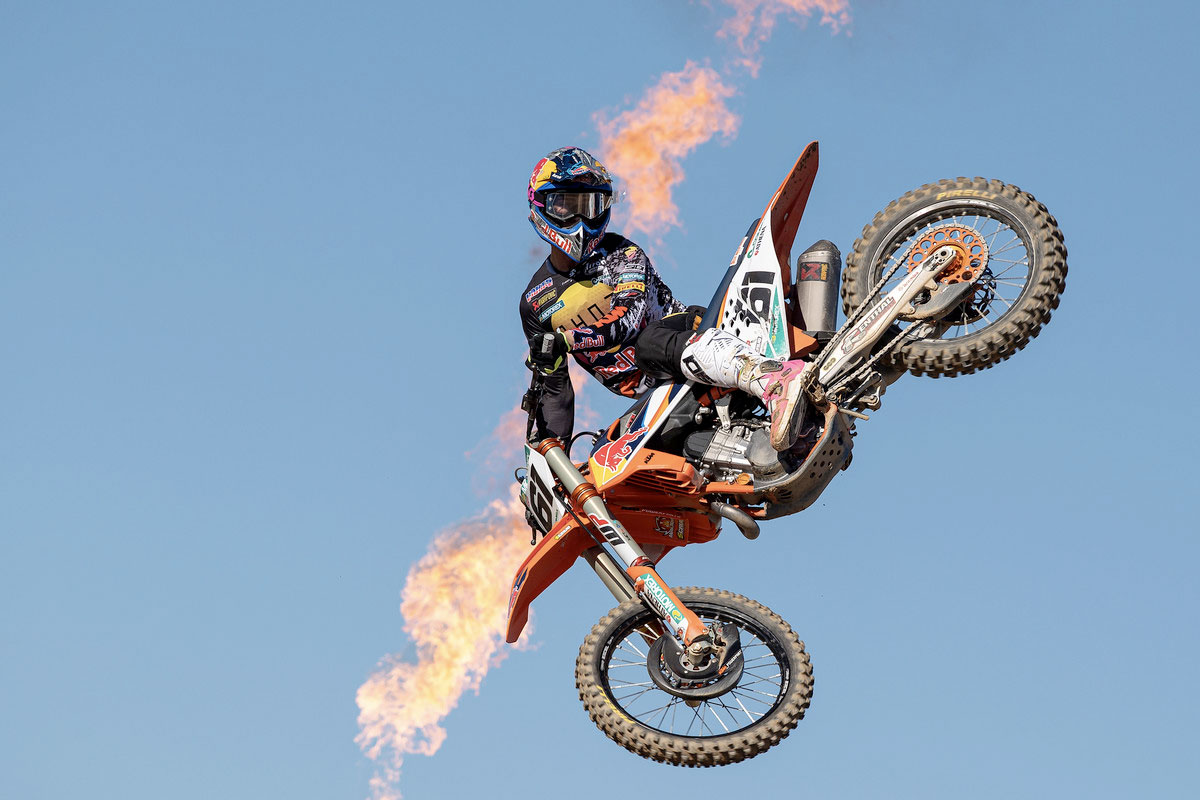 Photo: Ray Archer
"Of course, I brought home four grand prix victories. Although one did not count, for me it is a victory because I know I won on the track. And I will always remember that two-race sweep in the Spanish Grand Prix, it was undoubtedly the highlight of the year. Racing in your country, for the first time in MXGP, and dominating is the best. You always race with pressure not to disappoint your home fans, but if the result is good, it makes up for everything. Without the spectators it is not the same, though, so I hope to repeat the experience in 2021 with the venue full of fans."

Do you miss your country a lot?

"I'm really used to living a bit like a nomad since I was little, but of course I miss it. Although I always have contact with family and friends and I have sponsors like Torre de NÌ¼Ì±ez, who are from Lugo, they send me ham and they always make me feel close to my land."

"Yes and I am very excited. It is my home, it is where I started riding a motorcycle and it is a way to give new fans an opportunity to practice this sport, which is not always easy."

When the world championship ends on Sunday, the classification will deny Jorge Prado most of his merits, but the fans and the paddock in general know very well that the Lugo native has had a great rookie season. Despite the many setbacks, he has reached the highest level and has played the Spanish anthem four times. One of those podium ceremonies had to be repeated after a penalty made him lose positions. A situation that seemed unfair to him and that opened a certain debate on safety: "I have already said that for me it was a clear victory and I prefer not to get into the controversy. What we can take from situations like these is that we must make safety our priority, in terms of the flags as well as track maintenance and some other things." 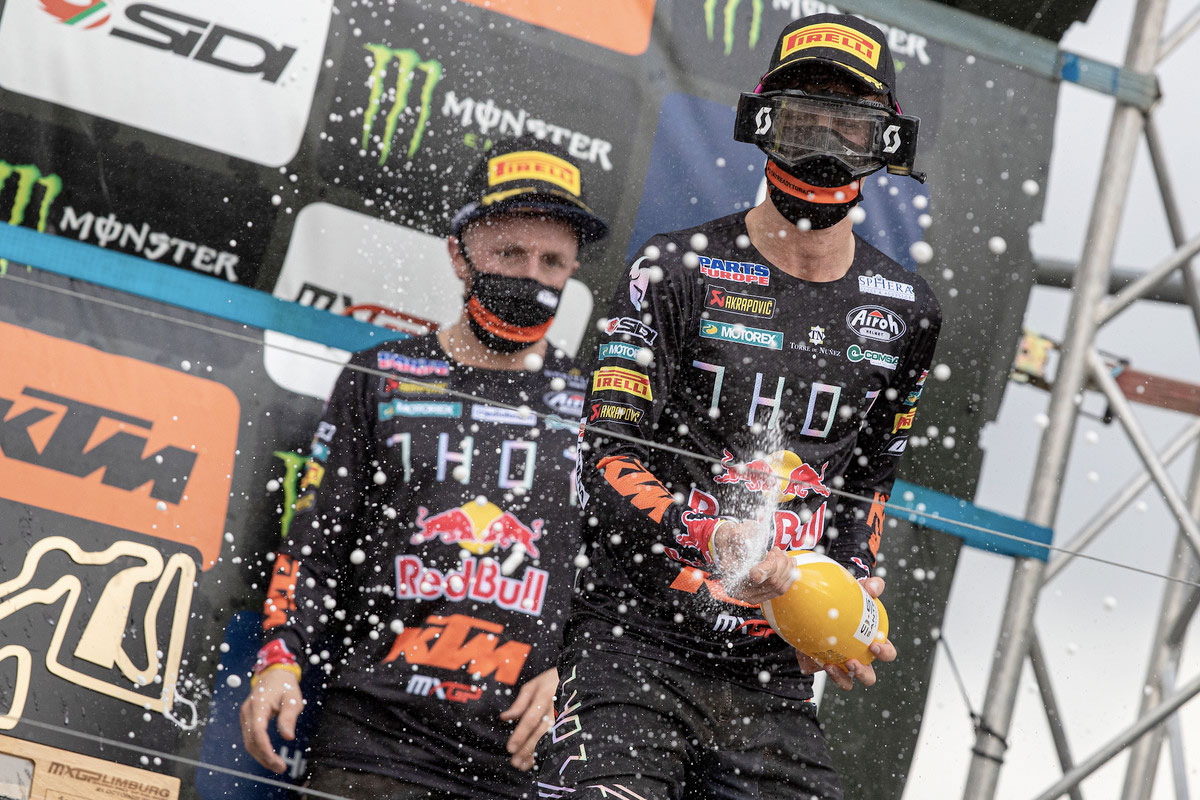 Photo: Ray Archer
And in such an atypical year, how have you adapted to the racing format?

"Well, I liked it. I like having three races on the same venue because you keep improving and learning every day and it is comfortable for the teams. I also like the compressed format on Sunday because it saves the effort and risks taken on Saturday, which did not contribute positively anyways. The only thing I don't like is racing without an audience. Without the atmosphere and the support, you lack motivation and you even get more nervous. Besides, it is part of the essence of this sport.

About your competitors, you have only talked about Gajser...

"Yes, Gajser has been very strong in this season finale. Herlings was also very strong at the beginning. I really haven't had the chance to race him face to face in optimal conditions, I don't know what would have happened... Maybe he would have beaten me in Lommel, but not in Madrid. We'll see next year."

Yes, it will have to wait until 2021, a year that Prado and the rest of the world expect to be totally different from this 2020. A new season for which the Galician will soon begin to prepare. First a few days of rest and work at his home in Rome, then a few days in Spain before starting the tough physical preparation prior to returning to the track: "I hope to have a good off-season without setbacks, to reach a good level and put myself in contention for the title. I know it will take a lot of work and training very hard, but I am prepared. Of course, above all I hope it will be a year without Covid." Words spoken by someone who has been cruelly bullied by the pandemic, even if only in what concerns his sportive career. 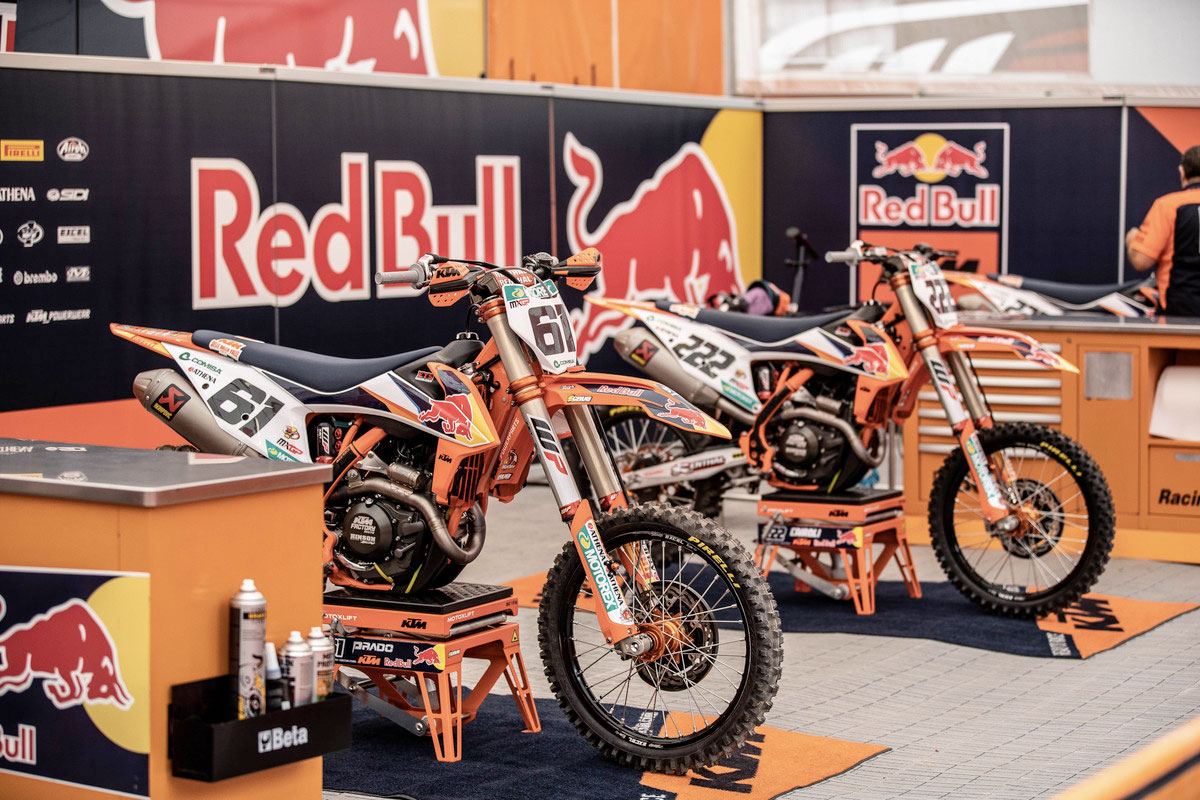