Courtney Duncan takes the good with the bad in France 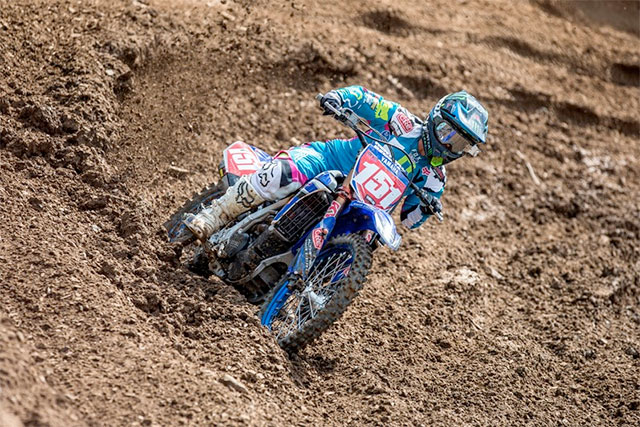 New Zealand's Courtney Duncan is still on target to win her first motocross world championship crown and this is despite her suffering a massive set-back in France at the weekend.

The 21-year-old Altherm JCR Yamaha Racing Team rider from Otago crashed out of her first of two Women‰Ûªs Motocross World Championship races at Ernee, in north-western France, the third round of six in the series, but she bounced back to win the next race the following day.

It was a case of damage limitation for the Kiwi heroine after the tragedy of having another rider clip her while in mid-air in race one, sending her sprawling to the ground.

She picked herself up and fought back and was challenging for second position when she crashed again.

She was cleared to race the following day by medical staff and Duncan's response was inspirational as she battled through traffic to eventually take a three-second win over the previous day's race winner, French world champion Livia Lancelot (Kawasaki).

"I was happy with my performance in that race," said Duncan afterwards.

"I learned a lot this weekend about my race management. It was frustrating to not finish the first race but it was 100 percent my fault."

Fellow Yamaha star and Italy's former world champion Kiara Fontanesi now leads the series thanks to her 4-3 score-card in the two races at Ernee, while Lancelot won the day on her home turf with 1-2 results and she has moved up to second in the championship chase, just ahead of the luckless Duncan.

With the series now at the halfway stage and the leading riders all tightly bunched on the points table, anything is still possible.

Duncan has slipped from six points clear at the top of the standings to now be third overall, albeit just six points behind Lancelot and only seven behind Fontenesi.

"We are still in the championship hunt. We are fast enough but I just have to be smarter with my race craft," said Duncan.

Duncan will remain at her Belgian base as she prepares for the next WMX round, set for the Czech Republic on July 22-23.