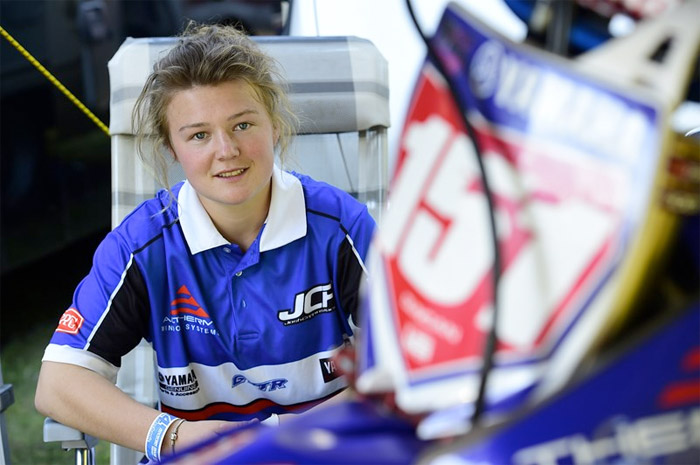 Courtney Duncan will race again in Switzerland, and returns to Europe this week from an extended recovery in her native New Zealand after a May crash in Germany sent the FIM Women's Motocross World Championship red plate leader out of competition with injuries to her wrist and ankle.

Duncan went in for surgery back home and sat out for the WMX rounds in France and Lombardia. Despite three moto victories in her first four WMX starts, she readily admits that the 2016 points race is now beyond her grasp.

"I'm not worried about where I finish up in the championship now, that's been ruined for me. It's all about setting myself up for next season," Duncan said.

In her second Grand Prix at Valkenswaard Duncan placed fourth in Saturday's first moto following a crash in deep, wet sand, but followed up in the second race on Sunday with a 25-second victory gap over former World Champion Livia Lancelot of France to hold on to her championship points lead and the WMX leader's red plate.

In Germany Duncan finished 12th in the first moto but was forced to retire from the GP overnight after a collision with an errant photographer during the race sent the rider to pitlane with a bent handlebar and injuries to her ankle and thumb. Lancelot took over the leader's plate and after successful outings France and Italy now leads the competition with 221 points. Duncan has fallen to eighth overall with 102 points and two more weekends of WMX Championship racing in Switzerland and Assen.

Coppins said Duncan followed up in New Zealand with surgery and light training, but has stayed off the motorcycle for nearly two months in recovery.

"Courtney had a pin inserted in her thumb to rejoin the ligament and was in a brace for six weeks. She hasn't had any physio, it's been just rest and stay in the brace, so we expect some pain when she begins riding," Coppins said.

"I can't wait to get back on the bike again. My fitness is pretty good because I've been in the gym and cycling a lot over the past six weeks. I've got two and a half weeks before the GP in Switzerland, but I should be all good to go," Duncan concluded.