Starting the final round of the series four points shy of the points-leader Nancy Van De Ven,the twenty-three year old from Dunedin in New Zealand immediately stamped her authority on the event by claiming pole position in Qualifying but her immediate rival for the title parked directly inside Courtney at the start gate for race one and the Kiwi girl found herself on the ground halfway to the first corner as they touched.

Losing twenty seconds to the race leader before turn one, and separated by twenty-six other riders, the Kawasaki rider kept a cool head and started an unbelievable catch-up race; already thirteenth by the end of the opening lap, but continually forced to leave the ideal racing line to make passes, she was third by the end of lap four but the gaps to the girls ahead were enormous as the leaders had enjoyed a free track.

Just past half-distance in the twenty-minute-plus-two-lap race Courtney moved into second place; however race leader, Van De Ven, was still twenty seconds ahead.

Relentlessly closing down her rival Duncan jumped into the final lap on the leader‰Ûªs rear wheel and swept majestically to the front with a decisive move around the outside at the next turn to hold the inside at the following corner and come home winner by just over two seconds. The six-point last lap turnaround meant she carried a five-point advantage over each of her closest rivals into the final moto of the series.

Each of the title candidates steered clear of trouble at the start of race two with Duncan initially fourth; secure in the knowledge that third place would be sufficient to retain the world title, no matter how her rivals fared, she took over that position with a neat inside pass on the opening lap, advancing to an even more secure second on lap three before settling into a solid error-free rhythm. 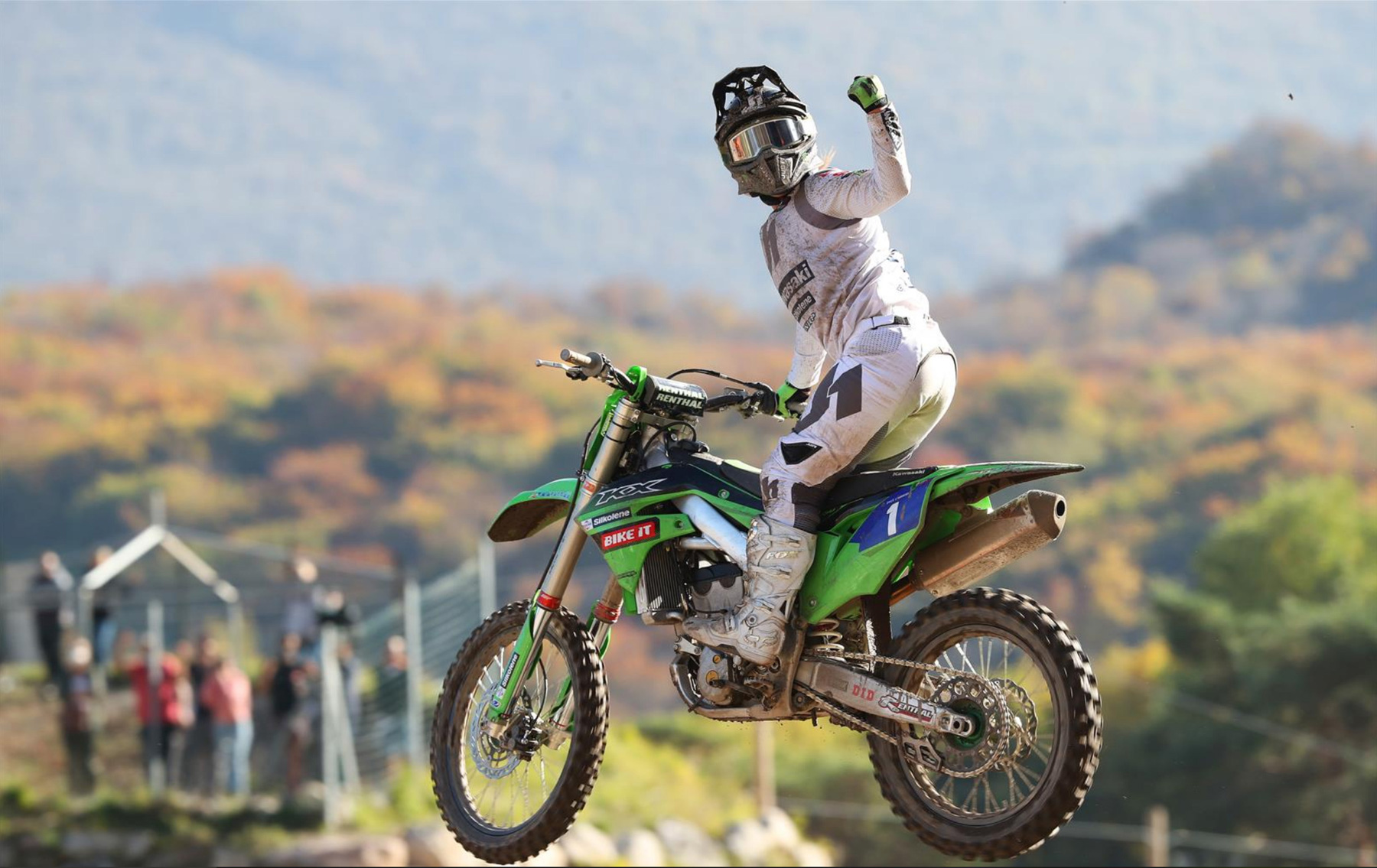 Courtney Duncan celebrates here 2020 World Championship win
Backmarkers made life ever more hectic as the race entered the closing laps and the Kiwi girl sensibly avoided potentially dangerous situations to bring it home third, sufficient to secure not only her second consecutive world title with Kawasaki but also her fourteenth career GP victory from twenty-five starts.

‰ÛÏIt‰Ûªs just an unbelievable feeling right now ! I dreamt of these days when I was a kid; I‰Ûªve worked fifteen years of my life for moments like this." Duncan enthused. "This year has been so full of uncertainties with Covid and our own challenges. Like the crash in Mantova when I got back to my bike and the bars were snapped; it felt as though the championship was gone in the blink-of-an-eye and I‰Ûªm so proud how we fought back, stayed positive and confident to come out on top for a second year.

"Massive thanks to the entire team - you can‰Ûªt do it alone ! ‰ÛÒ but we got it done. There was so much pressure on each of us coming to the final round with the points so close; it was a matter of winner-takes-all and you have to rise to the occasion.

"I actually got more excited by the situation." Duncan continued. "These are the moments that count; I stood up and rose today and that‰Ûªs why I‰Ûªm champion. I fell down at the start of the first race but thankfully some more went down at turn two; I just never gave up, put it behind me and concentated on pulling back as many places as I could. Potentially I got a few gifts, particularly when Larissa fell on the last lap, but I gotta thank my crew for keeping me posted; I‰Ûªm proud of the way I stayed composed and I was just in my zone all race. Such a crazy race and it put me in the right position before race two.

"I knew the points so I didn‰Ûªt need to take any risks. I stayed out of the chaos and tried to stay focused through the last laps but I don‰Ûªt want to take it away from the girls in front who were riding so good; I let it play out in front of me and took the overall today and the championship. It was so close in the end.

"We were all put under-the-pump knowing it was tight coming to the final round but thankfully I got that moto win in race one and that made the difference. I just want to enjoy this one this evening but 100% sure I want to make it a three-piece with Kawasaki next year !" Duncan concluded. 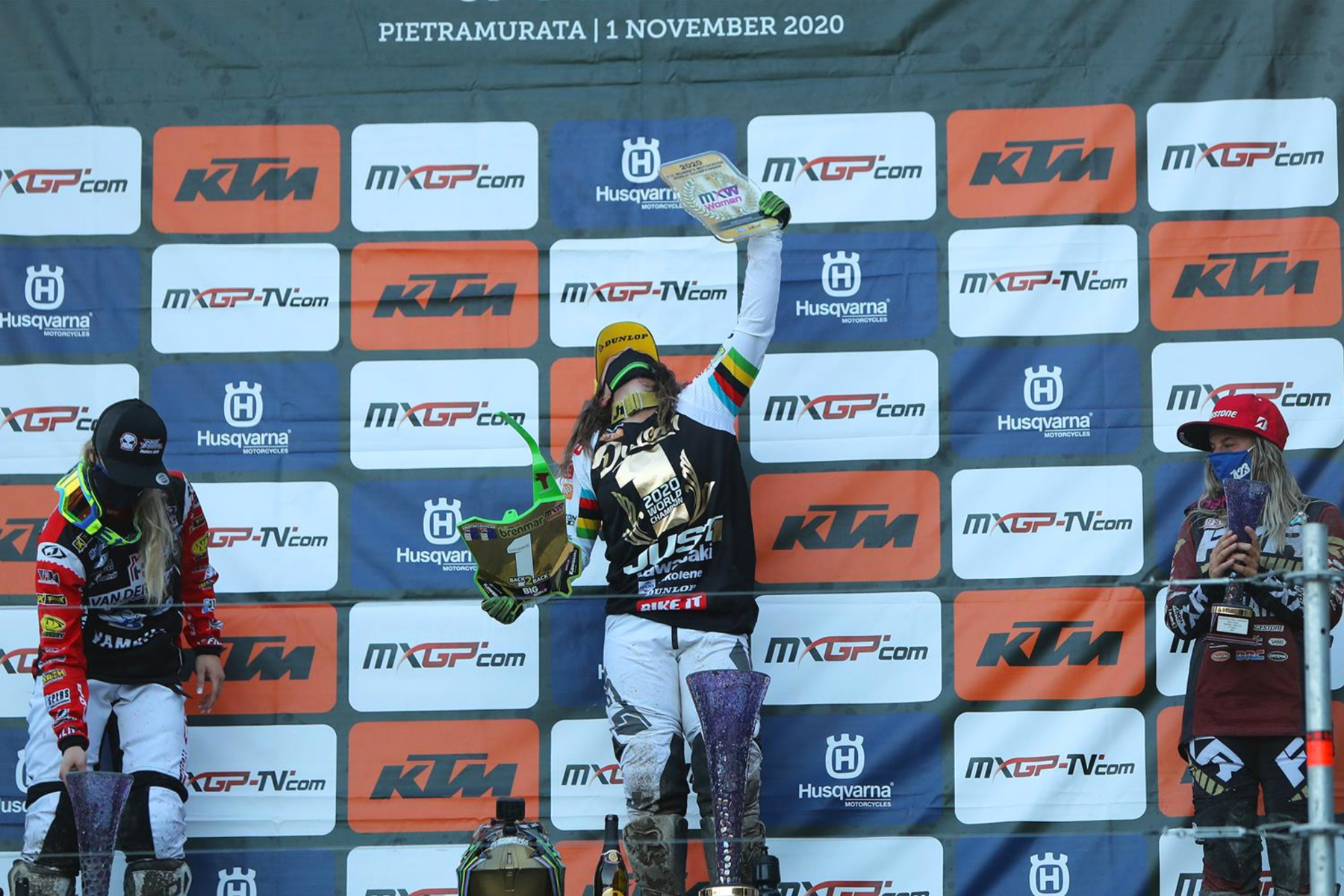