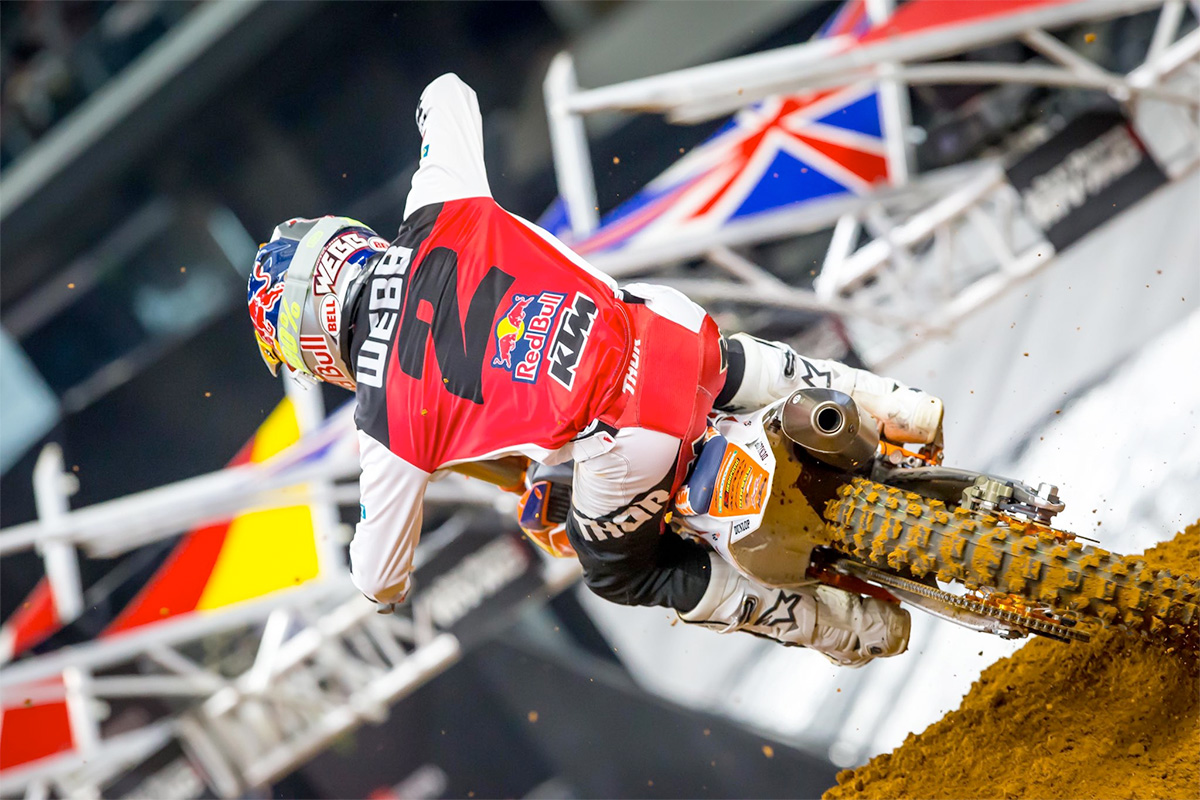 Cooper Webb took his fourth win of the season at Arlington. Feld
Round Seven of the AMA Monster Energy Supercross Championship provided plenty of action in Arlington Texas with Cooper Webb taking out an edge of your seat thriller in the premier 450SX class while Austin Forkner continued his domination in the 240SX East Coast class.

Championship leader Ken Roczen took the opening 450SX heat win by a comfortable four seconds. JGR Suzuki Racing's Justin Hill completed the whole race in second while Monster Energy Kawasaki's Joey Savatgy and Rockstar Energy Husqvarna's Dean Wilson waged a nine-lap battle for third with Savatgy winning the fight. Honda's Justin Brayton was fifth after holding off a hard-charging Aaron Plessinger. Zach Osborne made an impressive return to racing finishing in the final qualifying spot despite being run over at the start and having to make his way through the field.


Aussie Chad Reed blasted out fo the gate with the holeshot in heat two. HRC Honda's Cole Seeley and Monster Energy Kawasaki's Eli Tomac soon worked their way past the JGR Suzuki Factory racing rider. While Seely and Tomac battled for the lead KTM's Cooper Webb made his way up through the field after an average start to claim third off Reed. In the end, Seely held of Tomac for the win, making it a HRC Honda double, while Webb made his way to third. Blake Baggett demoted Reed to fifth while Justin Bogle held off Marvin Musquin for sixth. Monster Energy Yamaha Racing's Justin Barcia was the victim of a perfect centre punch from Tyler Bowers and was sent to the LCQ, Bowers on the other hand was disqualified from the rest of the night! Barcia went on to easily win the LCQ. 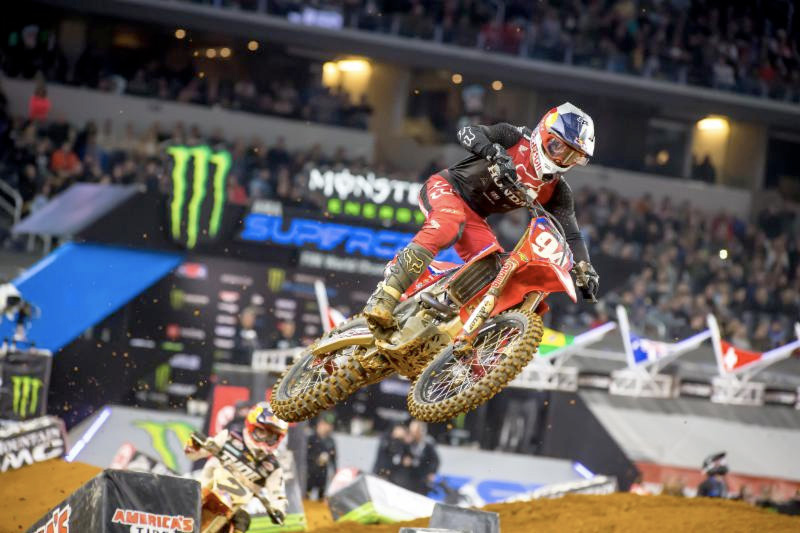 Ken Roczen led all 20 Laps of the 450SX Class Main Event only to surrender the lead and victory to Cooper Webb in the final turn. Photo Credit: Feld Entertainment, Inc.
The 450 main opened with a flurish as heat winner Roczen took the holeshot but it was Tomac who quickly took control as Roczen, and Musquin squared off as Savatgy paid the duo some close attention. Savatgy, Baggett, Webb, Seely and Hill all filled the top ten.

For four laps Tomac, Roczen and Musquin were all within a bike length before Roczen made his move into the lead on lap five. The duo went wheel to wheel until Tomac tucked the front end and crashed, dropping down to seventh. This left a trio of KTM's in Musquin, Baggett and Webb to fill out the next three spots behind Roczen. With nine minutes to go Webb demoted Baggett to claim third and set out after team-mate Musquin. In the closing minutes, it was Webb who was laying down the fastest laps and putting loads of pressure on Musquin as both drew closer to Roczen. With three laps to go Webb got by his team-mate and set out after Roczen.

The final three laps were a nail biter as Webb laid down some serious pressure on Roczen, but the German never faltered. It took a no holds barred move on the final corner for the KTM rider to grab the advantage and take the win by an incredible 0.028 of a second. The win sees Webb log his fourth win of the season and take back the championship leaders Red Plate. Musquin and Baggett took third and fourth while Savatgy held of Cole Seely for sixth 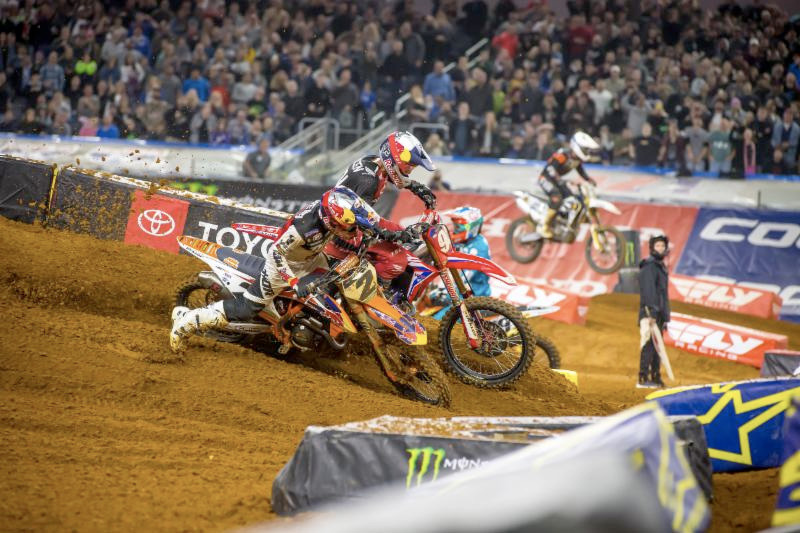 Cooper Webb (2) overtaking Ken Roczen on the final turn of the 450SX Class Main Event. Photo Credit: Feld Entertainment, Inc.
After going through the LCQ and then running off the track at the start, Justin Barcia put in the ride of the night to claw his way back to seventh Chad Reed finished the night in eleventh. Eli Tomac's night went from front runner to twelfth after his crash.

‰ÛÏTonight was incredible! Webb said. "I just never gave up out there. It was incredible for it to come to the last lap ‰ÛÒ the last turn even ‰ÛÒ and to be able to win with such a close finish was absolutely insane. That‰Ûªs probably the best race ever for me.‰Û 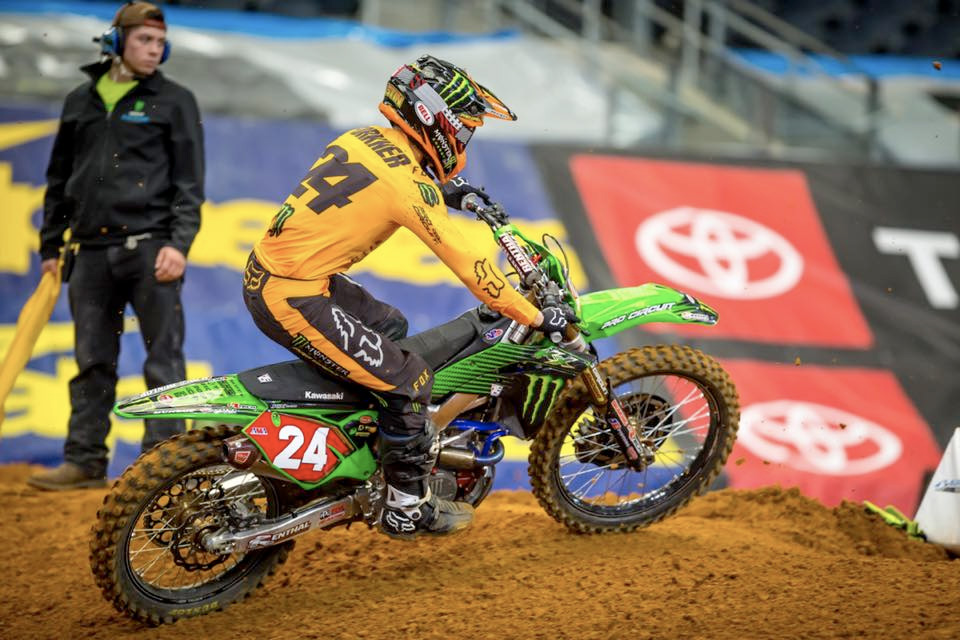 Fastest qualifier Austin Forkner grabbed the holeshot in heat two but a couple of small mistakes on the opening lap allowed Jordon Smith to take the lead. While Smith controlled the lead for the first three laps Forkner had his Monster Energy Kawasaki team-mate Martin Davalos paying him some close attention as hometown hero Blake Wharton waited in the wings. Once Forkner made the pass for the lead he made a few small mistakes but eventually went on to take a two second win to reamin undefeated so far in 2019. Smith held on for second ahead of Davlos and Warton. JGR Suzuki Factory'a Kyle Peters rounded out the top five.


When the gate dropped on the 250 Main, it was Kyle Peters with the holeshot, but current championship leader Forkner wasted no time in demoting the JGR Suzuki Factory rider to second. Sexton and Smith soon moved into second and third as things began to settle down. While Forkner settled in out front his team-mate Martin Davalos and Justin Cooper were the only ones in any kind of battle as they fought over fourth place.

By mid-race the top ten all had a two second gap over each other with not much in the way of battles at all. Forkner had pressure from Sexton but once the Honda rider stalled near the end Smith and Cooper pounced taking over second and third. From there it was Forkner who went on for the win and remains undefeated in all six races he has contested in the opening two rounds. Smith dropped it on the final lap to lose what looked like a certain second place. Cooper held of Sexton for the final podium places while Smith rebounded for fourth. Davalos was fourth ahead of heat winner Mitchell Oldenburg.

‰ÛÏMan, this weekend felt good! I felt great all day but I struggled a bit in the main because I was so focused on what I needed to fix from my heat race that the first five minutes I didn't really breathe," Forkner explained. "I got a bit winded after about halfway, but I was able to bounce back and create enough of a gap to pull off another win though. We‰Ûªre two rounds in and I‰Ûªm stoked on how well our program is doing. Back-to-back wins is exactly how you would want to kick off the season, and you can bet that we‰Ûªll roll into Detroit ready to go and to defend this red plate.‰Û 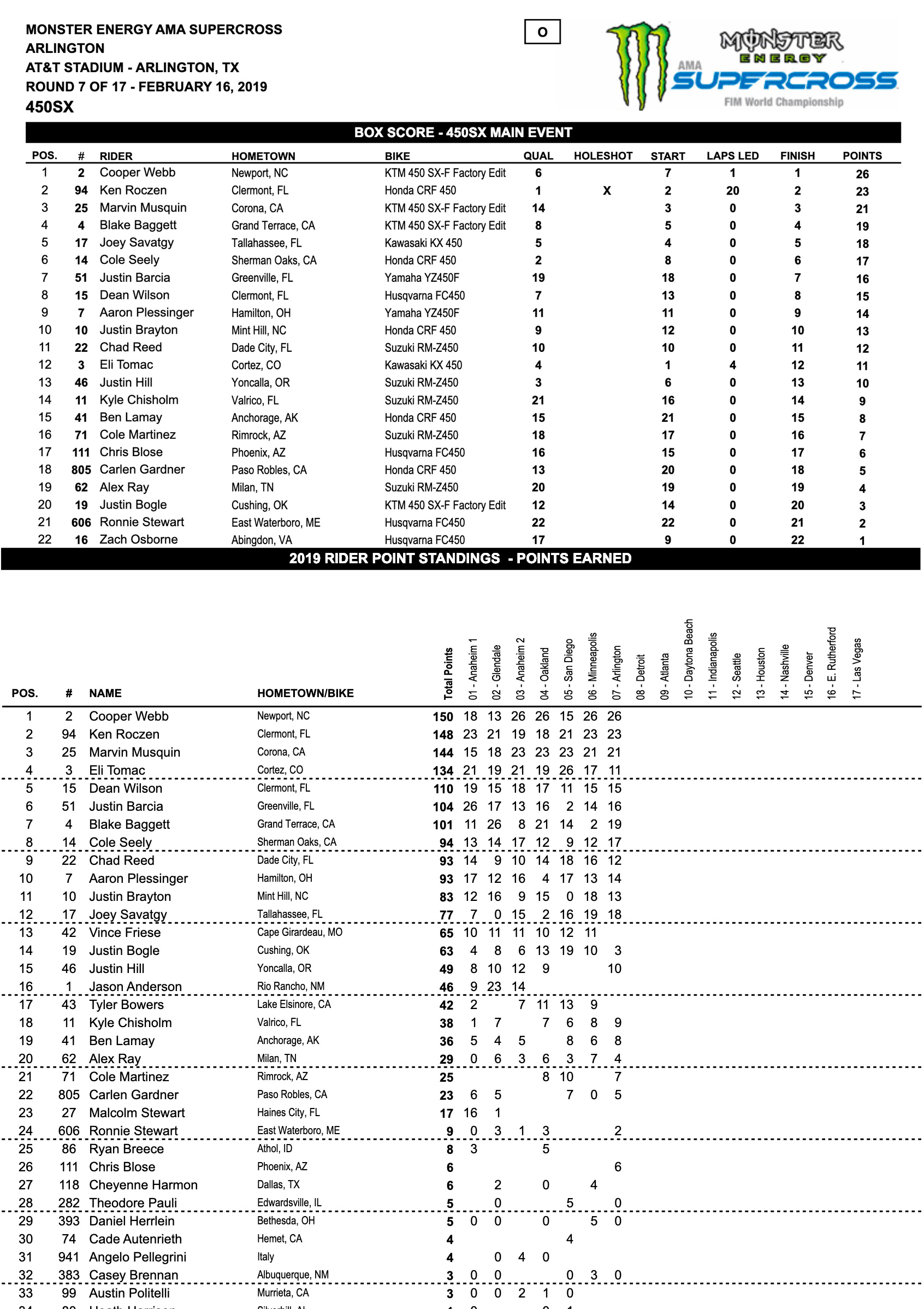 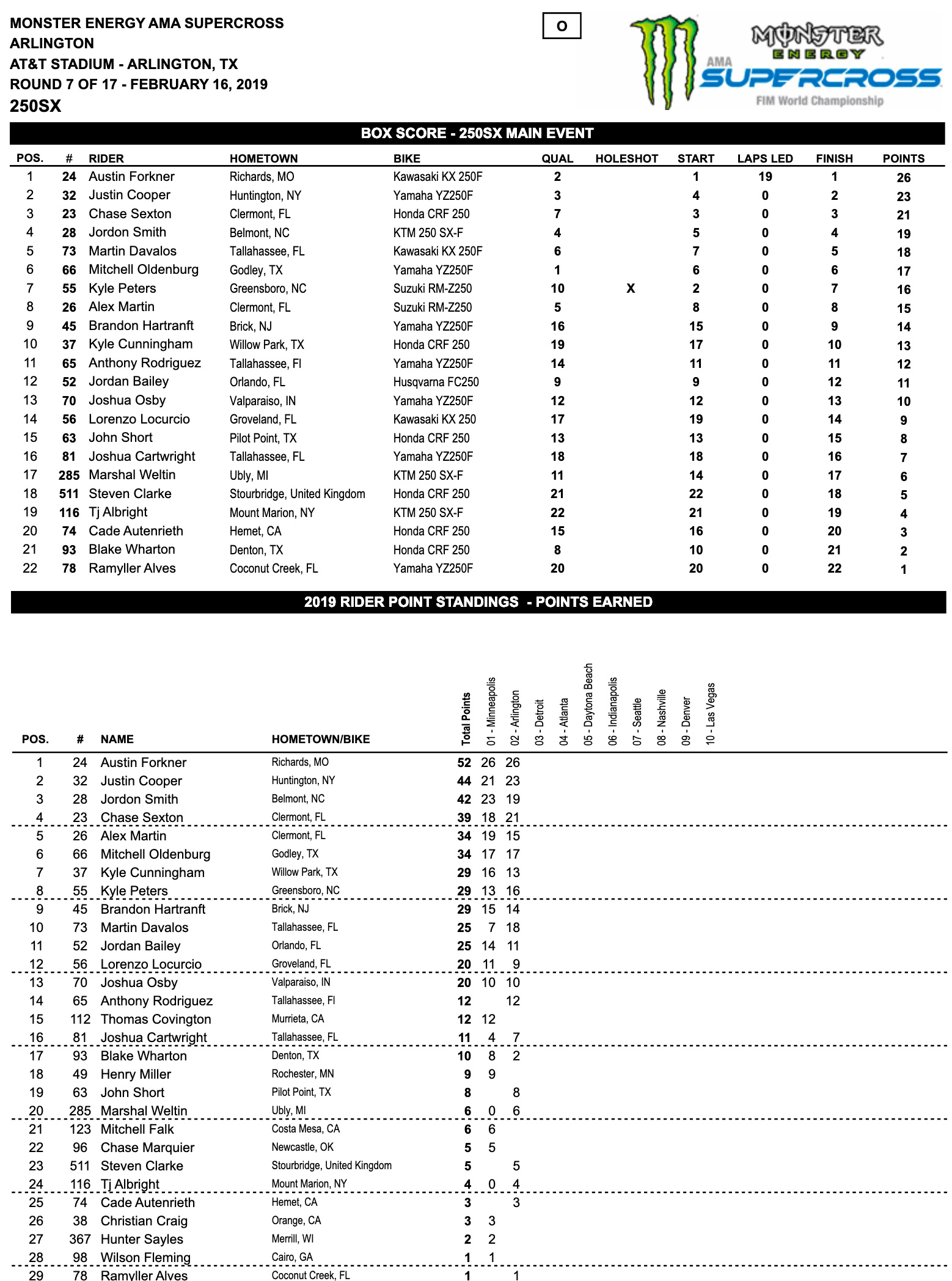