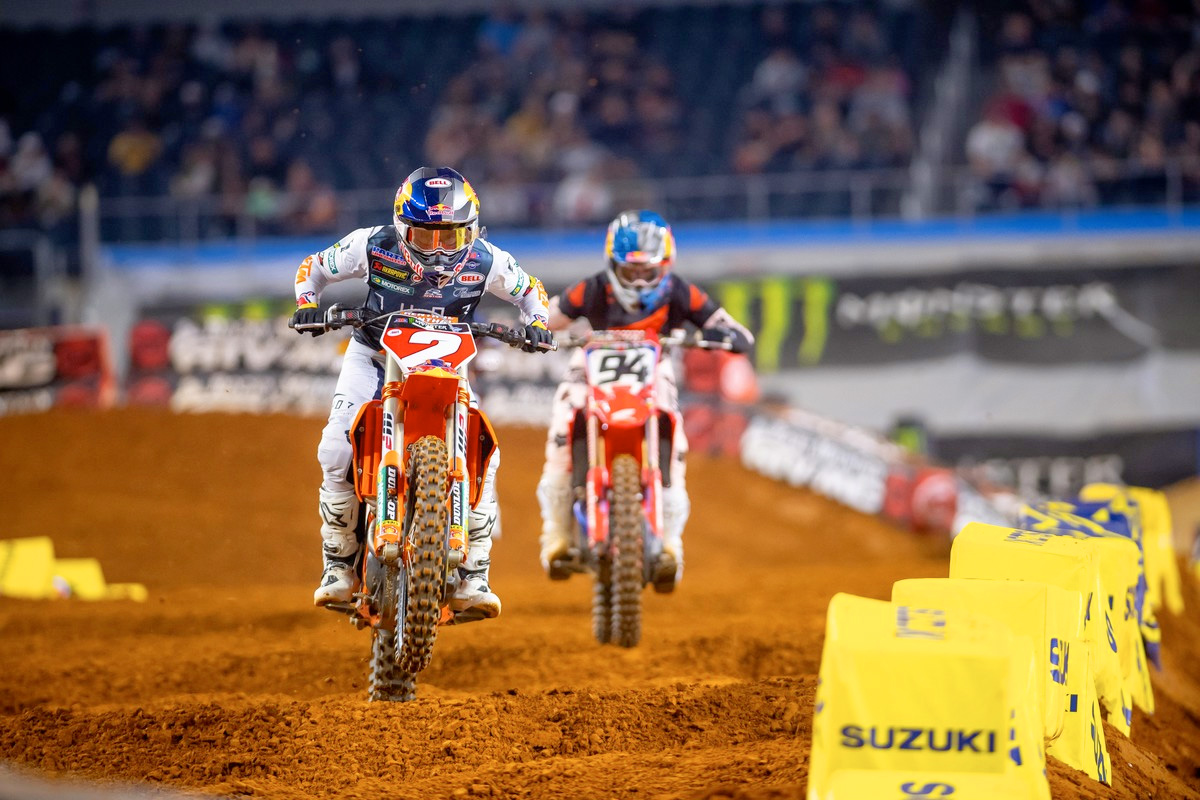 Cooper Webb fought early to hold second then pushed his way into the lead late in the race for a thriller of a win. The current points leader swept all three 2021 Arlington Supercross events. Photo Credit: Align Media
The final Texas race and Round 12 of the 2021 Monster Energy AMA Supercross was once again Cooper Webb's night making it three in a row while Justin Cooper rebounded to win the 250SX West Class.

Webb took a well-earned and dramatic 450SX class win in front of the enthusiastic limited capacity, pod-seated crowd inside AT&T Stadium. Ken Roczen led most of the event and held on for a close second place finish, and Eli Tomac was a threat until the end but finished the night in third. In Round Five of the Western Regional 250SX Class, Round-One winner Justin Cooper grabbed his second win of the season and recaptured the championship points lead.


When the riders cleared the first corner in the 450SX class Ken Roczen jumped into the lead with Webb on his rear tire, Justin Barcia close and Tomac right behind ‰ÛÒ all four 2021 race winners were up front with only each other and a very technical Texas track to deal with. Roczen looked composed and smooth as he kept a small lead over Webb, who had Barcia close behind for the first three minutes of the 20-minute plus one lap race. Just over three minutes in, Tomac got around Barcia and chased after the front two riders, but Barcia did not let the group break away from him.

The gap between the top four racers grew and shrank but rarely got to more than a second between any of them; on the longest rhythm lane the lead four were on the same straightaway even at the race's midpoint. Tomac looked bound to pass Webb five minutes in, but the KTM rider hung tough and held off the Kawasaki rider's charge. With just over five minutes left on the race clock Tomac ran into a Tuff Block, allowing Barcia to get past. The two traded positioning several times until Tomac finally re-establishing himself in third.

Less than a minute after the scrap behind them for third, Webb made his move for the lead. Roczen fought back, and the riders went side by side through several sections before Webb finally made the pass stick exiting the whoops. Roczen mounted a late charge and closed on Webb, but it was not enough to prevent the red plate holder from sweeping the three Arlington races, giving Webb five wins in the past six races and a 15-point lead in the title chase.

‰ÛÏI was just focusing on being consistent," Webb said. "I rode terrible in that heat race and didn‰Ûªt like being put on the ground ‰ÛÒ that fired me up and got me going for the Main Event. To ride with Kenny that whole race and make a late charge was awesome, I felt really good out there. It‰Ûªs incredible to get three here in Dallas, it‰Ûªs unheard of for me. I‰Ûªm pumped!‰Û 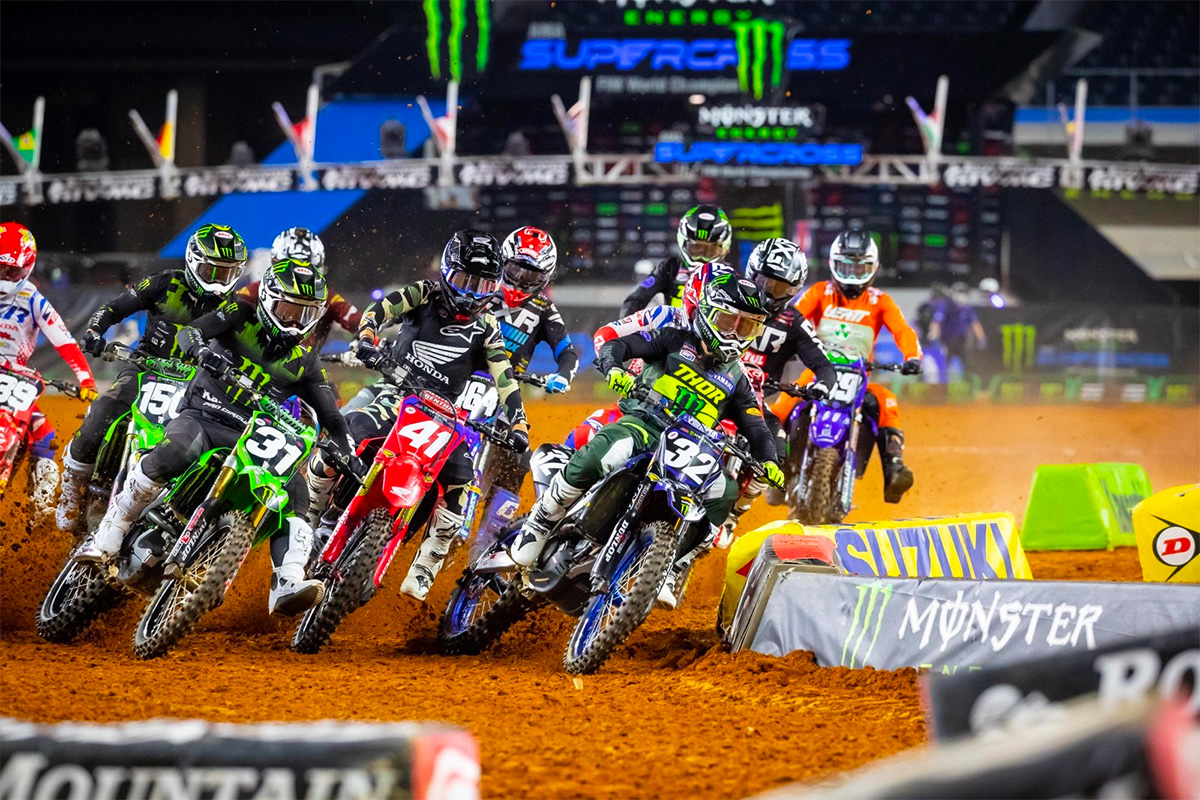 Justin Cooper (39) got the holeshot and was unchallenged at the final Arlington Supercross. He heads to Atlanta with a two-point lead. Photo Credit: Feld Entertainment, Inc.
In the Western Regional 250SX Class, Justin Cooper broke his three-race podium-less streak with a confidence-inspiring win from the holeshot stripe to the checkered flag. Second place went to Cameron McAdoo who crossed the holeshot stripe in about fifth position but was into second place two corners later. McAdoo remained close for the first ten minutes of the fifteen-minute plus one lap race but slowly lost touch as Cooper pulled a comfortable gap over the final laps.


Previous round winner and holder of the red plate going into the event, Australian Hunter Lawrence hung strong in third for most of the race, but with just a couple minutes on the race clock overjumped a triple and the mistake sent him off a 180-degree berm. He remounted in fifth and held the position until the finish. Grabbing third place was rookie Seth Hammaker who fought up to fourth then benefitted from Lawrence's late-race mistake. Fourth place on the night went to Jalek Swoll with a steady ride after earning his first podium at the previous round.