Cooper Webb Makes It Three Wins For the Season at Minneapolis 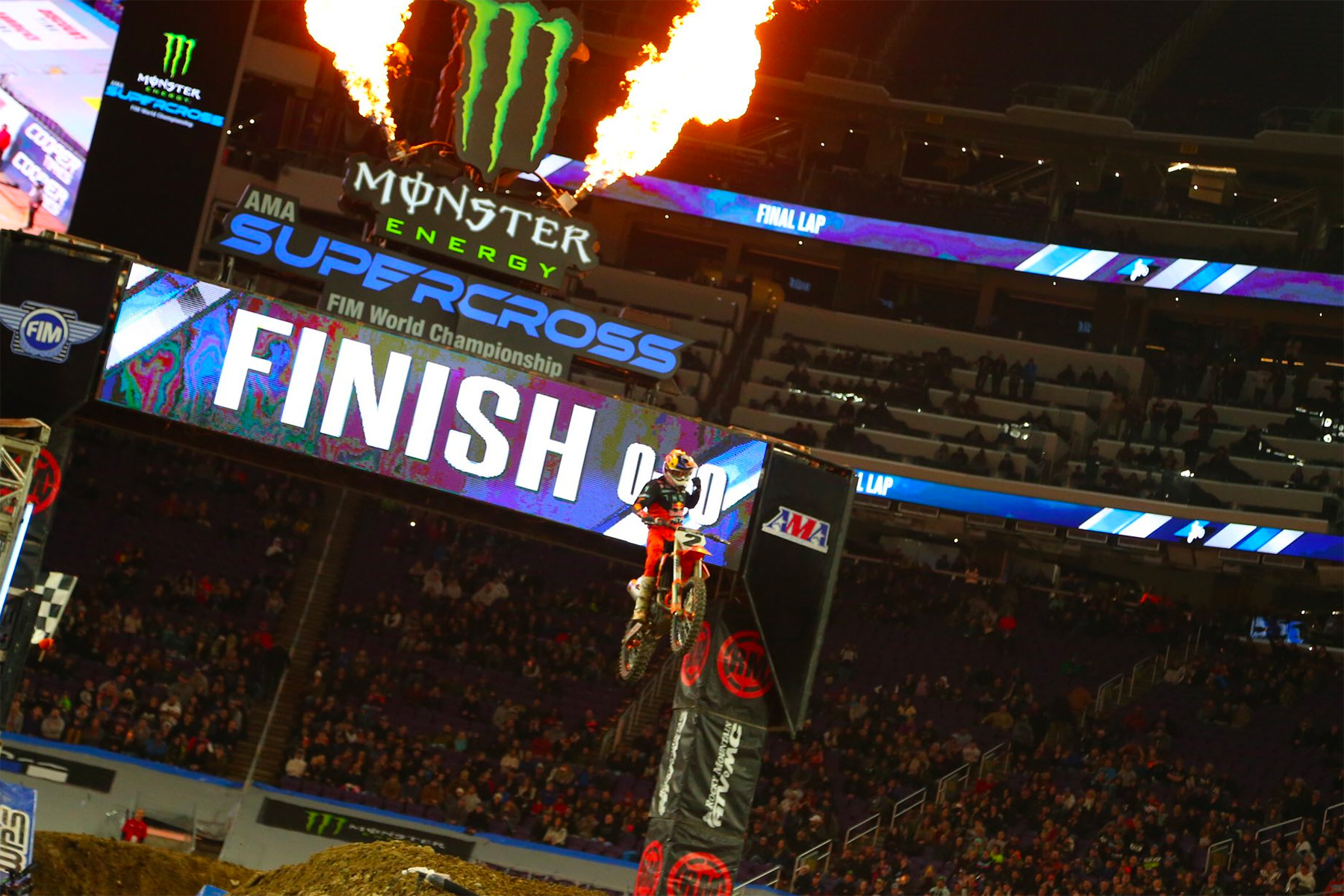 Cooper Webb made it three wins for the season in the 450SX class. Photo: Feld
It was a much drier affair at the indoor U.S Bank Stadium, Minneapolis, for round six of the Monster Energy AMA Supercross Championship with Cooper Webb taking his third the 450SX class win while Austin Forkner took out the opening round of the 250SX East Coast season.

With temperatures below zero outside in Minneapolis inside it was a much different story to last weeks mud-soaked San Deigo round. With U.S Bank Stadium having a roof riders where this week treated to dry conditions, although the track did dry out a lot through the night causing more than a few troubles for some of the top riders.


Heat one of the 450SX class started with all the heavy hitters present and accounted for at the pointy end of the field on lap one. Cooper Webb took the holeshot with Monster Energy Kawasaki's Eli Tomac and HRC Honda's Ken Roczen in close company while Vince Friese, Aaron Plessinger and Chad Reed made up the top six. Red Bull KTM's Webb held off a persistent Tomac after the nine laps for a one second win while Roczen finished two seconds back in third. Fourth through seventh was a tight battle with only five seconds between them. Monster Energy Yamaha Racing's Plessinger held off a hard Charging Dean Wilson for fourth while Reed finished sixth. Friese had a lot of attention but held on for seventh. Kyle Chisholm and Ben Lamay made up the top nine.

Rocky Mountain ATV/MC - KTM's Justin Bogle came out firing with a solid holeshot in heat two, but Justin Brayton was paying him plenty of attention. A missed shift by Bogle allowed the Smartop Bullfrog Spas Honda rider into the lead while Red Bull KTM's Marvin Musquin also made the move past to take second. Monster Energy Yamaha Racing's Justin Barcia, Joey Savatgy and Blake Baggett were all in the hunt with only seven seconds separating the top six. Brayton, who missed last weeks main with an injured thumb, took the win ahead of Barcia after Musquin had a mass of dramas in the final laps to plummet down to eighth! Monster Energy Kawasaki's Savatgy rounded out the top three. The fast staring Bogle held on for fourth with Baggett fifth and HRC Honda's Cole Seely sixth.

When the gate dropped on the 450SX Main, it was fastest qualifier Joey Savatgy that nailed the holeshot with Webb and Roczen in tow. It was a shocker for points leader Eli Tomac who rounded the first lap in sixteenth after a shocking start. Baggett and heat two winner Brayton rounded out the top five, which remained that way for the first seven laps. Musquin, Barcia, Wilson, Bogle and Reed all ran inside the top ten.

At the midway point, things were tight with the top five all within four seconds. Webb was putting loads of pressure on Savatgy, but the Rookie stayed strong and resisted the challenge lap after lap. Roczen had dropped Bagget and settled into third. Red Plate holder Tomac had made his way back into the top ten and battled with Barcia and Reed.

With five minutes to go, Webb finally got the move done on Savatgy and took over the lead. Savatgy then had to fend off a hard-charging Roczen while Baggett and Musquin waited in the wings. Webb had taken control of the race out front with two minutes to go as Roczen made the move on Savatgy. Musquin was quick to drop the Rookie another spot while Baggett went face first into a jump and out of the race. This allowed Brayton into fifth while Tomac got the best of Chad Reed for sixth place.

When the flag dropped, it was Webb for his third win of the season While Roczen's second place gave him back the championship lead, Musquin rounded out the podium.

"To get three wins this year is pretty spectacular, especially bouncing back from last week ‰ÛÒ having that bad race in the mud ‰ÛÒ but I never lost belief, never lost faith and knew I was still good," Webb said. "felt good all day today and to be able to apply it in the heat race, win that, and then win the main was pretty special. It‰Ûªs cool, I have to pinch myself because I‰Ûªve come such a long way in a short amount of time. It‰Ûªs crazy what a year or half a year will do to you. The last two years this place ended my season, so it‰Ûªs pretty cool to bounce back from that and never give up, never doubt myself, make a change and stick to it. I want to keep doing well and doing what I‰Ûªm doing. I definitely feel like I have a lot to improve on and a lot to learn but we‰Ûªll see if we can keep going.‰Û 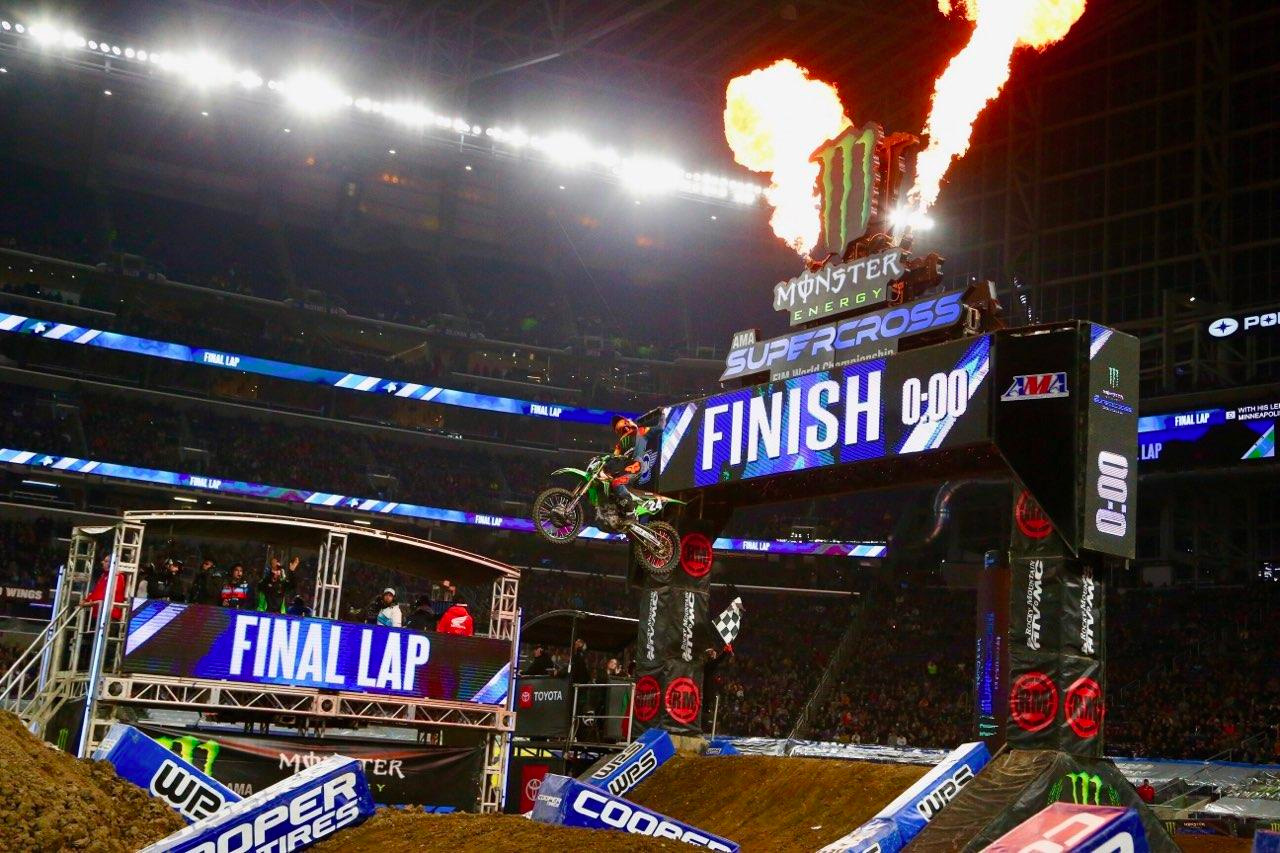 
Joshua Osby took out a hectic - and probably most exciting race of the night - LCQ ahead of Lorenzo Locurcio, Chase Marquier and Wilson Fleming who all made it to the main.

The fifteen minute 250SX main was all about Forkner, the hot favourite claiming the holeshot and setting sail from the opening lap. Behind Forkner, there was plenty of action for the minor placings. Davalos, Alex Martin, Sexton and Smith were the main protagonists with some tight racing for the top five positions. Davlos, Sexton and Martin all spent time on the ground which helped Justin Cooper move into the top four.

With four minutes to go things had settled with Forkner in total control, eleven seconds ahead of Smith and fourteen ahead of Alex Martin. With the laps winding down the field became strung out with very few battles for position. In the end, it was all about Forkner who never put a foot wrong all night. Smith held onto second while Cooper found his way to third.

"It's been a heck of a weekend," Forkner said. "Practice didn't go great, so my trainer had to mellow me out as I was overriding the track. I have been a super good at the test track. With a track like tonight, you just have to be smooth and click off the laps, and that's what I did."

Next Saturday Monster Energy Supercross carries the battles into AT&T Stadium in Arlington, Texas for round seven of the 450SX series and round two for the 250SX East Coast riders. 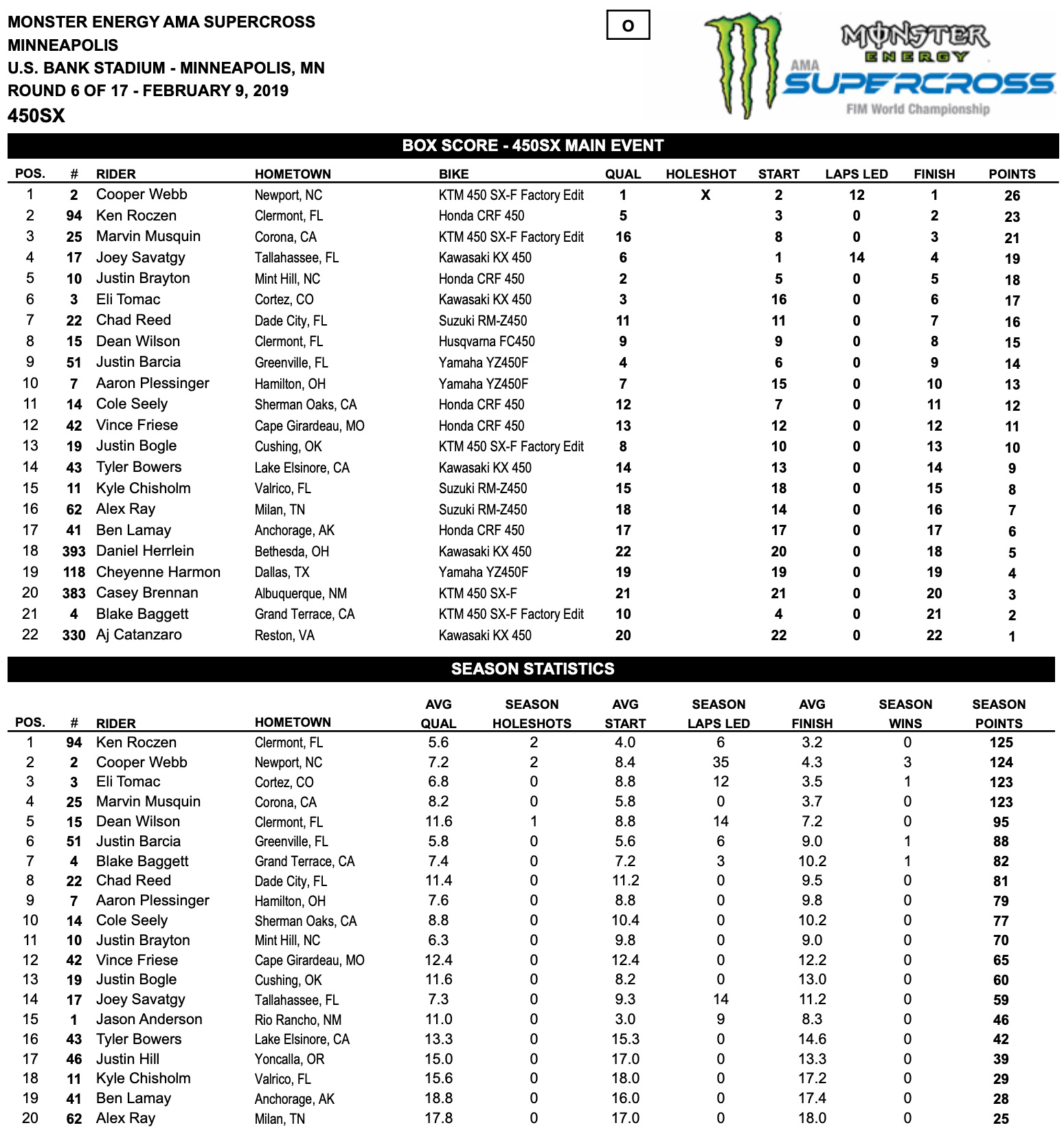 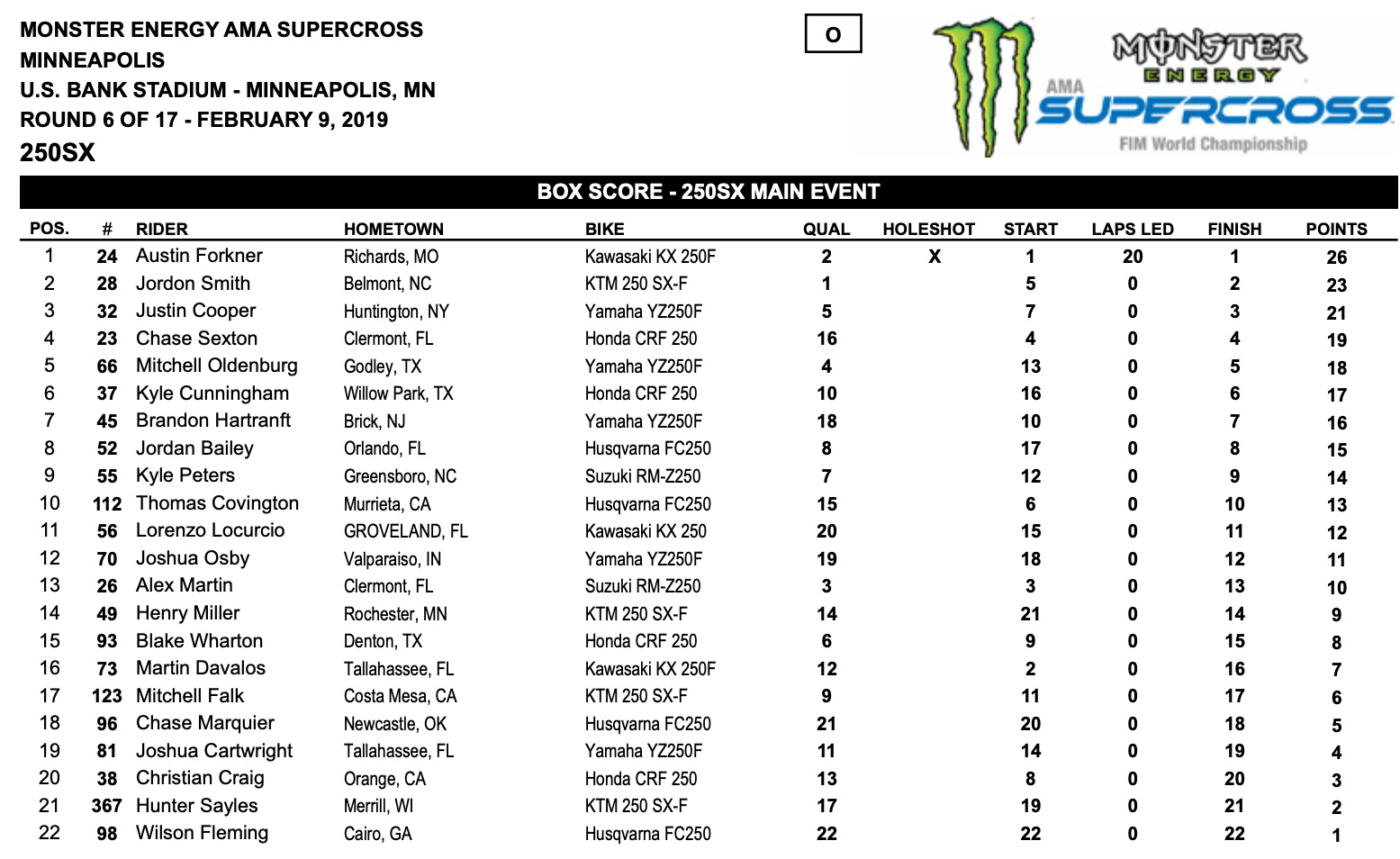