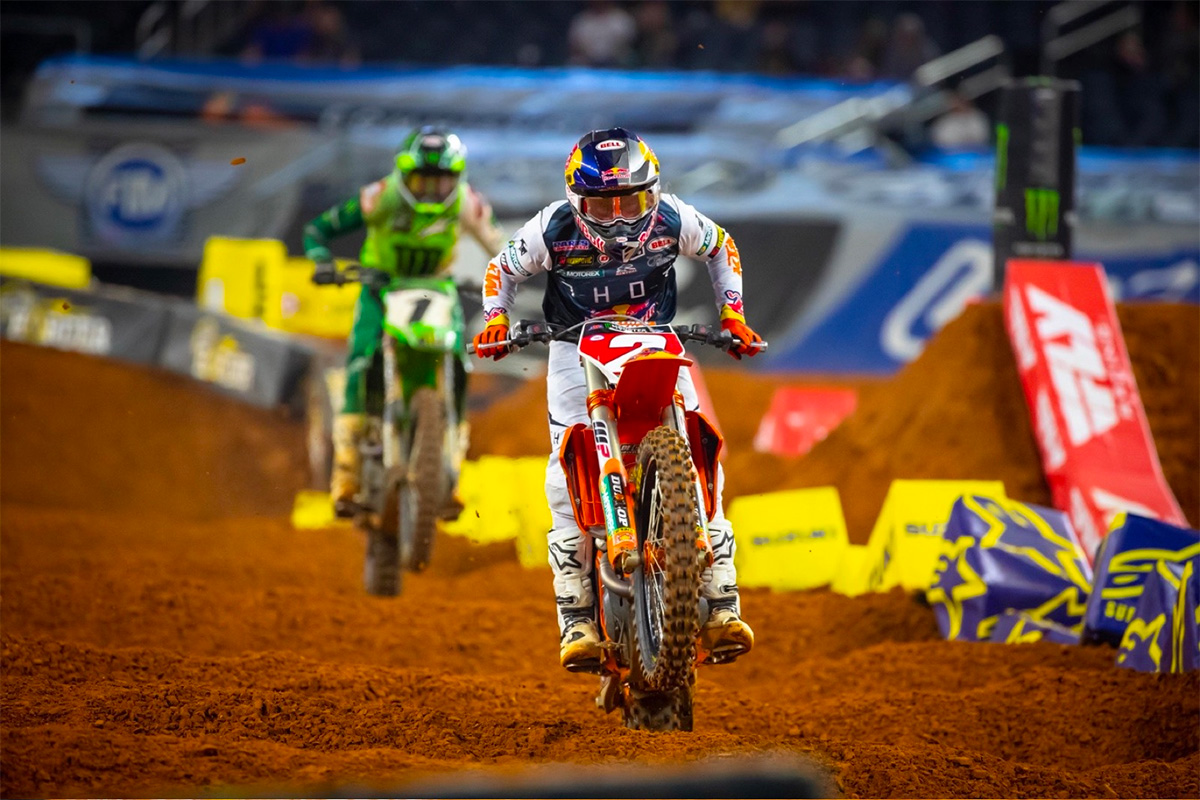 Cooper Webb has been brilliant in the Lone Star State, grabbing his second Arlington win after a victory in Houston earlier in the season. Photo Credit: Feld Entertainment, Inc.
Round 11 of the 2021 Monster Energy AMA Supercross thundered through its second of three race at Arlington, Texas where Cooper Webb took the 450SX win again and Hunter Lawrence took the 250SX class win.

Eli Tomac earned second place points and Ken Roczen rounded out the podium in third. The Western Regional 250SX Class served up its fourth different winner with Lawrence taking his first Supercross win in only his sixth start.


When Webb grabbed the holeshot in the 450SX Class Main Event with Tomac and Roczen directly behind, the race that fans have been waiting for all season had arrived. The three front runners in the championship chase, each with at least two wins on the season already, had an open track ahead and 20 minutes plus one lap to throw down and see who has the best speed just past the midway point of the season. Tomac stayed close, pulling right up behind Webb through the whoops five minutes into the race, but Webb held strong and seemed unfazed by the pressure.

For the rest of the race Webb held roughly one second over Tomac even as they lapped other riders while Rozcen slowly lost touch with the front two. With five minutes left on the race clock Tomac got close again but spun out in the corner before the whoops and could not make up the two second deficit the mistake cost.

Webb stretched his lead to over five seconds by the race's end. One rider on the move throughout the race, Justin Barcia rounded the first lap in the back of the pack and fought his way steadily forward, earning a fourth-place finish by the checkers, with Chase Sexton grabbing a fifth place finish.

‰ÛÏThat was a huge confidence booster for me, to lead the whole race again with that amount of pressure," Webb said. "Eli was probably the faster guy tonight but I just tried to hit my marks and not make any mistakes. After that [practice] crash today, sometimes it‰Ûªs good for you to get those big hits, get that fear back in you and ride the thing that kicked you off. I‰Ûªm super pumped on that Main Event, to battle with those guys and be able to lead wire to wire, it‰Ûªs awesome.‰Û 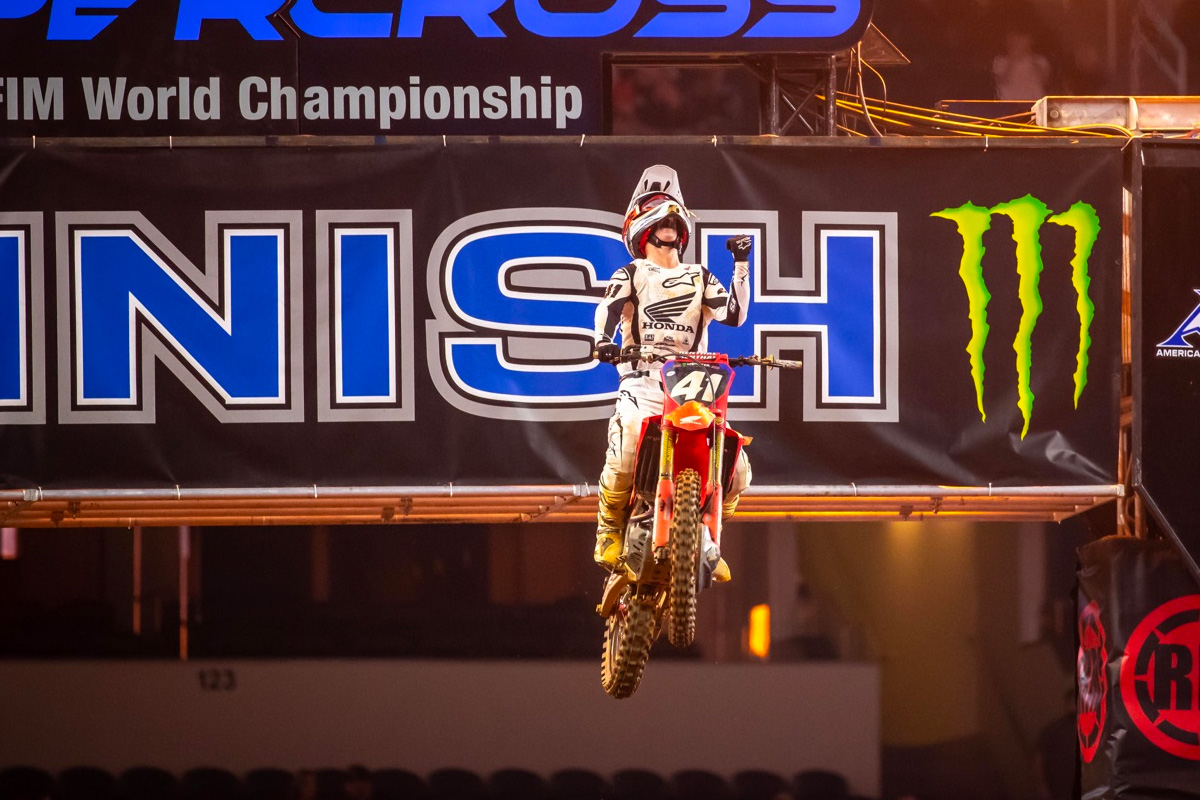 Hunter Lawrence had the 250SX Class covered and a made his career-first Supercross win look almost easy. Photo Credit: Feld Entertainment, Inc.
Muc-Off Honda's Mitchell Harrison grabbed the early lead in the Western Regional 250SX Class Main Event with Jalek Swoll right on his rear wheel. Justin Cooper, the fastest racer in all of the division's qualifying this season, sat in sixth but contact with another rider on the opening lap put him back to nineteenth place. The previous round's winner, Seth Hammaker, was running just inside the top ten and not in a position to repeat his win.


Just over five minutes into the fifteen-minute plus one lap race Lawrence made a bold move, passing two riders in one bowl turn to jump from third place and into the lead. From there he rode like a seasoned veteran, stretching his lead to five seconds near the end of the race.

Shortly after Lawrence took command upfront, points leader Cameron McAdoo crashed in the whoops and dropped back, meeting up with Cooper who was up to eleventh at that point. By the checkers, Lawrence had the win, Swoll sat solidly in second, recently crowned Kicker Arenacross champ Kyle Peters grabbed third, and Garrett Marchbanks took fourth with Justin Cooper rounding out the top five.

With one more round in Arlington, this Saturday, the series then heads into a short break before an Atlanta triple-header and then the two-race season finale in Salt Lake City, Utah.