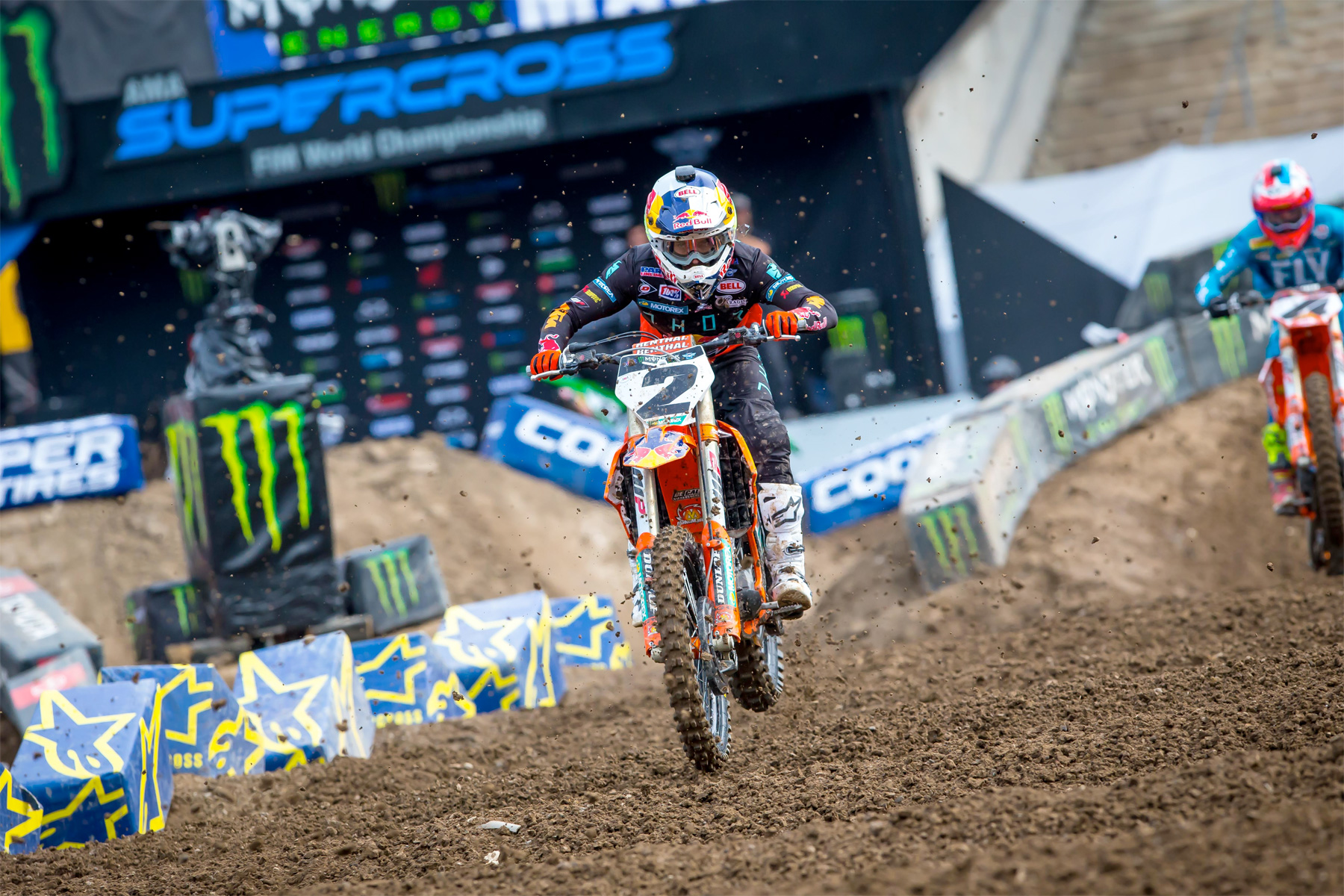 Two straight wins and the points lead for Cooper Webb, not a bad day at the office
Red Bull KTM‰Ûªs Cooper Webb has won the fourth round of the 2019 Monster Energy AMA Supercross Championship held in Oakland with a wire to wire Victory.

After nailing the holeshot at the start of the main event, Webb along with his Red Bull team-mate Marvin Musquin quickly asserted themselves at the front of the pack, while a third orange machine of Rocky Mountain ATV‰Ûªs Justin Bogle rounded out the top three.

Heat race two winner, Kawasaki‰Ûªs Joey Savatgy along with Factory Honda‰Ûªs Ken Roczen both worked hard to make their way around Bogle, while Webb and Musquin built a comfortable lead over the chasing pack.

The race was soon turned on its head, however, with Musquin suffering a small tip over, allowing both Savatgy and Roczen to move into second and third while Heat one race winner, Eli Tomac also got into the mix.

Musquin was able to rebound from his crash and moved his way back into second, as Savatgy who was looking comfortable in third succumbed to a bike issue that put an end to his race.

A fast charging, Blake Baggett found his grove working his way from well outside the top ten early in the race, eventually passing both Tomac and Roczen to put himself into third position as the race wound down, while Tomac also took advantage of Roczen‰Ûªs drop in pace to move into fourth.

With just a handful of laps to go, Musquin moved back on to the rear wheel of his team-mate and looked as though he would take a shot of becoming the fourth rider in as many rounds to claim victory; however it was not to be with Webb holding on to a narrow victory ahead of Musquin with Baggett in third position.

Tomac crossed the line in fourth with Roczen in 5th.

‰ÛÏOakland was a great day for me. It was a perfect race ‰ÛÒ I was able to lead from start to finish. I had some pressure from Marvin at the end but I held on and was able to get a win, so I‰Ûªm stoked," Webb enthused.

"Two-in-a-row and the first time I‰Ûªve had the red plate in my career is pretty amazing, so hopefully we can keep it going," Webb continued. "We‰Ûªve got a long season ahead but it‰Ûªs been a great two weekends so we‰Ûªll get back to work on Monday. Thank you to the Red Bull KTM Team for believing in me and getting me back here. It was awesome to see KTM dominate tonight with 1-2-3 finishes and 1-2 for me and Marv the last two weekends.‰Û 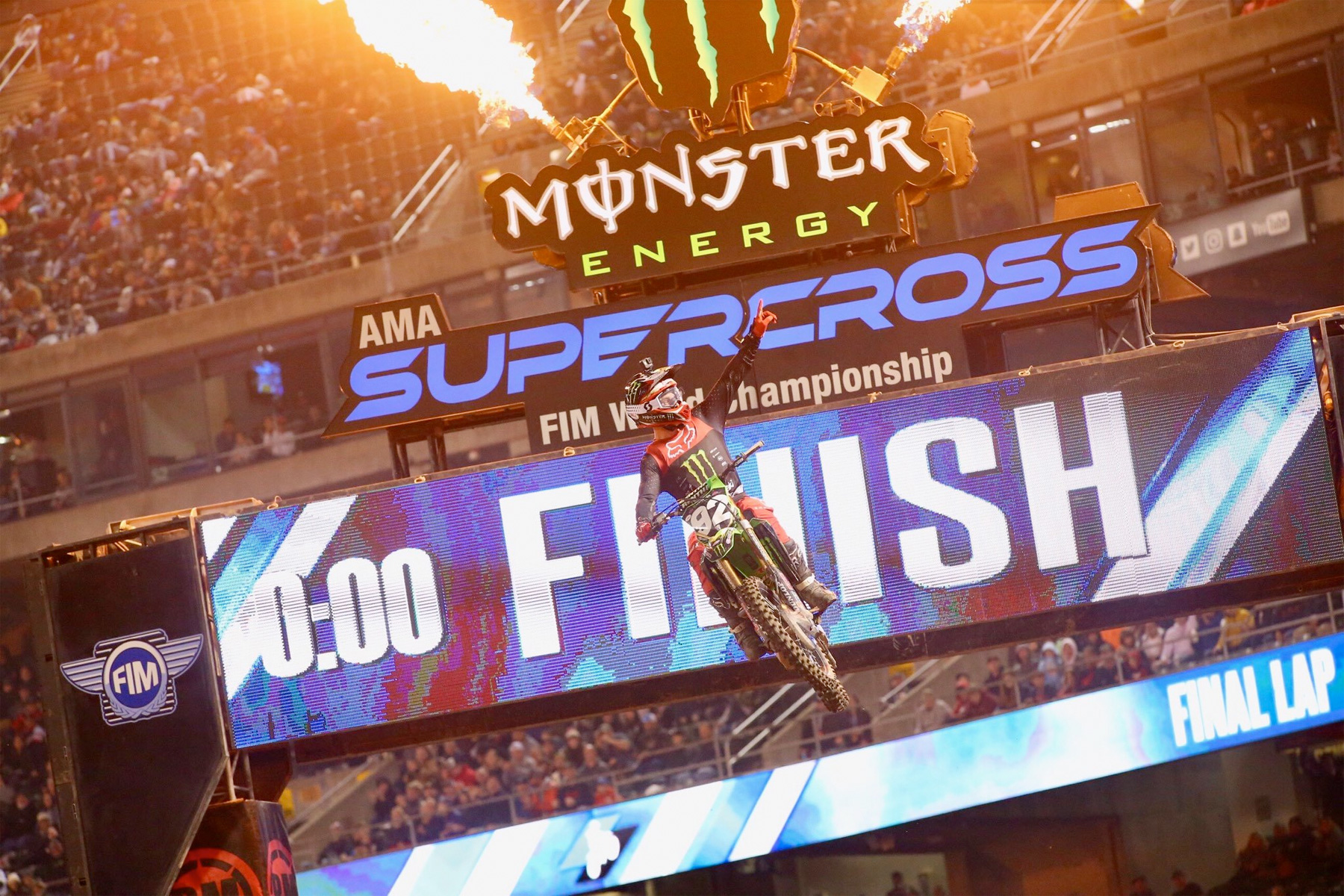 Adam Cianciarulo wraped up his second race win for 2019 in Oakland
In the 250 West Class Pro Circuit Kawasaki‰Ûªs Adam Cianciarulo became the first repeat winner of the year after he claimed a start to finish win.

Coming under intense pressure early in the race from points leader Colt Nichols, Cianciarulo made a handful of mistakes, however unlike races past he was able to compose himself quickly and establish a small lead out front.

Behind him, Dylan Ferrandis was putting in his trademark ride through the field and after rounding up Troy Lee Designs KTM‰Ûªs Shane Mcelrath for third, put a tough move on his Yamaha team-mate to take away second spot.

By the time he moved into second position, Cianciarulo had built a comfortable lead and raced away for his second race win of 2019.

‰ÛÏThe track was so demanding and kept your heart rate up the whole time,‰Û 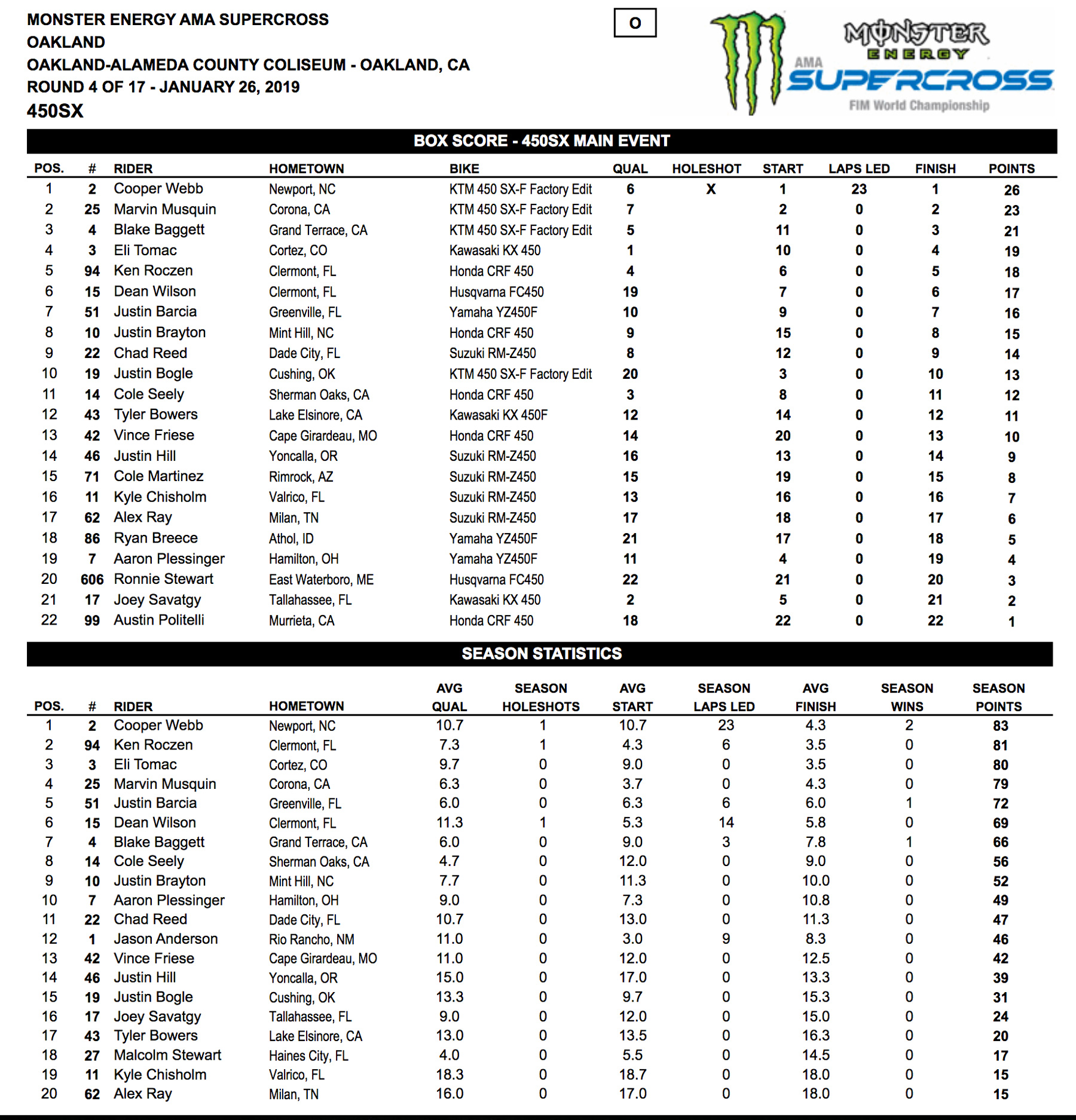 450 West Round Results and Championship Standings 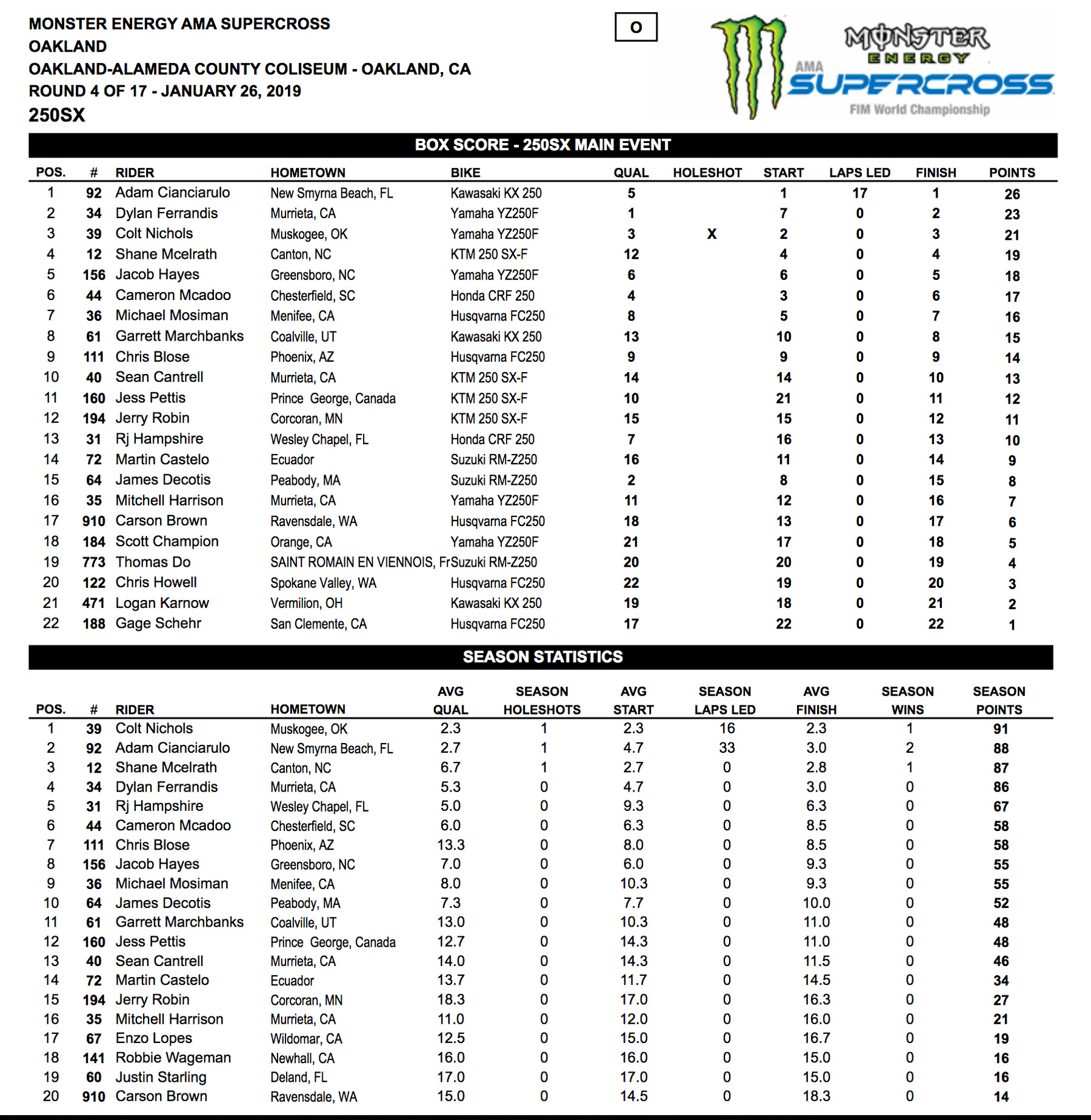 250 West Round Results and Championship Standings