Cooper Webb Closes In On Roczen With Back To Back Wins 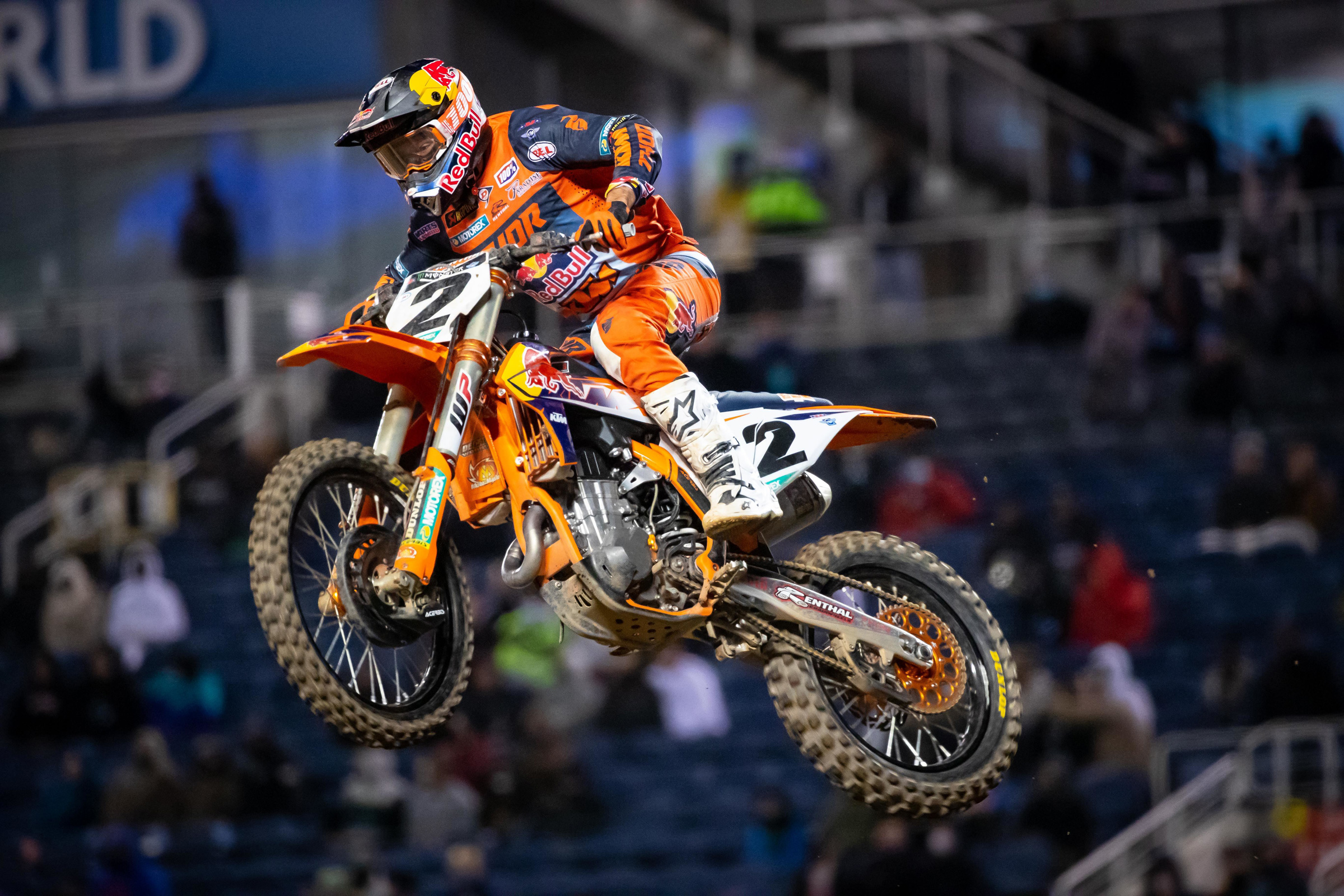 Cooper Webb has moved to just six points behind Roczen in the championship race with his second win in a row.
Round 8 of the Monster Energy AMA Supercross, an FIM World Championship thrilled with the second of two rounds inside Camping World Stadium in Orlando, Florida with Red Bull KTM's Cooper Webb taking the 450SX Class win to the cheers of the in-person pod-style-seated fans.

Webb's charge from eighth at the holeshot stripe to leading the race in less than nine minutes demonstrated the speed and aggression of which he's capable. It was Monster Energy Kawasaki's Adam Cianciarulo who lead the race early before Webb quickly moved his way through the field passing both Troy Lee Designs GAGGAS factory racings Justin Barcia and his own RedBull KTM team-mate Marvin Musquin in order to take the battle to Cianciarulo.

Cianciarulo who had opened up a four-second lead, was no match for his long time rival, with Webb making the move to the lead and establishing a comfortable gap, while things once again took a turn for the worse for the second-place Kawasaki rider, with Cianciarulo crashing heavily in the whoops and putting an end to his night and in the process gifted second place to Musquin.

Behind Musquin a race-long battle developed between Barcia, Monster Energy Kawasaki's Eli Tomac and current points leader Ken Roczen aboard his Factory HRC Honda who made light work of the field after rounding the opening turn way back in 17th position.

Roczen made his way by Tomac on numerous occasions but could not make the move stick, but with just over four minutes remaining, Tomac was momentarily held up by a lapped rider, allowing Roczen to pounce and move into 4th position.

Rockstar Husqvarna's Jason Anderson who earlier in the night won his first heat race for the season like Roczen started the race at the rear of the field, but in some re-found form, Anderson was able to follow Roczen's path through the field and also made a late-race pass on Tomac to move into 5th position.

Out front, Webb cruised to the win ahead of team-mate Musquin, with Barcia holding off Roczen over the final two laps to claim the final spot on the podium. The win also moved Webb to six points behind championship leader Roczen, halving the points gap heading into next weekend's break.

‰ÛÏThis one is huge, back-to-back wins is amazing!" Webb exclaimed. "It was a great race battling with AC [Cianciarulo] and great points for tonight.

"Marvin was riding great. I knew he was coming there at the end and I know how strong he is because we ride and train together every day. I felt like start to finish I was in my comfort zone just clicking laps away and it felt really good. KTM going one and two is incredible, this is an awesome feeling.‰Û 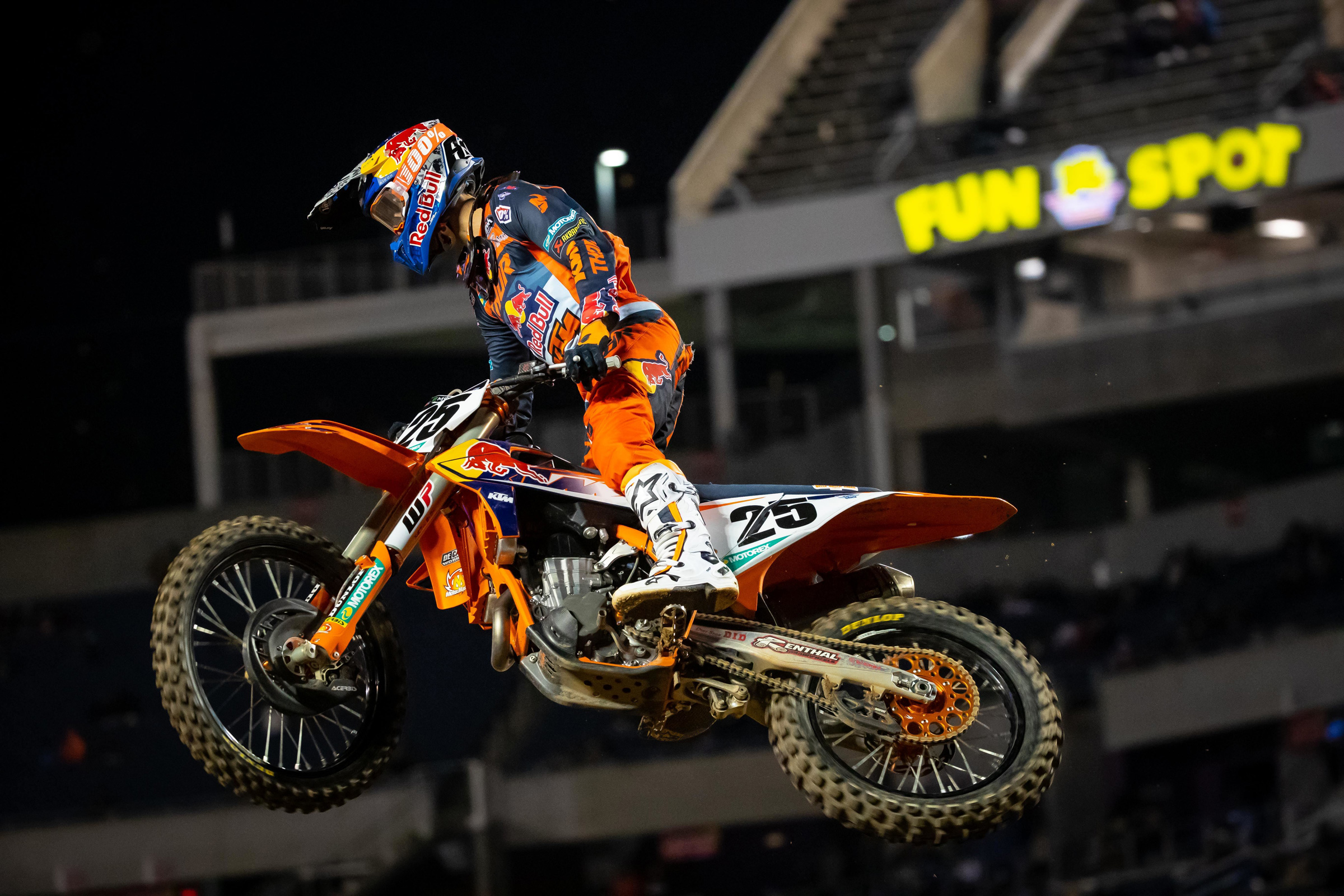 Marvin Musquin bounced back to form, just missing out on a heat race win, and landing on the podium for the first time in 2021
The second place for Musquin marked his first podium appearance for the 2021 season

‰ÛÏIt feels really good to be running up front," Musquin said. "The whoops started to be very tough so I was trying to be careful but at the same time, I wanted to gain time on Cooper.

"I felt like I was a little bit quicker at one point but I didn‰Ûªt want the track to bite me and go down. At least I had a great feeling out there. I want to thank the team for their hard work, I felt better today.‰Û 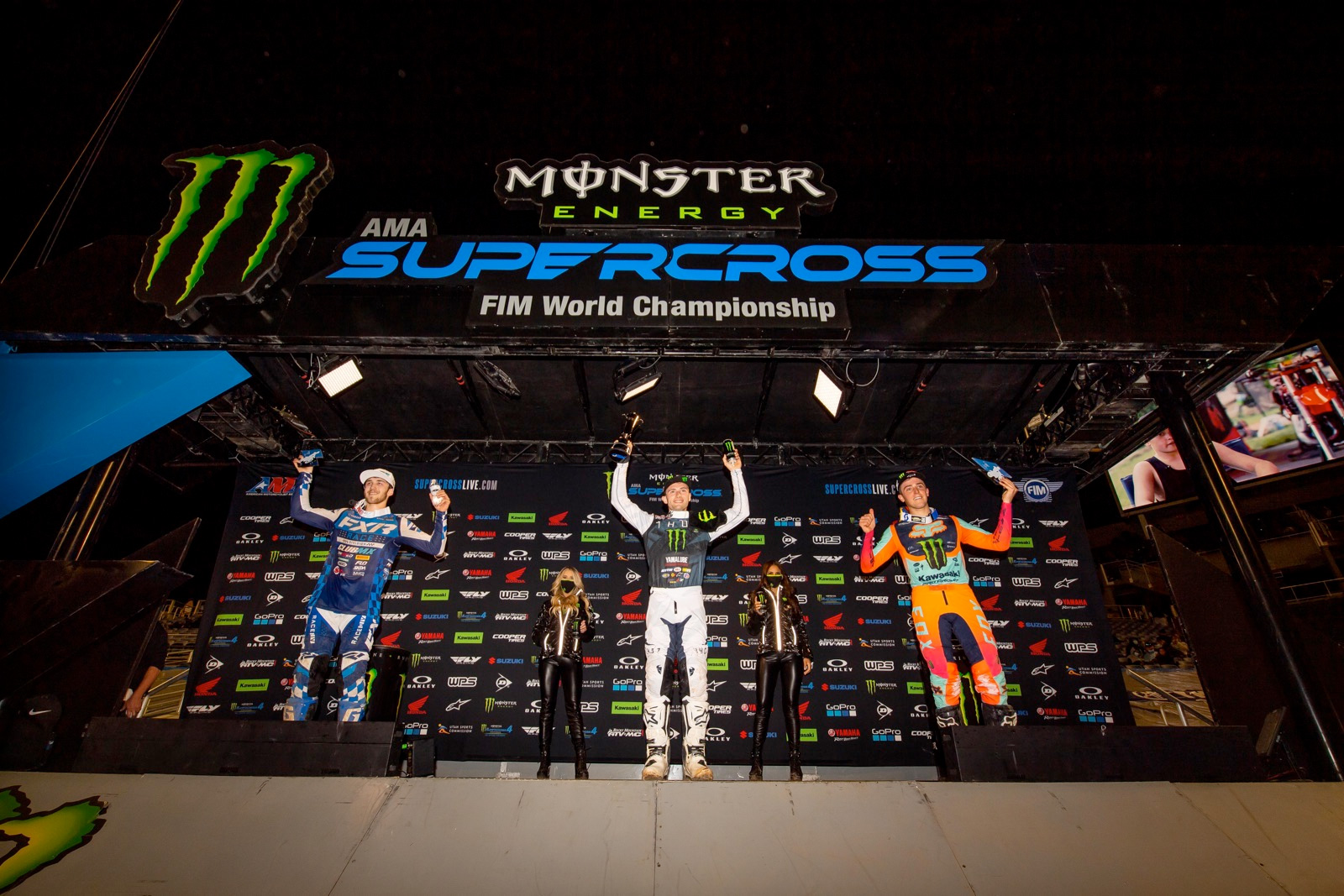 Justin Cooper had a dream ride for a convincing win in an opening round that must have seemed like a nightmare for many other title contenders. Photo Credit: Feld Entertainment, Inc.
250 Class


Justin Cooper had a dream ride for a convincing win in an opening-round that must have seemed like a nightmare for many other title The dry, hardpacked track approximated conditions for the traditional Western Regional 250SX Class opener and Justin Cooper took home the win after the Main Event had to be re-started due to crashes.

Once into the lead Cooper broke clear of the pack and ran what appeared to be an easy win for his fourth career victory and his second consecutive opening-round win.

Monster Energy Pro Circuit Kawasaki's Cameron McAdoo traded a second-place start for a fifth with the restart, but within two minutes of the 15-minute plus two-lap event had gotten himself back into the second-place spot.

Putting in a hard charge after finishing the first lap in eighth place, ClubMX / IAMACOMBACK / Yamaha's Garrett Marchbanks landed the final spot on the podium.

Husqvarna's Jalek Swoll crossed the line to finish in 4th, with Australia's Hunter Lawrence putting in a solid main event, working his way back from a poor start to finish in 5th position. It was a night of what could have been for Lawrence who was sitting in third position in the first start before the red flag came out.

The opening round was a heartbreaker for the Martin brothers Jeremy and Alex. Jeremy crashed just feet past the holeshot stripe on the first lap and older brother Alex crashed hard just two corners after that. Alex was down on the track, necessitating the reg flag re-start. 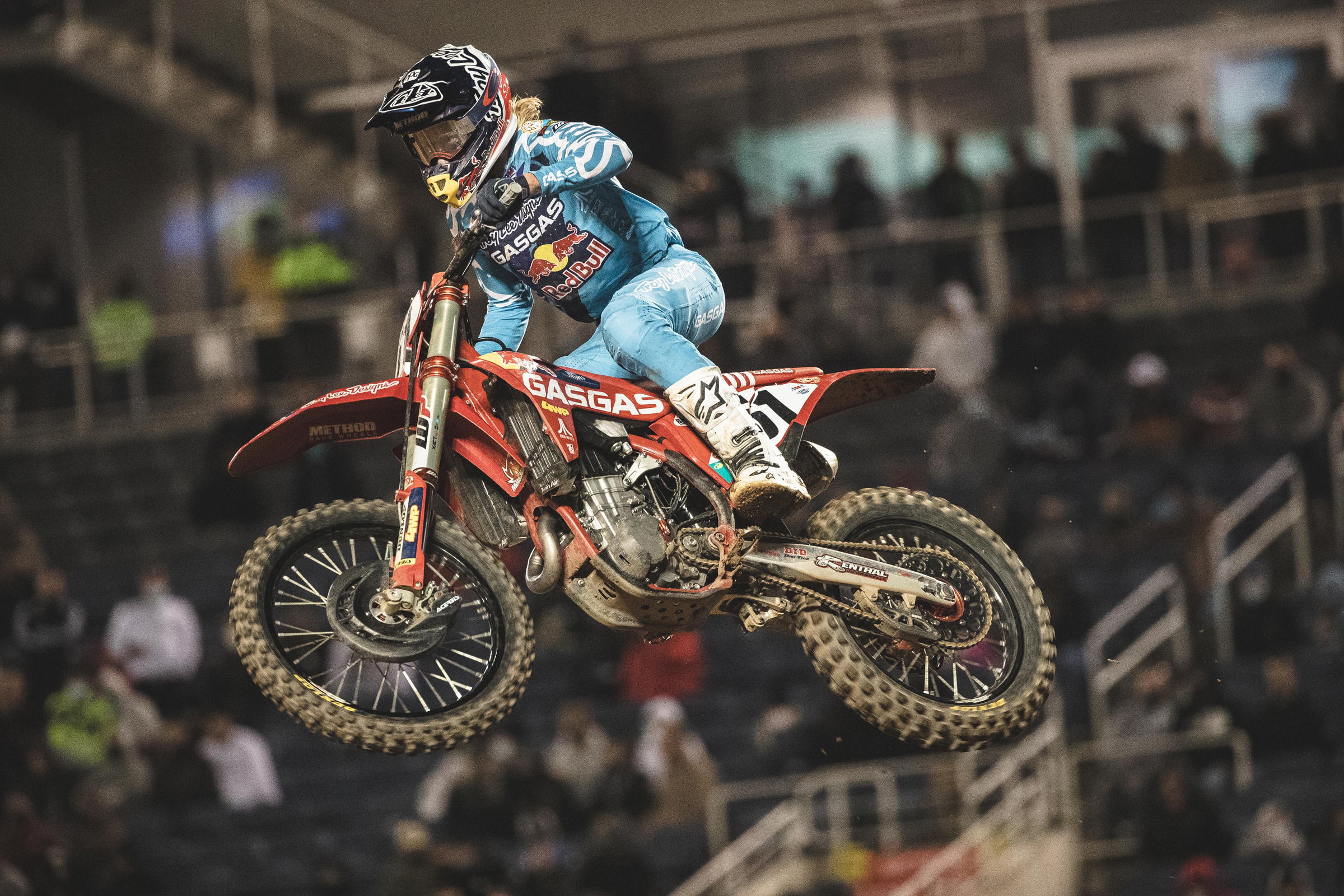