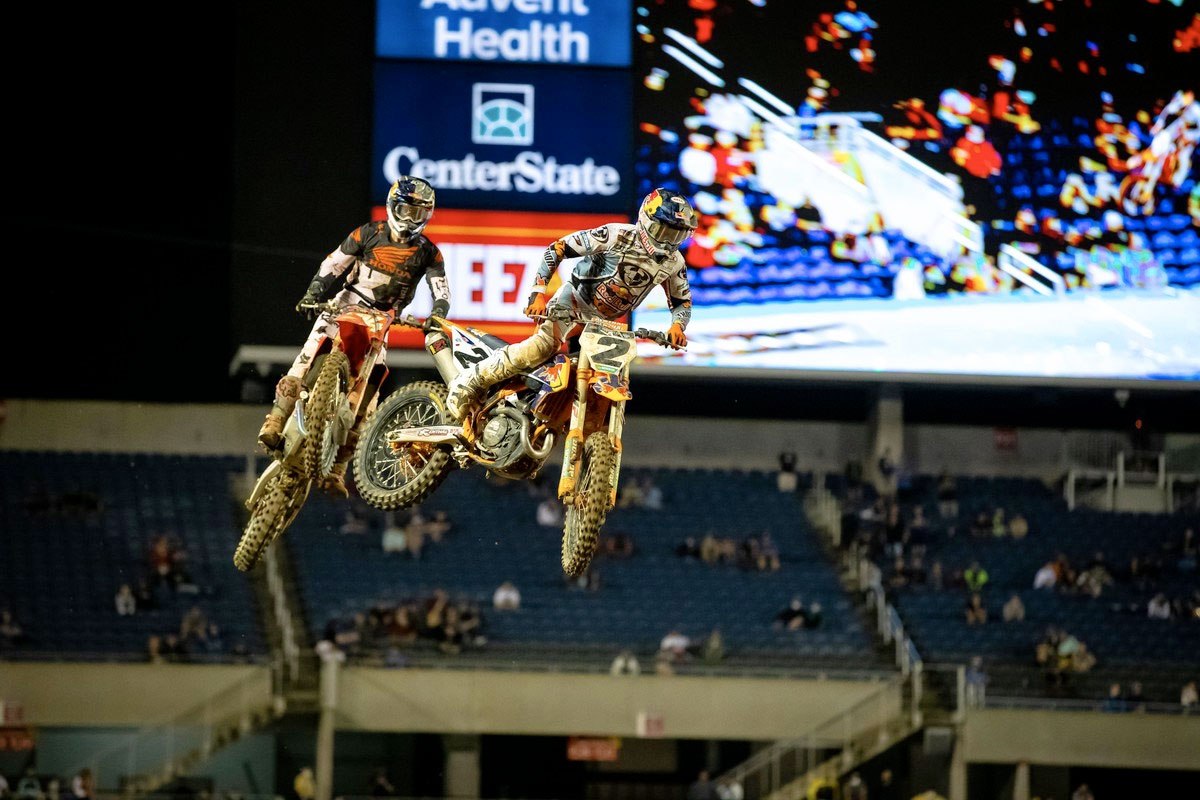 Cooper Webb took the 450 class win to break Ken Roczen's three race win streak, Roczen still maintains a 13 point lead over Webb in the standings. Photo: Align Media
The seventh round of the Monster Energy AMA Supercross held its first open-air race of the season inside Camping World Stadium in Orlando, Florida with Cooper Webb and Australian Jett Lawrence claiming the wins in the 450 and 250 classes respectively.

Zach Osborne grabbed the holeshot and had the speed to keep the pack behind him in the 450SX Class Main Event but a big mistake in the whoops allowed three riders to get by as he recovered. Muc-Off Honda's Justin Brayton took over the point position with Ken Roczen right on his rear tire. Roczen was coming off a three-win streak, but that only motivated Cooper Webb more; the KTM rider sat close in third.


Just over three minutes into the 20-minute plus one lap race, Webb positioned himself to pass both riders in a single corner. Like that, Webb had the lead with Roczen using the moment to get around Brayton even as he lost a spot to Webb.

Opening round winner Justin Barcia was soon past Brayton also, and the three riders rounded the track nearly in formation just slightly out of range for any of them to make a pass attempt. With just over five minutes left on the race clock Barcia had an incredible save in the whoops. He was thrown from his bike but managed to stay in touch long enough to jump back on without hitting the ground.

Osborne took advantage of the mistake to take the third spot ‰ÛÒ in the same section where he'd lost the race lead ‰ÛÒ and held it to the end despite a constant push from Barcia.

2020 defending champion Eli Tomac had a tough night after a mid-pack start and rounding the first lap in 11th place. Tomac charged hard on the retro-track layout that commemorated the last time the series visited the venue and that event's battle between James Stewart and retiring 5-time champion Ricky Carmichael in his final Monster Energy Supercross race.

At the 2021 running of Orlando, Tomac made steady progress forward and reached fifth by the checkered flag behind Webb, Roczen, Osborne and Barcia.

‰ÛÏIt was a great race tonight, we were one and two for pretty much the whole thing, tooth and nail," Webb said. "It was a tough race, the track really broke down a lot, especially from the beginning laps and it‰Ûªs definitely a little different when you are leading the majority of the Main Event. I made a few mistakes those last few and Kenny caught up, but I was able to get it done and man does it feel good.‰Û 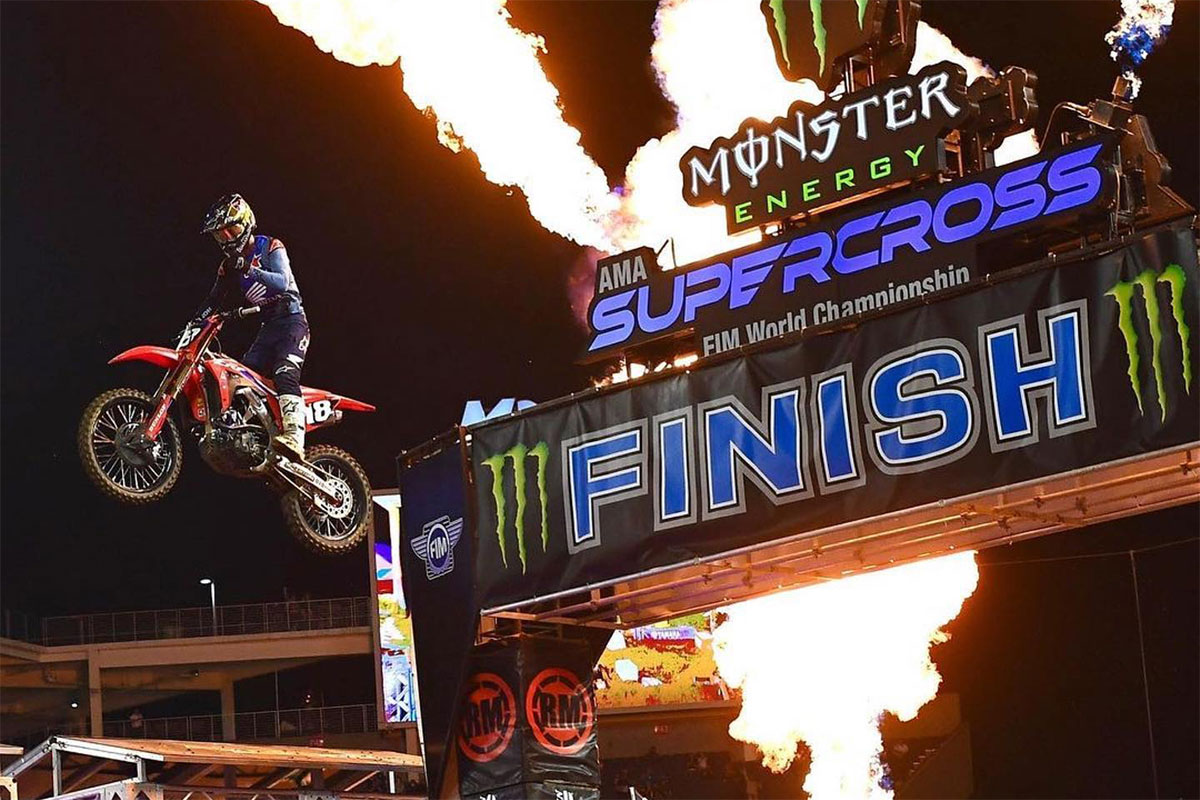 Jett Lawrence took his second win in the 250SX class ahead of championship leader Colt Nichols
In Eastern Regional 250SX Class racing it was Jett Lawrence's night from the drop of the Main Event gate. After scoring the holeshot it was his race to lose with points leader Colt Nichols right behind him. As the two pulled away from third place rider Christian Craig, the gap between the top two riders stretched and closed. Lawrence handily got through lappers, never allowing them to slow him enough for Nichols to get within striking distance.


The big drama of the 250SX class had come earlier in the night. Christian Craig crashed hard in 250SX Class Heat 2 while leading; Craig was pitched and slow to get up, evaluating his right hand. He returned for the Last Chance Qualifier with the injury taped up. He rode conservatively for the LCQ win and a spot on the Main Event gate. Craig gutted it out through the pain in the Main Event for third, losing only two points on his teammate as the regional series goes into a 10-week break before the final two rounds to determine the champion.

The racers line up again inside the same stadium on a completely re-designed track next Saturday for the second of the Orlando double-header; the February 20th Florida race will kick off the 2021 Western Regional 250SX Class series with a new group of hungry racers eager to start their title campaigns with a win. 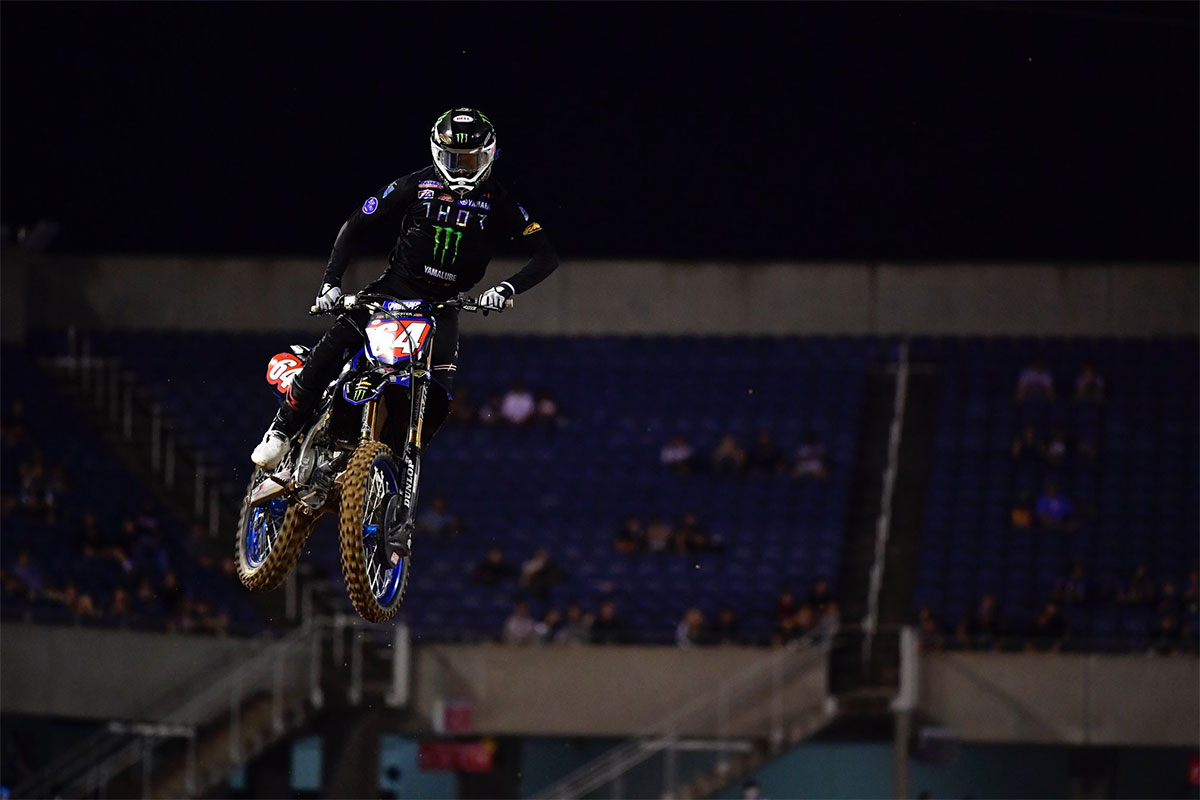