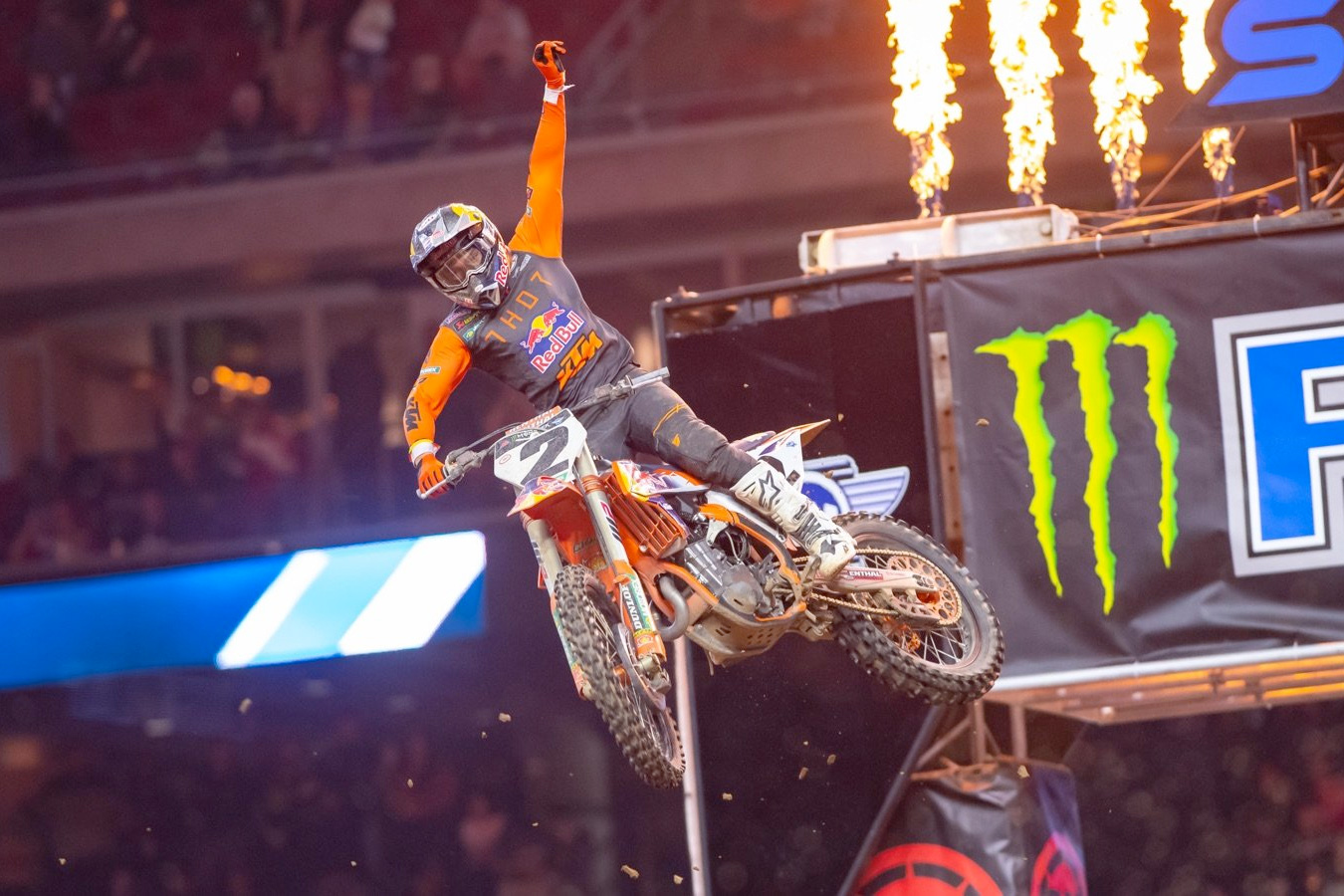 Cooper Webb took his first win of 2021 with a thrilling last lap pass.Photo Credit: Feld Entertainment, Inc.
Round three of the 2021 Monster Energy AMA Supercross Championship, finished its triple-header inside NRG Stadium in Houston, Texas, and delivered the third winner in as many rounds.

Cooper Webb made a last-lap pass to capture the 450SX Class win in front of 9,115 limited-attendance, pod-style seated, enthusiastic fans. Ken Roczen was on Webb's rear tire at the end for second and Adam Cianciarulo brought home his first podium in 2021. The Eastern Regional 250SX Class also delivered its third win in three rounds when Colt Nichols fought past his teammate to grab his first win in two years.


Webb led at the 450SX Class Main Event holeshot line but Ken Roczen hung close then moved past him two minutes into the 20-minute plus one lap race. Adam Cianciarulo settled into third with season-opener winner Justin Barcia close behind. Defending champ Eli Tomac was off to a mid-pack start and moved up through the field steadily. 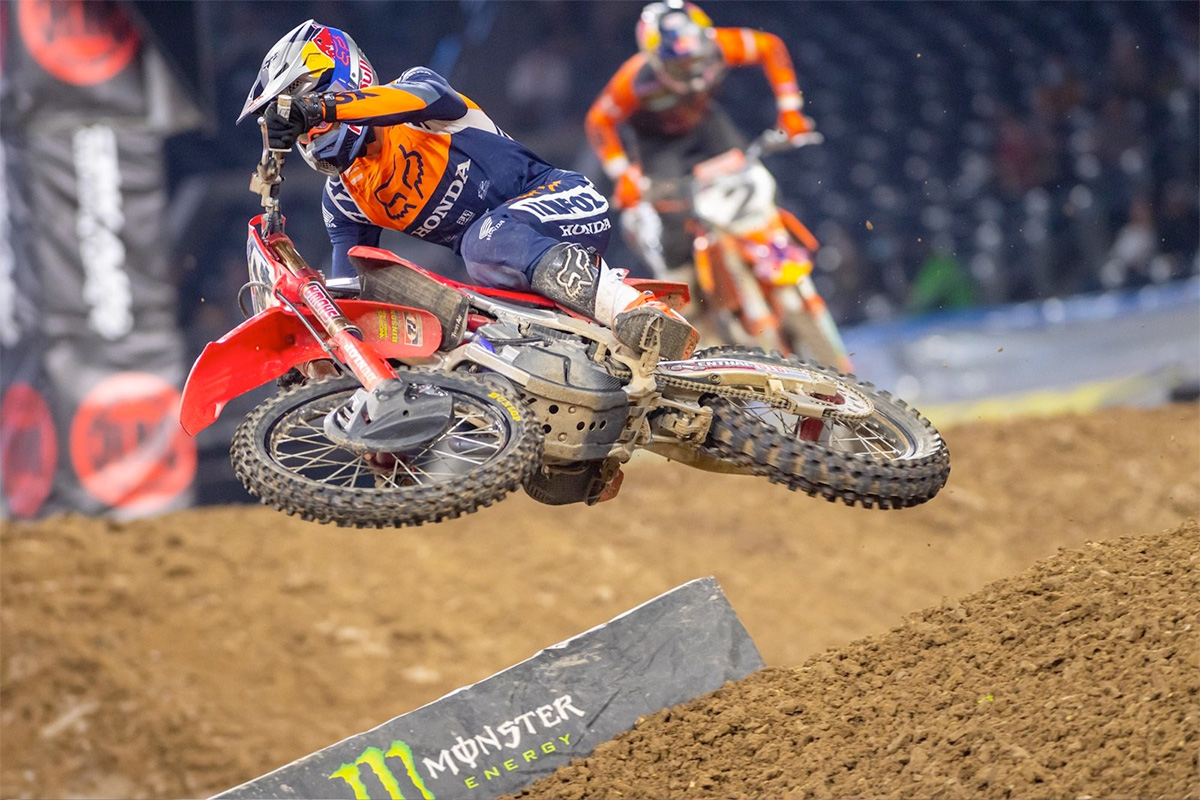 Ken Roczen rode an incredible race but had to settle for second place. It was enough to move him into the points lead without a win yet this season. Photo Credit: Feld Entertainment, Inc.
Barcia was the fastest rider on the track, but a crash in the sand section after the midpoint of the race ended his chances of a podium finish. Roczen pulled, what appeared as, a comfortable lead of over three seconds late in the race, but Webb started his charge and moved up to Roczen's rear wheel in the closing laps. Webb benefitted when a Dean Wilson, while being lapped, flustered Roczen on the final lap; Webb took advantage and tucked inside a 180-degree corner, cut across the ruts, and sealed his spot in the lead.

‰ÛÏIt was a close race the whole time and Kenny [Roczen] rode a solid race with not many mistakes," Webb recounted. "The track was really tricky, easy to over-ride and get impatient. The lappers there at the end was a bummer, I felt like we were going to have a really good battle, and obviously we did, but the lappers were really tough tonight. I hung in there and I pounced on that last lap and made it happen. I‰Ûªve really got to give it up to my team, they‰Ûªre amazing.‰Û 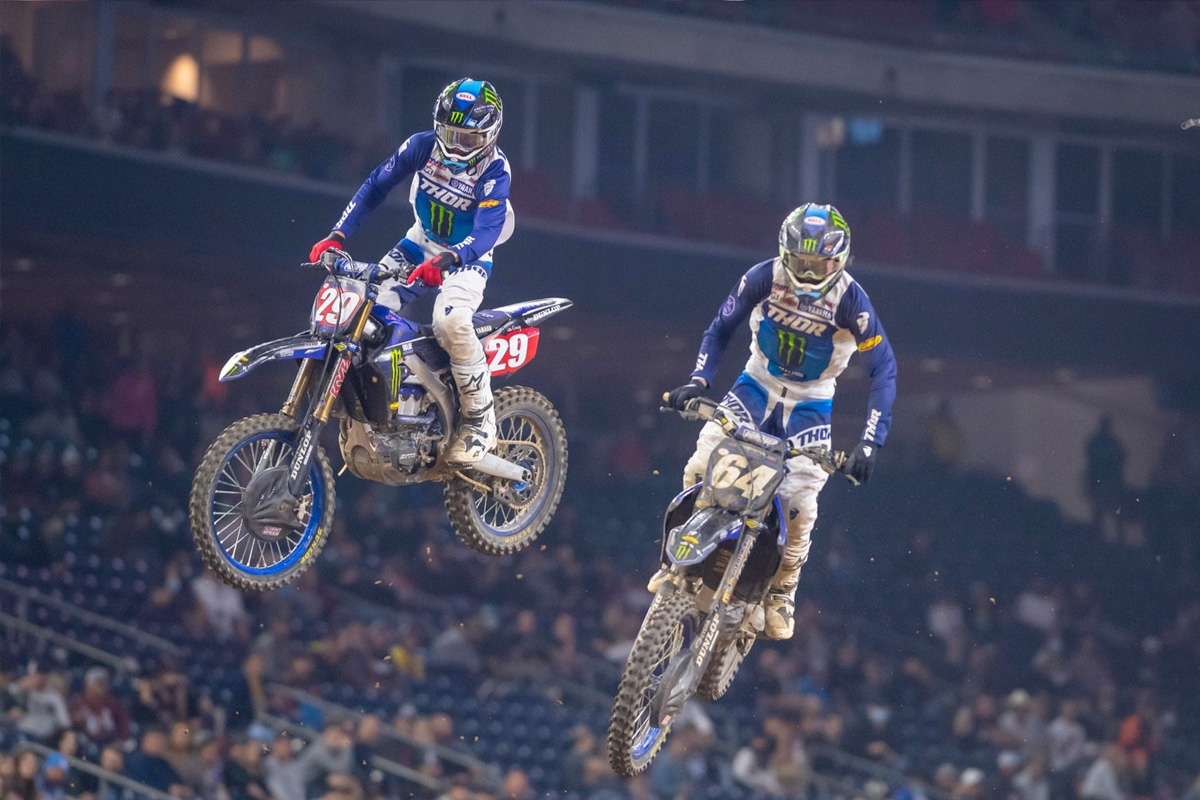 Colt Nichols battled his Yamaha teammate and earned his second career win in the 250SX Class. Photo Credit: Feld Entertainment, Inc.
The Eastern Regional 250SX Class delivered its own excitement as Christian Craig took the early lead and looked poised to repeat his round one win, but his teammate Colt Nichols kept close and made his first pass into the lead with just under three minutes left on the race clock.

Craig fought back by, but within two laps Nichols charged past again and made it stick to put himself into a title points tie with Craig. Last weekend's first-time winner, Jett Lawrence, got a bad jump at the start and had to play catch up. An aggressive pass on Michael Mosiman for third earned the Australian rider a podium on the night. 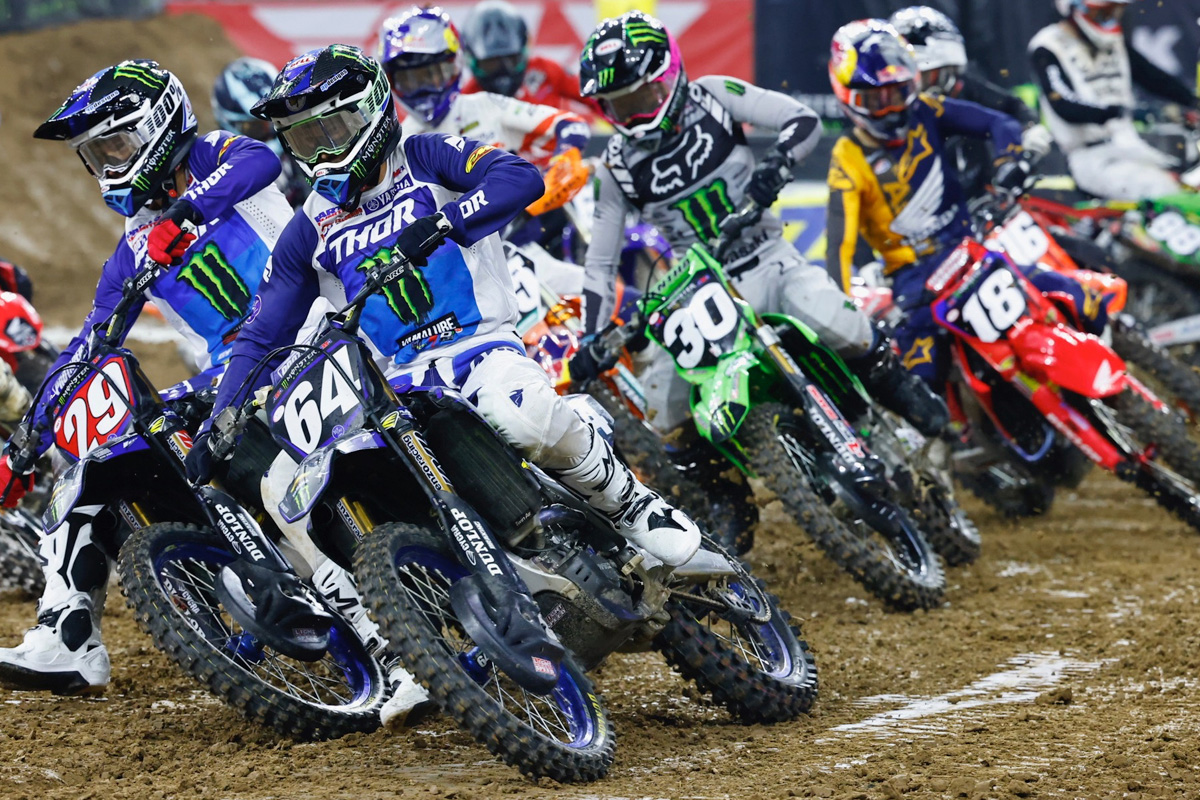 The 250 class gets off to a jam packed start.
‰ÛÏIt felt just like another day at the Yamaha test track out in California with me and Christian just kind of trading laps," Nichols said. "I got a good start. I‰Ûªve been struggling with my starts all day, so I‰Ûªm glad we turned that around. I really just tried to be patient. I knew where he was a little faster, so I tried to pick up on a few lines. It felt great to finally get a win. It has been a while so I‰Ûªm going to soak it in. It‰Ûªs awesome to have the red plate, me and Christian will be sharing it so that is cool for the team. I‰Ûªm looking forward to Indy and ready to keep the momentum rolling.‰Û