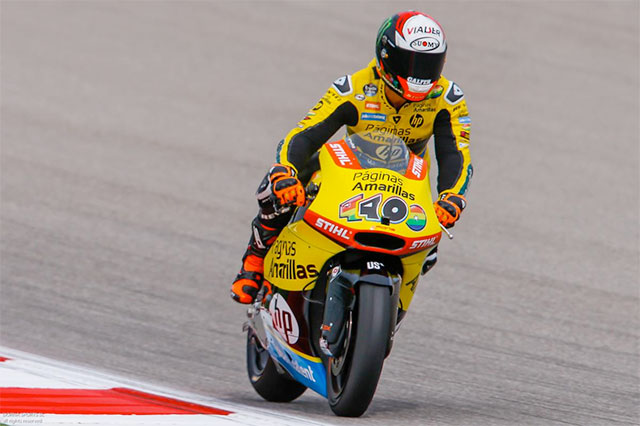 Alex Rins and Sam Lowes were in a league of their own in America, the Spaniard taking his first win of 2016 from Lowes as Zarco ends third.

Starting in pole position for the first time in 2016, Alex Rins (Paginas Amarillas HP 40) looked to be back to his best as the Moto2 World Championship lined up on the grid for the Red Bull Grand Prix of The Americas. There were a number of developments down the grid, Franco Morbidelli (Estrella Galicia 0,0 Marc VDS) lining up on a completely rebuilt bike in ninth.

All riders in the intermediate class opted for the same tyre combination: medium front and hard rear. Riders had been experiencing a drop in the tyres after four or five laps in practice.

The lights went out and it was Dominique Aegerter (CarXpert Interwetten) who led the 28 rider field uphill into the tight Turn 1. His lead wouldn‰Ûªt last as Alex Rins and Johann Zarco (Ajo Motorsport) slipped back past him, a number of other riders sent wide but all remaining upright. A strong first lap would see Rins cross the line over half a second ahead of second place, several aggressive moves from Sam Lowes (Federal Oil Gresini Moto2) helping to bunch the group up.

Lowes continued on like a man possessed, pushing his way through on Aegerter with ease and setting his sights on Zarco. Before the second lap was over, Lowes was leading the second group and frantically pushing to stop Rins from running away even further. On the second lap it was also announced that Axel Pons (AGR Team) and Lorenzo Baldassarri (Forward Team) were handed ride through penalties for jump starts. 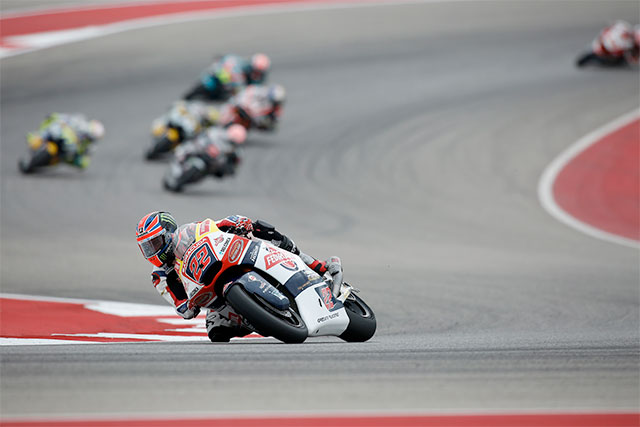 Brit Sam Lowes got more points on the board towards his championship lead with a strong second in Texas.
Immediately in the 2‰Ûª09s, Lowes broke away from the chasing pack and quickly reduced Rins‰Ûª lead to under a second. Zarco remained in third as Jonas Folger (Dynavolt Intact GP) did all he could to get past, the German running off track on multiple occasions as he looked for his chance. As Folger dropped back, Aegerter took up his cause and hunted for a way through on Zarco. The battle for third allowed Lowes and Rins to extend their advantage.

Able to consistently produce laps in the 2‰Ûª09s, Lowes was able to slowly eat into Rins‰Ûª lead a tenth at a time. There was no such steady progress in the chasing group as Aegerter slammed through to third, his teammate Tom Luthi (Garage Plus Interwetten) following him through at Turn 12 as he got past Zarco on the brakes. With Zarco no longer slowing him down, Aegerter immediately set his personal best lap of the race with clear track now ahead of him.

On lap seven, Rins was able to respond to Lowes‰Ûª challenge and open his lead to over half a second once more. Behind, Simone Corsi (Speed Up Racing) battled with Takaaki Nakagami (Idemitsu Honda Team Asia) as the pair joined the battle for the final podium step. After a slow start to the race, Zarco was able to get himself back to the head of the group.

Zarco would not have it his own way as Luthi cut back ahead of him once more, the French rider now sandwiched between two Swiss riders with Aegerter behind in fifth. The second group would continue to brawl, Corsi and Nakagami capitalising on every chance they were given.

Lowes and Rins went through the motions of their dance at the front, the Brit edging in ever so slightly before Rins responded to maintain the gap at just over half a second. Lowes worked hard to stay with Rins as Zarco did the same with Luthi, all the while Nakagami edged closer and closer to a potential podium return. The Japanese rider tried an unconventional line at Turn 11, but was unable to stop his bike and dropped down to fifth.

With five laps remaining, Zarco once more awoke and pulled himself back into third. Nakagami continued to show well, but soon found himself pushed off at Turn 1 by Simone Corsi, the Italian stealing the inside line. This gave Zarco breathing room once again, by this stage the podium seemed set as Lowes was now over a second back on Rins.

But Folger had other ideas, the German, having had a quiet race at the back of the chasing group, burst into life as he began to battle with Luthi for fifth place. With this the final lap of the race began, Corsi once again throwing it up the inside at Turn 1, this time passing Luthi without issue.

For the third time in his intermediate class career, Alex Rins took victory. The Spaniard dominated the field and crossed the line two seconds ahead of Lowes who was in turn over six seconds ahead of Johann Zarco.

Aegerter would take fourth ahead of Folger.

For the first time in his career, Lowes leads the Moto2 World Championship with 47 points, but Alex Rins sits just a point behind on 46 and Zarco also remains in contention with 45 championship points. Luthi slips to fourth in the standings as he leaves Austin with 43 points.

At the start of lap six, Danny Kent (Leopard Racing) pulled into the pits with a clutch issue. It would be a disastrous day for the Leopard Racing team as Miguel Oliveira fell at Turn 6, retiring soon after.

Luca Marini (Forward Team) suffered a fall at Turn 11, brining Robin Mulhauser (CarXpert Interwetten) down with him. Both were unharmed.

Efren Vazquez (JPMoto Malaysia) continues to receive treatment at a local hospital, having being diagnosed with a compressed T12 vertebra and a fractured right ankle after falling during Qualifying.

Full championship standings for the Moto2‰ã¢ World Championship can be seen here.