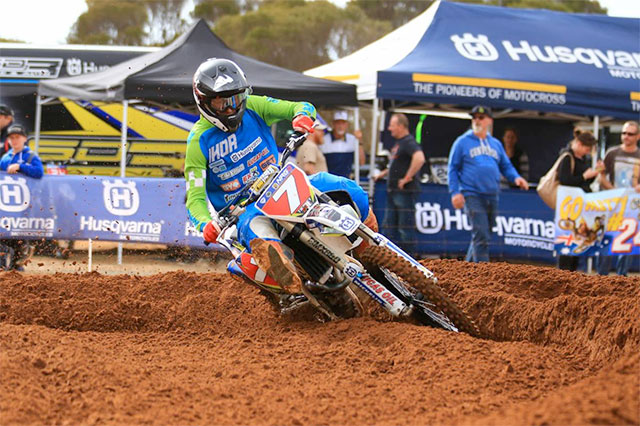 The Pirelli MXD class made their final dash for championship points ahead of their mid-season break today, with red plate holder Connor Tierney maintaining the championship lead and snatching up another overall victory at round four of the Motul MX Nationals at Murray Bridge in South Australia.

From the minute the Pirelli MXD Class hit the track for practice and qualifying this morning, riders relished in the opportunity to take on the soft red surface, and it was Husqvarna mounted Kaleb Barham who recorded the fastest lap time with a 1:47.407 granting him first pick of the Pirelli MXD grid.

When bikes lined up for moto one, the sun beamed down on the Murray Bridge track, providing ideal conditions for the battles to take place. And when the gates dropped, it was KTM mounted youngster Cooper Pozniak who snatched up the the first MXStore hole shot of the day, however it took only a few turns for Husqvarna‰Ûªs Tierney to move in to the opening race lead.

From there and with only two laps in the books, Tierney began to pull away from the lead group, while Pozniak maintained an impressive second position, followed by Barham, Yamalube Yamaha‰Ûªs Mitchell Evans, and Zak Small.

By the time the MXD class had reached the eight-minute mark in moto one, Barham had applied enough pressure on Pozniak to snatch away second place from the youngster, while Evans also made his way past Pozniak to move in to third.

From there, Evans‰Ûª charge to the front became even stronger, and before long, Barham also became a victim of the Yamalube Yamaha rider‰Ûªs speed - Evans breezing past to move in to second place and begin his hunt for race leader Tierney.

With just over five minutes remaining, both Tierney and Evans went to battle for the top Pirelli MXD position, while Pozniak held down third from Raceline Pirelli KTM‰Ûªs Wade Kirkland in fourth, followed by Yamalube Yamaha Racing‰Ûªs Jordan Hill who completed the top five.

As moto one for the Pirelli MXD class reached its final stages, Evans‰Ûª came to the realization that he needed to put the foot down if he wanted to snatch away the lead from Tierney - however the pressure to get the job done proved to be too much for Evans ‰ÛÒ crashing in the back section of the track, allowing Tierney to accelerate away.

However, with Evans out of contention for a podium position, teammate Hill stepped up to the plate ‰ÛÒ picking off rider after rider in only a few short laps, to move in to an outstanding second position ahead of Pozniak in third.

And when the chequered flag flew on race one, it was Husqvarna‰Ûªs Tierney who fought off tough competition to take the first Pirelli MXD victory for the day, while Yamalube Yamaha Racing Team‰Ûªs Hill crossed the line in second, ahead of Pozniak in third, while Kirkland and Barham finished in fourth and fifth places respectively.

When the second race for the Pirelli MXD class got underway, it was once again Pozniak who showcased his starting capabilities, however it wasn‰Ûªt long before Yamalube Yamaha Racing Team‰Ûªs Evans once again moved in to the race lead, followed by Pozniak who slotted in to second, and Husqvarna mounted Barham who followed closely behind in third.

After three laps in moto two for the MXD competitors, Evans had stretched out his lead to an impressive eight seconds, while Kirkland had found his way in to second position, relegating Pozniak to third, while red plate holder Tierney held down fourth. Barham who despite showing impressive form in the first few laps, dropped back to fifth position.

With Evans out in front, the excitement on track came from the battle for positions behind him, Kirkland, Tierney and Pozniak all locked in to a three-way fight for second and third places.

With five minutes remaining in moto two, the running order saw Evans out in front, followed by Tierney, Kirkland, Pozniak and Barham. Justin Hart, Small, McManus, Pelz and McCoy all rounded out the top ten standings.

When riders received the last lap board, Evans was well and truly in the box seat to take the race two victory, while Tierney also looked comfortable in second place ahead of Kirkland who continued to maintain third.

And when bikes crossed the finish line for the final time today, it was Yamalube Yamaha Racing Team‰Ûªs Evans who redeemed himself after a tough first moto, to take the race two win, followed by Tierney in second, while Raceline‰Ûªs Kirkland wrapped up the final race of the day in third.

When the points were tallied from two hard fought races, Tierney‰Ûªs consistent 1,2 finishes awarded him the round four Pirelli MXD victory, while KTM mounted Kirkland took a second consecutive podium concluding the round in second, followed by KTM‰Ûªs Pozniak who finished racing in Murray Bridge in third overall.

‰ÛÏI‰Ûªm super happy with how today has gone. I came out here to extend the points lead and that‰Ûªs what I‰Ûªve done ‰ÛÒ I‰Ûªve got the overall for the day and the red plate so I really couldn‰Ûªt be happier,‰Û