Connor Tierney back in business for WBR Bulk Nutrients 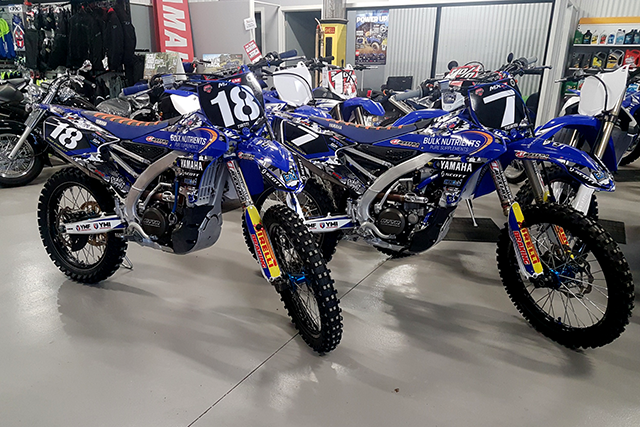 After a very long off season with plenty of rehab, WBR Bulk Nutrients rider Connor Tierney the former MXD hotshot from WA is set to make his debut in MX2 this weekends round of the Motul MX Nationals in Nowra, NSW.

After a dominating start to MXD in 2016, Connor injured his ACL late, but soldiered on to finish a close second to Mitch Evans in the championship.

Tierney has been signed with WBR Bulk Nutrients since the beginning of 2017, and while his debut comes a lot later than he and the team and hoped, there‰Ûªs excitement in the air for Nowra.

Team manager Travis Whitten said, ‰ÛÏWe worked with Connor and encouraged him to delay his comeback until he was completely ready. It‰Ûªs been impressive how hard he has worked off the bike, and we‰Ûªve gotten to know him very well since the start of the year. Connor completed his first race in 2017, the famous Manjimup 15,000 after only a week‰Ûªs practise back on the bike, recently. It‰Ûªs awesome to finally have three riders ready to go at Nowra!"

While Connor‰Ûªs results were impressive at Manjimup, landing a top 10 finish outright, he knows his speed and bike fitness has improved massively after 5 solid weeks training. Over the last few weeks he and Aaron Tanti have been training hard in Echuca, pushing each other at every opportunity.

Team boss Travis has been very impressed to see the progression of Connor in such a short time, and with Connor making the move from WA to Echuca, his progress under the Whitten‰Ûªs should continue.

In Connor‰Ûªs own words he is wrapt to be back on the bike and is very impressed with how his 2017 Yamaha is working. While he worked extensively with a personal trainer to keep his fitness up, nothing replaces bike time ‰ÛÒ which he has finally been able to get.

Team-mate Aaron Tanti who has shown flashes of brilliance through the season is hoping his luck will improve a little in the second half of the season, a few results in the latter half of the year backing up his blinding speed would be fitting.

Tanti‰Ûªs best opportunity for a race win was cruelly taken from him at Conondale, no thanks to a badly timed flat tyre.

The teams sole MXD racer Hugh McKay had a more relaxed mid-season break, nursing an injury himself which occurred in a local round at the start of the break. Hugh has solidly improved his results through the year, reaching his first podium as well as a 4th place. In an overall position of 6th, Hugh is exactly where he wants to be and hopes to move into a top 5 position before the end of the season.