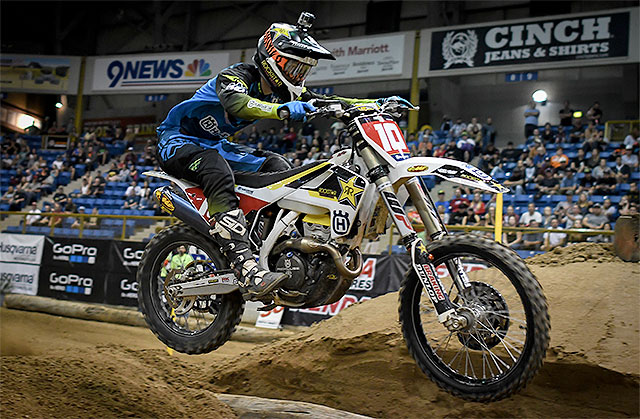 Rockstar Energy Husqvarna Factory Racing's Colton Haaker has taken his fourth win of the season at Round 5 of AMA Endurocross in the mile-high city of Denver, Colorado.

The round 5 course consisted of a water pit, 2 rock turns, the matrix, and a firewood section. Lap times ranged from about 56 seconds to about one minute, making for a great fast paced race. Haaker qualified first from the hot laps that took place earlier in the day, which put him in the first heat race. Haaker's team-mate Mike Brown qualified for the second heat race.

As the flag dropped for heat 1, Haaker leapt out front, claiming the holeshot. From that point on, he never looked back and claimed the win. Heat 2 was holeshot by Mike Brown. He led the entire race with a small lead between him and second place, but he would push for the win.

A night full of action led to a much anticipated main event. Haaker and Brown took off at the start of the race. Haaker claimed the holeshot with Brown following closely behind him.

A small mistake would put Haaker into 3rd place, but he was able to work his way back into 2nd, where he would intensely battle Cody Webb for 1st place. The gap between Haaker and the Webb would stay consistent until there were 2 laps to go. Haaker charged forward and made a great pass, jumping to the inside to take over the lead. With the white flag out, he raced a clean, mistake free lap and claimed his fourth win of the season!

The AMA EnduroCross Championship continues with round six in Seattle,Washington on October 22nd.