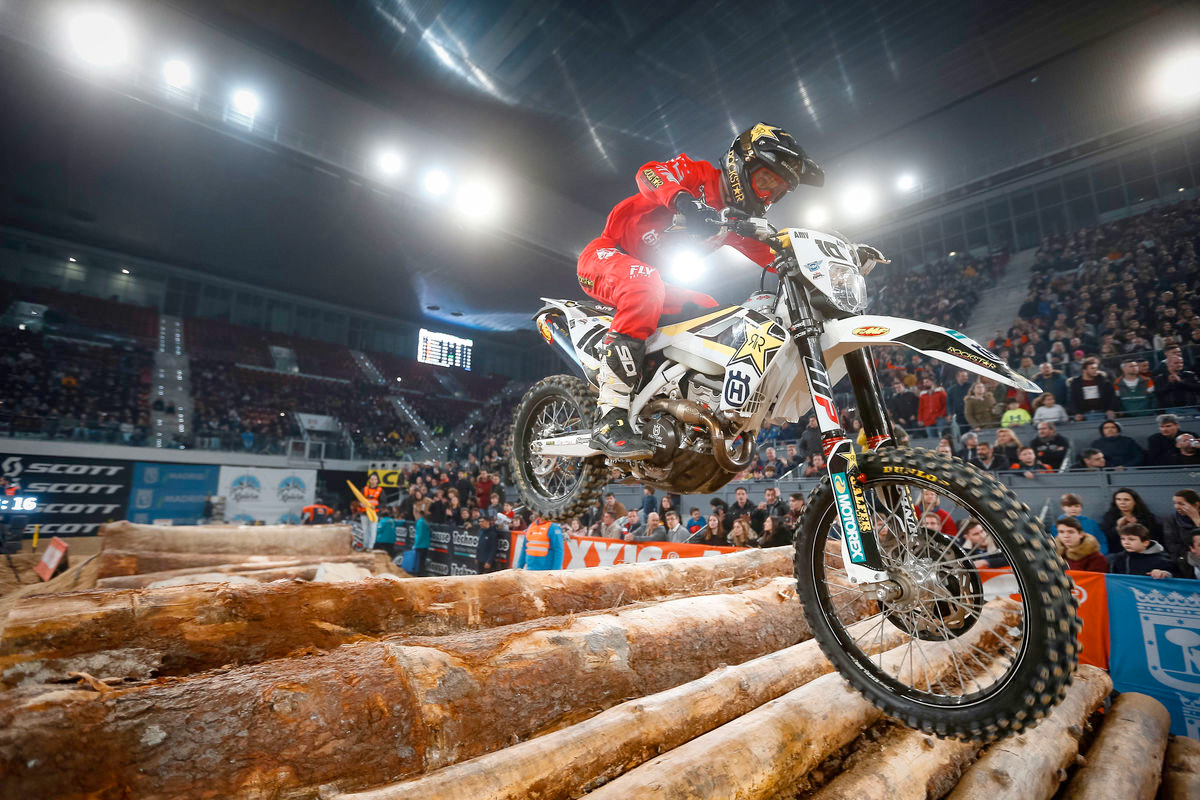 Championship leader going into the round, American Cody Webb, was second ahead of Alfredo Gomez who made a strong return to racing following his injury last time out in Germany to claim third overall.


With round three of the SuperEnduro series in Spain marking the halfway point in this year‰Ûªs championship battle, two-time world champion Haaker arrived in Madrid knowing that a winning result was necessary to lift his title hopes. Feeling comfortable with the course from the off, the Rockstar Energy Husqvarna Factory Racing rider set some impressive lap times in training before transferring his impressive pace into the fastest time for the qualifying SuperPole.

Executing a near-perfect start in race one, Haaker immediately took control of the lead. Breaking away from the rest of the field, he secured his first victory of the night over Taddy Blazusiak and Webb. With the start order reversed for race two, the American tried to ride cautiously on lap one and unfortunately became entangled in a multi-bike collision. Remounting near last, he battled his way up to second. However, becoming stuck on the final rocky corner resulted in a three-way fight to the finish line. Crashing heavily with close rival Taddy Blazusiak, Haaker was lucky to walk away unscathed in third. Webb took the win with Pol Tarres in second. 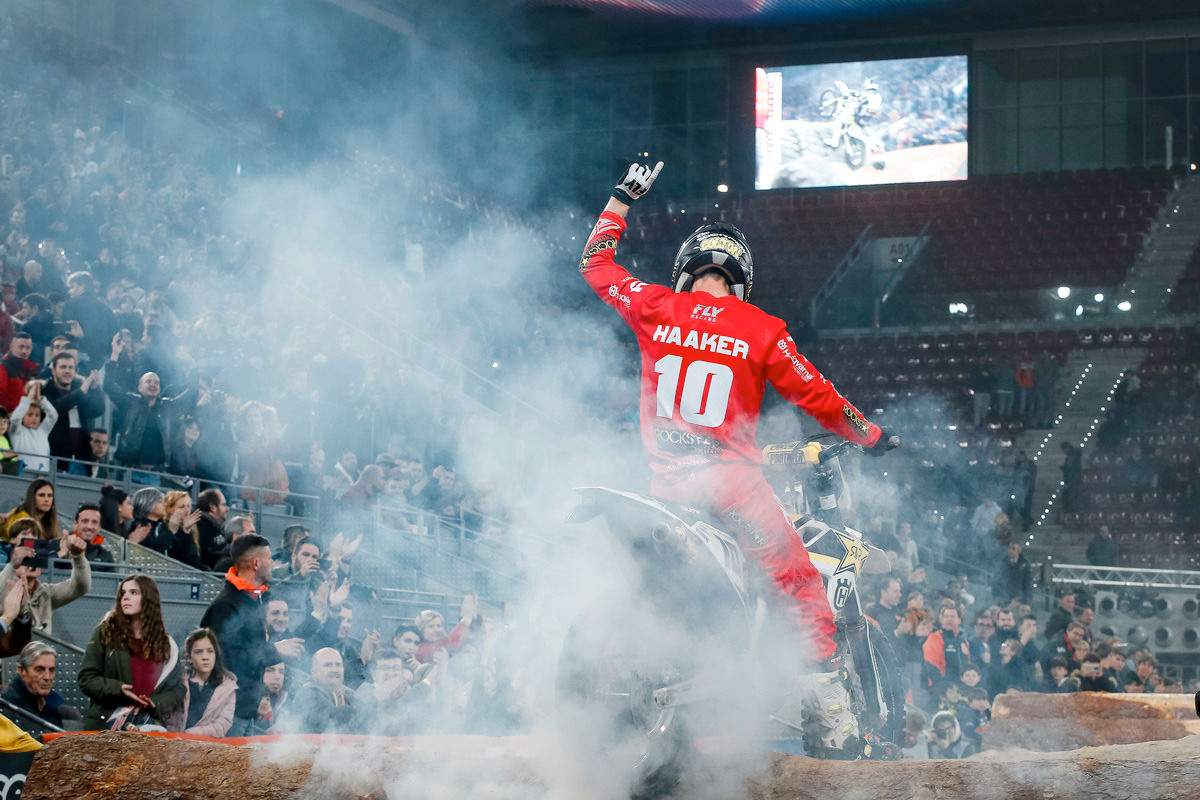 Colton Haaker celebrates his win with a good old fashioned log burnout! Photo: Future7Media
With the overall win up for grabs, Haaker refocused for race three and delivered arguably his best performance of the night. Riding to a commanding 26-second margin of victory, he secured the top step of the podium and took control of the championship lead. Haaker's team-mate Alfredo Gomez was second with David Leonov third.

Unfortunately, a broken chain on lap four forced Webb to stop and make trackside repairs to resolve the issue. Despite his best efforts to rejoin the race, he wasn't classified as a finisher but still ended his night as the overall runner-up.

‰ÛÏIt‰Ûªs feels great to come away tonight with the overall win and also become the new point‰Ûªs leader in the championship," Haaker enthused. "I really wanted to push for the victory tonight and race my way back into title contention and I definitely feel like I did that out there, despite what was a very eventful night on the track.

"From practice I felt good and I felt sharp. I was laying down fast times and not going above myself to do it. SuperPole was a near perfect lap and that rolled across into race one. I put myself in a great position off the start and got into an early lead and took the win. In race two I started cautiously knowing there would be carnage. Unfortunately, I got tangled up in bikes on lap one and had to come from last. I made it to second but bobbled in the final rock corner and that turned into a three-way battle to the finish line. Taddy Blazusiak and myself came together and we both hit the ground hard. Thankfully I was ok for the final race and was able to come out and win that for the overall and with it take the championship lead. We‰Ûªve Budapest in two weeks‰Ûª time and I‰Ûªm looking forward to going there with the leader‰Ûªs red plate.‰Û 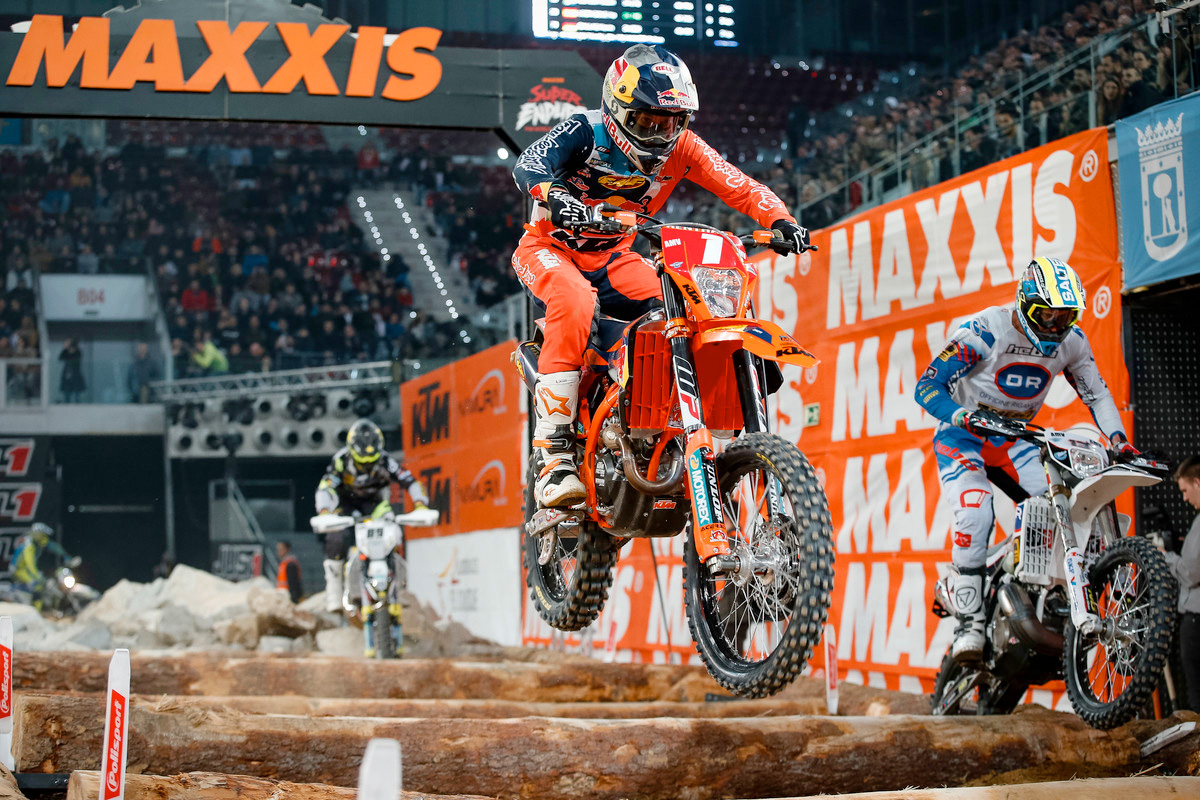 A DNF in the third race saw Cody Webb loose the championship lead but the American has vowed to re-group and will return stronger than ever at round four next month. Photo: Future7Media,
For Webb he saw his championship lead vanish on the night but still has not given up by any means and remains in second, only thirteen points off the lead.

‰ÛÏIt was a tough night for me tonight, but I‰Ûªm happy to take second overall," Webb said. "The first race went well, I struggled to get into a good rhythm but I was pleased with third and knew what I had to do to improve for race two. I got away well in the second race and was able to control the pace from the front and take a clean win. I was probably riding my best of the whole evening in race three. Colton was in front but I was confident I could match his speed and fight for the win. Unfortunately, after a reasonably hard landing, I damaged the bike. I tried my best to fix it in time but it wasn‰Ûªt quite enough. It‰Ûªs upsetting but this is SuperEnduro and anything can happen. I‰Ûªm looking forward to the next race and will try to win back the overall lead.‰Û 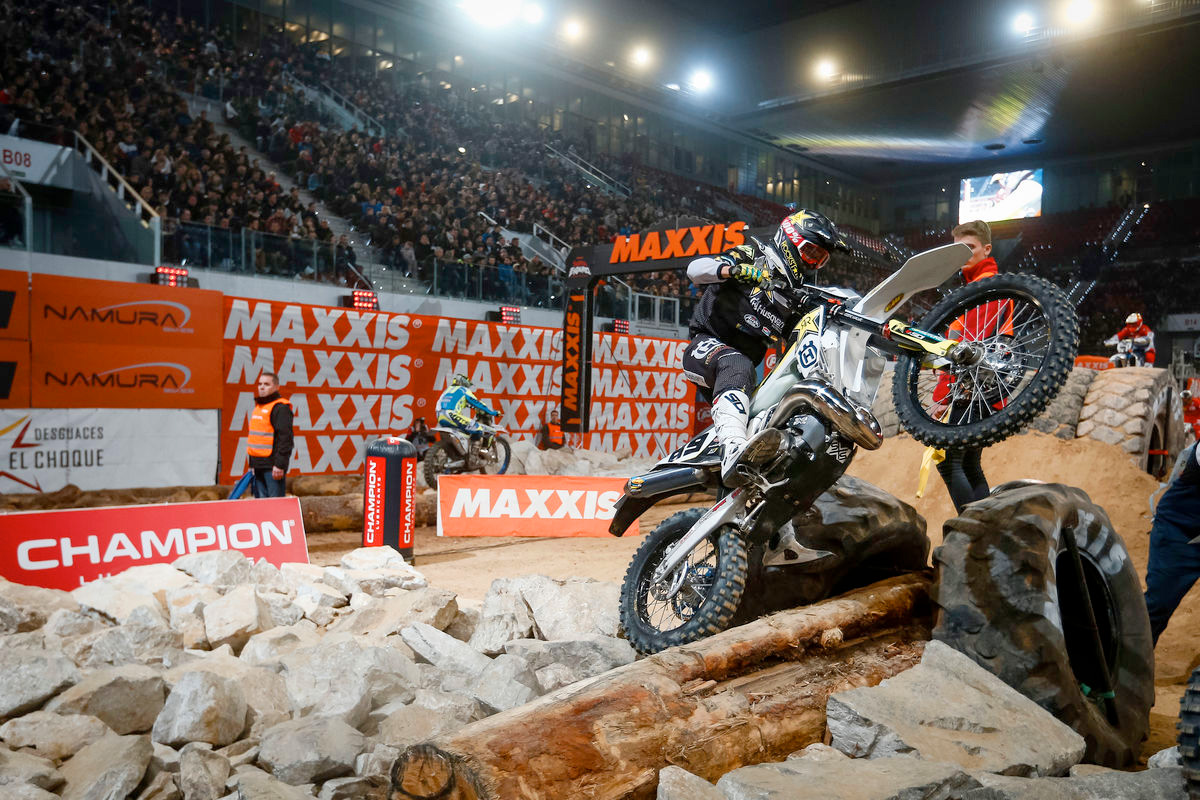 Alfredo Gomez impressed at his home race taking third overall after deciding to race at the last minute following an elbow injury at the previous round. Photo: Future7Media
For Alfredo Gomez, his home race in Madrid was one to savour. Deciding to return to racing following an elbow injury last time out in Germany, Gomez hoped for a top-five result. Feeling better than expected, the Spaniard raced his way into podium contention as the evening progressed.

Ninth in race one, he jumped to fifth in race two. A much-improved start in race three saw him avoid trouble and after holding second place from mid-distance he did enough to secure third overall.

‰ÛÏI can‰Ûªt honestly believe that I‰Ûªve managed to finish third overall tonight," Gomez said. "Two days ago I wasn‰Ûªt sure if I would ride because I‰Ûªm still recovering from an elbow injury that I sustained last time out in Germany. I did some training laps and decided I should try to race. I was aiming for top five at best. But this is my home race and I guess that just makes you want to deliver the best result you can. I rode safe in race one for ninth and then did better in race two for fifth. I got into a good position in race three and with other riders having problems, suddenly I was in second. After that I tried to remain calm and focused and control the position to the finish. Third overall is an amazing result and I have to thank everyone who‰Ûªs helped me during these last few weeks to get to this position - behind the scenes it‰Ûªs been a real team effort.‰Û 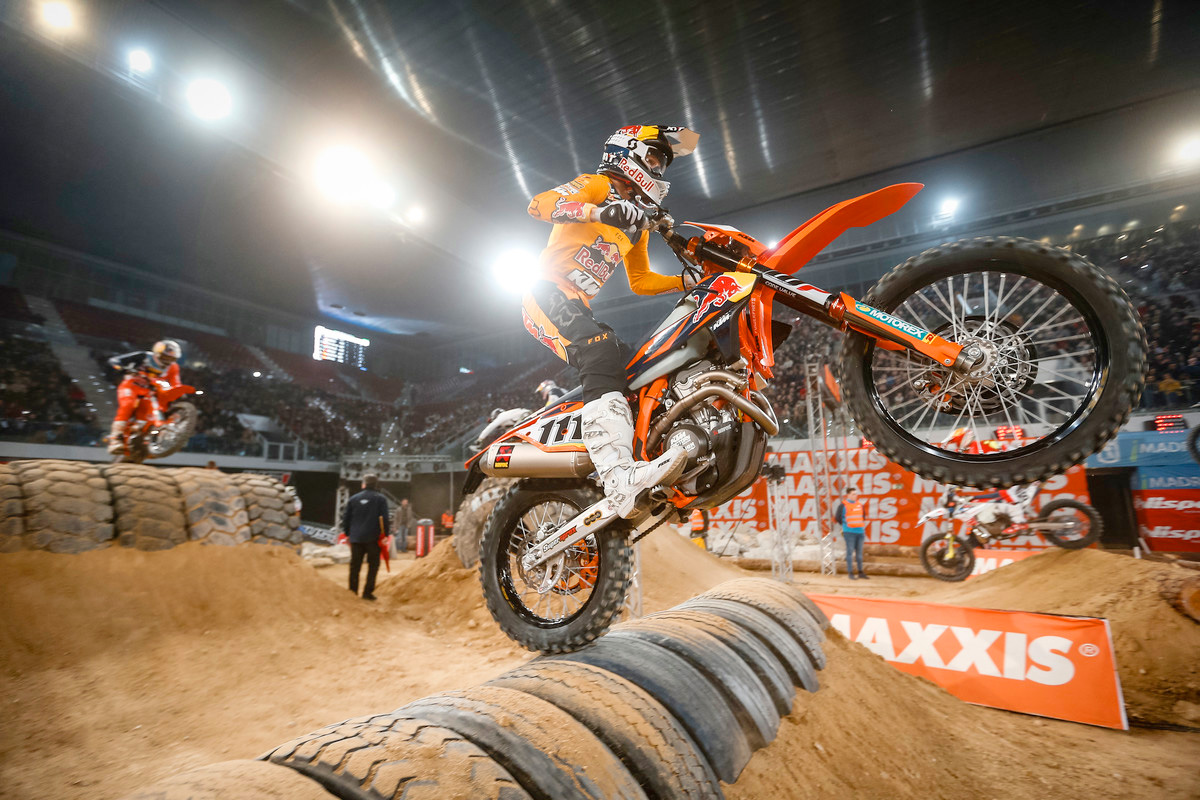 It was a rough night for Taddy Blazusiak with the night ending with an injury but he remains third in the standings. Photo: Future7Media.
For Taddy Blazusiak, the third stop of the SuperEnduro series was challenging due to a series of crashes that ended with an injury to his knee. Entering the Madrid event second in the championship chase, the KTM rider was eager to regain control of the points lead but after finishing third fastest in superpole his night went downhill ending with a ninth overall. Despite the off night he remains third in the standings.

"Unfortunately tonight turned out to be a rough night and so it‰Ûªs going to take a little bit of time to assess what‰Ûªs happened. I had a big crash in race two, but then a very strange and unlucky incident in race three, which resulted in an injury to my left knee," Blazusiak lamented.

"I collided with Colton Haaker and went down hard," Blazusiak explained. "I was banged and bruised pretty good, but lucky to walk away from it relatively unscathed and able to focus on the final moto. In race three I got a great start but then stalled in the rocks and accidentally put my left foot down into a hole. As I fell over, with the bike on top of me, my foot became trapped in the hole and twisted my knee. As yet I don‰Ûªt know how serious things are until I see my doctor to get it checked out but I will do my best to be ready for round four in Budapest.‰Û