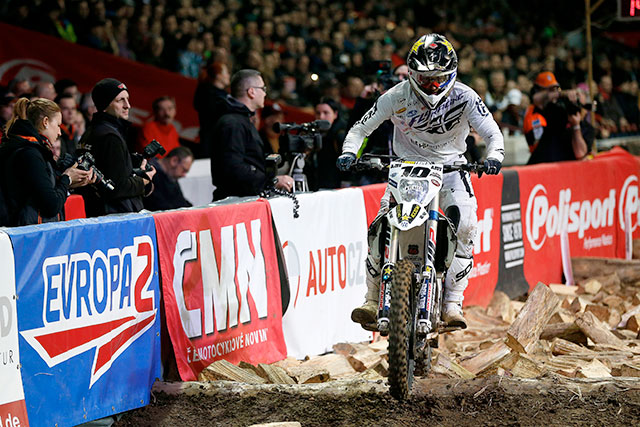 Enjoying his most successful SuperEnduro GP to date, Colton Haaker claimed overall victory at round five of the 2016 FIM SuperEnduro World Championship, held in Prague.

With one round to go Haaker sits second in the championship standings one-point behind leader Jonny Walker.

Demonstrating his ability to challenge for the win at the two previous rounds of the championship, Haaker entered the GP of the Czech Republic determined to hunt for the top step of the podium. Posting the fastest lap in timed practise he then endured his fair share of misfortune in the opening final. Following a great battle with eventual race one winner Taylor Robert, Colton made a mistake in the closing laps and had to settle for third.

Coming back stronger in the reversed start order second final Haaker grabbed the early lead, going on to clinch a comfortable victory. Securing a hard-fought second place in the third and closing final the American celebrated the first overall SuperEnduro victory of his career. Earning valuable championship points Haaker moved to second in the series standings and is now well placed to fight for the title at the final round of the series in Madrid.

"I‰Ûªm pretty stoked with my first overall win," Haaker said. "I thought I rode good in the previous two rounds and kind of felt I was getting closer and closer to the win. I knew it was coming my way since the last round in Brazil. It was tough here in Prague, the track was super tight so it didn‰Ûªt take much to make mistakes. Having my fair share of unlucky moments in the previous races it felt like luck was on my side this time.

"I messed up in Superpole losing a lot of time but then fought hard in all three motos. I‰Ûªve been super consistent in the last few rounds and that‰Ûªs a huge advantage going to the big final in Madrid. I‰Ûªll just give it all once again and hope for the best," he concluded. 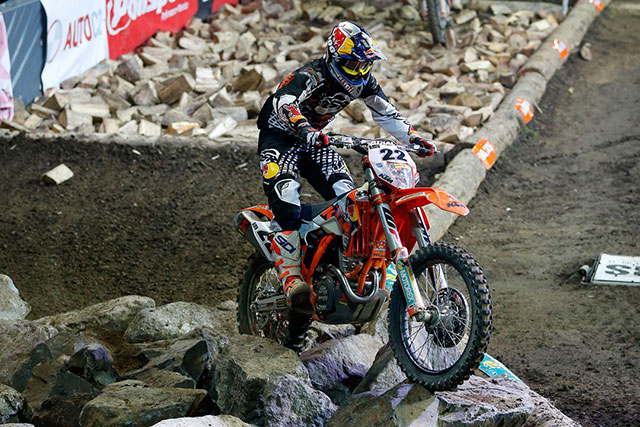 It was a challenging night of racing for the Brit who arrived in Prague holding a nine-point lead in the championship standings. An unlucky moment during practice resulted in Walker hurting his lower right leg, forcing him to race in pain despite several pain-killing injections.

Unwilling to give up, Jonny soldiered on to end his night with 7/6/6 results and a seventh place in the GP‰Ûªs overall standings. With the top three riders in the series now separated by just seven points Walker is determined to give his all at the championship‰Ûªs final event, continuing his battle for the coveted SuperEnduro title.

"I‰Ûªm glad we retained the lead in the standings after such a hard GP," Walker said. "In the first practise, as I was riding through the log pit, my foot hit the ground and I felt something pop in my leg. It must have been muscle damage but it hurt badly.

"I rode off the track and from then on it was a matter of salvaging the situation. I got three lots of painkiller injections but it wasn‰Ûªt good. The pain was almost unbearable, especially when I had to put pressure on my right side. At the end of the day I had to get points for the championship so there weren‰Ûªt many options.

"I kept pushing and I‰Ûªm so happy to come away with the championship lead after such a bad night of racing. Whatever‰Ûªs happened in Prague isn‰Ûªt stopping me from giving my all for the title. I‰Ûªll get things checked and do all I can to be fit for the final race.‰Û