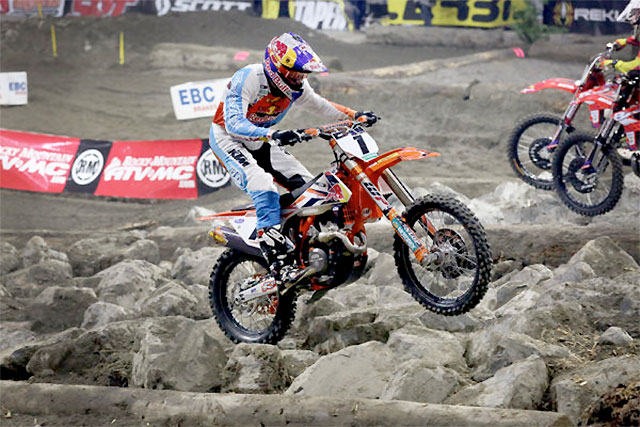 Everett Washington‰Ûªs Xfinity Arena and the packed house of fans filling it were treated with an impressive EnduroCross duel between the top championship contenders as defending two-time Champion Cody Webb went to the front early and held off a blitzing Colton Haaker for the win.

KTM‰Ûªs Webb never looked back on the soft, rutted and loose course after taking the lead on the second lap. Once again, the front-runners were so fast on the night, they lapped third-place finisher, RPM KTM‰Ûªs Ty Tremaine, on the last lap. Ty Tremaine‰Ûªs podium finish was his first in the Pro Class.

Webb, Haaker and Tremaine all won their respective heat races earlier in the night, each getting a bonus point in the championship standings. This was Tremaine‰Ûªs second heat race win in a row and second of his career. Also transferring straight to the main out of their heat races was Beta‰Ûªs Kyle Redmond and Max Gerston, KTM‰Ûªs Taddy Blazusiak and Canadian brothers Wyatt and Trystan Hart. In the first LCQ, which featured Husqvarna‰Ûªs Mike Brown, DA8 Training‰Ûªs Cooper Abbott and Beta‰Ûªs Ty Cullins went 1-2 to keep Brown out of the main event after the matrix got the best of the Husky rider for the first time this year. The second LCQ win went to Nick Thompson followed by Noah Kepple.

Haaker was arguably the fastest racer in the building all night with the fastest daytime Hot Lap, a heat race win and another the top time during the evening Hot Lap, which earned another championship point and first gate pick for the main event. By the time the main event gate dropped, Haaker had gained one more point on Webb in the championship battle. 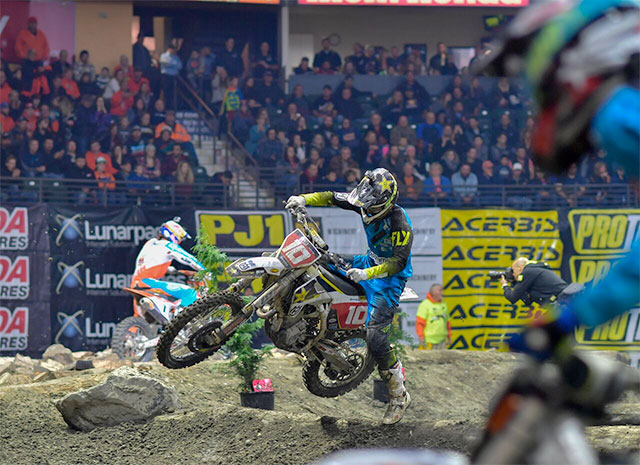 Rockstar Energy Husqvarna Factory Racing's Colton Haaker finished in 2nd at Seattle Endurocross. Photo by: Boulder-Moto
Webb was trying really hard to be that guy all night. He was riding possessed in both Hot Lap sessions to set the tone and, in the evening, earn any extra points possible. But his time didn‰Ûªt come until the main event. However, his undeniable skills through the toughest obstacles on the track were impressive all night. Webb was clearly fastest through a brutal matrix section and was airing the sketchy obstacles-turned-jumps with the biggest names in the sport all night.

When the main event gate dropped, Haaker took the $500 Nexen Tire Holeshot award and put his trademark heater lap into motion aboard the factory Husqvarna, trying to stretch a gap on the field. Nearly next to him around the first turn was returning five-time champion Taddy Blazusiak. Blazusiak would be in contention for only two obstacles before going down and tangling off the track, getting back up in sixth place to start the race. Meanwhile, Webb, Tremaine and SRT-backed Cory Graffunder gave chase to Haaker. Redmond would come out in fifth as the train formed in pursuit of Haaker.

By the second lap, Webb made a pass on Haaker for the lead and didn‰Ûªt look back. Haaker put the heat on over-and-over, but Webb was simply faster and more consistent, especially across the matrix section, so Haaker‰Ûªs charges were always matched. Even when he would gain on the smallest mistakes by Webb, Webb erased the gains nearly as quickly.

By lap four, Webb was running into lapped traffic and Tremaine was pulling a lead over the rest of the top five. By lap five, the lapped traffic was getting heavier and Webb sliced through them cleanly putting more time on Haaker in second. The lapped traffic slowed Tremaine in third more, as well, allowing Redmond to get close enough to apply pressure. Meanwhile, Blazusiak had rebounded up to pass for fifth, only to lose the position with another mistake.

Before lap 10, Webb was lapping into the top five. And once he passed Redmond‰ÛÓwho was in fourth at the time‰ÛÓit took Haaker two laps to get by the same position. That was really the difference for the top two spots and at this point, it was a cruise to the finish for Webb without much pressure from Haaker. In the final laps, a few mistakes by Haaker sealed the deal and Webb went on to the checkers.

Again, the top two passed the entire field, including third-place finisher Tremaine, in route to their dominant performance.

‰ÛÏI really sent it in the Hot Lap tonight because I need to get as many points as I can,‰Û