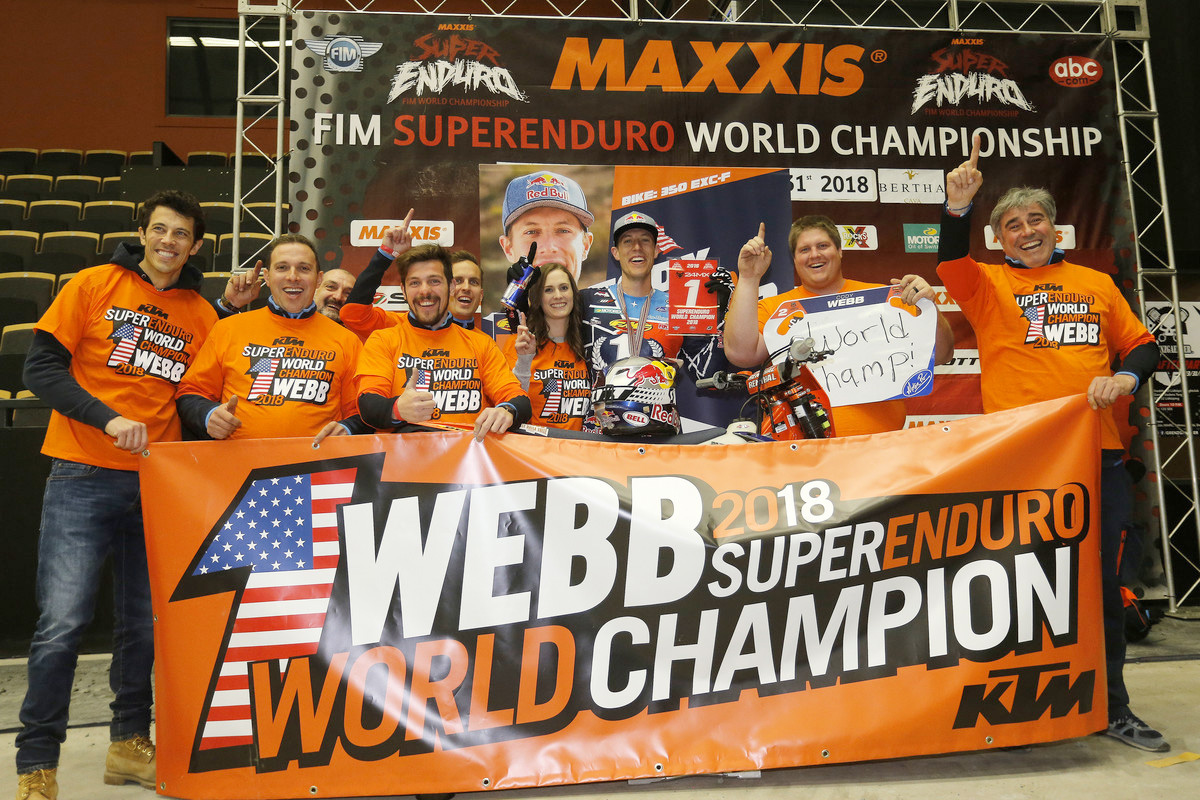 In an action-packed final round, Webb‰Ûªs fifth place overall result was enough to clinch his first ever world title.

Claiming a career-first overall victory, Billy Bolt delivering arguably the best performance of his career. Bolt raced his way to two wins from three starts at the final round to secure the top step of the podium and ended the championship as runner-up in the final standings.

Jonny Walker finished as runner-up on the night with Taddy Blazusiak taking third.

After having a year out of racing in Europe, to come back and be World Champion is amazing ‰ÛÒ this is definitely the most important title I have won so far.

Adding the FIM SuperEnduro World Championship to his 2017 AMA Endurocross title, Cody Webb is undisputedly the man to beat in indoor enduro. Despite a tough final round, the American was overjoyed with his first ever World title.

"I am so happy, I can‰Ûªt tell you what this means to me," Webb enthused. "Of course, I feel bad for Taddy, he was riding really well tonight. The championship has been great and for it to come down to the wire shows how high the quality really is ‰ÛÒ I have so much respect for every single rider in this series. I was riding really tight tonight ‰ÛÒ I think because of my nerves ‰ÛÒ and Taddy was pushing so hard. He had some bad luck tonight, but I‰Ûªve had a couple of bad rounds too.

"After having a year out of racing in Europe, to come back and be World Champion is amazing ‰ÛÒ this is definitely the most important title I have won so far. After my riding tonight, I know there are still some things I have to work on so I‰Ûªll go away now, regroup and prepare for the WESS this summer," Webb concluded. 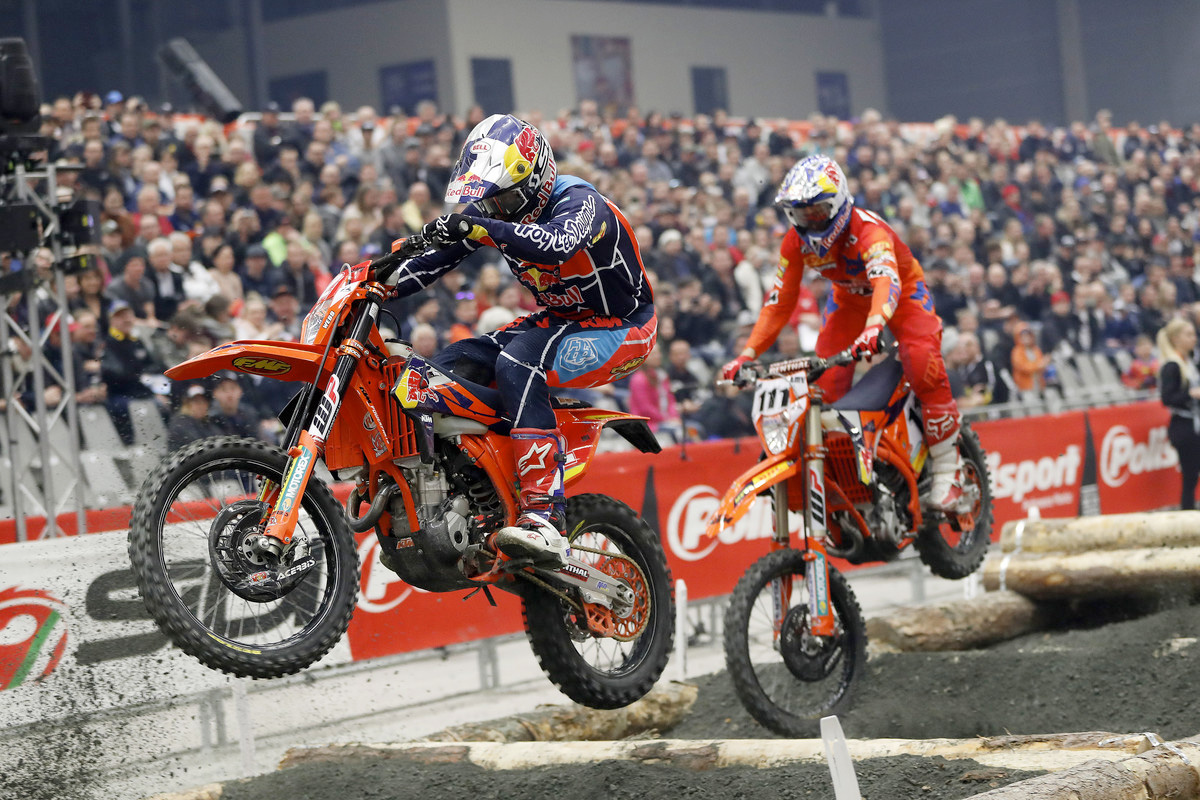 Cody Webb (2) and main championship rival Taddy Blazusiak (111) battled it out right to the final round. Credit: Future7Media
The crowd in the Sparbanken Arena were treated to an incredibly dramatic evening of racing for the season finale.

Since the beginning of the season in December, the world's best SuperEnduro riders have banged bars and fought hard on technical and perilous tracks from Poland, Germany, Spain and the Basque Country, to Sweden. Tonight's final battle in LidkÌ¦ping played out on a track that was very, very fast!

Taddy Blazusiak won the Akrapovic Super Pole on the night in front of Jonny Walker and Cody Webb, closely followed by Colton Haaker and Billy Bolt. The Polish rider was determined to take as many points as possible.

In the very first race of the night, series leader Cody Webb lost half of his advantage to the speed and determination of Blazusiak, and the aggressiveness of Bolt - who was afraid of nothing! By the chequred flag Blazusiak held on for the win ahead of Bolt and Haaker. The first race held in front of thrilled fans contained many mistakes, crashes, and bar-banging, and put the pressure on for the proceeding races! 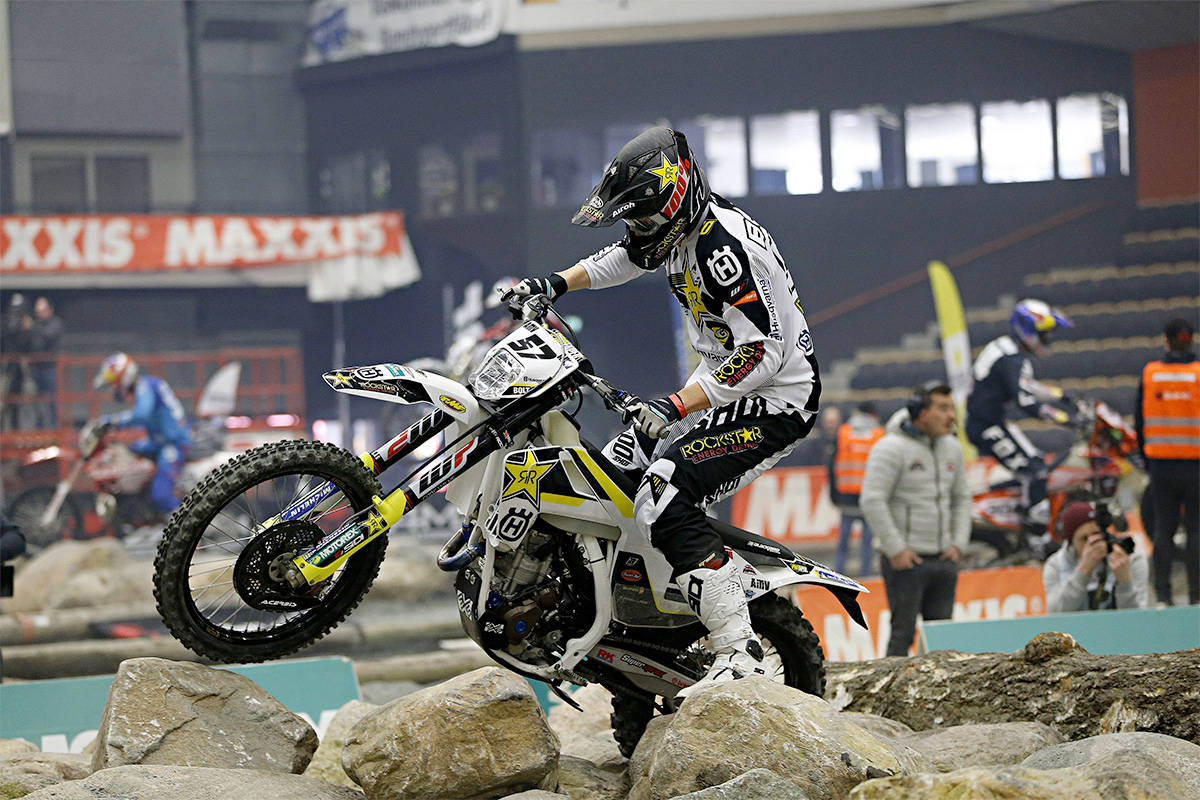 Rockstar Energy Husqvarna Factory Racing Rookie Billy Bolt claimed his first SuperEnduro World Championship victory in Sweden. Credit: Future7Media
The reverse-grid of race two was event more incredible than the first, undoubtedly changed the course of SuperEnduro history. The race between Bolt, Blazusiak and Webb, all trying to catch Manuel Lettenbichler who had taken the lead with a very good start. While Webb faltered and fell several times, the unthinkable occurred to Taddy Blazusiak
the persistent Pole was forced to stop as his rear suspension broke. This DNF cost him dearly, he needed 4 more points to keep the fight with his American rival and go for gold in the 3rd race. While it was terrible misfortune for Blazusiak, it was happiness for Webb, who became World Champion after the unexpected abandonment of his rival! A title as precarious as unpredictable, and a real turn up for the books for SuperEnduro fans the world over. 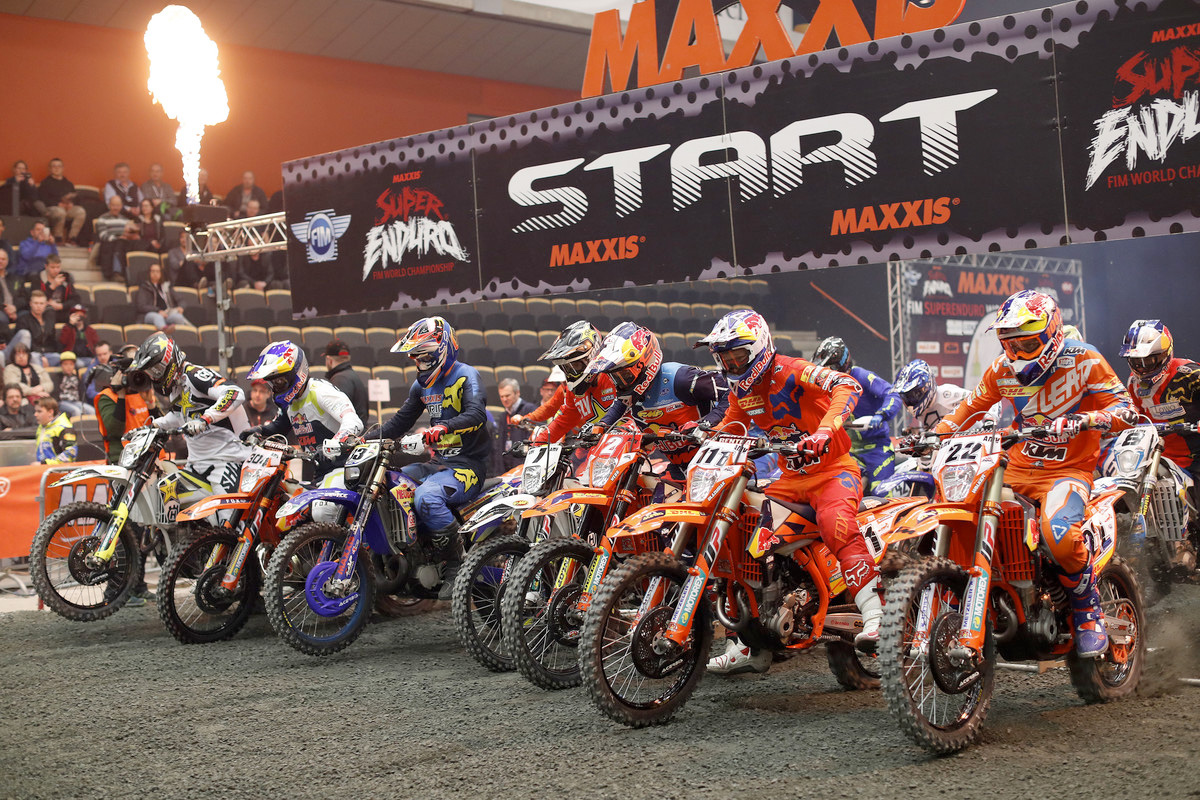 The final round of the 2018 FIM SuperEnduro World Champion at Sparbanken Arena in Sweeden provided plenty of drama. Credit: Future7Media
The third race was where Billy Bolt finally put it to his older rivals! The rookie flew through the last race of the night, skilfully crossing the many obstacles and easily beating much more experienced riders. Even though, for many people, the focus was on the winner of the World Championship, the Brit fought to the end. Bolt provided a spectacular final race of the season, rocketing himself to an overall victory and snatching second in the championship from Blazusiak.

‰ÛÏIt‰Ûªs been the perfect end to the series ‰ÛÓ winning my first round overall and then ending the championship as runner-up," Bolt said. "I couldn‰Ûªt ask for more than that, especially in my rookie season. Tonight was a great night and I felt my riding really came together to take the overall victory.

"We‰Ûªve worked tirelessly as a team to improve little by little and the end result has paid off with the top step of the podium here in Sweden," the Rookie continued. "My speed wasn‰Ûªt any better or worse than previous rounds, but my mistakes were fewer and that‰Ûªs made the difference. I felt much more consistent in my riding and was able to handle the intensity better, taking two race wins tonight.

"Regards the final championship standings it was a shame for Taddy Blazusiak to have an issue like he did and it definitely swayed the end result in my favour, but I guess that‰Ûªs the luck of racing sometimes. Finally, I just wanted to say a huge thanks to the Rockstar Energy Husqvarna Factory Racing team for their support and belief in me to get this result," the 19-year-old concluded. 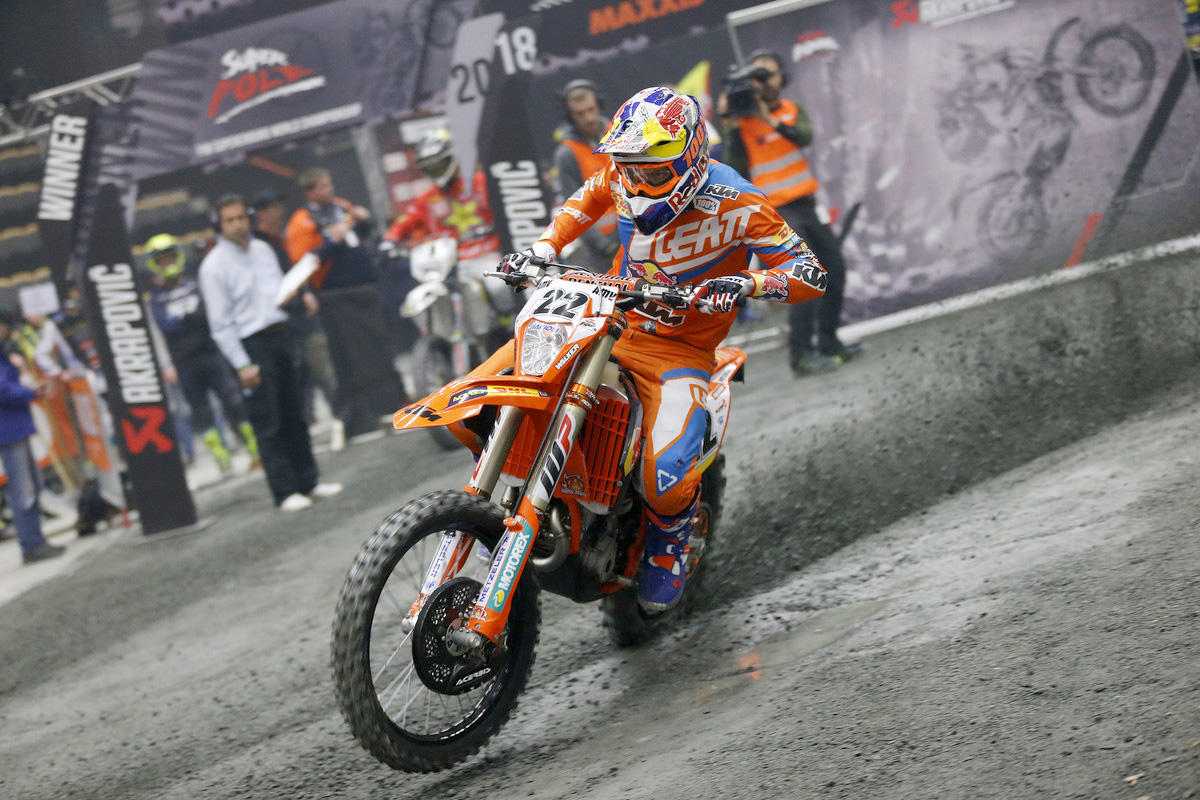 "It was a tough night tonight - second overall with a 5-4-3 result shows just how tricky the track was and I think everyone found it hard. My pace definitely got better as the night went on and to finish as runner-up on the night is great," Walker said. "I won the SuperPole award for the season, which shows my speed is definitely good enough, I just need to work a little on my consistency. With the WESS not far away now, I‰Ûªll start working on the outdoor races and the different challenges for the rest of the year.‰Û 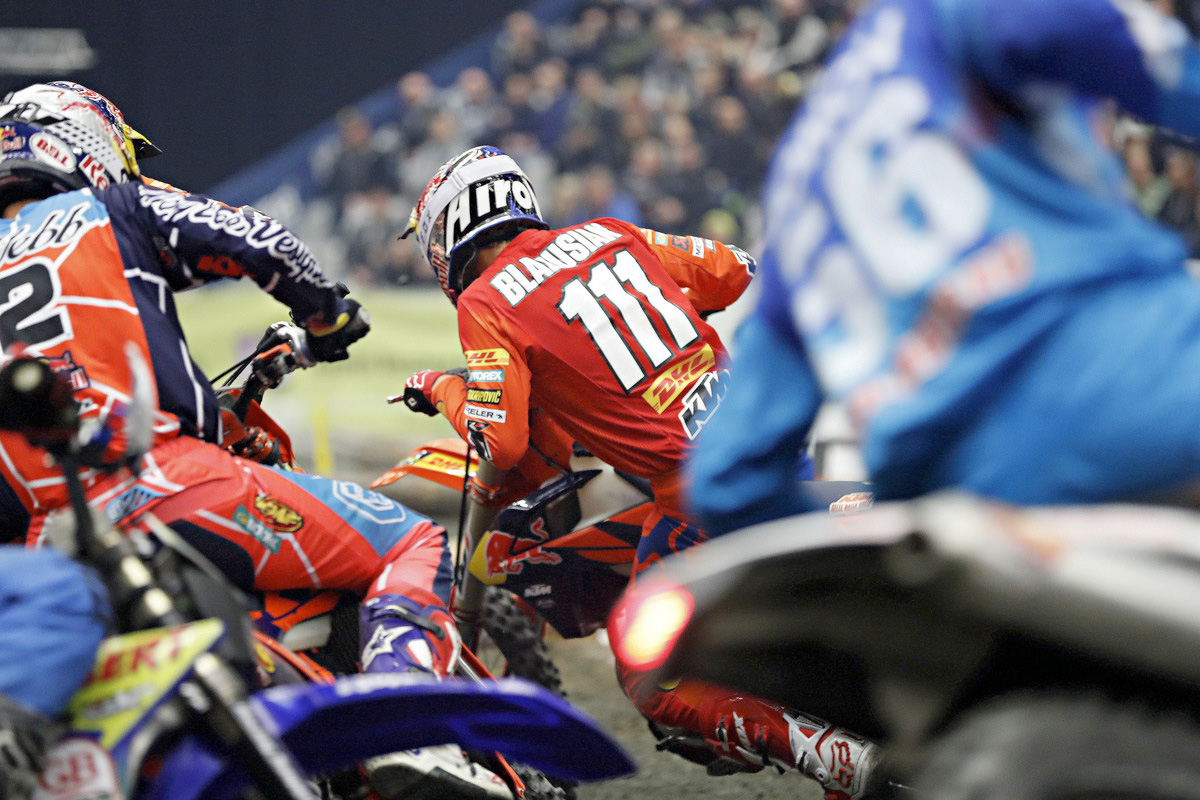 Taddy Blazusiak's (111) title fight came to en end in the second race when his bike expired and effectively handing the title to Cody Webb. Credit: Future7Media
To come back from such disappointment and challenge for the win in the final race shows the spirit of Taddy Blazusiak. Just months after announcing his return to competitive competition, Taddy was incredibly close to taking a seventh world title. The multiple world champion has vowed to come back and try again come 2019.

"I am so disappointed. Words can‰Ûªt describe how I feel right now," a dejected Blazusiak said. "On the positive side, I know I was fast tonight, I was riding really well. I was feeling good on the bike, practice and SuperPole went well and then in the first race, I was able to set a good, fast pace at the front.

"Going into the second race, I was only eight points down on Cody in the championship and I knew he had made a couple of mistakes in the first race," Blazusiak continued. "To be forced to retire like that is bad at any time, but to lose the championship like that is heart-breaking. I got back for the third race, but my heart wasn‰Ûªt quite in it. To come back to racing and be so close to taking another world title is definitely encouraging though. I think my pace towards the end of the season was the best. I might have missed out this time, but I‰Ûªll be back next year to take my seventh championship.‰Û 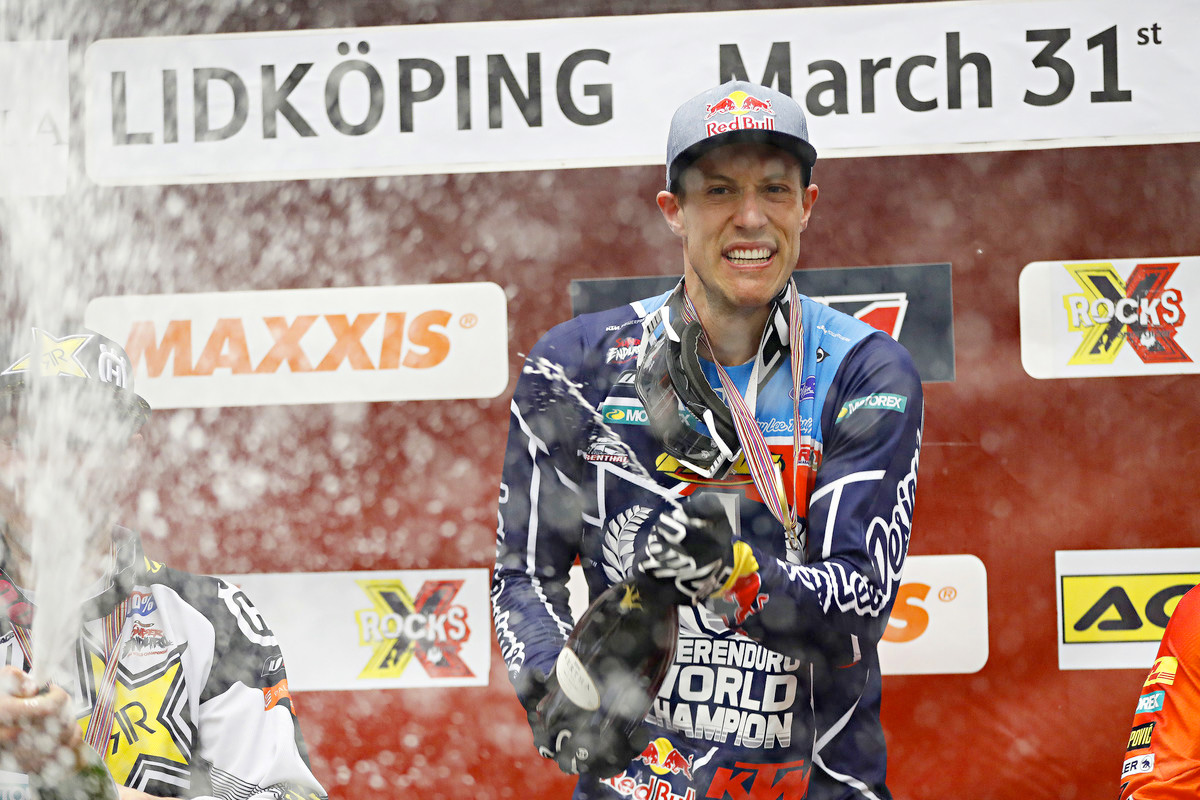