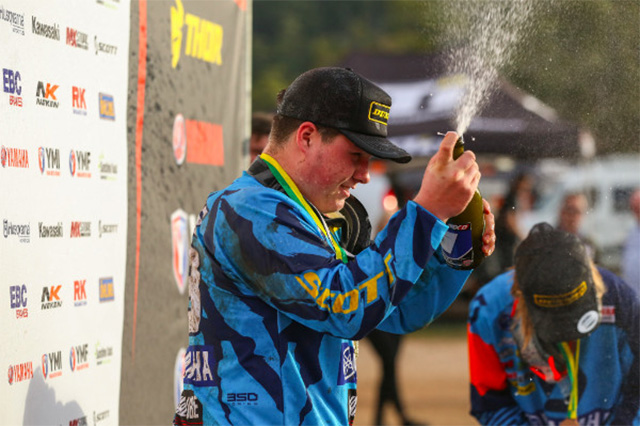 Yamalube Yamaha Racing Team‰Ûªs Cody Dyce clinched his first ever professional racing title at Round 8 of the Motul MX Nationals today, with plenty of excitement playing out across both of the Pirelli MXD championship deciding motos in Port Macquarie.

The hotly contested MXD Championship officially wrapped up this afternoon, but incredibly in only took a single race to decide this year‰Ûªs champ, with the red plate holder Jy Roberts ruled out of racing early, after sustaining a shoulder injury during qualifying.

With a start proving to be more important than ever at Round 8, when the Pirelli MXD class headed out for qualifying this morning, riders left no stone unturned in their bid to secure the fastest lap time, and of course the all important first gate pick.

With the possibility of a championship well and truly on his mind this morning, Roberts set the top qualifying time aboard his Husqvarna (1:51.080), however a nasty crash mid-way through the session saw him forced to leave the track clutching his arm and an uncertainty to race. Second fastest in qualifying was Husqvarna‰Ûªs Riley Dukes (1:51.705), followed by Callum Norton (KTM) in third (1:52.040). 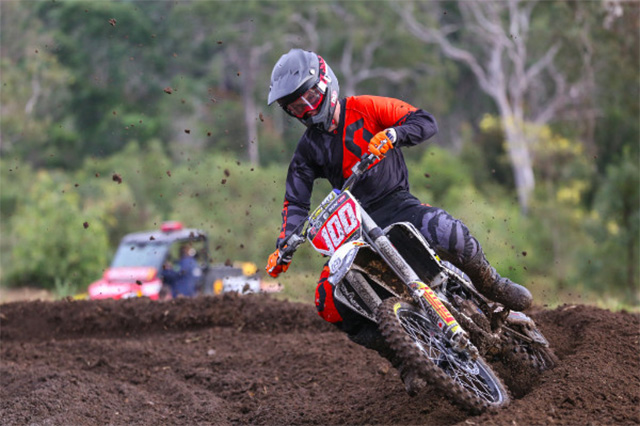 Husqvarna's Jy Roberts lead the championship going into the final round but a shoulder injury in qualifying ended his chances. Credit: MXN Images
Moto 1

When riders headed to the line for their first race of the day, crowds searched for the number 100 machine - the points leader Roberts. Unfortunately, as the Pirelli MXD machines took to the grid, the red plate holder was absent, with official word then circulating that after this morning‰Ûªs qualifying crash that the championship leader was out of Round 8.

With Roberts declared unfit to race, the opportunity for the MXD title well and truly opened up, both Yamalube Yamaha Racing Team‰Ûªs Cody Dyce, and Isaac Ferguson mathematically capable of securing the championship, making the racing at Port Macquarie more exciting than ever.

When gates dropped on moto one, SD3 Husqvarna‰Ûªs Kaleb Barham shot off the start and secured the Raceline holeshot, but by the second turn, riders were down and both Raceline Pirelli KTM‰Ûªs Morgan Fogarty and Finn Laverty were left to remount their machines at the rear of the pack.

With a championship on the line, Dyce wasted no time in navigating his way through the field, slotting in to second behind Barham after only two laps on track, while behind him teammate Cooper Pozniak and KTM‰Ûªs Norton found their way to third and fourth positions.

With Dyce‰Ûªs closest points threat Ferguson back in 11th position by the six lap mark, the Yamaha rider simply needed to hold his position in order to clinch the Pirelli MXD championship in the opening moto, but with the mind of a racer, Dyce began to close in on Barham, setting up the last half of the race as a fight to the finish.

With only a few laps remaining, Dyce slipped back to third and allowed Pozniak to move up into second position, but regardless of the pass, the Yamalube Yamaha Racing Team rider was in the box seat to collect his first ever Pirelli MXD class championship.

And when the chequered flag flew, it was Barham who led from the gate drop to the finish line, collecting his first race win of the day, second place went to Pozniak, while despite finishing third in race one, Dyce did more then enough to become the 2017 Pirelli MXD Champion after a single race at Port Macquarie.

Fourth place in moto one went to KTM‰Ûªs Norton, followed by McKay, Dukes, Ellis, Watt, Dylan Wood and Ferguson who all completed the top ten. 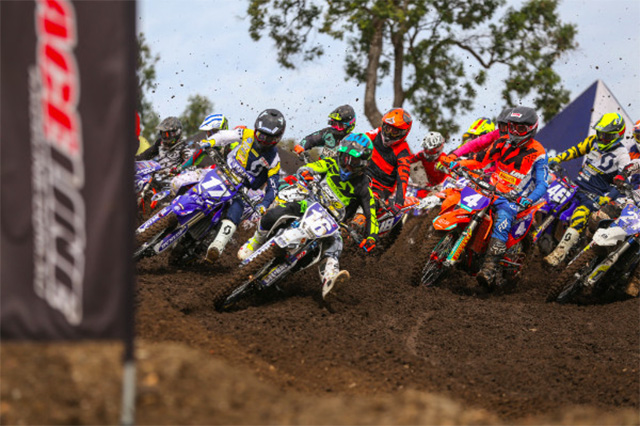 The Pirelli MXD class heads into the first corner for the final time in 2017. Photo: MXN IMages
Moto 2

With Dyce securing the Pirelli MXD title, and Roberts crowned runner up for 2017 after moto one, in race two it was the final spot in the championship that Ferguson, Pozniak and McKay were racing for.

When gates dropped for the final time in 2017, Pozniak snatched up the last Raceline holeshot, and Watt, Ferguson and Barham slotted in behind him.

Surprisingly it was a blessing that Dyce had wrapped up the championship early, because the Yamaha rider went down in the first turn, and was forced to re-join the competition in dead last with his goggles removed.

After taking the win in race one, Barham carried that confidence into moto two, passing Watt for second position after only two laps, but it was the steam train of Norton aboard KTM that soon captured the crowd‰Ûªs attention. The KTM rider shot from fifth up to second position in only just a few turns, relegating Barham‰Ûªs Husqvarna machine down a position.

With only 20 minutes on the clock in the final race of the day, Pozniak was determined to make use of the opportunity to snatch up the remaining championship points, and with the Yamaha rider continuing to lead by the halfway point, it was looking more and more likely that the youngster would finish on the Pirelli MXD podium for 2017.

Behind Pozniak, Norton who has claimed overall victories at the last two rounds looked comfortable in second position, while race one winner Barham followed in third. Dukes and McKay continued to hold down fourth and fifth, while Watt and local rider Hayden Matterson held positions inside the top ten.

As the Pirelli MXD class‰Ûªs last race of the season began to wrap up Norton moved into the lead position, and Pozniak dropped back to second. However with third place in the championship on his mind, McKay made his way into third, ensuring that the score men would be needing the calculator at the conclusion of today‰Ûªs racing.

When the points from both motos were calculated 2,2 finishes saw Pozniak finish the round on the top step of the podium, second place went to Norton, while Barham‰Ûªs consistency paid off, finishing in third. 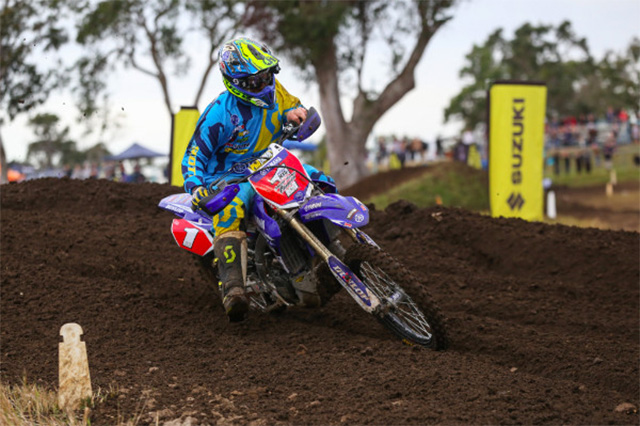 Cody Dyce ran his new number 1 plate in the final moto. Credit: MXN Images
But it was the championship podium that was the biggest celebration at the conclusion of today‰Ûªs racing, Dyce wrapping up his first ever Pirelli MXD Championship, runner up for 2017 was awarded to Husqvarna‰Ûªs Roberts, despite not racing at the final round, while Pozniak‰Ûªs impressive 2,2 finishes at Port Macquarie saw the Yamaha rider claim third overall in the Championship.

‰ÛÏIt was awesome to get the title in the first moto here at Port Macquarie ‰ÛÒ with Jy out, it was in the back of my mind, but I actually didn‰Ûªt know coming over the finish line that I‰Ûªd got it done,‰Û 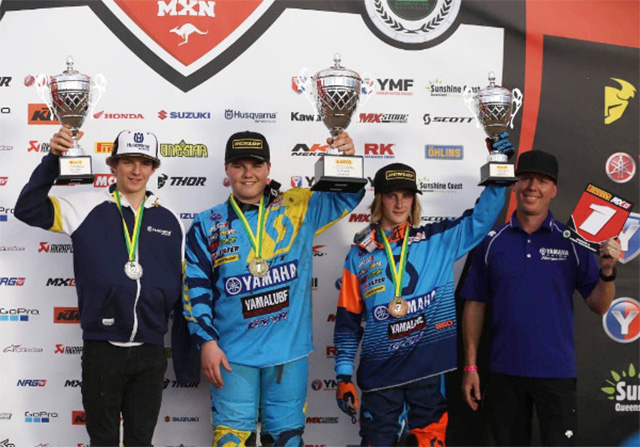 FULL RESULTS CAN BE FOUND HERE