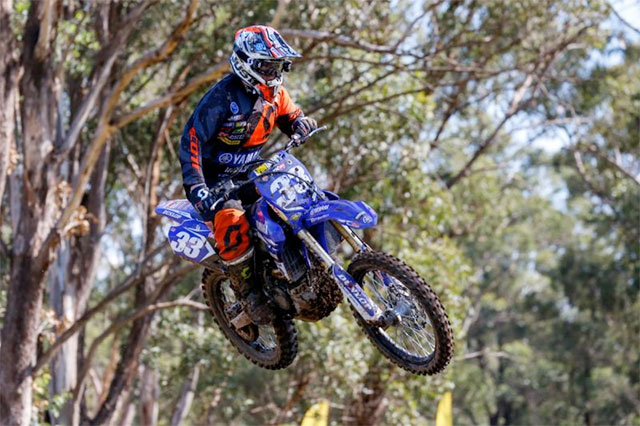 With racing commencing in perfect conditions, and finishing this afternoon with heavy rain, the Pirelli MXD class were forced to adapt on track today, but it was Dyce‰Ûªs consistency went it counted that paid dividends at the conclusion of the round.

This morning Husqvarna‰Ûªs Justin Hart surprised the competition with an impressive 1:48.894 lap time during qualifying ‰ÛÒ the fastest of the session and more than a second quicker than his competitors. KTM‰Ûªs Callum Norton and SD3 Husqvarna‰Ûªs Kaleb Barham were second and third quickest on track, while round one winner Cooper Pozniak (Yamalube Yamaha Racing) qualified in fifth. But despite absent from the top times in qualifying, it was Dyce who fought hard to finish on the podium this afternoon.

When race one got underway this morning it wasn‰Ûªt without carnage. Morgan Fogarty collected the Raceline holeshot but went down just a second later, handing the lead to fastest qualifier Hart. The drama on track didn‰Ûªt stop there, and only a few turns later red plate holder Pozniak went down hard, and was forced to re-join the race at the rear of the pack.

Unfortunately for Hart, he also lost the front of his number 27 machine in a rut and lost two positions on lap two, allowing Riley Dukes to inherit the lead while Norton slotted up in to second place.

Behind the top two riders, Hart maintained third position ahead of Jy Roberts and Yamalube Yamaha Racing‰Ûªs Dyce, while SD3 Husqvarna‰Ûªs Barham looked strong at the mid way point in the moto in sixth position.

Despite Dyce making his way up to fifth after a tough start, by lap nine the Yamaha rider had made a costly mistake seeing him slip back to seventh. Incredibly it was teammate Pozniak who put in one of the best rides so far this season, and by lap ten had fought his way back from 26th to inside the top five.

By the time riders received the last lap board Dukes looked ready to wrap up his first race win. Norton continued to look strong in third, followed by Hart, Roberts, and red plate holder Pozniak.

And it was in those positions that the Pirelli MXD riders finished ‰ÛÒ Husqvarna‰Ûªs Dukes collecting the moto victory from Norton (KTM), followed by Hart who crossed the line in third. Roberts and Pozniak concluded the Pirelli MXD class‰Ûªs first moto in fourth and fifth positions, while Barham, Dyce, Brodie Ellis, Isaac Ferguson and Jye Dickson rounded out the top ten.

Race two took place late this afternoon and despite the rain subsiding, the water had done the damage and the Pirelli MXD class was forced to contend with one of the most difficult circuits the MX Nationals had seen in years.

When gates dropped for the second time it was Dyce who secured the Raceline holeshot and moved in to the lead ‰ÛÒ doing his best to stay out of the carnage with riders going down left right and centre.

With Dyce through the mess the Yamaha rider checked out, and Isaac Ferguson (KTM) then slotted in to second position ahead of Pozniak in third. But just as Dyce had made up ground he lost it again, going down on lap two allowing Ferguson to close in on the MXD race leader.

The same fortune was also handed to Pozniak on the same lap, and despite holding third for the first two rotations, the Yamaha rider slipped back to fifth and was forced to make up time in order to protect his championship lead.

With the circuit testing even the most experienced riders in the premier class, the MXD competitors had their work cut out for them, and by the halfway point in the final moto Dyce continued to showcase plenty of maturity, leading from Roberts who had made the pass on Ferguson for second.

With only a handful of laps remaining, the running order saw Dyce out in front of Ferguson who had passed Roberts back once again. Fourth place was held by race one runner up Norton, while Raceline Pirelli KTM‰Ûªs Fogarty occupied fifth.

But it was Dyce who led race two from the gate drop all the way to the chequered flag. Second place was collected by Ferguson who held off Roberts in third. Fogarty and Pozniak wrapped up race two in fourth and fifth places respectively, while Norton, Bulk Nutrients Yamaha‰Ûªs Hugh McKay, Benjamin Broad, Alex Watt and Jai Constantinou completed the top ten.

When the points were tallied from both motos Dyce‰Ûªs 7,1 race results were enough to hand him the round two victory ‰ÛÒ his first of 2017. Second on the Pirelli MXD podium was taken by Jy Roberts, while Norton finished in third at Appin this afternoon.

‰ÛÏI managed to get the overall today by only one point! In the first race I got a seventh and in that last race I just did what I could to get the win,‰Û