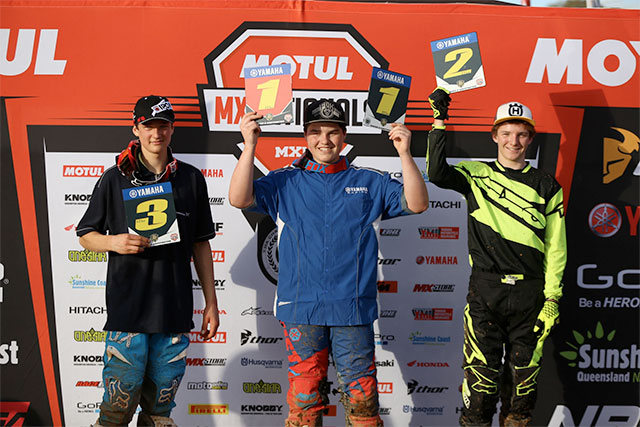 Yamaha Junior Racing‰Ûªs Cody Dyce dominated the Yamaha Rising Stars Rookies cup with a brilliant 1-1 performance over the weekend that ran in conjunction with Round eight of the MX Nationals in Shepparton, Victoria.

Dyce, mounted on a YZ125, worked hard for his win in race one after a wire to wire duel with Celeb Grothues. Dyce made his move into the lead on lap three but Grothues shadowed Dyce until the final stages of the race when the 15year old Victorian was able to move clear and take the race win.

Race two and Dyce was back a little from the start but it wasn‰Ûªt long before he charged his way to the front and rode off into the distance to take another race win.

The 1-1 result now sees Cody move to the top of the Rising Star Rookies score board with the final round to be ran at Coolum on August 30.

The win was also the perfect preparation for Dyce as he jets out next week to represent Australia at the World Junior Motocross Championships in Russia.

‰ÛÏThat was a tough track to ride and I haven‰Ûªt been on something as rutted as that before,‰Û