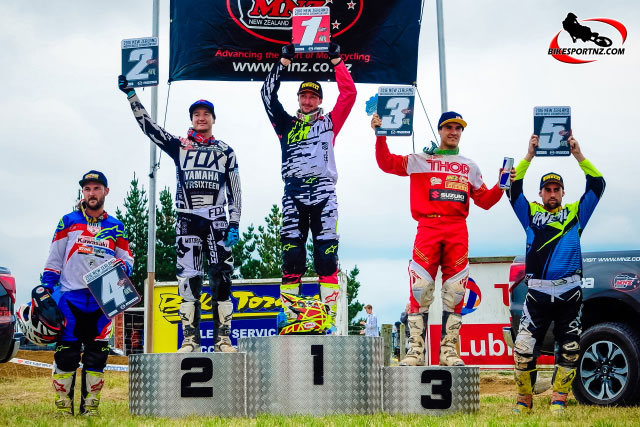 The 32-year-old from Mount Maunganui successfully defended his MX1 crown at the fourth and final round of the New Zealand Motocross Championships at the Digger McEwen Motorcycle Park facility on Sunday, brilliantly fending off stern challenges from two Australian riders, both of whom were former Grand Prix stars in Europe, and a slew of very fast fellow Kiwis as well.

Cooper (Honda) started the day just three points in front of Gold Coast rider Todd Waters (Suzuki) and five ahead of Kyogle's Dean Ferris (Yamaha), the two Australians who had threatened most to end Cooper's three-year reign as New Zealand's No.1 motocross racer.

Fourth best in the points at the start of Sunday was Queenstown's Scott Columb, (Kawasaki), with Taupo's Brad Groombridge (Suzuki) rounding out the top five.

Only the two visiting Australians had a realistic chance of overcoming Cooper and it was these three riders who again dominated proceedings at Taupo on Sunday.

When Ferris won the first of three MX1 races on Sunday, the dynamics had changed remarkably and Ferris had gone from third, and five points adrift of Cooper, to second and just two points behind.

When Cooper won race two from Ferris, with Waters again finishing third, the Kiwi hero had snatched back the initiative and restored his advantage to five points.

That made the mathematics painfully simple: Even if Ferris won the third and final race of the day, second place would be enough for Cooper to keep his crown for a fourth consecutive season.

And that's exactly how it panned out, Ferris winning comfortably while Cooper cruised home in second, all the time watching over his shoulder for a late charge and "spoiling" attack from Waters.

The threat from Waters never came and it was a calm and relaxed Cooper who crossed the finish line second and sealed up the title again.

"The second race win today is what won the title for me and I got the job done," said Cooper. "It gave me the five-point buffer I needed. It was a battle though. Dean (Ferris) passed me in that race and I had to fight back."

The other two championship classes were a little more cut and dried.

In the MX2 (250cc) class, Takaka's Hamish Harwood (KTM) started the day with a 13-point lead over his nearest rival, Australian Jed Beaton (Yamaha), and, in the 125cc class, Ngatea's Ben Broad (KTM) was 23 points ahead of his closest threat, Taupo's Wyatt Chase (Yamaha).

Both Harwood and Broad prevailed on Sunday with solid, sensible riding and claimed their respective titles.

For Full Round Results - CILCK HERE