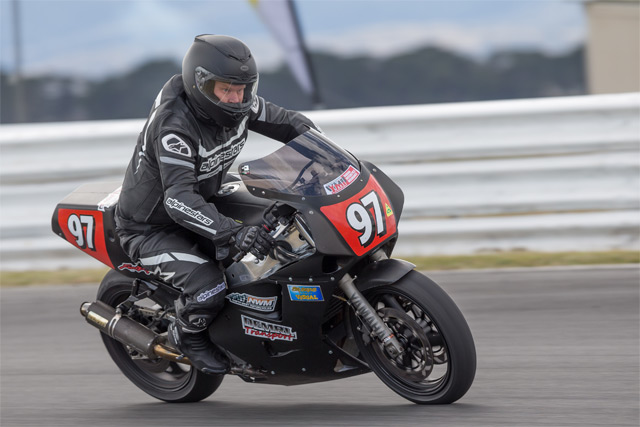 There was a great feeling of local flavor as the Period 5/6 and Formula 3 Club Classes took to the circuit at the fourth round of the 2015 Yamaha Motor Finance Australian Superbike Championship presented by Motul Pirelli.

Tasmanians filled the grids as both Dave McCullagh (DEMRL Transport) in the Period 5/6 and Will Swan in Forumla 3 walked away with weekend wins.

The opening race for the category took place on Saturday at Symmons Plains, where McCullagh rode his Yamaha to a comfortable race win.

McCullagh finished the eight-lap race more than 27 seconds ahead of Suzuki rider Peter Cameron (Multiskilled Engineering), with Paul Smith a further 11.401 seconds behind in third.

Scott Campbell - son of Tasmanian legend Mal Campbell registered a DNF for the race when he jammed his gear lever, effectively ending his weekend.

The second race of the meeting was the opening race on the schedule on Sunday, and it was again McCullagh who took an early race lead.

He was in fact nine seconds clear of Bellchambers in second by the end of the second lap ‰ÛÒ posting faster times than he put in on Saturday.

The race was then a formality with McCullagh making it two on the trot ‰ÛÒ finishing 28.143 seconds ahead of Bellchambers, while Smith claimed third place.

McCullagh again showed his dominance out on the track, when he won the third race of the event by 29.748 seconds to make it a clean sweep.

Belchambers again finished the race in second spot, with Smith in third and Webb finishing fourth.

And the result of the third race is exactly how the riders finished in the overall result ‰ÛÒ McCullagh enjoying the perfect weekend with the outright win.

Fourteen bikes took to the grid for the opening race of the Formula 3 class on Saturday, and through eight laps it was Will Swan who piloted his Aprilia to the race win.

The battle for second and third was epic ‰ÛÒ with Craig Johnston finishing .030 of a second in frond of Andrew Blackberry (Engineering Solutions Tasmania) as the pair rounded out the podium.

Tony Oliver and Boyd Witzerman rounded out the top five.

In the second race Blackberry looked to put some mechanical issues from race one behind him as he shot to an early race lead.

But he was perhaps a little too keen ‰ÛÒ despite being in front for the whole race and passing the finish line in first, Blackberry was given a 10-second penalty for a jump start.

That allowed Swann to move up from second and claim his second race win in the class, while Cody Travers also was a beneficiary from the penalty moving into second.

Blackberry was forced to settle for third spot from Craig Johnston and Oliver ‰ÛÒ who also received a penalty off the start line.

In the last race for the class it was Blackberry who finally managed to pull everything together ‰ÛÒ dominating from start to finish to take the race win.

Blackberry finished 10.553 seconds ahead of Swann, Travers ended the race in third with Oliver and Johnston finishing fourth and fifth respectively.

The results meant that Swann finished the event in first overall, Blackberry claimed second outright and Johnston ended the day in third.