Clement Desalle back in the top ten 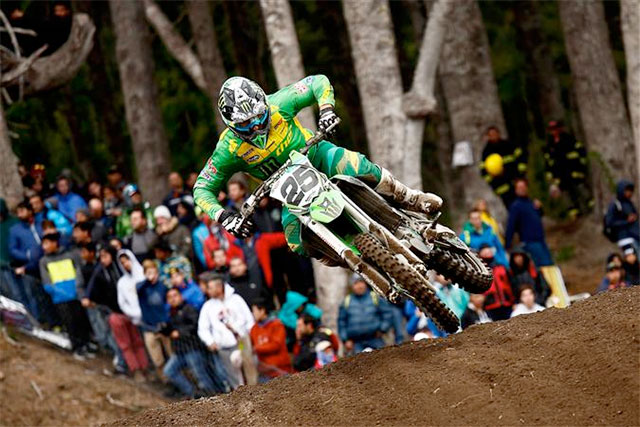 Clement Desalle raced the Monster Energy Kawasaki Racing Team KX450-SR back into the FIM World MXGP Motocross Championship top ten at Neuquen/Argentina as he recovers from his early season injuries.

The Belgian, who has bravely defied the pain of a fractured forearm through the first three rounds of the world championship, displayed great speed during the practice sessions as he consistently posted top six laps, and he continued this form through the early laps of both GP motos as he confidently held down fourth and seventh places during the first laps of the two races.

Inevitably the shortage of bike time was to take it toll during the closing laps of each race and Clement sensibly slowed his pace to finish an injury-free seventh and eleventh. This gave him tenth overall on the day and has lifted him to fifteenth in the series standings.

"I had some good lap times in the practice session, but in the qualifying race Bobryshev crashed just in front of me and I couldn‰Ûªt avoid him; I had to come back from last to ninth," Desalle explained.

"Today I had a good start in the first race and was in the top five, but after fifteen minutes I could feel the effect of not being able to ride my bike so much since my accident and I had to slow down. I finished seventh; for sure I‰Ûªd like better results but I don‰Ûªt want to take stupid risks as I‰Ûªm still recovering.

"The second race was similar with a good rhythm in the first laps, but then I lost some positions. I know that soon I will be able to train normally; for sure it‰Ûªs always difficult to wait as I want to win races and score podiums.‰Û