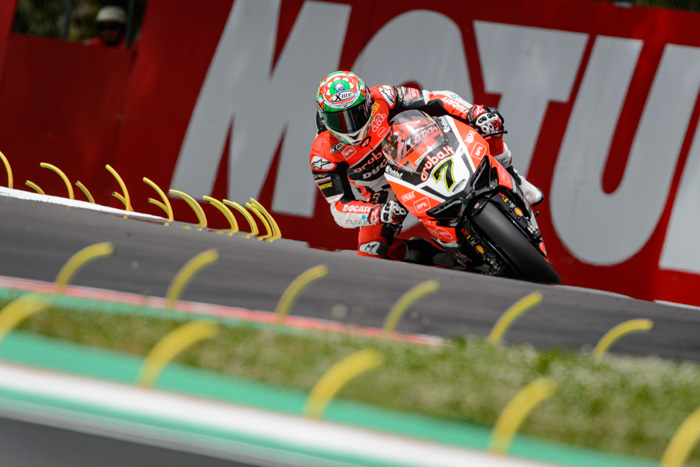 The Aruba.it Racing - Ducati team enjoyed an unforgettable weekend in Imola as Chaz Davies raced to a double round win.

After taking the Panigale R to a historic first win on Italian soil in Race 1, Chaz Davies did the double in Race 2. The Welshman‰Ûªs tally also includes Superpole and the fastest lap in both races.

Thanks to another ‰Û÷holeshot‰Ûª at the start, Davies managed to impose his rhythm and quickly pulled away from the rest of the field, posting the race‰Ûªs fastest lap with a 1:42.240 in lap 6 and then increasing his lead to five seconds, a margin he administered until the finish line, preceding Jonathan Rea and Tom Sykes.

‰ÛÏIt‰Ûªs just been an incredible week-end, from start to finish." Davies admitted. "The latest upgrades Ducati brought for the Panigale R in Aragon allowed us to compete for the win in each race. To seize a victory here in Imola, Ducati‰Ûªs backyard, is special.

"To do a double, is unbelievable. Today the conditions were different, but we were able to create a gap since the first few laps. I made a couple of mistakes in lap 9 that made me lose a second, but also helped me stay focused until the checkered flag. We head to Sepang with confidence, as we have a more competitive package than last year, when we still left Malaysia with a second place and a win.

"Our goal is to keep the momentum and further cut the gap in the championship.‰Û 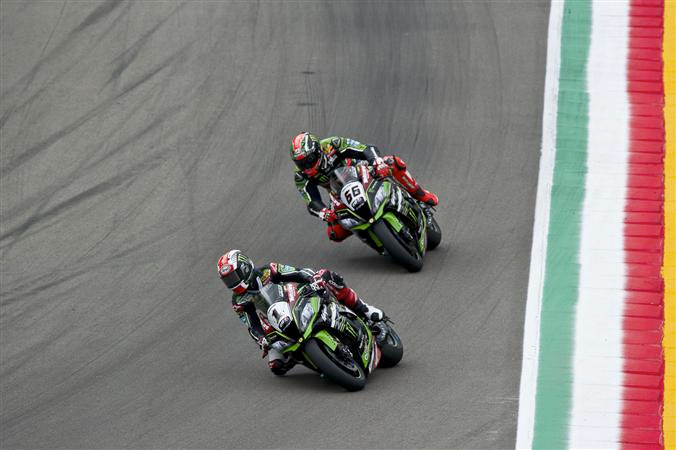 Both KRT Riders On The Imola WorldSBK Podium Again

Jonathan Rea and his KRT team-mate Tom Sykes stood on the podium for the second time in two days at Imola, with Rea once more second and Sykes again a close third on their all-new Ninja ZX-10Rs. Jonathan now has a championship lead of 35 points

‰ÛÏChaz made a very good first lap and broke me a little bit but then I felt like I was managing the same pace and maybe even faster." Rea reflected. "Then I had a huge moment on the exit of the last chicane. I ran onto the Astroturf, which had held moisture from last night‰Ûªs rain.

"A few laps later, when I was in fifth gear and on full gas, my bike just cut out on the straight. I lost two or three seconds in one lap. It fired into life again but it took me a few corners to relax again. It feels like when we can‰Ûªt win we should finish second and we did that at Imola.

"It is clear now that there are three guys now at the top of the championship. Every dog has his day and today was not ours.‰Û 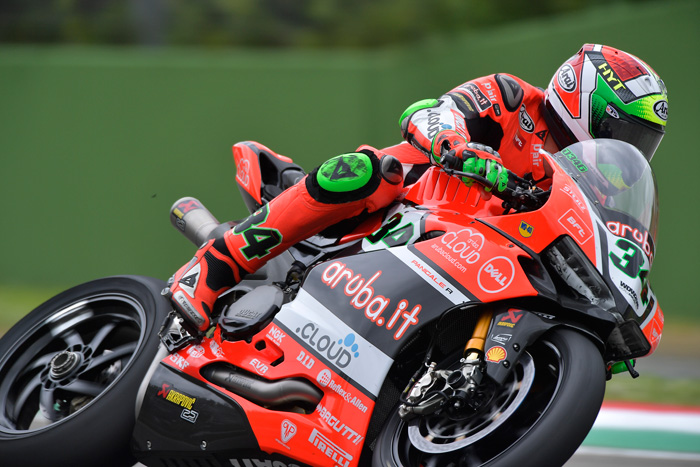 Davide Giugliano who finished fifth in Race 1, showed a strong progression with a pace worthy of the podium. Some difficulties in the early laps prevented him from fighting with the factory Kawasakis, but two top-five finishes give the Italian confidence ahead of the next races.

‰ÛÏToday we made another step forward with the setup and I probably could have fought for the podium as my pace was similar to Sykes‰Ûª, but I struggled early on to warm up the rear tyre." Giugliano commented. "Compared with the last couple of races, this round has definitely been positive, with two top-five finishes that give me a confidence boost to get back on the right track.

"I want to give my special thanks to the many Ducati fans who showed an incredible warmth despite our recent struggles. Sepang will be another tough battle, both because of the climate and the layout, but we‰Ûªre not holding back.‰Û 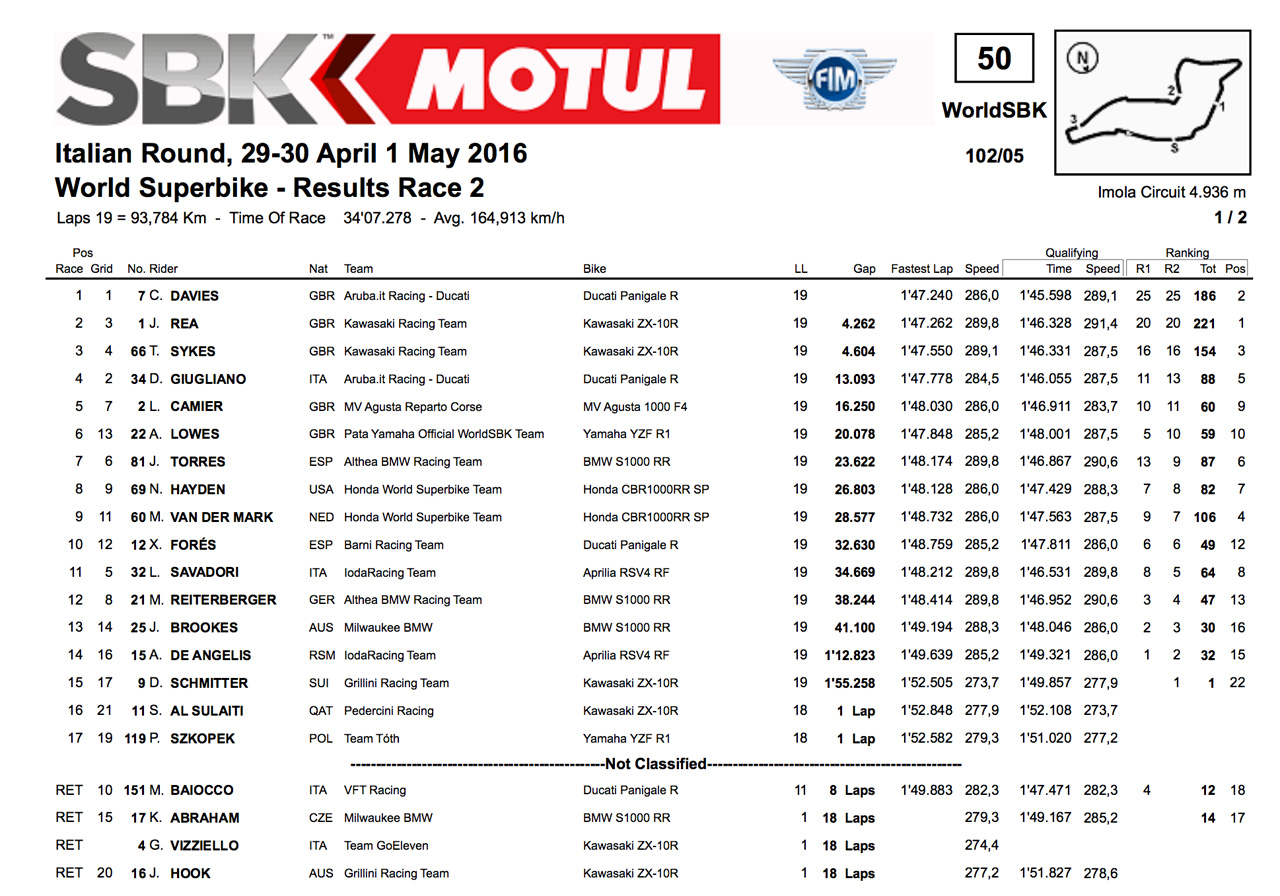 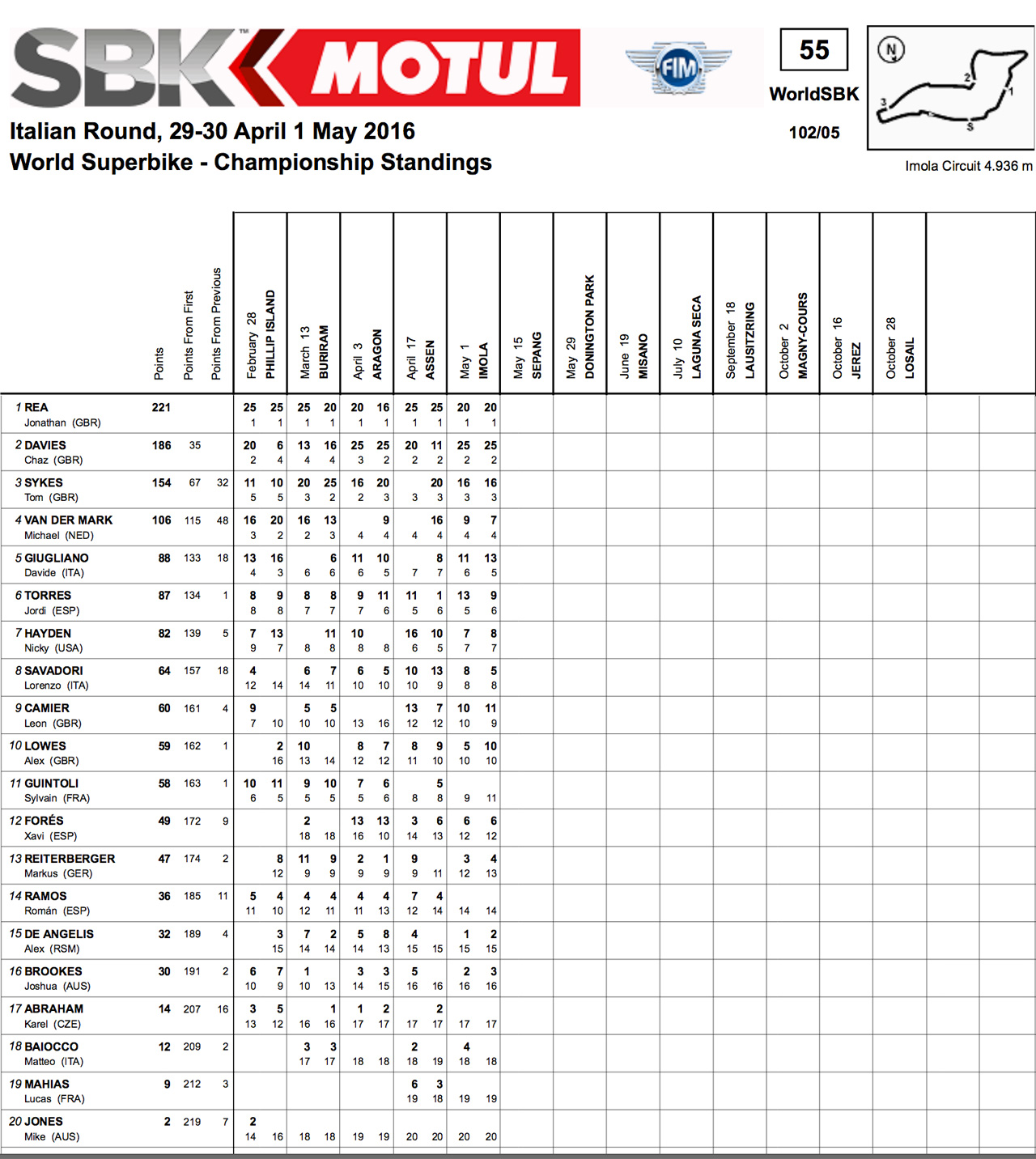