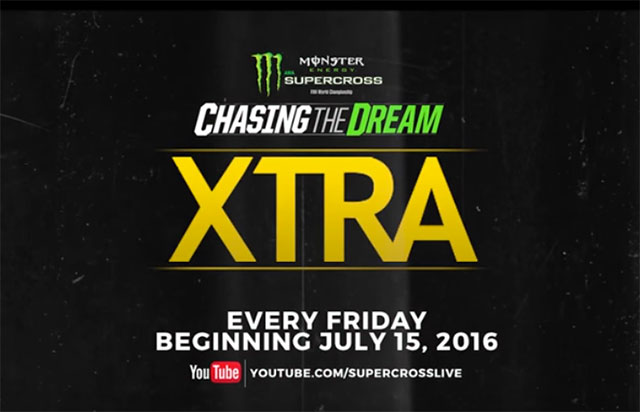 Feld Entertainment announced today they will begin digital distribution of a series of videos titled Chasing the Dream - Xtra. As the name aptly implies, the webisodes were produced using extra footage shot during the filming of the Chasing the Dream television series.

The first webisode will go live on Friday, July 15 (USA) via the Monster Energy AMA Supercross, an FIM World Championship, YouTube channel and will feature the epic battle between Ryan Dungey and Ken Roczen in Indianapolis.

Chasing the Dream is an unscripted, all-access, behind-the-scenes look at the key personalities that make up the world's most intense and physically demanding off-road motorcycle championship. In the first season of Chasing the Dream, the series was acclaimed for its raw and powerful story-telling and was broadcast exclusively on FS1 during the 2016 Monster Energy Supercross season.

Chasing the Dream was produced in-house by Feld Entertainment and the producers were so enamored with the amazing footage they felt compelled to produce a digital series of never-before-seen footage combined with a more in-depth look at key moments throughout the season.

"Fans of Monster Energy Supercross' Chasing the Dream are really going to enjoy what we have in store as this web series takes viewers beyond the race track and highlights pivotal moments that happened during the Monster Energy Supercross season," said Michael Prince, Vice President of Television, Feld Entertainment, Inc. "I'm very excited about Chasing the Dream - Xtra as it dives deeper into the drama and intrigue surrounding each rider's race to the championship."

The Chasing the Dream - Xtra series will feature a new video vignette every Friday throughout the summer. Subsequent webisodes are slated to highlight Yamalube/Star Racing Yamaha's Aaron Plessinger in St. Louis after his first win of the season in Indianapolis, Red Bull KTM's Marvin Musquin as he prepares for the Main Event in Detroit, plus a rare glimpse of Dungey and Monster Energy/360fly/Chaparral/Yamaha Factory Racing's Chad Reed as the lights dim during opening ceremonies at Ford Field in Detroit. Chasing the Dream - Xtra can be found exclusively on the Monster Energy Supercross YouTube channel - www.youtube.com/supercrosslive.