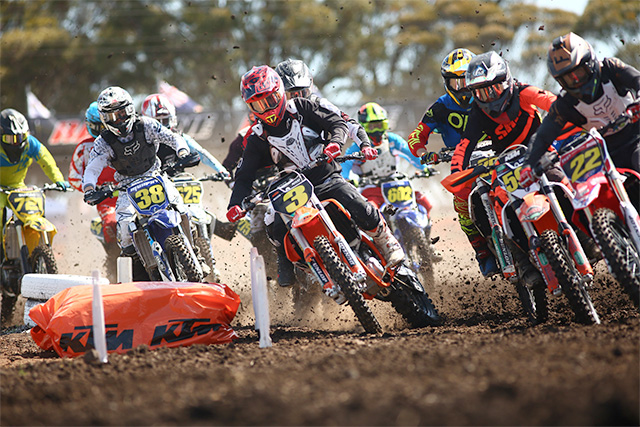 The KTM Junior Motocross Racing Team has just wrapped up a successful week at the KTM Australian Junior Motocross Championship (AJMX) in Horsham, Victoria, concluding the six-day event with two national titles to its credit.

Victorian talent Mason Semmens was crowned champion in the 125cc 15 Years category with four out five race victories to his name, stamping his authority aboard the KTM 125 SX.

Taking on double-duties in the week-long affair, the cards just didn‰Ûªt fall Semmens‰Ûª way in the Junior Lites 15 Years class, who after dominating his three heats, suffered a cruel DNF in the opening final when he was involved in a nasty first turn incident, sidelining him for the outing. Despite being out of title contention, the teenager returned to the field, lodging 6-4 moto results for 11th overall.

"It was an awesome week, it started off really well - I qualified fastest on both bikes and won all my heat races on my 250, and won my first three finals on the 125," Semmens recalled.

"In the first final on the 250 is where it went a bit pear-shaped, another rider came into me and I think his foot-peg went into my front wheel and ripped all the spokes out, so that sent me into the ground and I couldn‰Ûªt finish that race. I was pretty sore after that crash and to forget about it and move on, I was leading the 125 championship by 11 points at that stage, and then in the fourth final I got fourth, so I had a four-point lead going into the last one. At worst, I had to get second if Bailey Malkiewicz won, and I came out and won that race and wrapped up the 125 championship.

"It was awesome to have the team there, Kyle Blunden did an awesome job making sure everyone was comfortable and had everything they needed. To have the truck there for us to pit under and the support, it‰Ûªs just awesome," Semmens concluded. 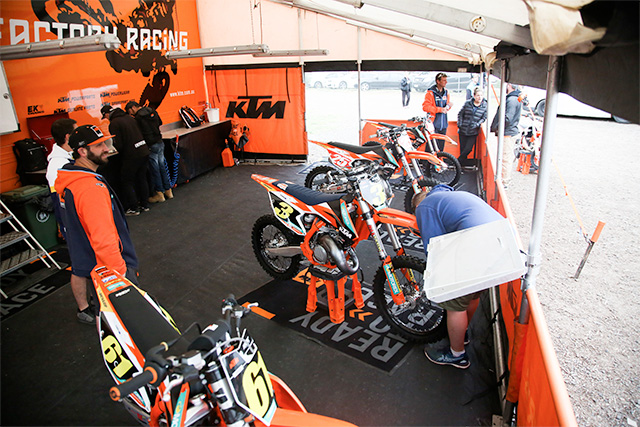 KTM had plenty of support on hand for their junior team.
Regan Duffy of Western Australia pushed through what was one of the most challenging weeks of his youthful career after experiencing limited bike time in the lead-up due to a wrist injury sustained five weeks prior, which was only increased when he was struck down with an illness.

However he charged through the adversity, clinching the 125cc 13-U15 Years crown in what was a tense fight for the title, edging out Estonian Meico Vettik by just one point after recording a 1-7-1 scorecard. His week didn‰Ûªt quite go as planned in the Junior Lites 13-U15 Years division, piloting the KTM 250 SX-F to seventh overall.

"It was pretty tough, I hurt myself five weeks earlier at Coolum and only rode a couple of times in a flat paddock before it," Duffy explained. "Then I fell ill two days before the event started, I actually had to pull out of one day because I was so sick that couldn‰Ûªt ride, then I ended up winning.

"I wasn‰Ûªt too sure if I could get the 125 title, Meico Vettik who was leading had gone 2-1 and I was 1-7, so I just went into the final race with the mindset of doing my best. I got lucky that he had a bad final moto, I wasn‰Ûªt sure what to believe when I found out I won it - 1-7-1 is a crazy scorecard to win it. I was pretty stoked really. It looked like it was going to be a really bad week for me, but yeah, that cheered me up a bit." 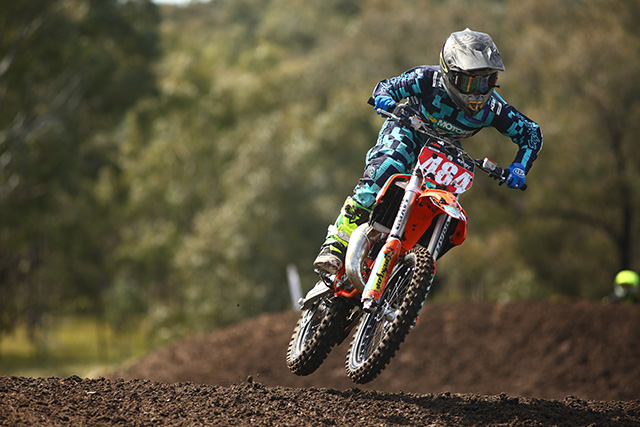 Blake Fox
New South Welshman Blake Fox also took on dual classes throughout the duration of the event, contesting the 125cc 13-U15 Years and Mini Lites 12-U14 Years categories. In the 125cc class, he raced to a 13-17-10 scorecard, positioning him ninth in the overall standings, while aboard his KTM 85 SX, he was third overall after lodging 2-4-4 results - crossing the line first in the final outing, however being docked three positions due to jumping on a yellow flag.

"It was pretty good and a long week, we had a few ups and downs, but in the end I felt pretty good with my riding," Fox said. "It was the first time I‰Ûªve raced both classes, I certainly got a little more tired towards the end of the week, but with track time and everything, it was pretty good. I didn‰Ûªt meet my expectations so much with positions, more so with how I was riding - I was definitely where i thought I would be, but position wise, it wasn‰Ûªt the best after a couple of downfalls, but it was still pretty good."

Young Queenslander Deegan Mancinelli entered the sole category in Mini Lites 12-U14 Years alongside teammate Fox, displaying progressive results throughout the three motos to go 12-6-5 for sixth overall in the championship standings.

"I didn‰Ûªt go too bad in the first moto, I got a bad start and made a few too many mistakes, but in the last two motos I rode a lot better," Mancinelli explained, "I really like how the track was rough, it‰Ûªs what we train on at home, so I liked it more towards the end of the week. It was a really good experience being there with the KTM, I think it was really good being for everyone and it gave me a lot more confidence. Overall, I was hoping to do a bit better, but it was pretty good considering I just came back"

Tam Paul - KTM Australia Brand Manager, was happy with how the Orange crew faired over the week long event.

"It was a fairly successful week. We had two championships in the older classes out of our four team riders and a couple of other podiums. All in all, it was a pretty good week - we always aspire to win as much as we can," Paul reflected.

"We‰Ûªve had some years where we‰Ûªve dominated and other years where they‰Ûªre hard to come by. Regan broke his arm at the last round of MX Nationals Rookies at Coolum where he clinched the championship, he was off the bike for five weeks and wasn‰Ûªt going to race at Horsham, but got clearance a couple of days before and did some work in a paddock. He then got a really bad flu and couldn‰Ûªt ride one of the days, he was up against it the whole time and under done and under prepared. He managed to pull it out in the 125s somehow, a few things went his way - he also won two motos and had a big crash trying to pass Meico Vettik - that was crazy. It was quite miraculous for him to win that and we‰Ûªre very proud of him.

"I couldn‰Ûªt be more proud of Mason, he‰Ûªs been on the team for four years, his first couple of years were pretty lean to be honest and then last year he did the double. This year he dominated all week, only to have a massive crash at the first turn of the first 250 final. To bounce back from that and claim the 125 title was really good and a great way for him to finish his junior career with KTM.

"Blake went 2-4-1 in his motos, but in the final one he got a penalty for jumping on a yellow, which put him back to fourth. I‰Ûªm really happy for Blake as well, he‰Ûªs new to the team and I think in the next few years it‰Ûªs going to be really exciting for him and he‰Ûªs the whole package. He‰Ûªs very smart, well presented and has a great family - he cycled his pushbike to the track everyday, so that shows you where he‰Ûªs at.

"Deegan Mancinelli was very impressive as well, he‰Ûªs really young and it‰Ûªs his first year on the team. He was probably a bit overwhelmed by the whole set-up that we had there, it‰Ûªs a fairly big deal for that event. He rode really well, he had a tough first moto, but bounced backed for two really good motos - it really showed how good he can ride. I think if he got a few good starts, he would‰Ûªve really been in that podium mix. I think next year will be his year as well as Foxy," Paul concluded.