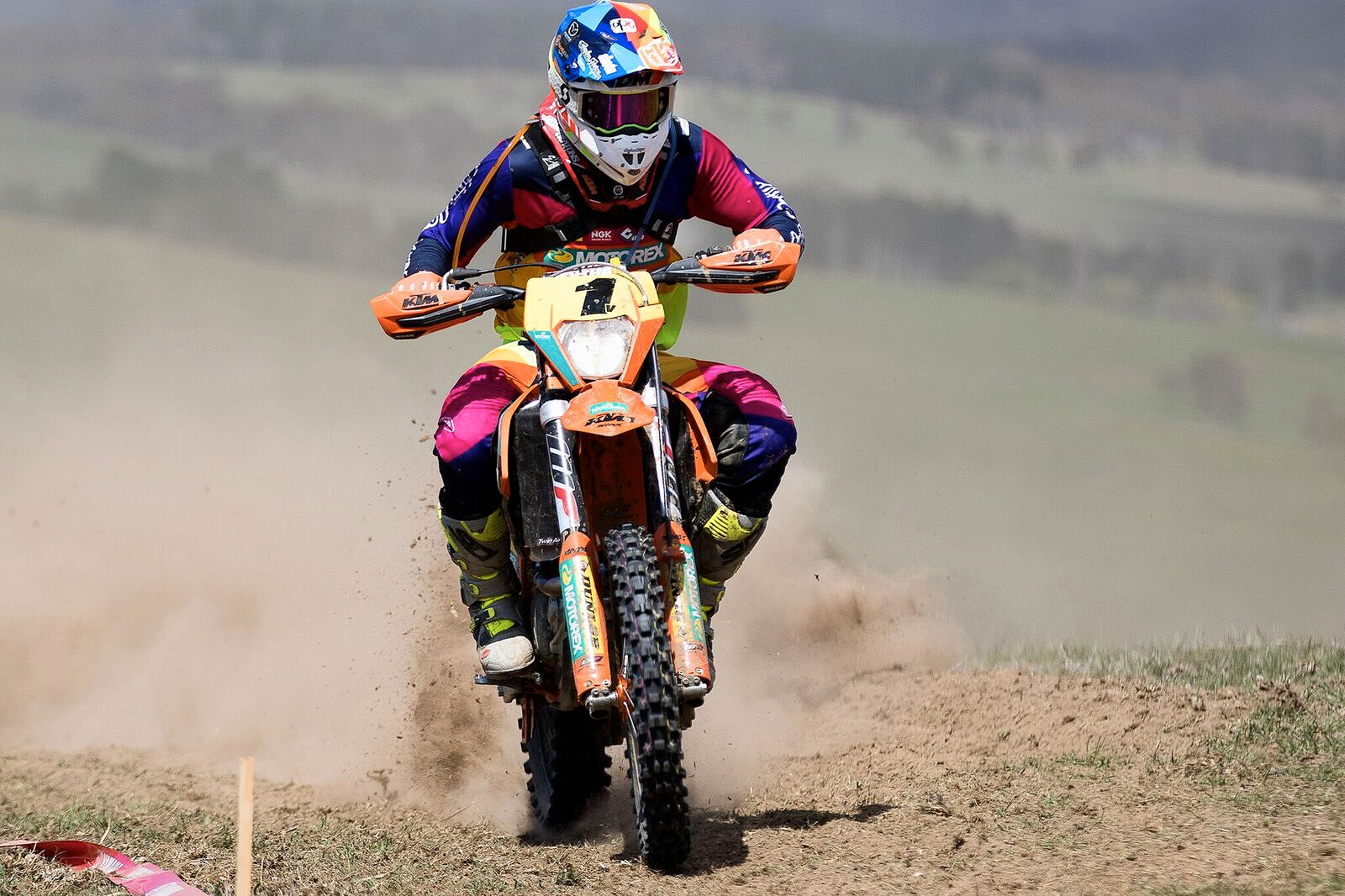 Set atop the picturesque alpine township of Omeo in Victoria, scores of spectators were treated to a spectacular cross-country battle between Australia‰Ûªs best Enduro competitors who provided ample excitement and palpable competition.

Korey McMahon clinch the 2018 J4 title with a second-place finish. Blake Hollis has taken out the J3 title as his rivals both had troublesome races.

A gruelling two hour faced the Junior riders with the sun beaming down it was certainly a battle of fitness around the flowy track. In the J4 class it was Kyron Bacon who led from start to finish on his Honda, making the two-hour cross country look simple as he crossed the line.

Sam Barton was the fastest rider in the J3 class to claim his first win of the season and in the J2 class it was Max Phillips grabbing the win.

E3
The man who has been uneatable all season was once again Milner, as he took the win in style here at Omeo, Vic in today‰Ûªs cross country. After a tough start that saw Milner just keep the bike on two wheels, he quickly regained himself and set off to catch the lead group. It didn‰Ûªt take long with Milner making a move on Lachlan Stanford on the last turn of the first lap to take the lead.

As usual he didn‰Ûªt look back from there and coasted to victory with his time of 2:55:17.670, handing him the E3 title and now he has completed the triple crown (A title in E1, E2 and E3 classes).

Milner was stoked with today‰Ûªs results; ‰ÛÏThis feels pretty good, well let‰Ûªs say it‰Ûªs definitely good! I‰Ûªve never had to opportunity to ride the E3 bike and to have that chance and to win the title, I‰Ûªm stoked. The bike has been unreal all year and the best part is that I‰Ûªve had so much fun this year and to achieve this just makes it all the better as well.Taking this win in another cross country after the Hattah mishap makes todays win even better and cross-country riding is something I‰Ûªve focused on since return from the GNCC, really winning cross countries is my biggest goal,‰Û 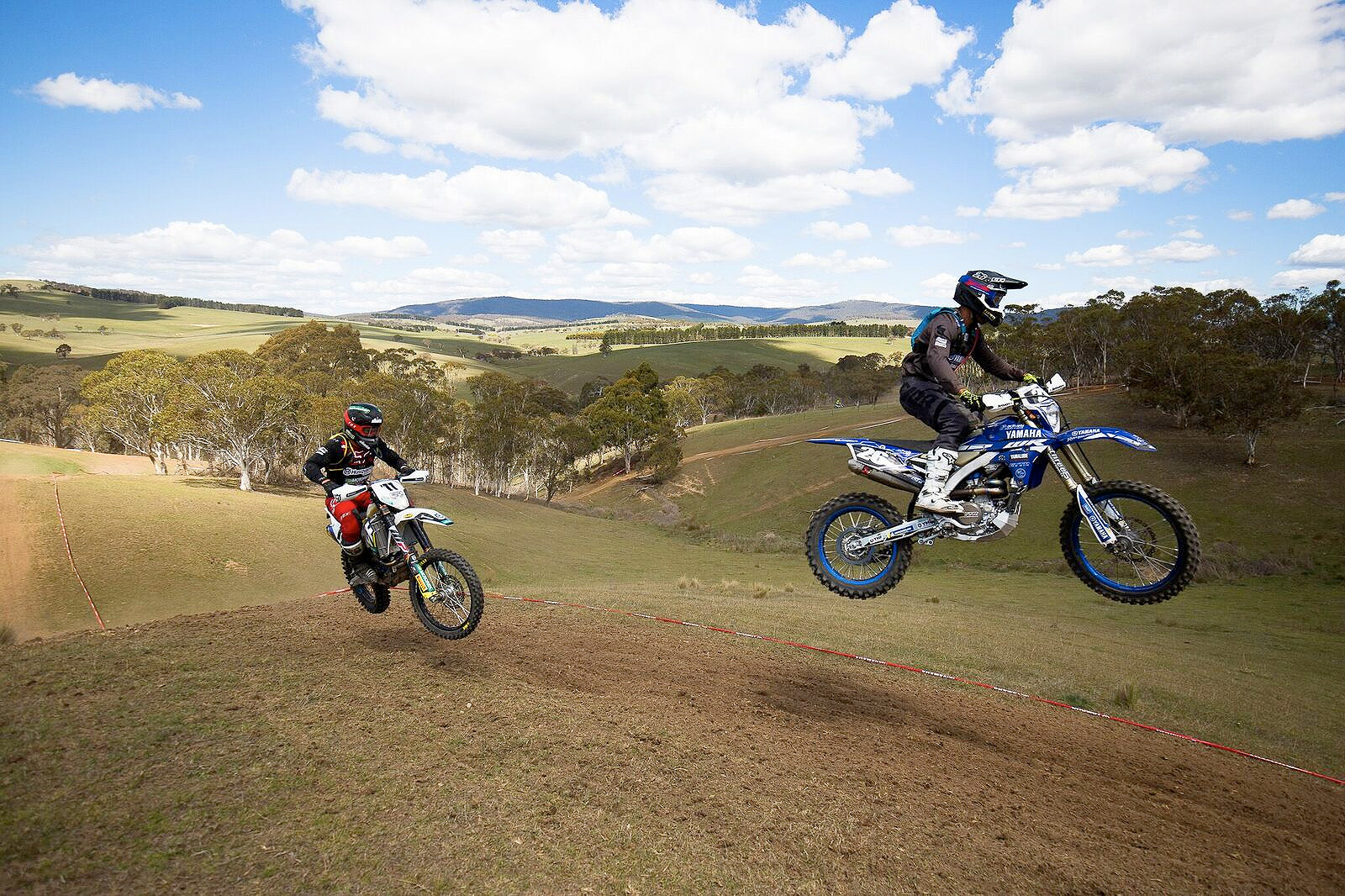 Daniel Sanders (11) and Yamaha's Luke Styke where crowned E2 and E1 champions respectively. Photo: John Pearson Media
E2
What a year it has been after returning from Enduro GP for Daniel Sanders, he has comeback and looked like her never left taking win number ten for the season on his way to the 2018 E2 title.

Sanders would once again do things the hard way after a big fall on the opening lap saw him lose his helmet visor, but they didn‰Ûªt stop the Victorian. Sanders regained his composure and put his head down and charged. His efforts pushed himself over the line in a time of 2:55:43.427.

The E2 Champion shared; ‰ÛÏIts so good to wrap it up in my home state of Victoria, and aswell finishing with cross country its like you have won a race and you get to celebrate it with the team. I had a massive crash on the first lap and went flying over the bars and lucky my fox helmet saved me once again. To come back and enjoy racing and give 100% makes this so much more enjoyable and a big thank you to the Husqvarna team for everything they do,‰Û 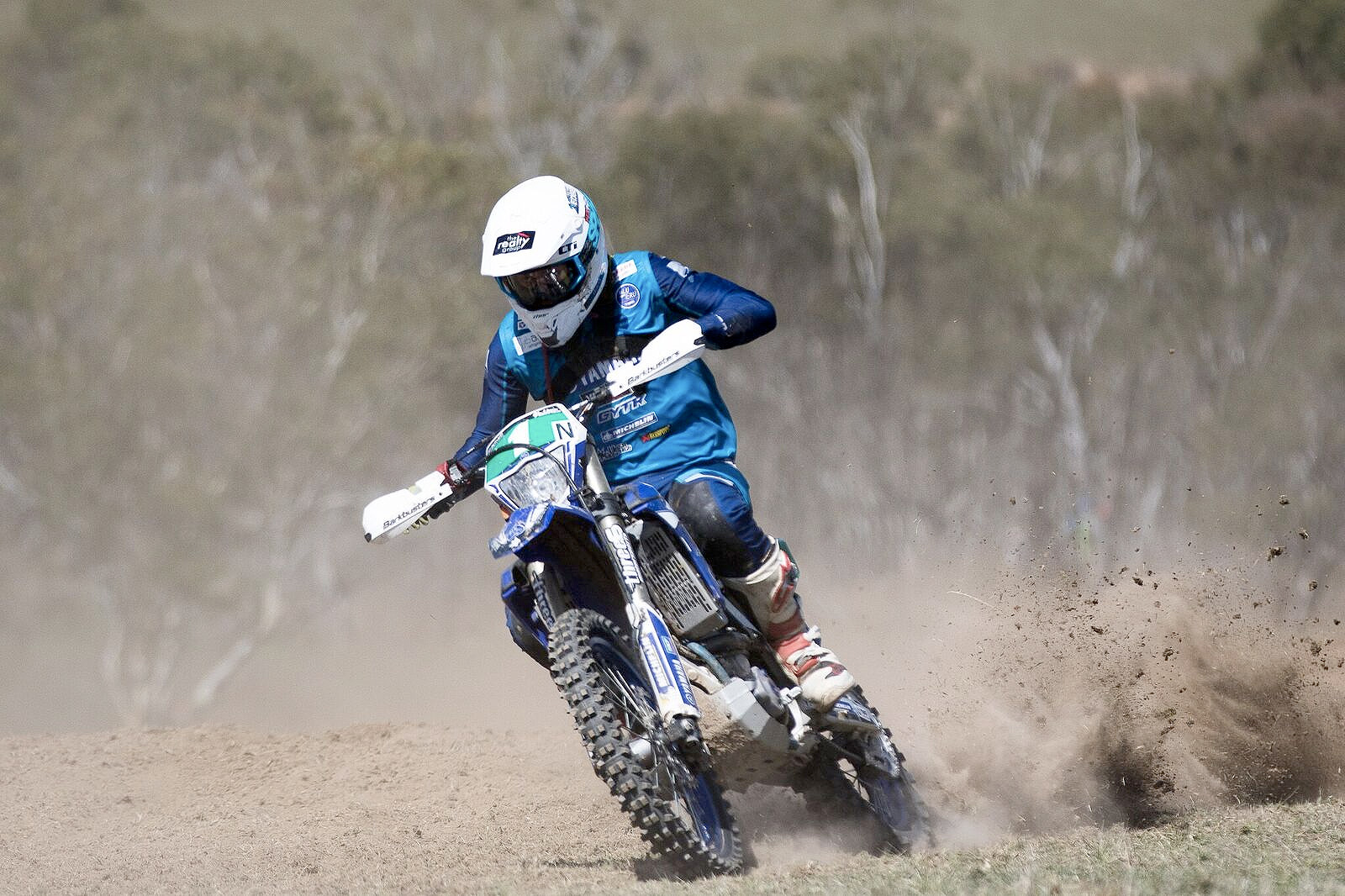 Michael Driscoll took out the EJ class. Photo: John Pearson Media
EJ
The EJ class has been all about Michael Driscoll this season as the Yamaha rider collected his tenth with from as many starts, taking out the EJ championship for season 2018. Driscoll made it back to back EJ titles with today‰Ûªs win, his time of 3:08:22.069 was enough to secure win number ten.

Driscoll was lost for words with another EJ championship; ‰ÛÏI actually can‰Ûªt describe this right now, I think tomorrow it will sink in a little bit more, but the feeling is unbelievable right now. Today didn‰Ûªt quite go to plan off the bat, I got a poor start and had to eat a lot of dust, but I worked my way to the front and then with two laps to go I knew the win was insight,‰Û 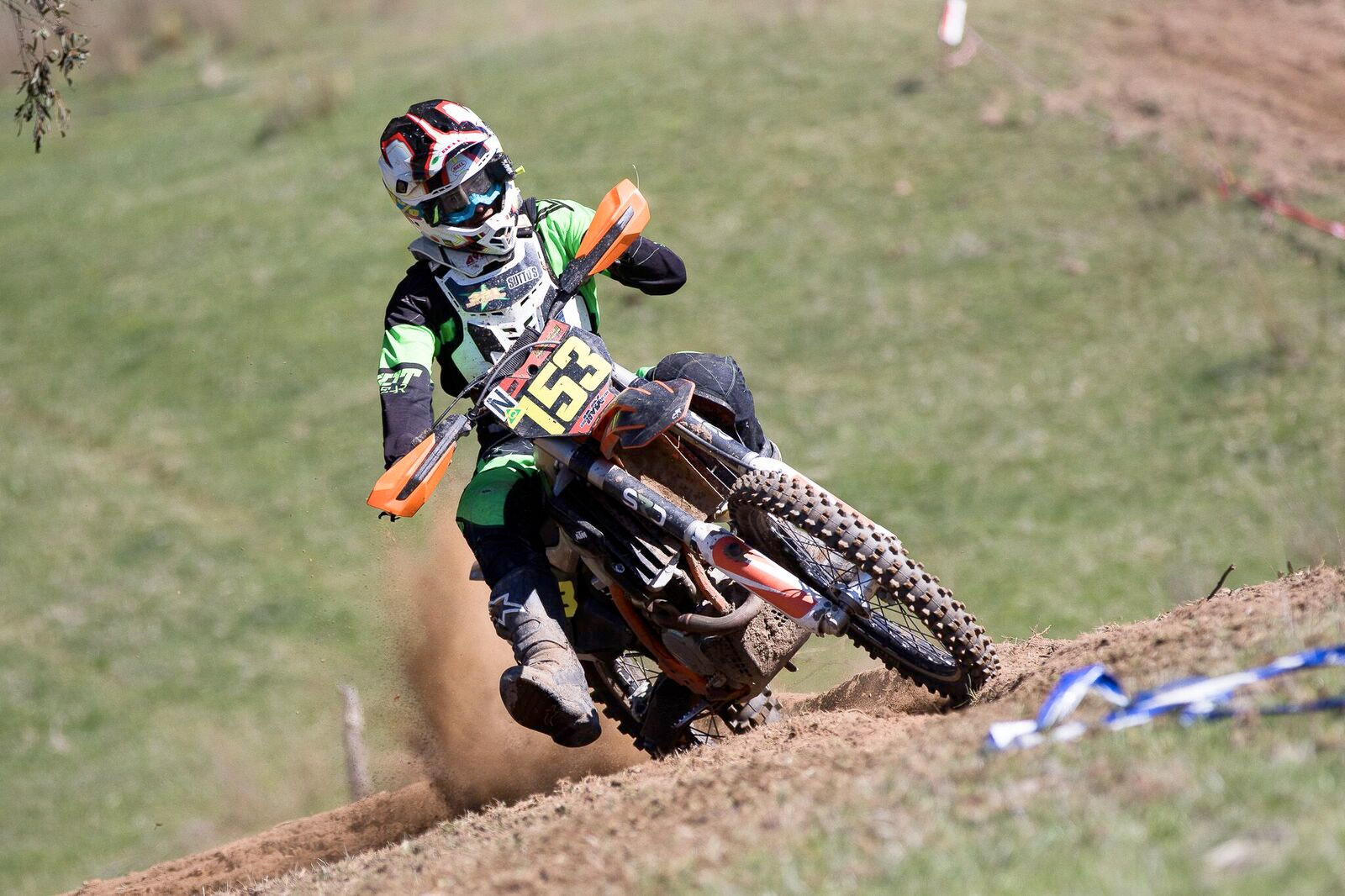 All eyes at the start of the cross country were on both Bacon and McMahon as the title could be decided today. Bacon knew he had to win, and McMahon knew a finish in the top three would hand him the title. The race got off to the perfect start for Bacon as he got out of the tight first turn in the lead. From there it was all about consistent lap times and that's exactly what the Honda rider did, ending the race with a time of 1:55:29.913.

With Bacon clearing off out in front early McMahon took his foot off the gas and steered himself home to second and the title, with his effort of 1:58:12.917.

Rounding out the podium was Matthew Pye on his Husqvarna who battled hard with Raife Dooley through stages of the XC, before pulling away to end the race with his time of 1:59.31.108.

Just missing the podium was Dooley with the KTM rider registering a time of 2:00:38.517. 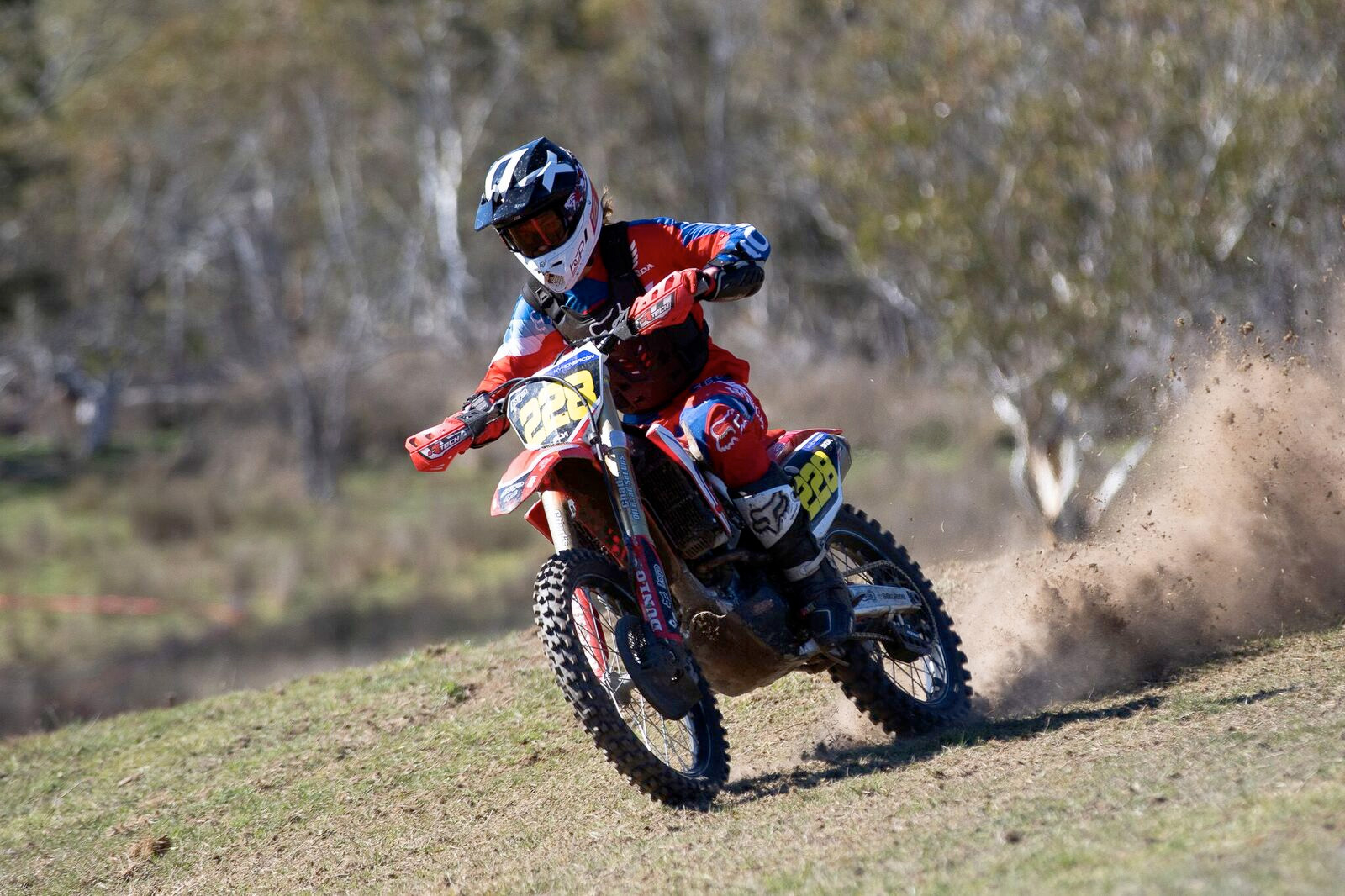 Honda's Kyron Bacon took the J4 win but with Korey McMahon second he had to settle for the runner up spot in the title race. Photo: John Pearson
J3
With championship leader Hollis still over in Tasmania with his Australian Junior Motocross duties, the battle for the 25 points looked wide open. The cross-country format puts the riders to the test, and it would be Sam Barton taking the win on his Yamaha. Barton battled through the tough conditions and the physical toll two hours takes around Omeo, ending with a time of 2:07:23.257.

Crossing the line in second position was Oscar Collins, Collins was in the mix for the lead for a lot of the race but just didn‰Ûªt have the speed of Barton. Collins would cross the line with a time of 2:07:45.205.

The final spot on the podium went to Riley McGillivray who put in a solid two hour of riding to register a time of 2:08:01.072. 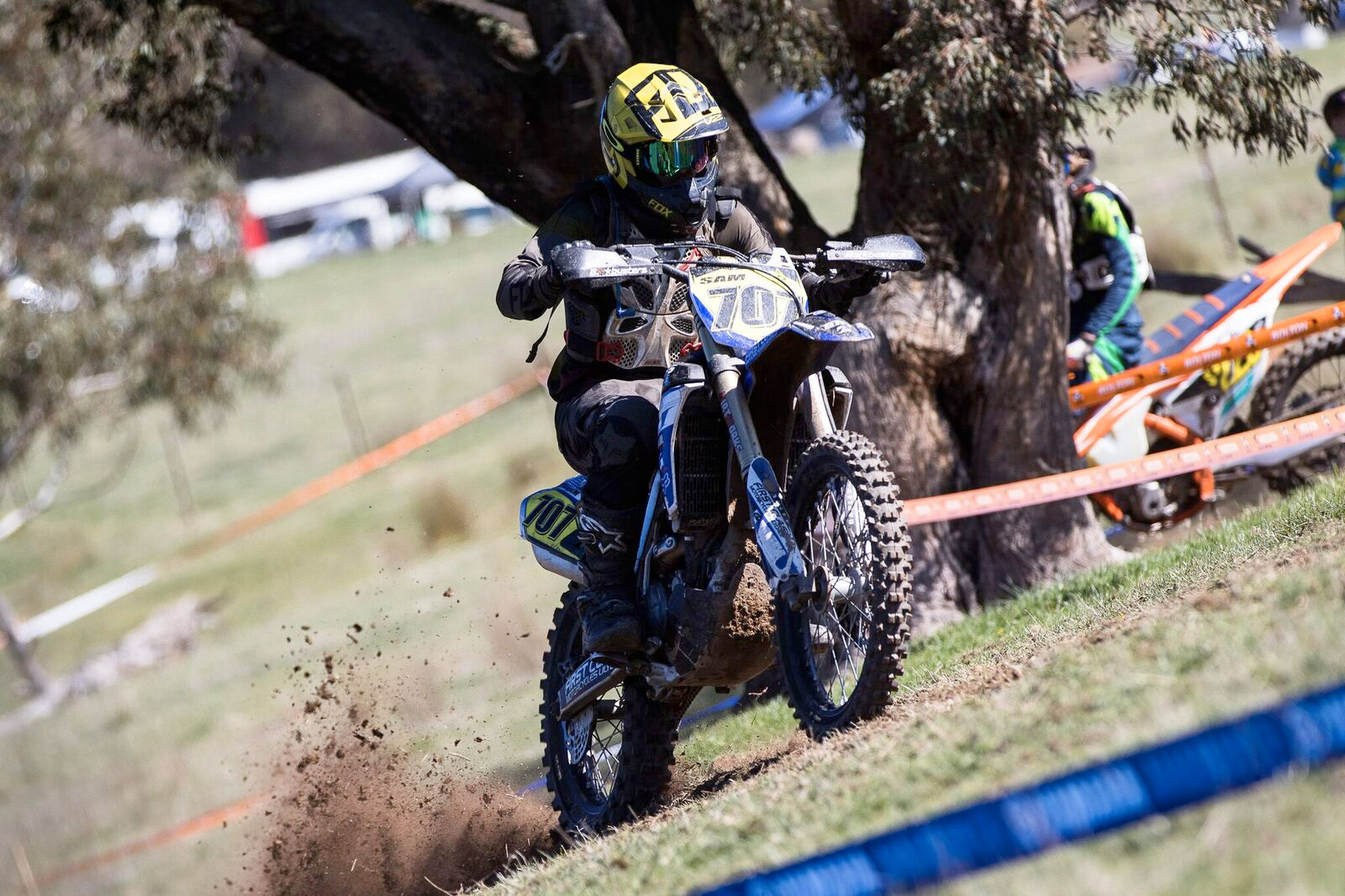 In what has been one of the most exciting classes here at AORC this season, the J2 riders certainly lived up to that again. The battle at the front of the race between Phillips and Kobe Conley was enthralling for stages of the race, but Phillips on KTM would pull away to take the win. Phillips recorded a time of 2:08:05.511.

Conley would have to settle for second, but he gained valuable points in the race for the championship that will be decided tomorrow. His time of 2:08:25.201 was enough for second.

Rounding out the podium was Zac Perry, Perry enjoyed a battle with current points leader Billy Hargy and the pair took it right to the line. They were even involved in a tangle on the last lap before they both remounted a charged to the line. Perry got the better of the battle with his time of 2:08:48.254.

Hargy had to settle for fourth with his time of 2:08:56.465 but now the attention turns to tomorrow‰Ûªs sprints with the title on the line.


The field is back in action tomorrow with sprints for the final time in season 2018 and although the Championships may be won, Milner, Sanders and Driscoll all have the chance for undefeated seasons. 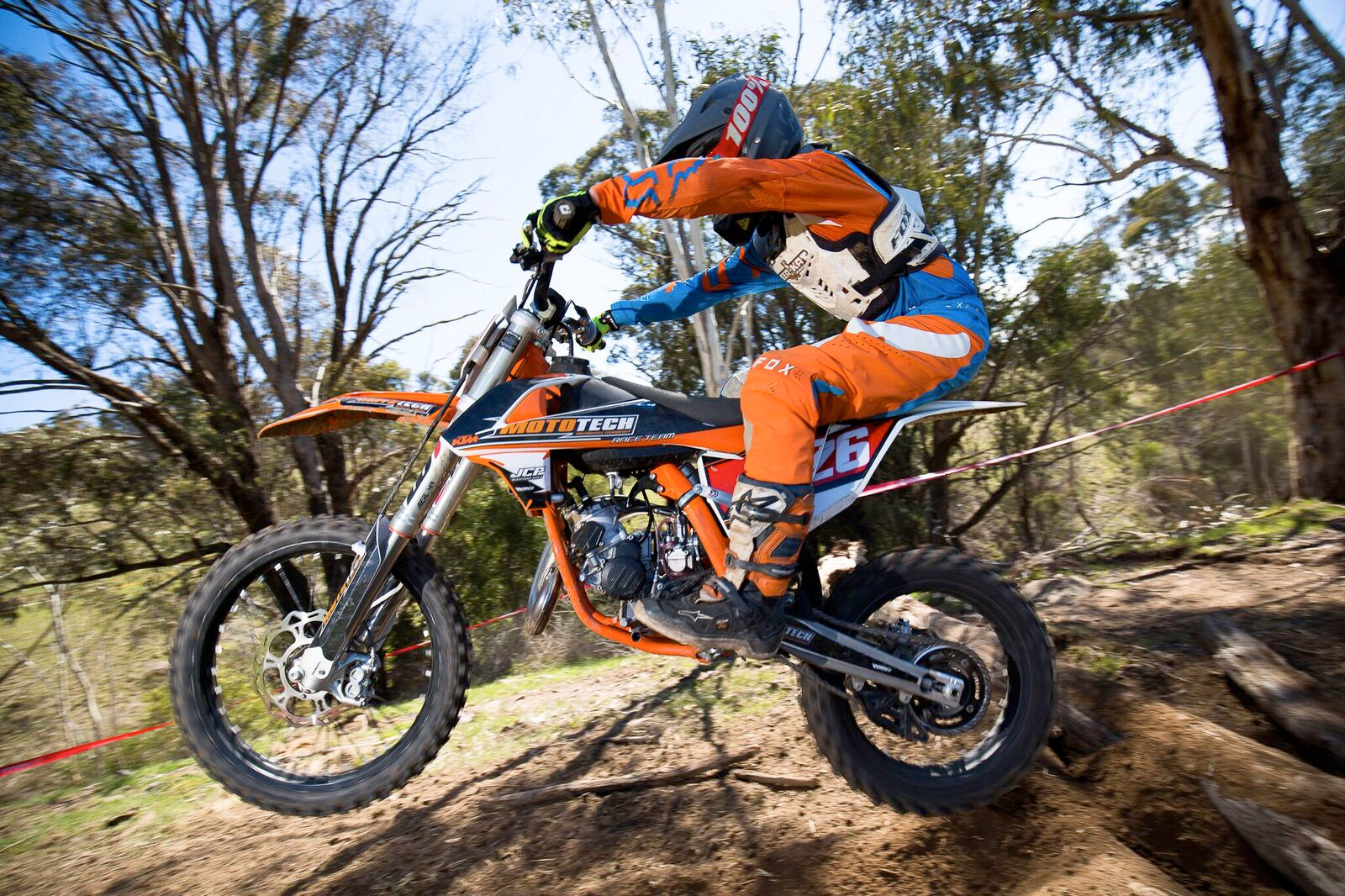