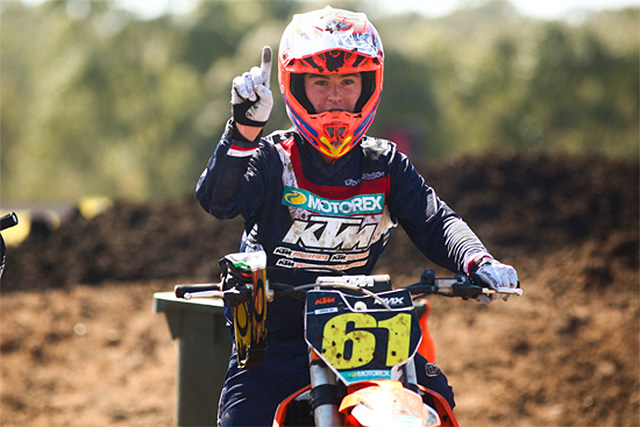 Champions crowned on final day of Horsham's KTM AJMX The final day of the KTM Australian Junior Motocross Championship (AJMX) in Horsham, Victoria, saw triumphs and tribulations as 13 national titles were awarded in what was a nail-biting day of racing.

The venue was once again graced with exceptional weather, and with the circuit at its most challenging, it provided the perfect battleground for the country‰Ûªs most elite junior athletes to go head to head for one last time.

In the final outing, Malkiewicz was crowned champion after putting on a commanding display, crossing the chequers eight seconds ahead of his nearest rival, Rhys Budd. Fabry returned to the podium for third, as Mason Semmens (VIC) was fourth ahead of Kukas. Completing the top three in the standings behind Malkiewicz was Budd and Kukas, who edged out Fabry by one point.

Junior Lites 13-U15 Years - Final 4 and 5:
In the younger Junior Lites division, Dante Hyam of New South Wales walked away with another convincing victory, positioning himself six seconds ahead of the field as they crossed the line. Queensland‰Ûªs Tye Jones finished up in second, while Noah Ferguson (QLD) defeated Liam Andrews (VIC) - who bounced back form a first turn crash - by just half a second. Jai Walker from Queensland wound up in fifth.

In race five, New South Welshman Korey McMahon rose to the occasion, rounding out the week with a victory as Hyam claimed second, lifting the title in the process. Ferguson pushed into third, followed by Andews and Walker. Overall it was Andrews and McMahon who trailed Hyam in the standings.

Female Junior Lites 13-U16 Years - Final 5:
Western Australian Tahlia O‰ÛªHare made it a clean sweep in the Female Junior Lites division to grasp the title, completing the week with a dominant 21-second victory. Tanesha Harnett of New South Wales pulled through for another consistent runner-up placing ahead of Rachael Archer (NZ), Tahlia Drew (QLD) and Roma Edwards (NZ). Harnett was second in the title hunt after a string of top results, while Archer edged out compatriot Edwards for the final spot on the podium.

125cc 15 Years - Final 4 and 5:
Race four of the older age group 125cc class saw Mat Fabry of Western Australia shoot out to the lead, holding Queensland‰Ûªs Bailey Malkiewicz at bay for the opening laps before succumbing to the pressure. He then found himself in hot water with Mason Semmens (VIC), although Semmens would make a uncharacteristic mistake, sending him down the order. Fabry secured second ahead of Jack Kukas (QLD), Semmens and Tyler Darby (NSW).

Semmens bounced back in race five to to be crowned champion, but he didn‰Ûªt have it easy as the fight for the moto win came right down to the flag with Malkiewicz, edging him by just two hundredths of a second. It was a similar battle for third between Kukas and Fabry, although it was Kukas who held the advantage across the line, while Darby completed the top five. Malkiewicz fell short of the title in second, but was able to position himself comfortably over Kukas.

125cc 13-U15 Years - Final 3:
The 125cc 12-U15 Years championship was an absolute nail-biter, with Western Australia‰Ûªs Regan Duffy topping Estonia‰Ûªs Mecio Vettik by just one point. Duffy did everything he needed to win the title by capturing the final moto victory, as Vettik struggled and slipped down the field. Dante Hyam (NSW), early leader Liam Andrews (VIC), Korey McMahon and Vettik closed out the top five. Hyam was third in the championship behind Vettik and Duffy.

Mini Lites BW 14-U16 Years - Final 5:
Queensland‰Ûªs Jai Walker charged a convincing race victory in the Mini Lites BW 14-U16 Years class, although it just wasn‰Ûªt quite enough to lift the title, which was awarded to fellow Queensland Noah Ferguson. In the final fight, it was George Knight (VIC) behind Ferguson, followed by Connor Whitney (NSW) and Kai Newbold (SA). Overall, Walker trailed Ferguson by three points, as Newbold capped off the top three.

Mini Lites BW 12-U14 Years - Final 3:
South Australia‰Ûªs Alex Larwood continued his exceptional form right to very end in the Mini Lites BW 12-U14 Years class, with another moto win in race three enough to appoint him as the class‰Ûª Australian champion. New Zealand‰Ûªs Brodie Connolly wound up in second ahead of Queensland‰Ûªs Brad West, while Blake Fox (NSW) crossed the first, although was docked three positions for jumping on a yellow flag. Queensland‰Ûªs Deegan Mancinelli ended up in fifth, as Connolly and Fox followed Larwood in the standings.

Female Mini Lites 12-U16 Years - Final 4 and 5:
It was a Charli Cannon (QLD) show once again in final number four of the Female Mini Lites, as she blitzed the field with a commanding 39-second advantage. Madi Healy of Victoria added another runner-up placing to her name, as Holli Geeves (TAS) advanced into third. Jayde Dudley (NSW) and Aimee Butler (SA) were fourth and fifth respectively.

In the final time around, Cannon shot through with yet another staggering lead, making it 32 seconds as he crossed the finish line seal up the title. Healey placed second in what was an ultra-consistent week, finishing ahead of Geeves, Butler and Dudley, mirroring the first five overall for the week.

Mini Lites SW 9-U12 Years - Final 3:
Tasmania‰Ûªs Jett Burgess-Steven captured the Mini Lites SW 9-U12 Years championship in convincing fashion, running home to an eight-second win in the final moto. Queensland‰Ûªs Jack Mather completed the race in the runner-up spot, as Ryder Kingsford of New South Wales concluded the top three. Max Miller (NSW) and visiting Thai rider Krittapat Keankum were fourth and fifth, with Kingsford and Mather ending up second and third in the standings.

Drew pulled through for victory in the final dash, but Towill proved to be too good, securing the championship by a slender seven points. Holding held on for second ahead of Towill, while Jasper Moon of New South Wales Burchell closed the top five. Holding was crowned vice-champion ahead of Drew in third.

65cc 9-U11 Years - Final 2 and 3:
In moto two of 65cc 9-U11 Years, Ky Woods of New South Wales stormed to a seven-second victory over Western Australia‰Ûªs Kayden Minear, showcasing his skills in the rutted conditions. Queensland‰Ûªs Braden Plath pushed through for the final spot inside the top three, as Jet Alsop (QLD) and Deacon Paice (WA) closed out the first five.

A race victory in the third and final moto was the nail in the coffin for Alsop, who walked away with the title in hand after putting on an impressive display to narrowly edge out Minear. Plath returned to the podium in third, as Liam Owens (QLD) and Koby Hantis (NSW) were fourth and fifth respectively. Minear ended up two points shy of the championship, finishing 10 points ahead of Plath.

65cc 7-U9 Years - Final 5:
West Aussie Seth Shackleton pieced together a super consistent week, and with a fourth in the last final race, he rewarded with the 65cc 7-U9 Years crown. The race itself was won by New South Welshman Ryder Wilson, who beat home Heath Fisher (QLD), Jackson Walsh, Shackleton and Max Stevenson (QLD) in what was a respectable display. He wound up second in the standings, 12 points clear of Fisher.

50cc Division 2 7-U9 Years - Final 5:
While it was Heath Fisher (QLD) who won the final moto of the 50cc class, it was Western Australian Seth Shackleton to clinched the title. The West Aussie talent was second in the fifth and final outing, followed by Slade Oberhardt (QLD), Max Stevenson (QLD) and Sonny Pelicano (WA) completed the top five. Fisher was second in the championship ahead of Stevenson.