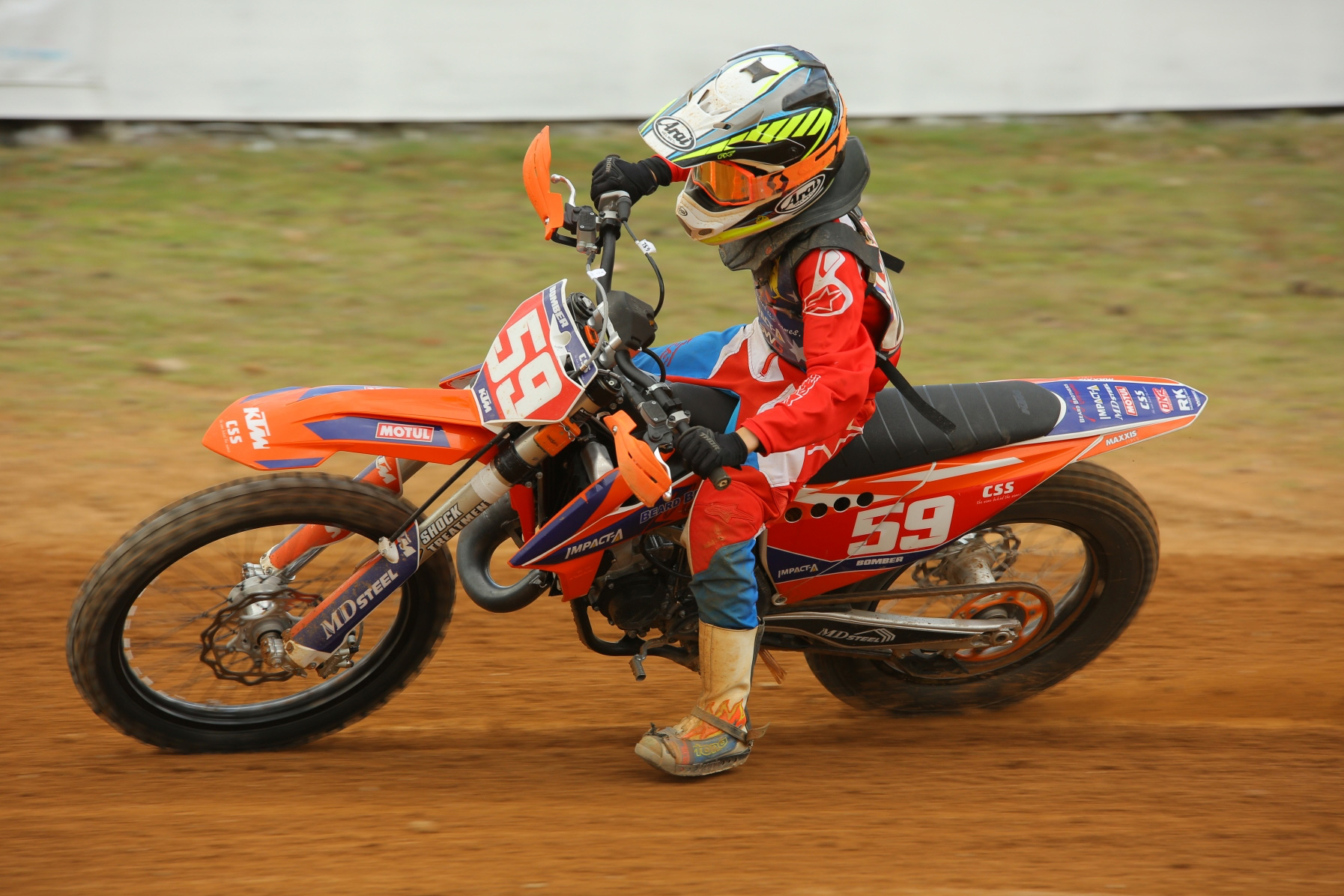 Tom Drane from Forbes both won three classes. Photo: David Lamont
A total of 11 championship classes were up for grabs when the 2019 Honda New South Wales Junior Track Championship meeting was staged on Sunday (November 17) ‰ÛÒ but there were only five riders who took the honours.

Cameron Dunker from Kurri Kurri and Tom Drane from Forbes both won three classes, Jayden Holder from Kempsey and Taylen Howard from the Gold Coast each claimed two wins while another Gold Coast rider Riley Nauta won the other class.

The performance of Dunker was remarkable as he won all five rounds in all three classes in the 11 to Under 13s ‰ÛÒ a total of 15 race wins. Some were all-the-way wins, others when he had to work through the field after not-so-good starts.

Drane had to work harder winning 11 rounds along with three second placings in the 13 to Under 16s. Drane‰Ûªs only scare was in the 2-stroke class when he fell in his opening race, but remounted to finish sixth. A lesson there for all competitors ‰ÛÒif you can remount and finish a race it means some points are gained. As it was Drane won the remaining four rounds to take the overall victory.

The two class wins for both Holder and Howard came from one straight-out final and one decided over five rounds.

The class Holder won over five rounds showed the benefit of consistency with eventual runner-up Alexander Adamson scoring three wins and a second, but a fall in his other round cruelled his hopes.

The one win for Nauta will be long remembered as he and Noah Grabham could not be split by track announcer Peter Baker as they crossed the line in the final.

The riders pulled up on the track looking around for a verdict, which went in favour of Nauta by three one-thousandths of a second thanks to the transponders! And third placegetter Sam Drane was only metres behind them.

With honours ‰Û÷shared‰Ûª between only five riders there were plenty of disappointed riders who on reflection should still be pleased with their efforts.

Among the older age brackets Luke Bush, Jayden Rodgers, Cody Lewis, Rory Hutchinson and Michael West were all prominent in the action.

Jake Paige was twice runner-up to Howard, Lachlan Russell, Alexander Adamson, Cody Wilby and Talon Cardinale were good despite the frustration of chasing Dunker and Sam Drane was left with two third placings in the two closest finishers of the meeting.

Winners of the support classes that did not attract enough entries for championship status were Lincoln Knight, Blaize Szabo and Blake Fairey.

The Central Coast Junior Motorcycle Club‰Ûªs Allen Park track at Somersby was in good condition on an overcast day and even though entry numbers were less than anticipated there was still plenty of quality on show providing top-class action.