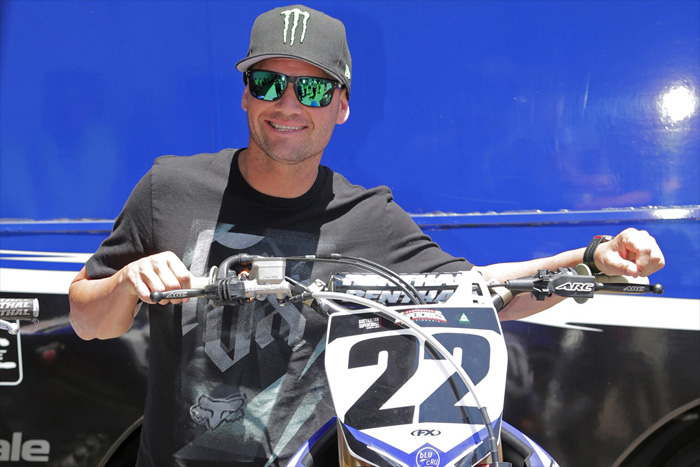 This weekend‰Ûªs (November 28/29) AUS-X Open Supercross, in which Saturday‰Ûªs racing will pay points for SX1 and SX2 riders contesting the 2015 Australian Supercross Championship presented by Penrite Oils, is shaping up to be the most mighty of dirt bike confrontations Australia has ever seen.

Allphones Arena at Homebush in Sydney‰Ûªs famed Olympic precinct has been transformed, with thousands of tonnes of top soil trucked into the venue and, in the space of less than 48 hours, sculpted into a dirt bike race track that organisers promise will be like none the sport ever seen before in Australia.

A 360Fly-by lane, Sydney.com tunnel, wheel-swallowing whoops and huge steel take-off ramp for the finish line jump will test competitors and keep the fans ‰ÛÒ who months ago sold-out Saturday night‰Ûªs event; some tickets still remain for Sunday afternoon‰Ûªs event, available now at www.ticketek.com.au ‰ÛÒ on the edge of their seats and cheering their favourite riders.

And while there will be a galaxy of stars to cheer for, headlined by local Aussie aces Dan Reardon (CDR Yamaha) and Matt Moss (Motul Suzuki), who are locked in battle for the SX1 Australian Supercross Championship after four previous rounds, American heroes Cooper Webb (Yamaha), Gavin Faith (Penrite Honda) and SX2 Championship leader Jimmy Decotis (Penrite Honda), and of course special guest, the GOAT (Greatest Of All Time), American legend Ricky Carmichael ‰ÛÒ not to mention a stacked field of international and local aerial aces taking part in the freestyle MX Best Trick contest at each event ‰ÛÒ there is one rider who will draw the loudest cheers of all this weekend ‰ÛÒ Australian Supercross superstar Chad Reed.

Reed, 33, who is a multi-time Australian Supercross Champion, has jetted home to Australia from his base in Florida to contest the AUS-X Open and strut his stuff in front of the legions of Australian fans who have followed his every move in a stellar career that has seen him conquer the world on his way to becoming one of the greatest riders the sport has ever seen.