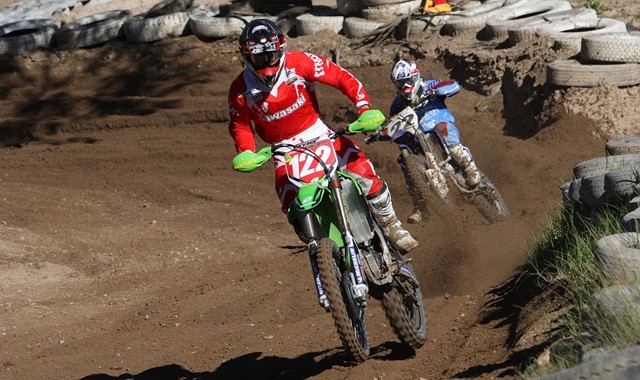 Australia's favorite son Chad Reed made a triumphant return to Australian motocross racing when he overcame a determined Daniel Reardon to claim round 4 of the Nokia MX Nationals at Newcastle today (May-20), whilst in the Pro Lites Serco Yamaha's Jake Moss laid claim to his third double win of the years to become a tear away points leader in the class. 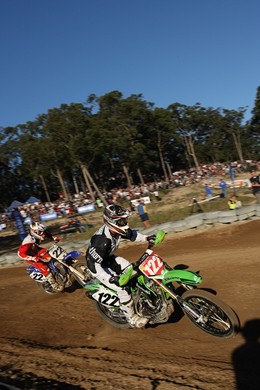 Reardon and Reed where this close for 10 laps and provided some of the best racing seen in Australia for a long long time. Photo: Garry Morrow / click28.com

Even though this was a round of the Australian Motocross Championship the championship status was temporarily hijacked by the return of Reed and the Reed V Reardon talking point. Whilst a large proportion of the pundits where pretty certain Reed would walk away with the win there was underlying feeling that Reardon would have something the former World Supercross champion.

As a result the capacity crowd where treated to some of the best racing ever seen on a perfect autumn day at a perfectly prepared Raymond Terrace motocross track when Reed and Reardon did go head to head.

Reed drew first blood when he took bragging rights in timed qualifying by taking pole with a lap time of 133.206, 1.184 seconds ahead of his cousin Team No Fear Honda's Craig Anderson. Reardon has had a monopoly on pole this year but found the going tough at Newcastle as he just couldn't string together a clear lap with the tight Newcastle circuit resembling a traffic jam, still the Kawasaki Racing Team rider logged the third fastest time 1.467 seconds behind Reed.

With the crowd all standing to attention the gate dropped on the opening moto and it was Reardon that was the clear holeshot winner, followed by Anderson and Reed. Reed quickly made his way past Anderson and set out after Reardon. What followed was an enthralling 15 to 20 minutes of racing as the duo went toe to toe, bar to bar until Reed hit the front just after the midway point. From there Reed's, speed, experience and fitness all came into play as he slowly edged away to eventually take the chequered flag by just under 8 seconds. Reed clocked the fastest lap of 133.100 with Reardon's best a 133.205. Shift Motul Suzuki's Daryl Hurley was the best of the rest fishing a whisker under 50 seconds away back in third. Motorex KTM's Jay Marmont was a further 10 seconds back in 4th.

Moto 2 turned out be a carbon copy of moto one with Reardon once again blasting to the front and fending Reed off for the first half of the race, although this time there was far more intensity and lead changing as the duo swapped places on at least four occasions. Once again though Reed found breathing room and found his comfort zone and was then just a matter of getting to the line. Reardon once again finished around 8 seconds away in second place with Hurley repeating his first moto finish of third. Troy Carroll took his Cool Air Suzuki to fourth place ahead of round three winner Cody Cooper. Reed and Reardon lapped up to 7th place. 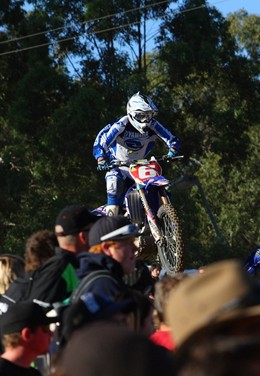 In the days overall Reed took the points ahead of Reardon and Hurley took third but the talking point and the highlight of the day was always going to be the Reed, Reardon clash. On that front Daniel Reardon certainly proved he has what it takes to run with a rider at the highest end of the sport. It will never be know how much Reed backed off after he got comfortable out in front but you can rest assured he wouldn't of backed of much and from the trackside it didn't look like much.

It is true that Chad Reed is on holiday and basically rode to give something back to his Australian fans but he is a racer and raced to win. If Reardon had of won it would have been a big blow to Reeds standing, especially in America so there was no way he was having fun day out to wave to the fans, he turned up with his race bike and raced hard, raced to win and showed thousands of his biggest fans why he is one of the best in the world. Reed also did have the distraction of thousands of fans wanting him all day.

"My greatest motivation to come home and race was definitely to compete in front of my home crowd, they have been unbelievable and I'm just really happy to have had this opportunity," said Reed.

"It was awesome to get out there and bang bars with Daniel and the boys, it is a very competitive series and there's so much talent here," Reed added.

For Reardon he had nothing to lose and everything to gain, he lost nothing and gained everything because he took it to Chad Reed, ran with Chad Reed and although he didn't win you can bet this time next year he will be on a track again with Chad Reed going bar to bar.

Beside the obvious focus of the day being on the big names in the Pro Open class a special mention should be made to Justin Carafa who was the highest placed privateer. The GMR KTM rider finished in an impressive 7th place for the day. Nathan Crawford is still the leading privateer in the championship holding down fifth spot but had an off day, by his standards so far this year, with 9th on the day. 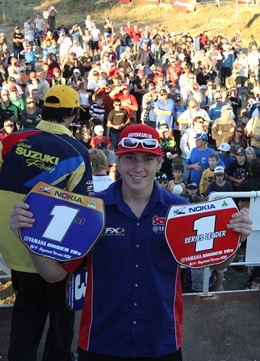 Serco Yamaha's Jake Moss once again owned the Pro Lites with the only blemish on his copy book for the day being a few laps behind holeshot winner Mitch Hoad in the opening moto and a few behind the KTM pair of Adam Monea and Michael Addison in the second moto. Once he put the holeshot winners behind him the championship points leader was in a class of his own as he cruised to two empathic victories and re-enforcing his position at the head of the points table.

Team Shell Fly Honda Racings Danny Anderson took second by a point over American Kyle Tobin. Anderson finished second to Moss in the opening moto but finished 7th in the second. With a lot of inconsistent results from other competitor it was enough for second overall on the day. Tobin was also a benefactor of an inconsistent field garnering his third place via a second and an 8th.

Some of those to fall foul where regular front runner Cameron Taylor who had a front wheel explode in the second moto after a solid 4th in the first moto. Kiwi Michael Phillips who crashed hard in the first moto but took third in the second moto. Kawasaki Racing Team's Mitch Hoad, Belmont Tools rider Michael Addison, Cody Mackie and Luke George all had impressive moments but could not string it together on the day. Probably the biggest losers of the day where Adam Monea who was a front runner on both occasions but suffered spectacular crashes leading to a points haul of 0 and Shift Motul Suzuki's Luke Burkhart who also bagged the same amount of points after qualifying second fastest behind Moss.

Moss is now more than a rounds worth of points (53) ahead of Danny Anderson. Mitch Hoad still holds down third in the standings a further 3 points behind Anderson. Although there are only four rounds down and six to go it will take a minor miracle to stop Jake Moss from winning the 2007 Pro Lites crown going on his current form.

Brenden Harrison kept the Serco name up in lights when he took a one point win in a day of close battles in the under 19's class. Harrison was a comfortable winner in the opening moto ahead of Team Seven M2R Yamaha's racing's Kirk Gibbs and Motorex KTM's Todd Waters.

Waters threw away a second overall for the day when the young Queenslander crashed whilst leading the second moto. The win then handed to Shift Motul Suzuki's Lawson Bopping. Gibbs once again finished runner up with Harrison, who himself had to come back after crashing, in third. Harrison's third earning him 45 points for the day, one ahead of the consistent Gibbs. Bopping's win helped elevate him to the last step on the podium with a two point margin ahead of the disappointed Todd Waters.

Riders will take a deserved break before heading to Murray Bridge in South Australia for round 5 of the Nokia MX Nationals on June 10.