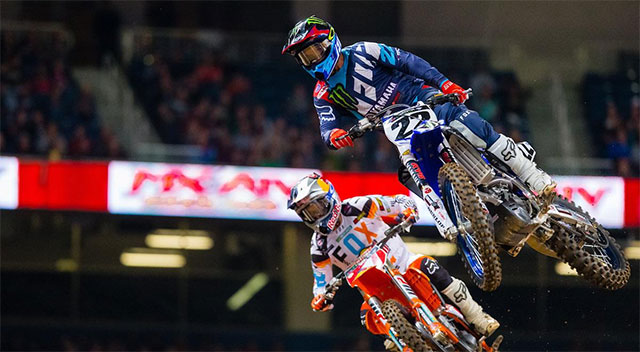 The web has been alive with comment since Saturday's 13th round of the Monster Energy Supercross championship where Chad Reed held up Ryan Dungey while being lapped in the main event.

It seems the controversy has placed the AMA in a position where it had to do something. That something is the following ruling that will cost the Australian a few points and some pocket money.

At the time Dungey was in pursuit, and closing in on, of eventual race winner Eli Tomac when he was stuck behind Reed for 2 laps. Reed held the racing line despite numerous Blue flags.

On April 1, 2017, during the 450SX main event, while being lapped by the 2nd place rider, 16th place rider #22 Chad Reed failed to follow the direction of the AMA officials indicated by the blue flag. In doing so, rider #22 did impede the faster rider‰Ûªs progress. This is a violation of rule 4.17.a

4.17 Flags and Lights
It is the rider‰Ûªs responsibility to be aware of their surroundings at all times while on track. Safety is a main priority and the riders must obey all official signals and directions given to them. Any rider failing to do so may be penalized.

a. Solid Blue Flag:
1. Indicates you are about to be overtaken by faster riders.
2. When conditions allow, move out of the fast line.
3. Hold your line (do not ride erratically) and do not impede the faster riders progress.
4. Riders disregarding the blue flag may be black-flagged at the discretion of Race Director.


The decision of the Race Director is to impose a fine of $5,000.00 and the loss of five Championship points earned in the race. All fines collected are donated to the Alpinestar Mobile Medical Unit.

Dungey made comment on the incedent during the after race press coference saying, "I just don't know why he has to get involved with me and Eli's position. If he was on the same lap, I'd understand, I think we all would, but he's a lapper," Dungey said.

"I guess I don‰Ûªt know where this attitude and everything is coming from... That guy‰Ûªs been around a long time and that much experience, you‰Ûªd think he would understand what it‰Ûªs like to be in the position that I am. But he has no respect for us and what we‰Ûªre doing, what we‰Ûªre trying to do. I have a lot of respect for the guy, still do, but tonight was a low blow.‰Û