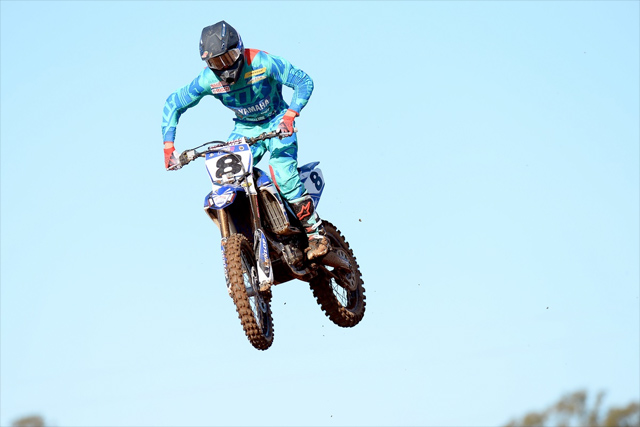 CDR Yamaha's Kade Mosig has picked up his second straight round win at the ninth round of the 2015 MX Nationals, walking away with perfect 1-1 score card at the Echo Valley circuit this afternoon.

It was championship leader Kirk Gibbs who started the day off on the right foot, posting the fastest time during regular qualifying aboard his all new 2016 KTM SX-F450, before Dylan Long then topped the time sheets in the Superpole competition, picking up five championship points for himself along the way.

When the gates dropped for racing on the tough and technical, Toowoomba track, it was Penrite Oil Honda's Ben Townley who grabbed the hole-shot with Mosig quickly working into second position before making the move into the lead.

The two leading riders set a frantic pace for the remainder of the moto with Mosig able to hold off the former world champion by the narrowest of margins at the line.

Superpole winner Long recovered from a early race mistake to finish 7th, with Penrite Honda's Cody Cooper and the Motul Suzuki pairing of Egan Mastin and Kale Makeham rounding out the top ten.

Moto two got off to an identical start to race one with Townley again leading the field through the first turn.

Monea once again showed he is one of the fastest riders in the nation when he moved into the race lead with Mosig also moving forward into second position, while Gibbs and Townley had a small run in with Townley coming off second best and Gibbs moving into third.

At the race came to the closing stages, Monea looked as though he was set to pick up the race win before he washed out his front wheel with just a lap and a half remaining in the race.

The mistake allowed Mosig who all over Monea, to sneak through and claim his second race win for the day and a perfect 1-1 round winning result.

"Ecstatic would be the word," Mosig said directly after wrapping up the second moto win. "It was a tough day, Adam was riding great and BT is a world class rider and he was on it.

"What more can you say with a perfect day, it is awesome and a massive compliment to the CDR Yamaha team." Mosig added.

Monea was able to quickly recover from his small crash to hang on to second position for the moto, with Gibbs crossing the line in 3rd.

Styke once again finished behind his team-mate in fourth, though a bit of a way back, with Townley rounding out the top five.

Monea's second place finish in moto two lifted him to second overall for the round, with Townley completing the podium at Toowomba, finishing two points ahead of Gibbs in fourth, with Styke a further three points back in 5th.

Mosig's round win elevated him into second position into the championship standings, though still some 61 points behind Gibbs heading into the final round at Coolum next Sunday.

Styke moved down one position and will need to make up 10 points on Mosig in order to move back into second position in the final standings, while Monea only sits a futher five points further back in fourth.

Top Image: Kade Mosig picks up his second straight round win, moving up to second in the championship standings.