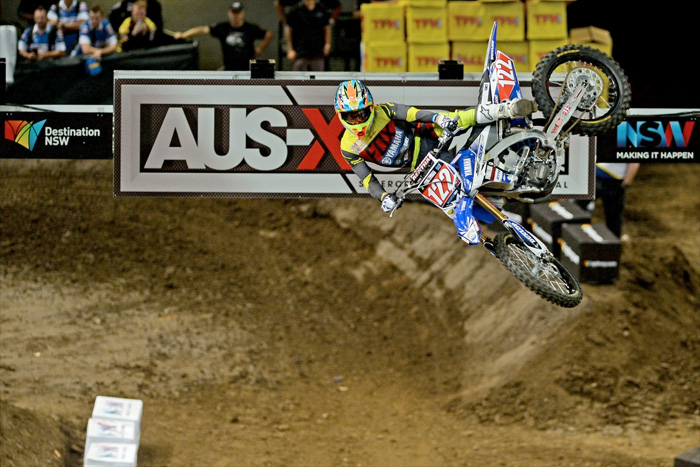 While Reed may have won the night at the fifth round of the 2015 Australian Supercross Championship held in conjunction with the AUS-X Open, it was Daniel Reardon that really gained the most in what has been a battle of attrition throughout the series.

After four rounds, Reardon and Matt Moss have been locked in battle for championship honours with just 10 points separating the pair entering the Aus-X Open round.

Reardon again came up with the goods to take an impressive third place finish in the in event, behind us imports, Reed and Gavin Faith. Combine his good points haul with a DNF from rival Moss and Reardon is now well clear in the championship chase and just needs to finish inside the top 10 at the final event in Melbourne next week to secure the 2015 Australian SX1 Championship.

‰ÛÏI got off to a great start in the heat tonight and had a confidence boosting win. I thinks it‰Ûªs important to set a good tone early at events like this and it also gives you a good gate pick for the main event.

‰ÛÏBecause of the indoor style track, there were no pit boards allowed so I really didn‰Ûªt know what was going on behind me and things were pretty hectic in the opening laps of the final. It wasn‰Ûªt until I saw Matt had crashed and not re-entering the race that I knew what had happened.

‰ÛÏThirds not great, but it‰Ûªs just what I needed for the championship so my goal is to keep doing what I‰Ûªm doing and finish the last round strongly,‰Û